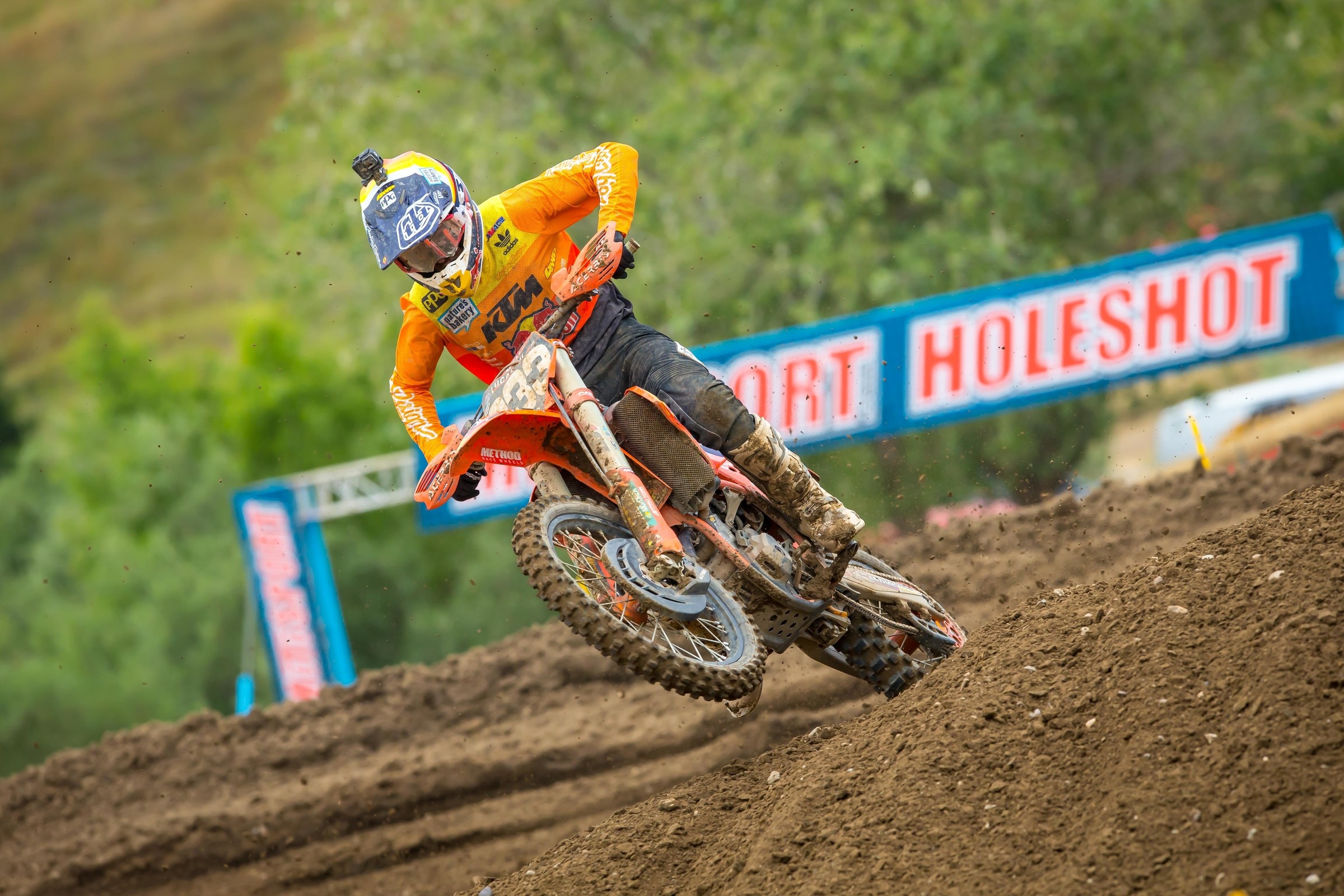 Redux News and Notes From Hangtown

The last time Roczen earned an overall in the Lucas Oil AMA Pro Motocross Championship. He went 1-1 at the season finale at Ironman.

Finishing positions for Australians Hunter Lawrence (11-12 finishes) and Wilson Todd (15-9 finishes) in the 250 Class. Both were making their U.S. pro debuts.

Place finish for Australian Todd Waters in his U.S. debut in the 450 Class. The former Grand Prix rider went 12-13 on Saturday.

Place finish for Derek Drake in the 250 Class, who made his pro debut with Troy Lee Designs/Red Bull KTM, finishing 10-25.

Place finish for Jake Masterpool in the 450 Class at Hangtown. He was the highest finishing non-factory rider, finishing 13-11.

“I’m absolutely stoked. All day, we were on it; qualifying was great, got the first moto win and then the overall. I honestly didn’t think it would go that well because I felt like I had more in the tank and it’s hard to gauge where you’ll be at the first round. What we did today was very important to me, the team and our journey. I didn’t get the best start in the first moto but was able to make some moves early to get out front and have a clear track. We were all hoping we could get one moto in without the rain, so that was great. The second moto was tough and those types of conditions can backfire on you so quickly. Eli [Tomac] and I had a good battle in the beginning. We kind of yo-yoed back and forth. I had some sloppy parts out there though, so I just took it extra easy toward the end and didn’t want to push the envelope to risk a mistake and miss the overall. This is such a great way to start the season, and I can’t wait to keep the momentum going.”

“This win has been a long time coming and it feels really good. I’ve been with Ken for a while now and have seen his highs of 2016 to the lows of all his injures, so to see him back on the top step is unbelievable. I felt like we were watching 2016. He was riding with confidence and aggression, which was awesome. It’s a long season but we’re going to enjoy this win and hopefully collect more this year.”

“I was super sore after my crash in practice but I tried to regroup and get as better as I could before the motos but the first moto was tough. The feeling was not good and the start was not there, so I was battling with myself, basically, and then the track—I couldn’t find a good flow or rhythm. The second moto was better but it was a very disappointing outcome for me as I’ve gotten second the last two years here. Hangtown is always tough, so we know where we are now and it can only get better.”

“I haven’t been able to ride too much and this was the first day doing a 30-minute moto so I think it was a good day. I just wanted to get through it, let alone be in the top 10 all day, so that was nice. In the first moto I got a good start but got shuffled back to eighth. The second moto it was really coming down. It was difficult on my wrists for sure. We have some work to do but I’m glad to get through the first one and wasn’t even expecting a top 10. I obviously want to be up there, I just know it will take some time. We’ll put in the work.”

“It was a tough day. My starts were there, and I rode strong both motos to leave here with a top 10. We have a few things to work on and I’m looking forward to another good weekend at Pala."

“The opening round had its ups and downs for sure. I think I qualified pretty good for not having raced an outdoor in almost two years. I was a little nervous going into the day and anticipating the rain. I was happy we were able to get at least one moto in before the storm actually rolled in. I was also happy with how I rode. I felt like I managed the race well and had more energy at the end of the moto than I normally do. The second moto was tough; I fell way too many times and just didn’t have very good luck. If there was a way to build some more skill for muddy races then I would but the only time we really get to practice that is in race situations. Moving forward I think I know what I need to work on and that will help set some additional goals to push through the season.”

“It was a disappointing day for Cole; he rode solid in the first moto but the conditions in the second race didn’t play in his favor at all. He’ll regroup and head to Fox Raceway strong.”

“Hangtown did not go as planned. I was really looking forward to starting the outdoors off well. I qualified ninth fastest, but had two rough motos. It’s all mental for me right now. I have to crack the code and learn what makes me tick again.”

“Not what I wanted, just didn’t feel super comfortable all day. The good side was that my starts were pretty good, but I definitely wish I could have stayed up there a little better. Had a quick crash in moto two and that cost me, but the conditions were pretty tough. It’s okay though, we scored good points, and we will put in the work and come out swinging for round two this weekend.”

“Had a crash in the opening laps of that first practice which tweaked my bike up so my qualifying wasn’t that great. Got a good start first moto and then ran into some issues just before half way and it took a little bit to clear up. Also had a close call with my teammate! [Lawrence]. Ended up making a couple passes late to get sixth. I didn’t get a great start second moto but made a bunch of passes early. I caught that lead group, not the leader, but the podium guys, but I went down every time I got close. I ended up going down four times in that moto! I really wasn’t happy about that because I felt like I was riding the track well for how gnarly it was, I just made too many mistakes. Sixth overall on the day which is my best Hangtown result yet but I should be better than that!”

“I was very happy with my second-place finish in the second moto at Hangtown. Qualifying and my first moto did not go well at all. I was struggling to find the comfort needed to hang it out on the bike. A couple of crashes didn’t help things. Huge props to the team, as I feel we made great changes throughout the day. I’m really bummed to be in a points deficit to start the series, but I feel that we can be up front from here on out.”

“Alex Martin got better with every lap. He crashed on the first lap of the opening moto trying to go around people. He was way back and came through the pack, only to crash again. He fought hard. A-Mart and the bike looked really fast in the second moto. He had a good start, made moves early in the race, and put himself in second.”

“This year has been nothing short of a struggle for me so to just get through the day felt so good. I have a way to go to get where I want to be but being able to get a top 10 overall was a good start. First practice I was far off but we changed my bike setup after and felt way better second practice. First moto was a bit of a struggle but we got through it and had a better second moto. I’m just happy to be back at the races and looking forward to improving each weekend.”

“It was okay, just stayed warmed up and took some pain killers to be ready for the second moto. Tough first weekend at Hangtown, but despite the race results I’m happy with where I’m at. There were lot of positives, speed and fitness is there just my starts let me down this weekend forcing me to take a lot more risks on a track with a lot of lines but one main line. I was taking blind lines and just more risks in general, and that’s not the best thing especially when it’s muddy. Moving onto the next one. Can’t wait to go racing next weekend at Pala!”

"I'm a little disappointed with how things went in moto two, but I'm happy to be leaving without any injuries. After qualifying fastest and my top-10 finish in the first moto I was feeling really confident, but the rain and mud proved to be my toughest competitor and caused me to make some big mistakes. We'll regroup this week and be back next weekend to fight again.”

“The track was difficult today, but it felt good to be back racing the young fellas out there again. I had a good first moto and felt really good about things, but I had some issues with my goggles in the second moto I and couldn’t really see so things went south quickly. I had a pretty hard crash and I just couldn't continue, unfortunately. I'm going to check in with the doctors this week and make sure everything is okay, and just hope to be back on the line next weekend.”

“We made some progress as far as bike setup. Really, the results don’t show how good I felt throughout the day. Qualifying didn’t go well. The track was flat and everybody was going fast. I had a decent start in the first moto and was too timid in the opening laps. Still, my fitness was there. I had a really good start in the second moto and struggled with vision and went backwards.”