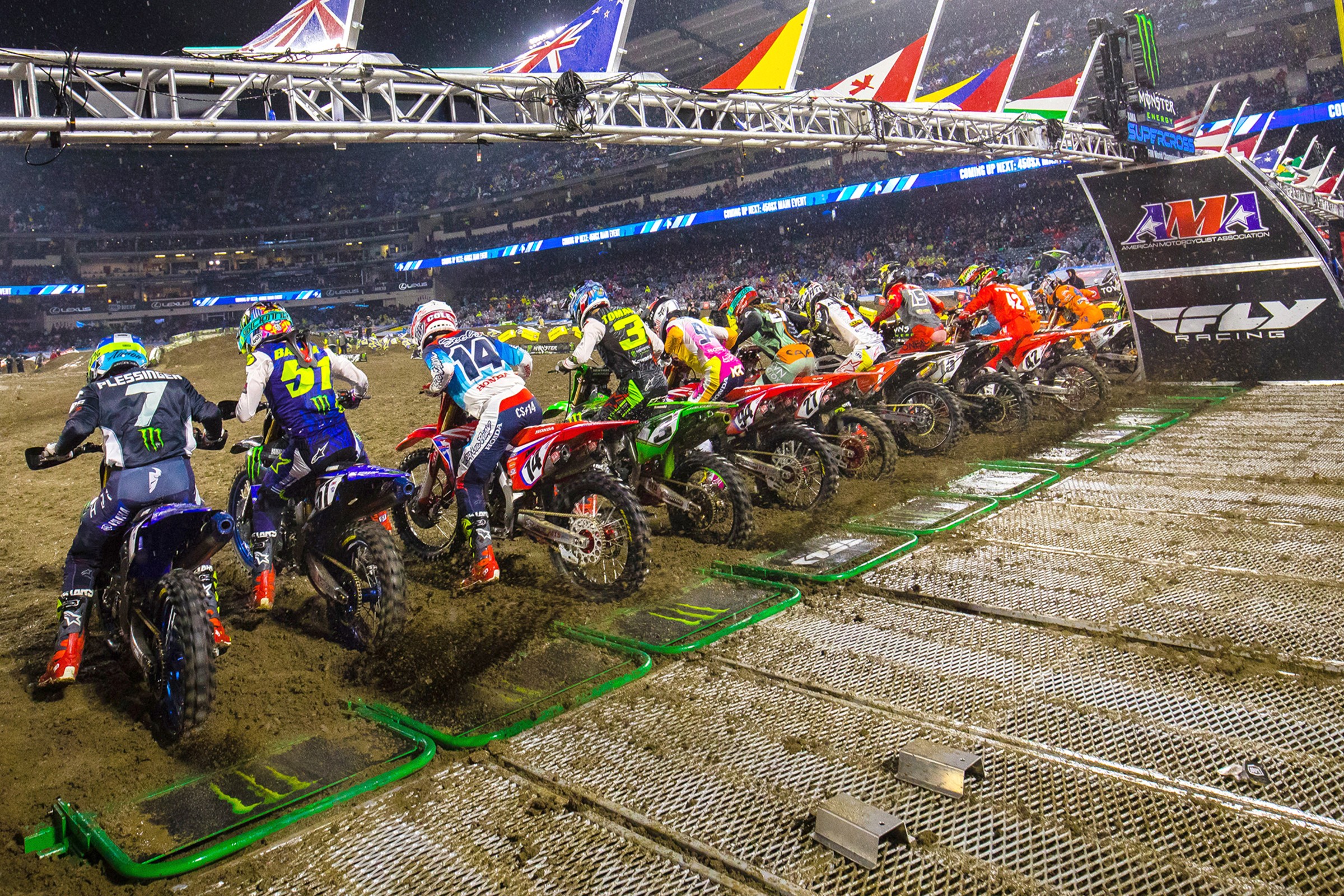 If you’re a racer you’ve probably grown up starting on either dirt or concrete. After all, what other surfaces are there in amateur racing? In Monster Energy AMA Supercross however, racers launch off a completely different surface—a metal grate. But why? After so many years of dirt starts, why change it up? Turns out there are several reasons why this unique starting surface is now the supercross standard.

The metal starting grate was first used at the Monster Energy Cup in 2013 when the race featured an elevated start. Using dirt on the elevated platform was ruled out, and the grate, which was something Feld Entertainment had been looking at already, was the solution. The grate continued to be used at the Monster Energy Cup several years after that too, including the time the start gate was at the very top of the stands. An added bonus was that it eliminated any roost getting launched over the edge of the stadium and landing on unsuspecting people outside far below. And, since everyone is starting on the same material, it serves as an equalizer.

“From a racing standpoint, everyone’s starting on the same surface. We wanted an even playing field for the guys on the gate, which was the main driving force, the reason we started discussing it in the first place,” said supercross senior director of operations Mike Muye. “But an additional bonus is that before, there was a rut behind the start gate, and when they would hit it, it would kick the back tire up and over the start gate and into another rut, so having a grate alleviates that.”

Launch equality isn’t the only benefit, either. Having a metal grate reduces roost on the start gate, which gives track designers more freedom on where they place the start. The start in Seattle, which was right up next to the stands, is a good example of that.

Muye says while some riders love it and others don’t, most of the feedback has been positive since bringing the grate to Monster Energy AMA Supercross three years ago. It’s continued to evolve too, and this season it’s different than the gate in previous years.

“Last year we had a whole different section of grates. The first iteration we sent out to a few of the test tracks and had the riders test and sample them,” said Muye. “Then we built them and everything seemed to work. But over time we realized they needed to be better. They had a bar down the center and the bar didn’t allow any flexibility. The teams told us that if we had two bars and let the tires run down the middle it’d alleviate some issues. What we have now is the second edition, and everyone’s been really happy with them from what I’ve heard.”

So there you have it. The metal grate adds more options to track designs, equalizes the playing field, and keeps roost out of your beverage.