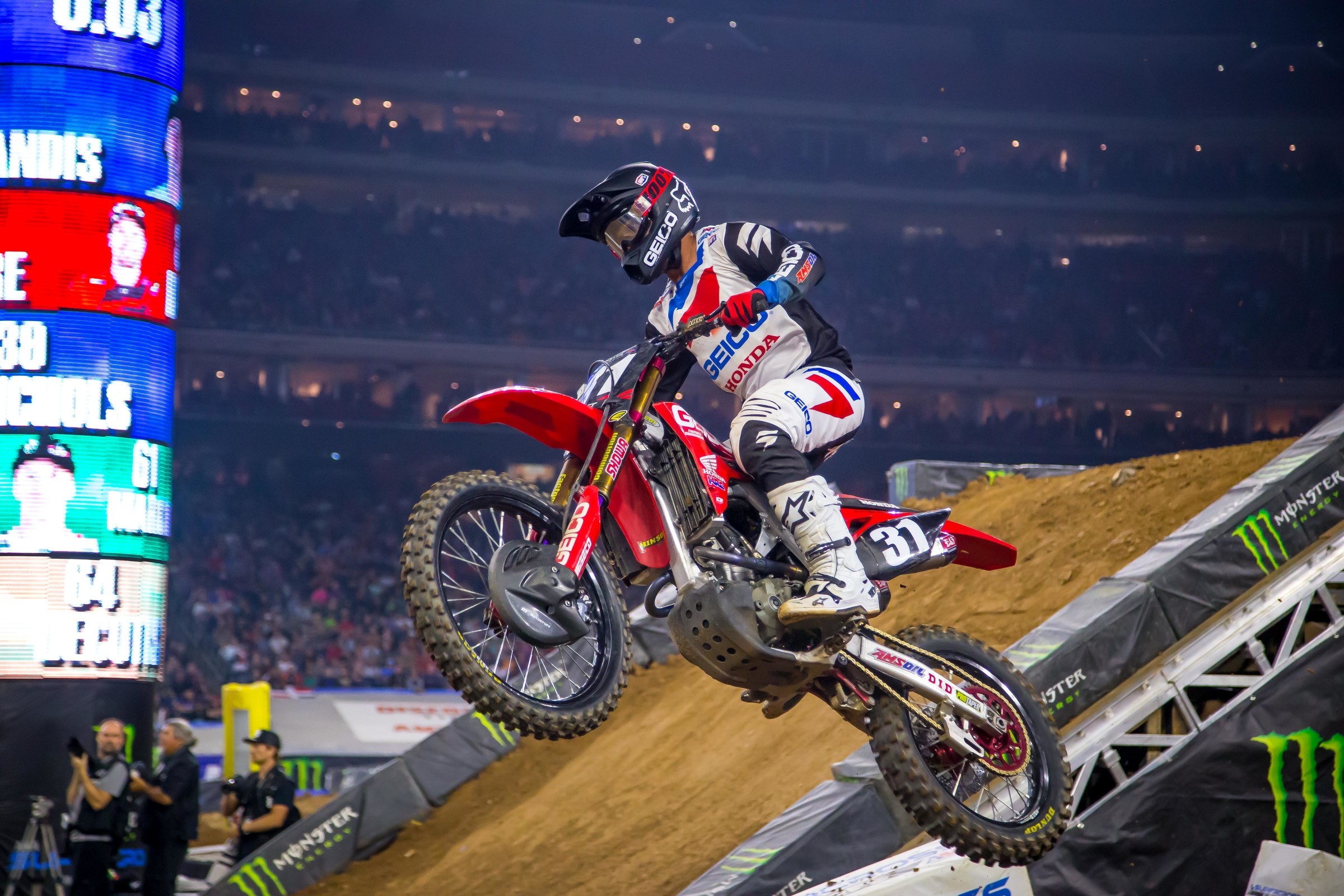 Redux News and Notes From Houston

Wins on the season for Red Bull KTM's Cooper Webb following his victory in Houston. His six wins are the most in 450SX.

Finishes inside the top two through eight 250SX West Region rounds for Ferrandis.

Rounds between top-10 finishes for Rocky Mountain ATV/MC-KTM-WPS' Justin Bogle, who finished in a season-high fourth at San Diego and seventh in Houston.

After winning the first 450SX main event in Houston, Honda HRC's Ken Roczen went down on the start in the second main event and returned to the pits shortly after limping back to his bike. Roczen returned for the third main event and finished eighth. According to the team, Roczen sustained a toe injury in the crash.

“The first main event tonight was seriously so good! We grabbed a great start and got out front right away, pulling a 10-second gap on the rest of the field. It was amazing to see the checkered flag before anyone else; unfortunately, it was only in one main," said Roczen in a statement. "In the second one, I got tangled up with Dean’s [Wilson] rear wheel and went down pretty hard. I smashed my toe and originally thought I had an ankle injury but luckily that wasn’t the case. My bike was also so bent up after the crash. I got checked out and it actually started to feel better, instead of worse, after 15 to 20 minutes. That was good but my toe was still in a lot of pain. Luckily I was able to just jump back on the bike and do what I could in the third main, salvaging an eighth-place and getting 10th overall. It’s not really how we wanted to end tonight, especially with how well the day and first race went, but again we’re healthy and moving on to the next one. At one point, it will come."

Tough night in Houston for the Monster Energy Factory Yamaha squad. Josh Grant, who is filling in for the injured Aaron Plessinger, made his first main event with the team (he failed to qualify in Seattle) tweaked his neck in the second main event when he over jumped a triple. He only completed seven of 16 laps and did not line up for the third main.

Meanwhile, Justin Barcia went down hard in the whoops in the second main and did not return. According to the team, Barcia had the wind knocked out and aggravated a previous shoulder injury.

“Houston was another tough one. The day started off on the right foot with both guys excited looking forward to the Triple Crown event,” said team manager Jim Perry in a statement. “Practice was challenging, however the team made some adjustments and we were hopeful going into the night program. Unfortunately, the night ended in the second main event for both Justin and Josh. It was not the way the team wanted to finish, but we will regroup and look ahead to the inaugural Monster Energy Supercross event in Nashville, Tennessee, next weekend."

Racer X: You’re doing great this year. You’ve got more wins than anyone else and you’re leading the points. But even when you’re not winning races, things are still going well. Like last week in Seattle, where you lost seven points to Marvin Musquin, but he was penalized seven points. Is there a feeling that things are just going your way this year?
Cooper Webb: For sure, and I think you have to have a little luck on your side to win a championship. You have good nights and you have bad nights, and it’s just racing. It’s how the world goes around. It’s a long season, and I know it sounds clichéd, but anything can happen. Every weekend is a new opportunity and it’s crazy how fast things can change. For me it’s been a great year. Six wins is unbelievable and even last weekend, getting a fourth, in the whole grand scheme of things, fourth is still great.

Last year you would have been pumped with it!
Yeah, exactly! But my goal now is to be a contender and I believe that I am. It’s nice to have that mindset and hold yourself to the standard of being up front all the time.

“We landed just shy of the podium tonight. This quick, back-to-back Triple Crown race format can be challenging, especially when you don’t get the starts you’re hoping for. I put it all out there tonight; the crew and I will get back to work this weekend and hope to turn it all the way on for these last few rounds. We’ll use what we’ve learned from tonight and apply it to next week’s race in Nashville.”

“Tonight was pretty good. I finally finished in the top five, which is where I feel like I should’ve been all year. The way things have been going so far have been frustrating, and it’s hard to explain; the toll the injury took on me last year was a lot more intense and in-depth than I thought it was. It’s been a long road to get back to here but I feel like I’ve had speed all year, I just haven’t been able to put it all together. The results haven’t been translating into how well I think I really have ridden most of the year. It feels good to finally break into that top five and run up front with those guys in the first two mains, relatively easy, too. I know it’s not a traditional 20-minute main but it felt like it was coming to me pretty easy, so that’s definitely a confidence booster heading into the final rounds. It’s a bummer it’s taken this long to come around, but I’m happy it did and we’re going to keep working forward.”

“After battling the flu all week, I definitely feel like I put everything I had out there and feel proud of what we were able to still accomplish. These last few weekends have been some of my best this season, and I feel like my KX450 is just getting better as time goes on. We were able to earn a few more points and I still have four more chances at grabbing that podium spot.”

“Tonight was a big test for me. Yes I lost points and I am not happy about that, but I think I did my best to keep my composure to not make a bad situation worse. It kills me that I made the mistake in the second main, and the third main event wasn’t my fault, but I can’t dwell on this. I have to learn from it and move on. We get a week off to think about it - not sure if it's good or bad - but we’ll be ready when we come to Denver in two weeks.”

“Houston had lots of positives again for me! My starts were awesome but then something happened each time in the first two races. Unfortunately, the first main, I had the holeshot but then I hit a tuff block and went down, then in the second one I got pushed off the track into the wall. I had to come from last in the first two mains, but our speed was there, and then the last race was solid. I ended up going 9-6-5 for sixth overall. Definitely seeing improvements every weekend!”

For more gifs from the weekend, visit Exhaust.