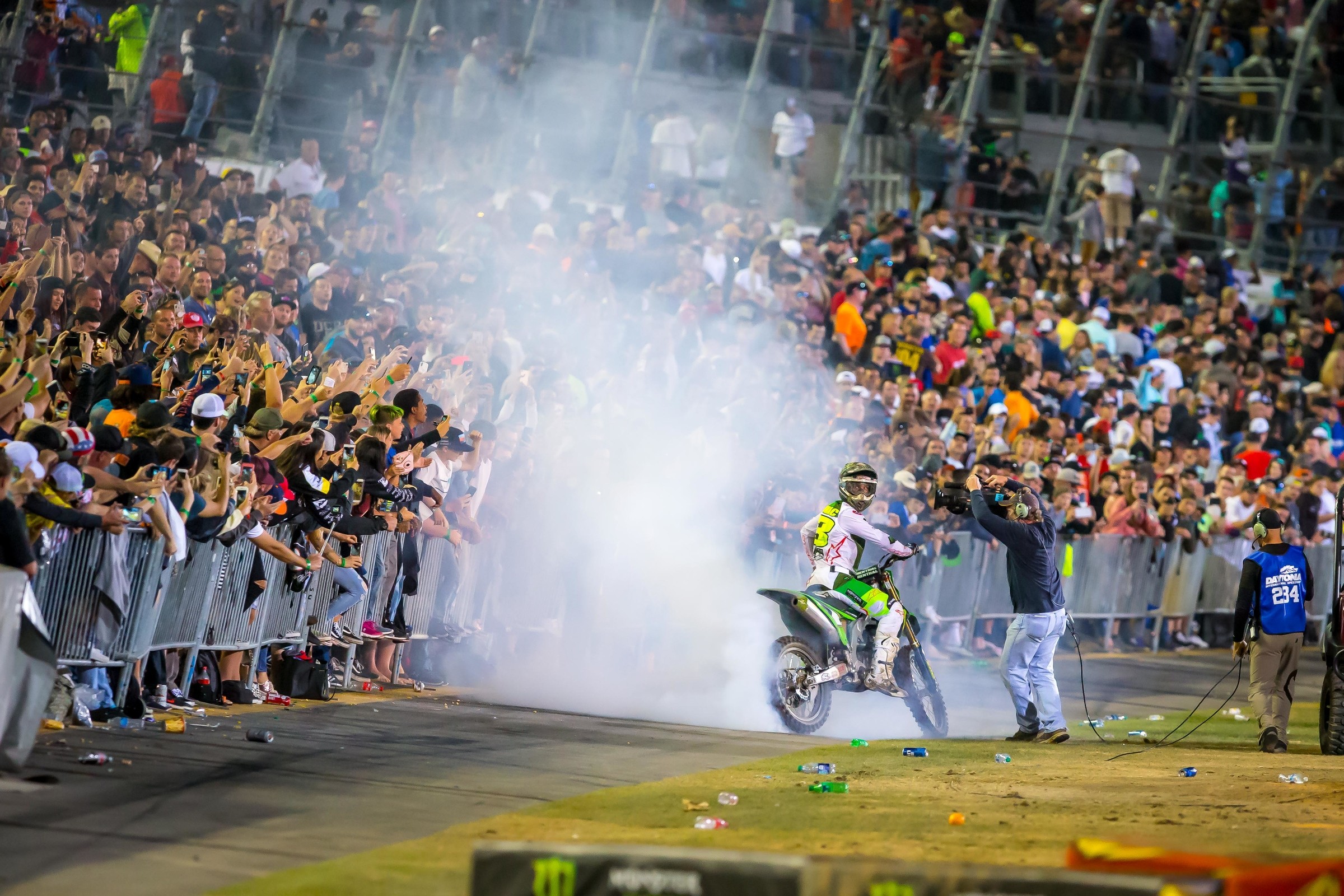 Man, what a night! The great racing just continues to happen—in both classes! Tonight, we saw the Kawasaki sweep, as both Monster Energy Kawasaki’s Eli Tomac and Monster Energy/Pro Circuit Kawasaki’s Austin Forkner both claimed the overall in their respective classes. Tomac, who had been struggling early in the day with the long rhythm section, had it figured out when it came time for the night show and was able to earn his third Daytona victory in the premier class.

The #3 grabbed the holeshot in the first 450SX heat and lead all laps as he cruised for an easy victory. After a start within the top five in the main event, Tomac worked his way through several riders before battled Blake Baggett, Marvin Musquin, and Cooper Webb, for the top spot. Eventually, Tomac was able to get into a groove and take off. We know that the last two years, an Eli Tomac win has resulted in more wins that followed, but that hasn’t been the case this year. When Tomac won in San Diego, he followed it up with a sixth in Minneapolis and a 12th in Arlington—where he went backwards after leading the field. And following his somewhat dominate performance at Detroit, where he made his way through the pack and tracked down the leader, he followed it with a in sixth in Atlanta. Now, tied for second in the 450SX points standings, is when Tomac really needs to go on a run. But will he? What has happened this year that hasn’t resulted in the dominate performances back-to-back-to-back like we are used to seeing? In the post-race press conference, Tomac said his ups and downs depend a lot on his starts.

“I mean one thing is just putting yourself in the right position off the get-go,” Tomac said. “Tonight, I just got better starts: holeshotted that heat and then was right there top three in the main. So just being there in the heat race…Last weekend I buried myself in the main and it wasn’t good enough, I wasn’t able to come up through the pack like I was the week before. So the past couple of weeks it’s been a position thing.”

Tomac battled Musquin, Baggett, and Webb for the top spot, but several times we saw brief position swaps. At one point, Tomac had just passed Baggett in the sand section and Baggett then uses Tomac’s own line against him on the next lap to reclaim his spot. We saw numerous crashes and pile ups in the sand section, which included a180-degree left-hand turn it a straight sand section followed by a 180-degree right-hand turn into a rhythm section. We also saw several passes made throughout the sand section—so this part of the track was either used effectively or it got the best of the rider.

“It [the sand section] was a spot to pass, so it was nice,” Tomac said. “I would say earlier in the day, the majority of the time we were using the inside but once we got racing, the outside got opened up and that was good. In the main actually, I kind of made—I’ll just call it a dork mistake—left the door right back open to Blake [Baggett] there. The outside was faster if you were in the clear air, but I just left that open. But yeah, it was good we were able to make a couple of passes in it, as long as your goggles stayed clean."

With the various types of dirt used in the track, parts of the track deteriorated in different ways. Some sections had ruts the width of the track, while others had simply one line. Musquin said the way the track was built caused the race to be even more difficult, on top of it following the Daytona-style layout.

“The right side was more hard-packed and the left was super soft and rutted. It’s definitely been gnarlier for sure,” Webb said—to which Tomac agreed.

Unlike Tomac, Webb has several of his wins followed by more wins. His A2 win resulted in a win in Okland, and his win in Minneapolis has resulted in a win in Arlington. Webb has held the red plates for several rounds of 2019 now, and he has been in command of the class for a majority of the season. But still, he remains humbled, even on a night when he finished in second.

“That’s my goal, is to come out each weekend and do the best I can and try to be up front,” he said. “Once you get the taste of victory, you want it all the time. So you know, for me it’s pretty easy: I got beat tonight, there’s stuff for me to work. That’s what I think keeps me motivated and in the moment and just taking it weekend by weekend and doing it that way.”

Troy Lee Designs/Red Bull KTM’s Shane McElrath, who rode his 250 SX-F in the 450SC class, finished in 12th in his first appearance in the premier class. Monster Energy Yamaha Factory Racing’s Aaron Plessinger had a bad get off in the long rhythm and immediately favored his right ankle. Plessinger was five laps into the main event, running in eighth, when he came up short on a jump. He made his way off to the side of the track and was eventually taken off the track by the medical staff with an air cast on his right foot. Several hours after the race, Plessinger posted on his Instagram that the crash resulted in a broken heal.

In the 250SX East Region Class, Austin Forkner did what we have seen him do in all of the East Region races of the season: set sail and finish with a multiple second gap between the second place rider and himself. But this one wasn’t as smooth for Forkner, who did get the holeshot but was passed early in the sand section by Kyle Peters and Justin Cooper. Forkner was looking sketchy in the long rhythm section all day—like he has so far in most of the morning practices—but when it came to the night show, man did he figure it out.

“I mean, the start helped and doing that big rhythm every lap and not making a mistake on it cause it was easy to mistime it and then the whoops were also destroyed,” said Forkner on what made the difference for him tonight. “So basically that whole straight right there was really critical that you got that clean. I feel like that was the difference for me, was just trying to eliminate mistakes and I mean I think I made some little ones, but I didn’t make any big mistakes in the main, so that was what did it.”

Justin Cooper, who was battling with Forkner early, said a small slip up early on and mistakes throughout the race messed up his chances of finishing higher.

“Well we got a decent start and was kind of a three-way battle for the lead early on,” Cooper said. “And I made a really big mistake in the long rhythm so—almost actually went down—scared myself a little bit and put me back off the two leaders. It was a long race, I made a couple of big mistakes and they added up after a little bit and I kind of lost touch with those two guys.”

Cooper and Chase Sexton both credited Forkner for his execution on the night. “Austin [Forkner] was probably about four seconds in front of me and I just kind of stayed there for the rest of the race,” Sexton said. “Track was gnarly, it was easy to make mistakes and I just tried to be consistent. Austin rode really well, he didn’t make any mistakes, so all in all, it was a good race.”

While the track changed throughout the 250SX East Region main, it was more gradual than for the 450SX main—which was basically starting on the tough track the 250SX main ended on. But, Sexton said he noticed the track was changing every time that he got onto the track.

“I almost feel like every time we got onto the track, it got softer, from practice all the way through, he said. “It just kept getting dug out. When I went out for the heat race, it just felt a lot softer than rider in practice and yeah, for the main event it just kept getting deeper and deeper.”

“I’d say it started out pretty smooth in the heats and then it just broke it down from there,” Cooper said. “Every lap, the lines were getting deeper. We were like of taking the same lines out there, like there was three main lines in each turn and they were just getting dug out each lap. The whoops got really tricky, it was kind of like goat-trailing, you kind of had to hop and skip through there. Yeah, each lap was getting tougher, the faces were going away with the ruts and it was just almost down to the footpegs so you almost had to watch at the end of the race what ruts you were taking out of the turns.”

The sand section also caused a lot of issues in the 250SX.

“Every time we went out, it felt like there was deeper ruts and the track was just gnarlier," Cooper said.

Ryan Sipes, who competed in his first supercross since 2013, finished in 14th overall, but his weekend isn’t done yet—Mr. Versatility  will compete in the Grand National Cross Country (GNCC) Series Sunday at the Wild Boar in Palatka, Florida, and on Thursday, he will compete in the American Flat Track Singles class.