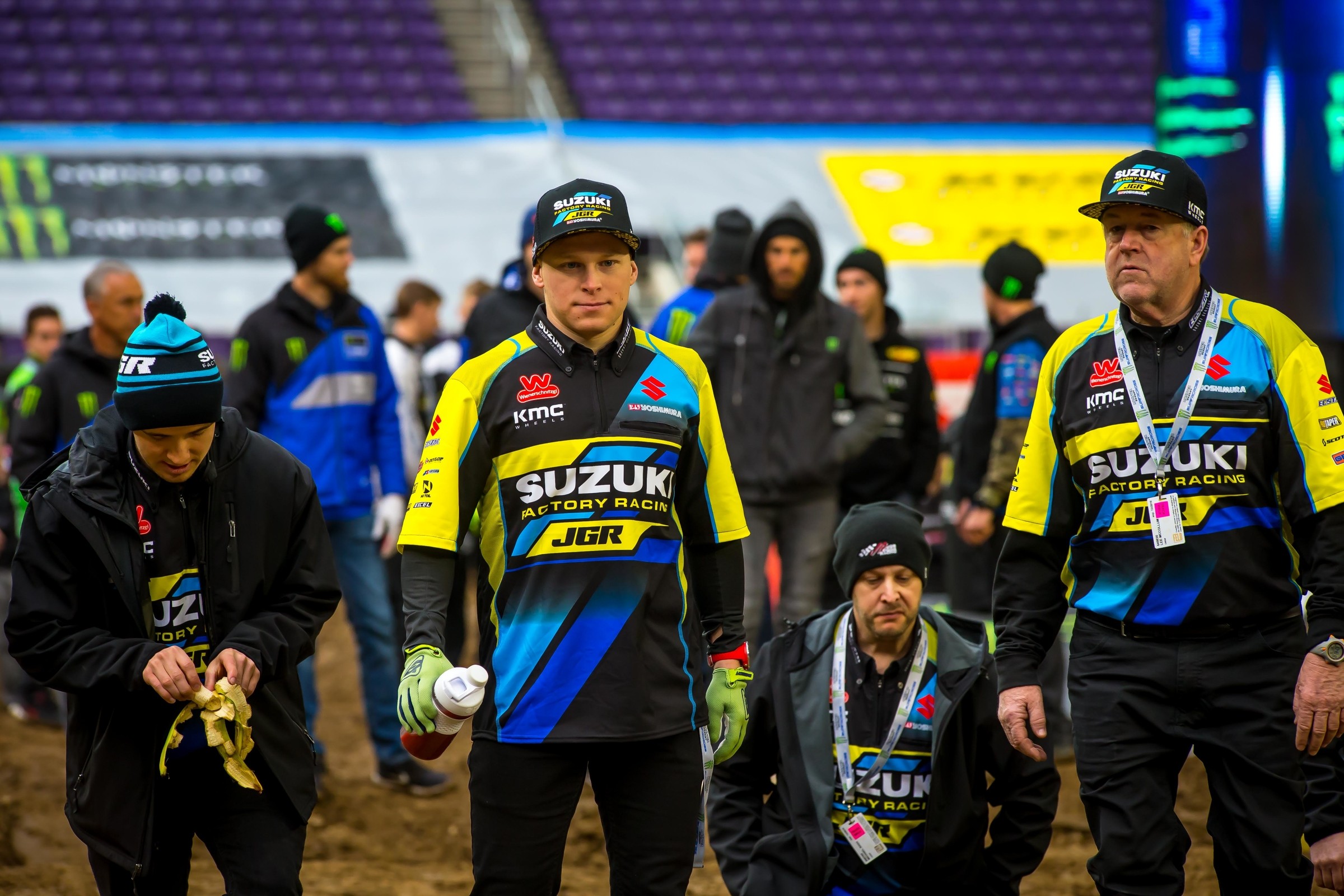 While Minneapolis was cold, inside U.S. Bank Stadium the 2019 Monster Energy AMA Supercross Championship continued to bring the heat, from the 450SX to the beginning of the 250SX East Region. From the hectic LCQ race to Jordon Smith’s rear tire change on the main event gate, the entire night was exciting and entertaining.

Alex Martin, who had a hometown race in Minneapolis, made his JGR/Yoshimura Suzuki Factory Racing debut. He struggled at the test track but showed no signs of that throughout his races on Saturday night, as he was solid in his heat race, where he finished in second, and then earned a fourth-place finish in the main event.

For this week’s 3 on 3, Jason Thomas, Jason Weigandt, and Steve Matthes talk about the Troll Train.

1.) Some people (cough cough Steve) were very high on A-Mart entering the season. Did the opener change anything?

Jason Thomas: The only thing it changed for me was the level of my annoyance in Steve's gloating text messages. I figured that A-Mart would be solidly inside the top 10 but he was admittedly a tad better than I expected. Arlington will give us more to draw from, of course, and with Martin Davalos' weird weekend and Chase Sexton's crash, he will be under fire to match his fourth place finish.

Jason Weigandt: I'm gonna give Steve a huge nod on this one. A few weeks ago, Alex came to North Carolina to do a test with the rest of the JGR team, and his lap times were not good. The word on this spread like wildfire through the pits and everyone jumped off the Troll Train. But not Steve. He kept saying Alex was a racer and will be ready when the gate drops for actual competition. He was right. Alex was consistently up on the qualifying board and battled for a podium the entire main event. Crisis averted—Alex is going to be fine.

Steve Matthes: I BELIEVE IN THE TROLL. I heard about the pre-season buzz and I also heard Alex himself was telling everyone that Lorenzo Locurcio and Chase Sexton were beating him during the week down there in Florida. But I didn't care. I believed in Alex when maybe even he didn't. He's a racer, man, he's in great shape, and he's almost as old as Marty, he's not going to make dumb mistakes like some kids do (and Marty keeps doing). He's solid. So solid in fact that I believe, but cannot confirm, that Bob Seger wrote “Like a Rock” about Alex Martin. Is he going to win this title? No, but he can rack up some podiums and always be in the top five. Then outdoors, he's a podium threat every weekend.

2.) The pass A-Mart put on Marty seemed dirty. Thoughts? (Note: Martin did apologize to Davalos after the race.)

Thomas: Dirty is a relative term but it was aggressive without question. A-Mart doesn't have a reputation for that type of move so I think he gets the benefit of the doubt. Christian Craig ended A-Mart's season in 2017 with an over-the-top move in practice so maybe he is being proactive this year? I don't think it's something we will see often, it just kinda happened.

Weigandt: Yeah that was a gnarly pass, I think it was just Troll trying to set a tone. If it's a 50/50 risk/reward decision, he's going for it. I don't think he meant to crush Davalos, but I do think he was willing to stay on the gas and live with any consequences. For reference, just look at the 450SX main. The guys up front were faced with similar situations, but they all did the opposite. The 450SX guys are bracing themselves for a long season. They don't want to start drama or risk a crash, bad finish, or injury right now. They're erring on the side of caution. A lot of these things come down to split-second judgement calls, and Alex's judgement was to be aggressive when he saw an opening.

Matthes: Oh it was dirty. “We” don't normally ride like that and as Alex told us on the PulpMX Show, he was coming in hotter than he thought he was and was on the brakes. But yeah, took Marty down but classy enough to go apologize afterwards. “We're” not normally the type of rider and that's not our game. Sometimes Trolls get excited when they see daylight for the first time all year and that's what happened in Minneapolis. Our bad.

3.) Justin Cooper got him late for the final podium spot. What happened?

Jason Thomas: Hard to say for sure but Cooper deserves credit, instead of just "Why did A-Mart go backward?" The track was really tough to put in consistent laps. A few small mistakes could make a big difference from lap to lap. I think Cooper was stalking him a bit and then finally dropped the hammer on the second to last lap, logging a 49.1. That was one of his best laps of the race and probably not a coincidence. A-Mart's previous lap was a 51.6 so I think Justin Cooper sensed a moment of weakness and emptied the reserves. The final few laps can be a bit of cat and mouse, riders sizing up each other's fitness and also searching for a place to pass. As the laps wound down, Cooper found his opportunity.

Weigandt: Cooper had all this speed, but I think he spent a lot of the night working out jitters and trying not to throw it away. We didn't see the same aggression in the racing laps as we saw in his practice laps, which were blazing. This was just his second supercross race, and I think he wanted to just get through it clean... until he saw a podium up ahead late in the race, and realized it was too good of an opportunity to pass up. Then he started pushing again.

Matthes: I don't want to talk about it.