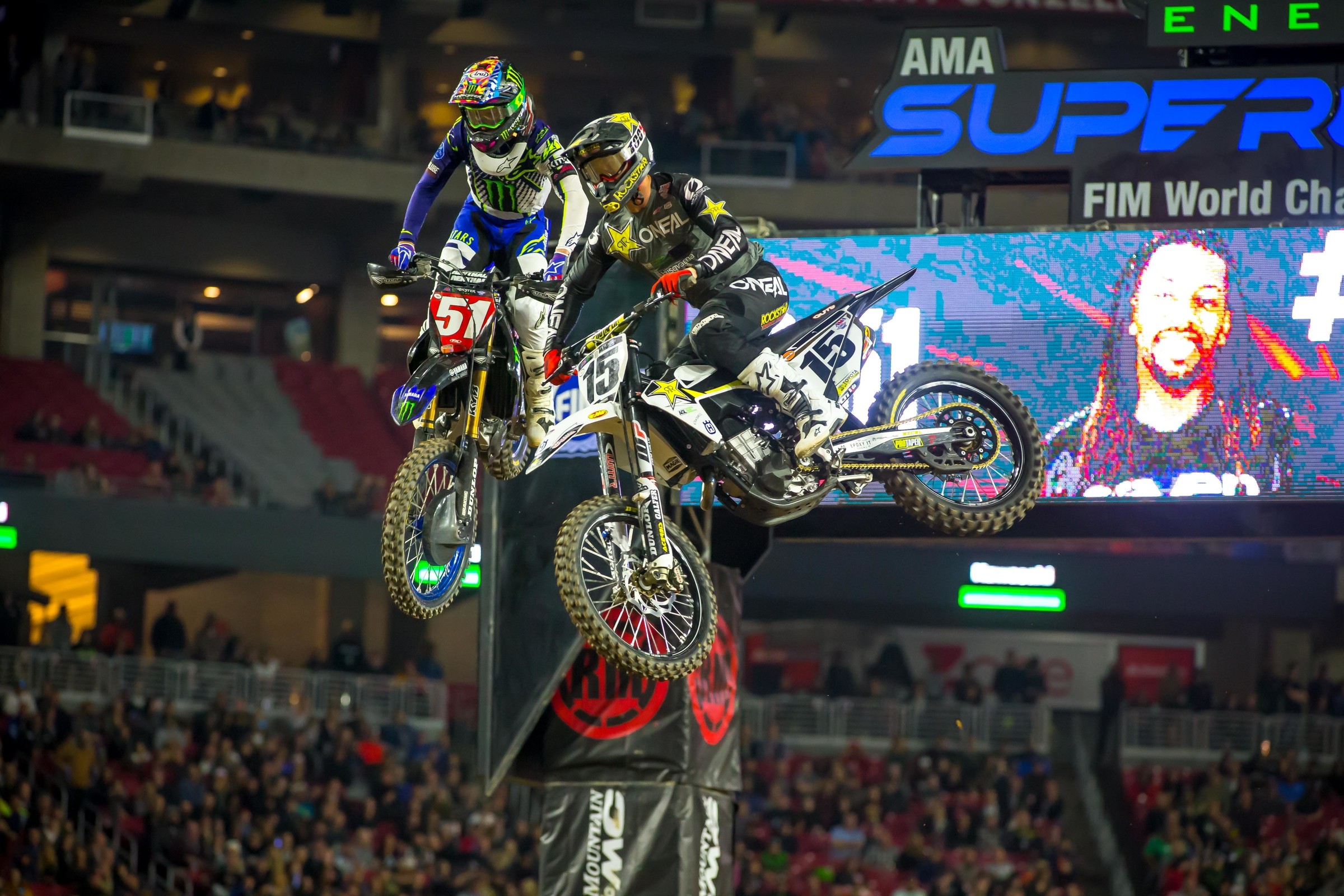 Between Wilson and Barcia

Last week Dean Wilson translated his “flying at the test track” into “flying at Anaheim 1,” after finishing second in qualifying and then leading 14 laps in the main event, before stumbling back to a fourth-place finish. Justin Barcia, who sat in third for a majority of the race, took advantage of Wilson’s mistakes—and Malcolm Stewart’s—to win A1.

However, Glendale was different for both riders. Wilson finished 12th in qualifying and didn’t have the hot start he did in the A1 main event and finished in eighth, and Barcia took sixth in the main event. The two also battled in the first heat and tempers flared.

We talked with Wilson and Barcia after the race.

Justin Barcia: It was difficult, to say the least. I made a lot of bike changes and we got better every time, but never got super comfortable and didn’t ride like myself. Salvaged it, a sixth, which is not cool after a win [last week], but I made the best of it. There’s nothing really to be said other than that I didn’t ride that great today. On to next weekend and try again.

Racer X: After the restart it looked like you were really trying to make moves quick. Is that something you were actively doing or were you just riding at your normal pace?
I was trying, I wanted to make some moves quick, but unfortunately my riding wasn’t quite up to par today. I had some good laps, but I’d make a few mistakes and in those big rhythms you’d lose a lot of time. I passed Eli [Tomac] really quick, then made a mistake and lost the position. It was a back and forth thing for me. At the end I was right on [Marvin] Musquin, but I just didn’t feel great today. It was just one of those things, I don’t know.

So nothing specific you can put your finger on to point to the difference between now and last week?
No, not really. This track for me was really difficult. It was really hard packed and I felt like I was chasing my tail a little bit all day, comfort wise. I’d say it was 50/50 with making bike adjustments and my riding. We got better, but it wasn’t enough. If I’d have maybe gotten a holeshot it might have been a different story. I salvaged it, but I just wasn’t comfortable. Nothing I can really put my finger on. I’m not going to go home and try to fix anything because nothing is broken. It was just one of those nights.

It’s not like sixth is a disaster.
No, it’s not a disaster. I didn’t throw it away, which was good. That track was brutal, probably one of the hardest tracks I’ve ridden in a long time. It was gnarly, had some sketchy stuff. Pretty high speed and big rhythms with some kickered-out stuff. Sketchy. All in all I’m glad I didn’t throw it away. Obviously I want to be on the podium though.

What happened between you and Dean Wilson in that heat race?
I don’t know what was really going on with that heat race. He [Wilson] said I cut over on him or something and he tried to take me out. He smashed my hand. I don’t know. I know what he was talking about before the finish line, but I didn’t intentionally try to jump into the side of him. That wasn’t my goal at all. It was just a slick track and I came over a little bit. I understand he was probably mad, but we don’t have to fight after the race. [Laughs] He got in my face and I pushed him out of my face. I saw it on the TV broadcast and they were trying to make a big deal out of it and saying I was getting in fights and that I needed to be more serious about this championship. It was stupid, it was no big deal. He was mad and that was pretty much it.

Dean Wilson: It wasn’t as happy jolly as A1. I qualified almost fastest at A1, here I was 12th. I was trying a bit too hard and not really connecting the track. The heat race came and I was in a battle, but not really riding that well. I ended up fifth or sixth. In the main I was late off the jump but recovered well. I think I was in like tenth and [moved] up some spots. I was in eighth, but seven, six, five, four, were all right there. I think if that red flag hadn’t of come out I would have done a bit better, to be honest, but once that red flag came out and we all restarted, everyone was just going at it again. It was a whole new battle. It was a good night though. I ended up eighth, I pushed to the end, and I’m safe. I’ll take that and move onto next weekend.

Racer X: When there’s a restart and there’s as much time between the restart as there was, is it hard to get going again?
Your body definitely is not warm. You’re just trying to recover in that short time. Deep breaths and try to recover. I looked at the clock and we had thirteen-and-a-half minutes to go so I knew it was going to be a bit of a sprint to the checkers. I don’t know how many laps, 12 or 14, and I just wanted to stay strong to the end. Justin Brayton got by me but I’m happy because I was doing pretty good at the end. That’s what’s important.

What went on between you and Justin Barcia in that heat race?
We got super close a few times and there’s no need for it. It’s a heat race. Let’s all just get through it safely. I’ve been injured enough and I don’t want to get injured again, especially when it’s not my fault. I said at the end of the race he was riding like a madman. I said he was crazy and he flipped me off twice. I just let him know that I’m not going to put up with that. I’ve seen him flip off so many people, including his own teammate last year. I’m not going to put up with it, and I just told him to cool the beans, it’s a heat race, let’s all be safe. He flipped me off and I’m not putting up with it.