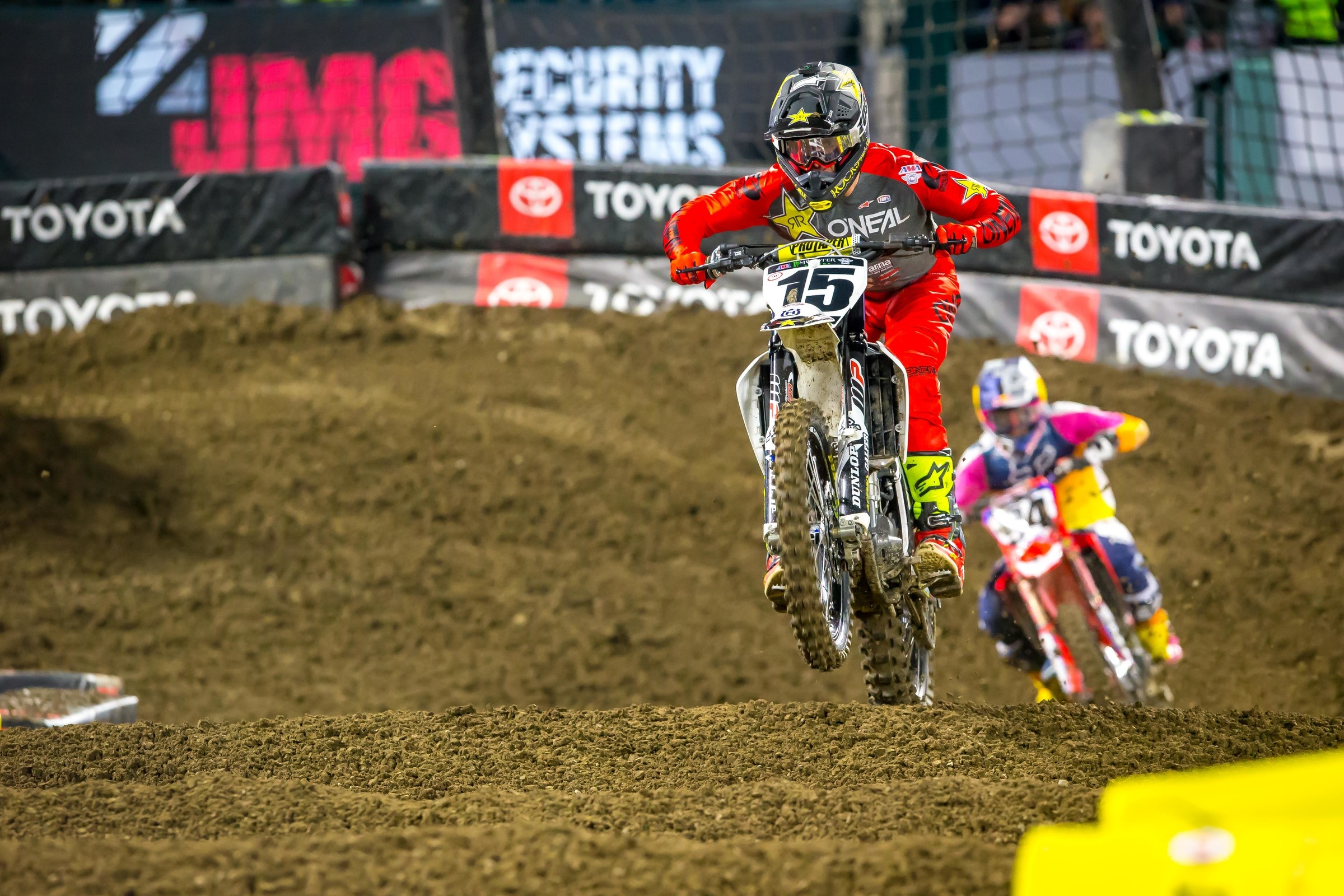 With Zach Osborne moving to the 450SX class in 2019, Dean was left without a spot on the factory squad (the team already has defending Monster Energy AMA Supercross Champion Jason Anderson, and hopes to add a third bike under the tent for Dean didn’t come together) so he was forced to build his own privateer program. As you’ll read below, Rockstar and Husqvarna did end up providing quite a bit of support, and Dean rode his machine incredibly well at Anaheim. We discuss that with Dean here, but first, it’s key to tackle a controversial subject during the weekend.

What really drew some attention this weekend was another one of Dean’s sponsors, Ignite, which produces CBD oil (the brand also sells marijuana, but Dean is only sponsored by the CBD oil sector of the brand. CBD oil is made using hemp, however it does not contain THC, so you can’t get high from use of it). On Saturday morning, word surfaced that supercross TV partner NBC and Feld Motor Sports were hesitant to show Wilson’s Ignite logos on screen. He was asked to cover the logos, and Dean complied.

We spoke to an executive with NBC Sports Network this week and he explained that CBD oils are simply not federally cleared at this time—"but it could be literally weeks away”—and the network wanted to avoid “an unregulated mess. Because what’s fine in California may not be fine in Arizona, and the show airs everywhere... We know that you can literally walk into a Whole Foods and buy CBD oil, but until the Ad Council defines where it fits under advertising standards, we are inclined to follow the existing provision.” That provision in NBC’s Advertising Standards states, “NBC does not accept advertising for illegal drug products, services, publications, or paraphernalia.”

“No one wants to take money away from a privateer,” said our NBC source. “But until there is actual legislation on this to define its category, we have to follow the existing standards.”

And with the new Federal Farm Bill that was signed by President Trump hemp—and CBD—are getting much closer to that clearance. According to USA Today, “Hemp plants are the same species as marijuana but contain virtually none of the psychoactive compounds that get people high. While hemp fibers have long been prized for their durability and use in clothing and paper, the plant is increasingly used to make food and other dietary supplements containing CBD, a cannabis derivative that boosters say has important health benefits.”

Bottom line: NBC could face a fine if the logo is seen on its networks. However, that rule could change soon.

Dean explained his side of the situation this past Monday on the PulpMX Show.

“Obviously Ignite came in. They wanted to support me,” Wilson told us about the situation. “They’re a really big help to my program. They fronted some money and they’re a big help. When they told me I couldn’t run the logos, I didn’t really cause a big scene or anything. I said, okay, whatever. The Ignite guy was there, the guy I deal with. So he had a meeting with Feld, but Feld said it was because NBC can’t have it on their TV. But Feld were awesome. Mike [Muye, senior director of operations – Monster Energy Supercross] was super nice. No hard feelings or anything. They were like, ‘We don’t care, it’s all good. It’s fine, but NBC just can’t have it.’”

For Dean, he had to block this stuff out and just focus on the racing.

“It’s actually kind of funny because the Ignite guy who I deal with was there and he’s a super, super nice guy. He’s like, ‘Hey, let’s just chill on it today and we’ll figure it out.’ So I was like, no worries. He just wanted me to focus on my racing and stuff like that. So the next day he told Dan [Bilzerian, owner of Ignite] what’s up. Dan went ham on social media and whatever. Honestly, I’m super happy to have them on board and I want to keep them. It would be a shame for NBC to kind of ruin it for me. I’m not getting involved. I’m honestly just racing and focusing on my program and that’s it. I don’t want to get involved in any bullshit because I feel like I’ve been doing really well, so I’m just going to keep doing what I’m doing.”

As far as the racing part, Dean performed very well.

“Yeah, I think it was a great day,” Wilson explained. “That’s a really good day. Qualified second, holeshot my heat. Led the heat for a bit. Got second in that, and then holeshot the main and led. I wish I had a remote where I could just rewind back and change a couple things. It kind of hurts because I feel like I could have and I should have won it. Coulda, shoulda, woulda. But I feel like I should have won it. I was in the perfect position for it. I ran into some lappers and then I missed that double-double in the middle [one lap].

“I ran into lappers right there and then someone went down after the finish. I went on the inside of them. He went outside and then he got me the next turn. From there, I ran into lappers, tossed the goggles. I looked back and I was just hoping it was one of those mud races where there was a bit of separation, and then I saw Eli was coming [for third]. I told myself, ‘He is not getting this.’ Then I crossed the track and he passed me. By the time I hit the tunnel, I looked and he was just on a mission. I’m like, come on! It was almost the perfect fairytale story.”

Lots of people were expecting Wilson to fill in at his old team when Osborne went down with an injury but Wilson explained that it just wouldn’t have been right to ditch all the people who were behind him for only a few races. When Osborne comes back, Wilson would have to return to his van, anyway. So unless there’s a long term injury on the factory Husqvarna team, Wilson will keep working from his sprinter van with help from the sponsors he’s gathered up. Wilson also parted with his long-term agent Tony Gardea last year so as he told us, it’s been all him on the phone lining up all the deals for this attack on the supercross series.

Last time I saw Wilson before Anaheim was at Glen Helen and he was testing different bikes to figure out what he wanted to ride this year. At that time, I didn’t think there was anyway he would be back on a white one. After all, they had let him go after a good 2018 Monster Energy AMA Supercross seson. So how did he end up back on the brand that dumped him?

“Rockstar were really the only ones that stuck behind me,” he explained. “I was trying to figure out what bike I wanted to ride. I spoke to Mitch Payton [at Pro Circuit]. He was like, ‘Just try the bikes and see what you like.’ My plan was Mitch was going to do everything with whatever bike I picked. So Rockstar stuck behind me and they were like, ‘Listen, we want you on the Husky. Rockstar, Husky, they work together. We want you on Husky.’ I said, ‘That’s fine. I like the Husky.’ Okay, so that’s done. We’re going to ride Huskys. So then Mitch is going to do all my stuff because he did [Chad Reed’s] stuff last year, so he had some specs that we could have did. So, I was going to do that and then Husky were like, ‘We would really prefer you to use FMF because they’re the global brand for Husky.’ So I said, ‘Okay, but who’s going to do my engines?’ because the thing I liked about Mitch is it’s a one-stop shop with my suspension, my pipe, triple clamps, everything. So I was like, ‘I’m fine with that, but who’s going to do my engine?’

“So Rockstar pushed and Bobby Hewitt helped a little bit. They were like, ‘Okay. Here’s what we’ve go for you. We’ve managed to get you a factory service engine and 48mm forks.’ I said, ‘Okay, perfect. That’s sweet.’ Honestly, Rockstar made a huge push for me. That’s why I plugged them and I have a lot of respect for them because they really stuck behind me when I didn’t have anything, and then Bobby Hewitt was also a big help, Scuba [Steve Westfall of the Rockstar Energy Husqvarna team]. Honestly the whole Rockstar team has been a huge help.”

The bike situation has to be working, because wet or dry, he was very impressive at Anaheim 1. Unique situation for a unique guy—it’ll be interesting to see what he can do with this whole thing he’s got going on. What a cool story if Wilson can end up fighting back, yet again, to a factory team.