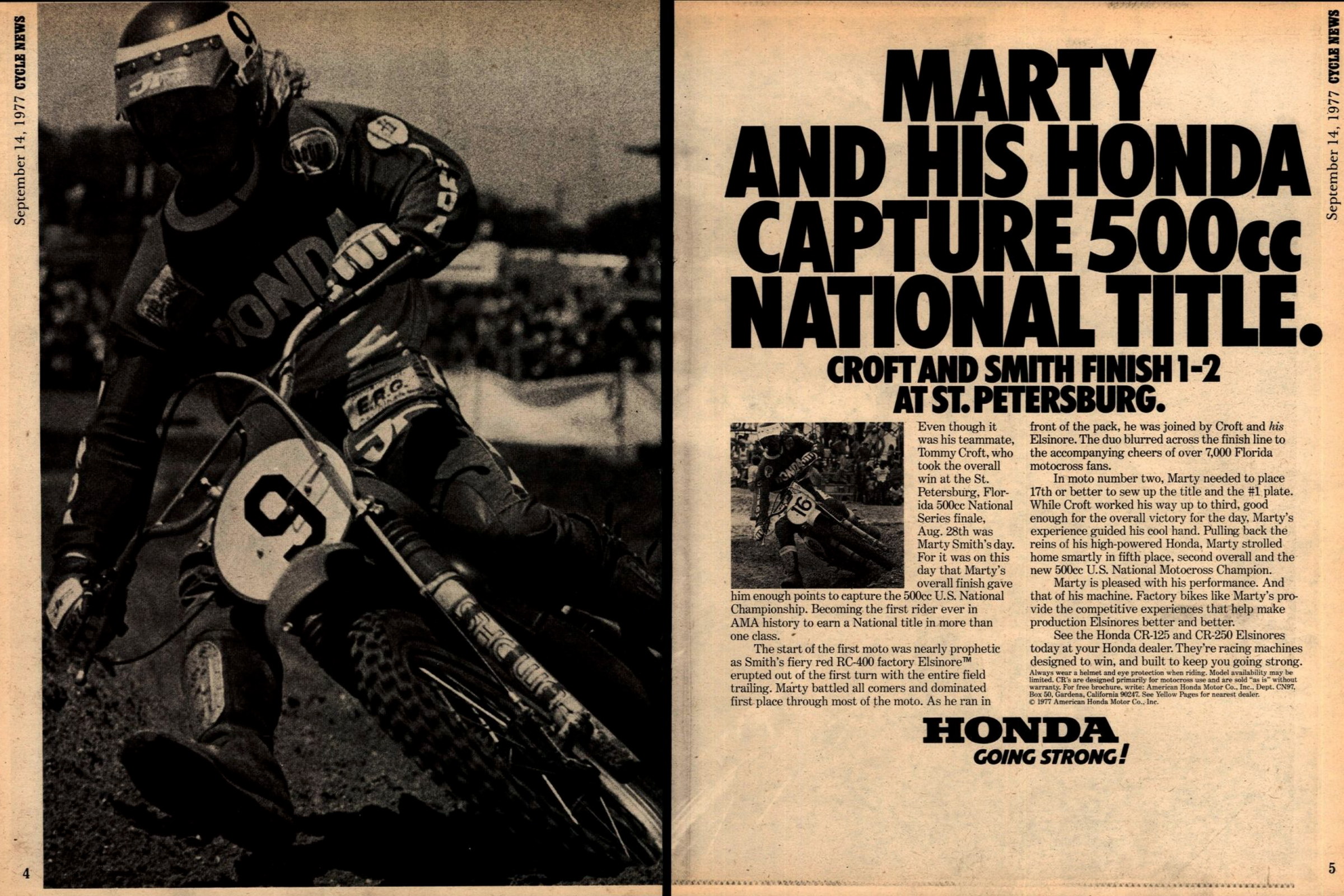 On This Day in Moto August 28

Sue Fish landed on the cover of Cycle News after dominating the Fourth Annual Women's Motocross Championship at Saddleback, sweeping both the 125cc and 250cc Expert classes.

Ten minutes into the first moto at the Pizza Hut-sponsored St. Petersburg National in Florida, Bob Hannah took over the lead from his bitter rival Marty Smith and, with his three-point advantage, seemed headed toward the 1977 AMA 500cc National Championship. But just as suddenly as he took the lead, Hannah's Yamaha came to a stop as a clip came off his throttle cable and the slide of his carburetor was stuck closed. Smith raced off for the moto win, and what was a three-point deficit suddenly became a 22-point lead.

In the second moto, Smith rode cautiously to fifth, clinching the title. The overall race winner was Smith's Honda teammate Tommy Croft, who went 2-3 in the motos. Smith was second, Maico rider Steve Stackable third, and Suzuki's Danny LaPorte fourth after winning the last moto. A disappointed Hannah would ride to a lackluster seventh.

Over in Switzerland, the FIM 500cc Motocross World Championship was finishing up, and Roger DeCoster, dethroned as champion by Yamaha's Heikki Mikkola, guided his Suzuki to the overall win with 2-1 scores, losing the first moto to KTM's Jaak Van Velthoven. Mikkola did not score any points in the final round but still won by 50 points based on winning eight of the first 11 rounds of the series. It was Yamaha's first 500cc world championship.

Here is some footage of Mikkola winning the Dutch GP earlier in the year, courtesy of Champion Spark Plugs.

The dramatic conclusion of the 1983 AMA/Wrangler Grand National Championship took place at Spring Creek in Millville, Minnesota. It came in the form of a 125/250/500 National and involved 250cc rider David Bailey and his Honda teammate Bob Hannah, as well as 125cc riders Mark Barnett, the rookie Ron Lechien, and another Honda teamster in Johnny O'Mara. Our friend Tom Mueller was on hand for that race and recently wrote this feature article about the sport then and now.

The last round of the '88 AMA 125/500 National Championship took place at Washougal, and while Kawasaki's Jeff Ward won the 500cc battle, Honda's Rick Johnson won the war by taking the #1 plate. And in the 125 Class, Honda's George Holland topped both the last round and the championship—he had actually clinched it before he even got to Washougal. Holland's teammate Guy Cooper finished second, with Suzuki's Donny Schmit third.

In Sweden, Gert Jan-Van Doorn took the final win of the '88 FIM 250cc Motocross World Championship with 1-1 finishes aboard a Cagiva, but the '88 world champ would be Yamaha rider John Van den Berk, who ran 3-2. It was the second straight year that the Dutchman won a title, as he took the previous season's 125 title. Finland's Pekka Vehkonnen finished the series second overall, and U.S. rider Rodney Smith of the Chesterfield Suzuki team was third.