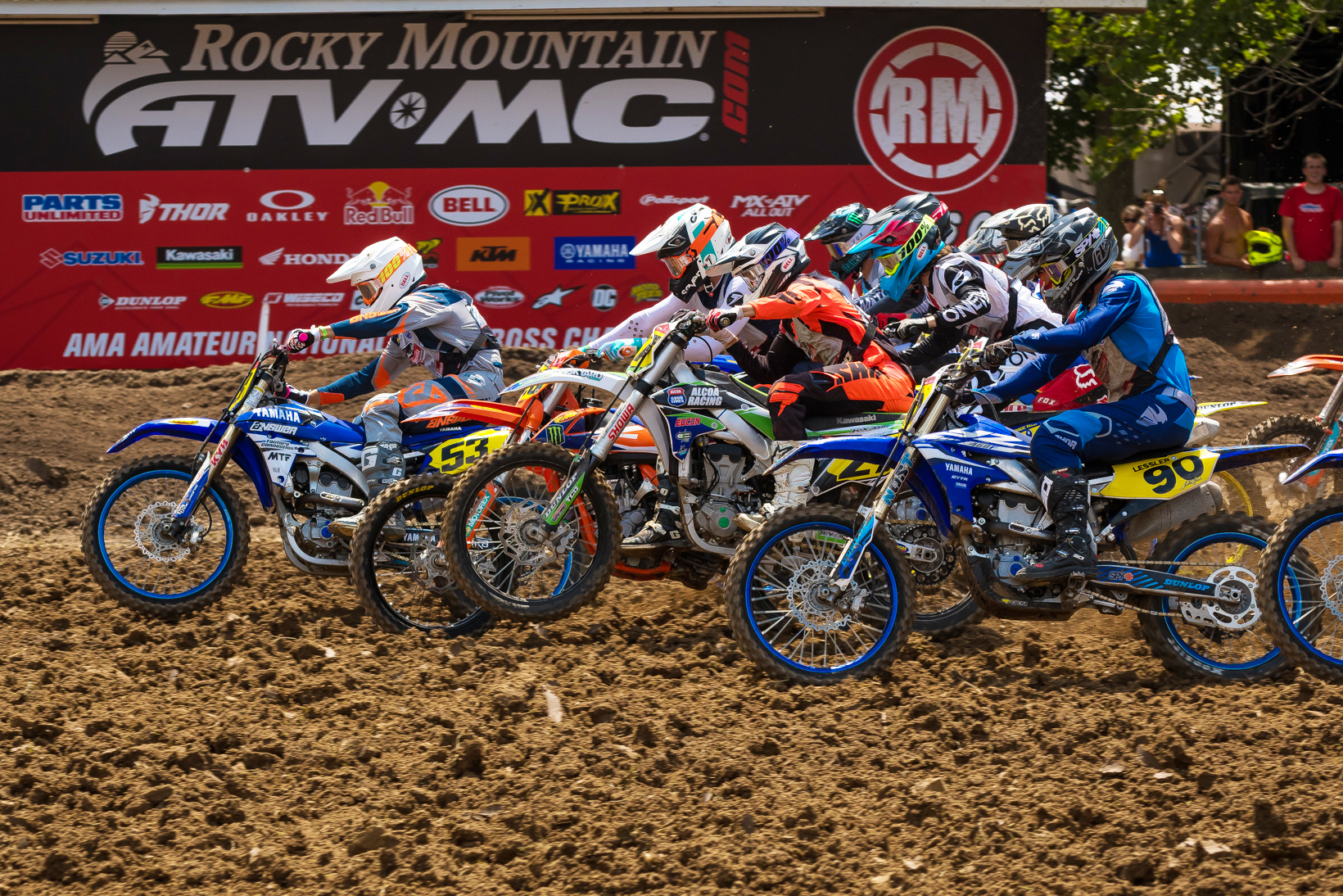 1. Piece of Cake for Drake

Troy Lee Designs/Red Bull KTM prospect Derek Drake is beginning to pull away from the A class field and the race for the coveted AMA Nicky Hayden Horizon Award. After a big moto win in 250 A on Wednesday, the Californian checked out early in Open Pro Sport and grabbed another win. He sits on 1-1 scores heading into Friday’s final moto. Behind him, a big battle raged for second, as Mitchell Falk held the spot and Seth Hammaker rallied up to third. They went at it: Hammaker made a quick pass, Falk tripled back by him, and they battled all the way to the final turn, with Falk holding onto the spot. Falk has 3-2 finishes and Hammaker a 2-3, so it’s in Drake’s hands heading into moto three.

Nate Thrasher is riding out of his mind right now. He’s crushing the Supermini field, now carding four dominant moto wins across his two classes. Thrasher is a big kid for a Supermini, so he usually struggles with starts; he said his goal is to be top four off the line and then go to work. Since he’s routinely lapping three to four seconds quicker than his competition, it never takes long for him to work into the lead. Somewhere in California, annual Loretta’s dominator Jett Reynolds is watching these results with a scowl. Reynolds is out this year with a shoulder injury, and Thrasher, with the help of Millsaps Training Facility and KTM, has picked up his game big-time. Can Reynolds go faster than someone who is already three seconds per lap faster than everyone else in Supermini? They’ll meet up again somewhere down the road, and it’s going to be interesting.

It’s amazing to watch Ty Masterpool rip this track on his Star Racing Yamaha YZ125. It’s especially entertaining because his starts have been absolutely terrible all week, which leads to unbelievable comeback charges where he passes more than half of the field. After one moto, Ryan Villopoto grabbed Masterpool and brought him over to the Loretta’s burnout area (a flat piece of dirt in the campground where riders can test their bikes) and made him do practice starts. Ty says RV made him do at least 30 starts… but it clearly didn’t work, because his starts still suck! Worse, he had a problem before his 125 B/C moto and couldn’t even do his sight lap, which set him further back—around 20th early.

This led to one of the best battles of the week. Up front, Aiden Tijero worked his way forward and got the lead from Gage Linville, but arm pump later slowed him. Linville started challenging Tijero just as Masterpool pulled up to third. A crazy three-rider battle ensued until Masterpool fell in the billboard turn. A lap later, Tijero crashed in the same corner! This left Linville in the lead, but Masterpool had one magic run left and charged back up to his fender on the last lap. Linville bobbled when his clutch lever hit the embankment on the inside of a corner, and Masterpool shot past with half a lap to go to take the lead and the win.

Masterpool had another 125 moto in Schoolboy 1 and once again blew his start—17th at the end of lap one. He logged another amazing comeback, but this time he ran out of time and could only get to third. Maybe he needs more practice starts with RV? Maybe fewer? Credit to KTM rider Ethan Mann, who was consistent for second in moto one and won moto two. He holds the overall lead with 2-1 scores compared to Masterpool’s 1-3. Yamaha rider Cullin Park dealt with serious pressure from Masterpool down the stretch but hung on for second.

5. Learning From the Pros

Each year, Thor/Parts Unlimited hosts a panel session with pro riders taking questions from parents and amateur riders. I was lucky enough to host this year and got to talk with Jeremy McGrath, Adam Cianciarulo, and Garrett Marchbanks about their unique paths to the Ranch. While it’s not exactly something “we learned” on the track, we learned a ton away from it.