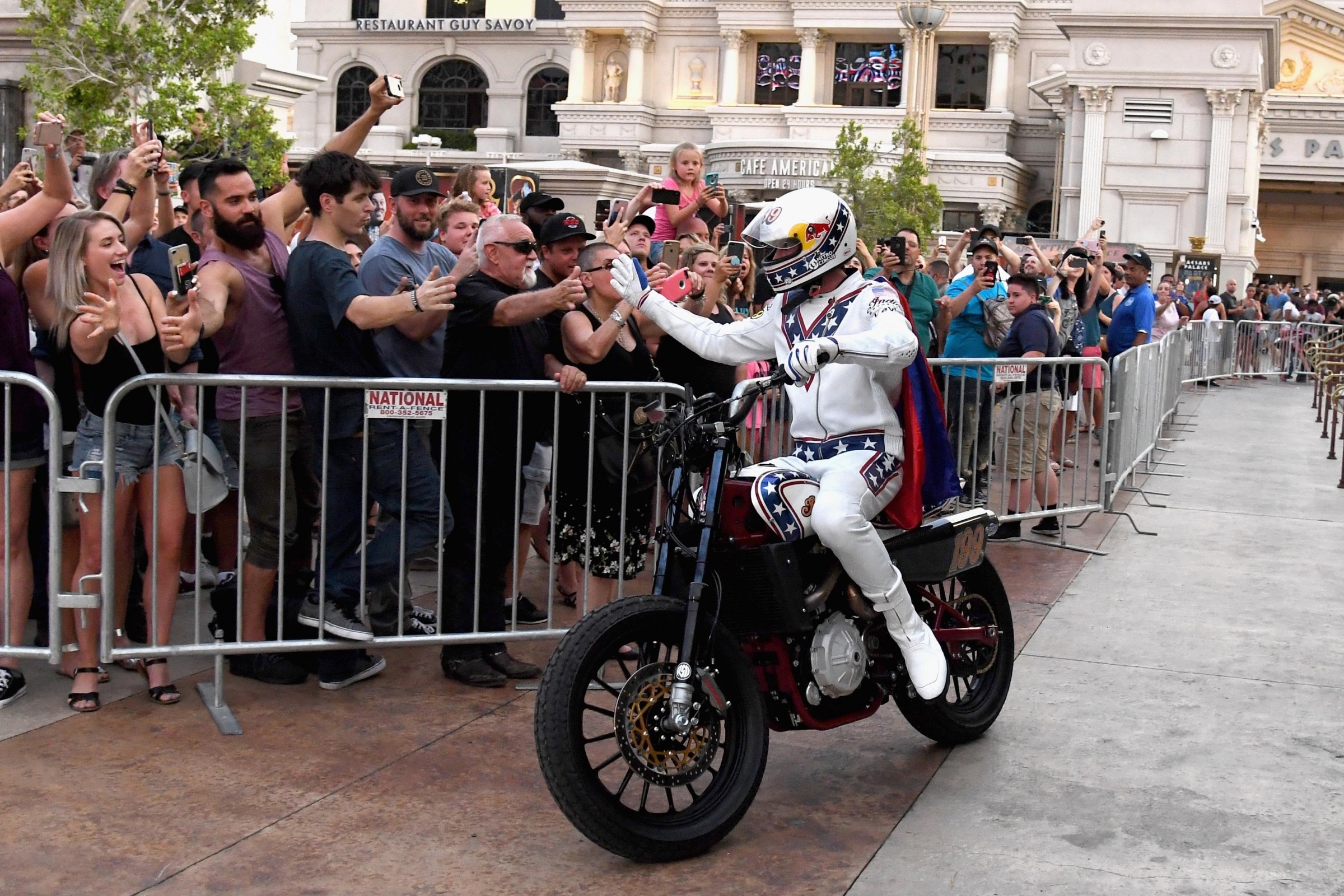 The stated goal of Travis Pastrana’s Evel Live show on HISTORY channel was to simply conquer three of Evel Knievel’s biggest jumps in one take, a throwback tribute to the OG daredevil. This wasn’t just about jumps, though, because Evel was about much more than jumping.

Evel Knievel wasn’t a math equation of X MPH + X ramp angle = X distance. Evel was performance art, from his personality away from the ramps to his showmanship on them. Evel was cool and ridiculous all at once. He’s known just as much for the misses as the makes. His outfits, style, and bikes exist on the bookends of right and wrong. Everyone knew with Evel, the threat of it going catastrophically wrong was not a perception, but a reality, and he owned it before owning it was a term.

That’s what it takes to entertain people for hours while doing something that takes merely seconds. Evel’s equation was ramps + MPH + buzz.

Only Travis Pastrana can deliver that today. His nice-guy personality is completely at odds with everything evil about Evel, but attention adheres to him in the same way. Travis’ appeal, too, goes way beyond the results. Anyone who watched his brief run as a racer in this sport knows he created an electricity like no other. ESPN can say the same about his life at the X Games. Same for rally car. Same for his attempts at NASCAR, which weren’t successful on the track but absolutely, positively, left positive reviews in his wake. Any time Travis’ name gets brought up in NASCAR, they talk about how cool and fun he was and how he made time for everyone. It’s really the same story as motocross—we all wish so badly it had worked out, because Travis is just so awesome.

Literally went to the grandstands and signed for every fan. Good guy! https://t.co/J7HQGaZsTU

Travis does amazing things, and his failures only happen because he’s always trying to do stuff at the highest level. Even his motocross career is better than 90 percent of those who have ever swung a leg over, although it still seems like it fell short. Judge him as an all-around motorsports guy and he’s about as good as it gets.

But it’s about more than results. Travis Pastrana trades in infectiousness. With Travis, everyone is on board. He’s not the most famous athlete in the world, and he is not as famous now as Evel Knievel was in his prime. But he has so much credibility with so many people because he’s had so many great interactions through the years.

My favorite part of last night’s show wasn’t the jumps, but Travis actually riding his bike from one Vegas venue to another, on the street, with a police escort. See, the easy thing to do would be to just get a limo ride from spot to spot or do it all cool with a helicopter. Or they could have shut the roads down briefly. But instead, Travis road the streets with a police escort. He was in the left lane, police in front of him, with the right lane still jammed up with regular Las Vegas traffic. And of course, at every red light, Travis was high-fiving random people, doing wheelies, and posing for selfies while riding. Anyone driving on Flamingo Road and Las Vegas Boulevard last night got to be part of the Nitro Circus for a few minutes. It seems like everyone is part of that circus at some point. Everyone is in Travis’ posse.

As the three-hour live show rolled on (again, about 30 seconds of actual jumping), social media was buzzing with all the people who can claim, “Hey, you know what, I actually kinda know Travis.” His wake is so wide. Pastrana has a way of making it seem like everyone is his best friend. If anyone else were doing these jumps, they’d just be jumps. When Travis does it, it pulls you in deeper.

Social media was all over it, with NASCAR people finding old photos as proof he was around their orbit once. Motocross people, too. I’d imagine the same for rally car. I even got sucked into it myself. Two weeks ago, I posted a podcast with Travis from an interview I did with him last year. I couldn’t help but feel a little extra important as I watched this show go on, with so much attention on him, knowing we’ve had conversations before. If you want to name-drop, Travis Pastrana is as good a name as any.

Well, it IS Travis right? https://t.co/2DShytomk6

About to watch this baaaaaaaaaad man do his thing on the @history channel! #evellive @travispastrana

#Sendit Sunday , honoring @travispastrana while he honors @officialevelknievel At @caesarspalace tonight @8 on @history This photo was from Englishtown at the @racekawasaki race of champions.. I would almost always get the holeshot on Travis , but can’t recall actually beating him in a race , or any riding game he came up with while riding .. Recalling riding at Croom off road park in FL, we were about 14 on 80’s , & for fun Travis would make up crazy hard riding games involving near impossible feats ???? his ambition is still inspirational & he’s a great servant leader ?? @nitrocircus #nitrocircus

In case ya zoned out or on vacation..... @travispastrana jumping 3 Evil Knievel jumps on @history channel right now ?? #braaap ✊? #evellive

Check out the @History Channel right now.. good luck @TravisPastrana you are an animal! #EvilKnievelSpecial

@srtusa - @travispastrana You got this! Best of luck tonight in Las Vegas! We’ll all be watching #Evellive. ? #sticlub

What an awesome personality this guy has! @travispastrana that was AMAZING! #Evellive

Pretty awesome to watch this guy stick it 3 times in a row recreating Evel's Vegas jumps tonight on @history, was fun spending the week with him in a very different setting at Pikes... the one and only! #evellive #travispastrana #evelknievel

I’m glad the @travispastrana Evel Knievel jumps went safely tonight in Las Vegas! The dude is amazing. I dug up some pictures from my archives of the time Travis came out to play in the trucks at Lake Elsinore. Let’s say the landing didn’t go as smoothly... I had never seen that done to a wheel before!! #travispastrana #evellive #redbull #lawndart #endoverend #offroadracing #LOORRS #lucasoiloffroad #lucasoil #BFGoodrich #bfgracing #bfgoodrichtires #offroad #shortcourse #racing #racinglife @nitrocircus

@travispastrana the king, the g.o.a.t. the greatest career ever known... my motivation since this day has been your lives work. I never made it past 125 b class, i have never done a backflip, but you taught me how to live my life for my passion. Without him garretnuts as you know him would be a laboring cnc programmer. Not the man you know today. I loved #actionfigures2 and it reminds me why I am who I am. It's official now... top of my list is to goto #pastranaland #lifeiswhatyoumakeit #evenifitsjustdirtbikesandbackflips #youtaughtmehowtolivemydream @carlsonjason889 is also here with me. And mad props to him because me and that dude still kick it after 30 years knowing eachother. #bamf #lovelife #cantdoitlikeme #pastramivsnutsdriftbattle #bringit #sendit #endit #evelive #evellive

Of course, anything on social media has to carry a bit of negativity, and some took shots saying the jumps weren’t that impressive. That’s an impossible debate to solve. I do know that Travis Pastrana has done things every crazier and more impressive than this. Jamie Little, who has covered Travis from his supercross days (she even once penned a feature story on Travis for Racer X Illustrated) to the X Games to NASCAR knows this best, and put it best.

Going to say it now, that was probably the easiest jump on the ‘big stage’ Travis has Ever done. https://t.co/epYHgicTN3

It wasn’t his most impressive stunt, riding-wise, but keeping everyone riveted for three hours is no easy feat. He did it because with Travis, it’s never just about the jumps.