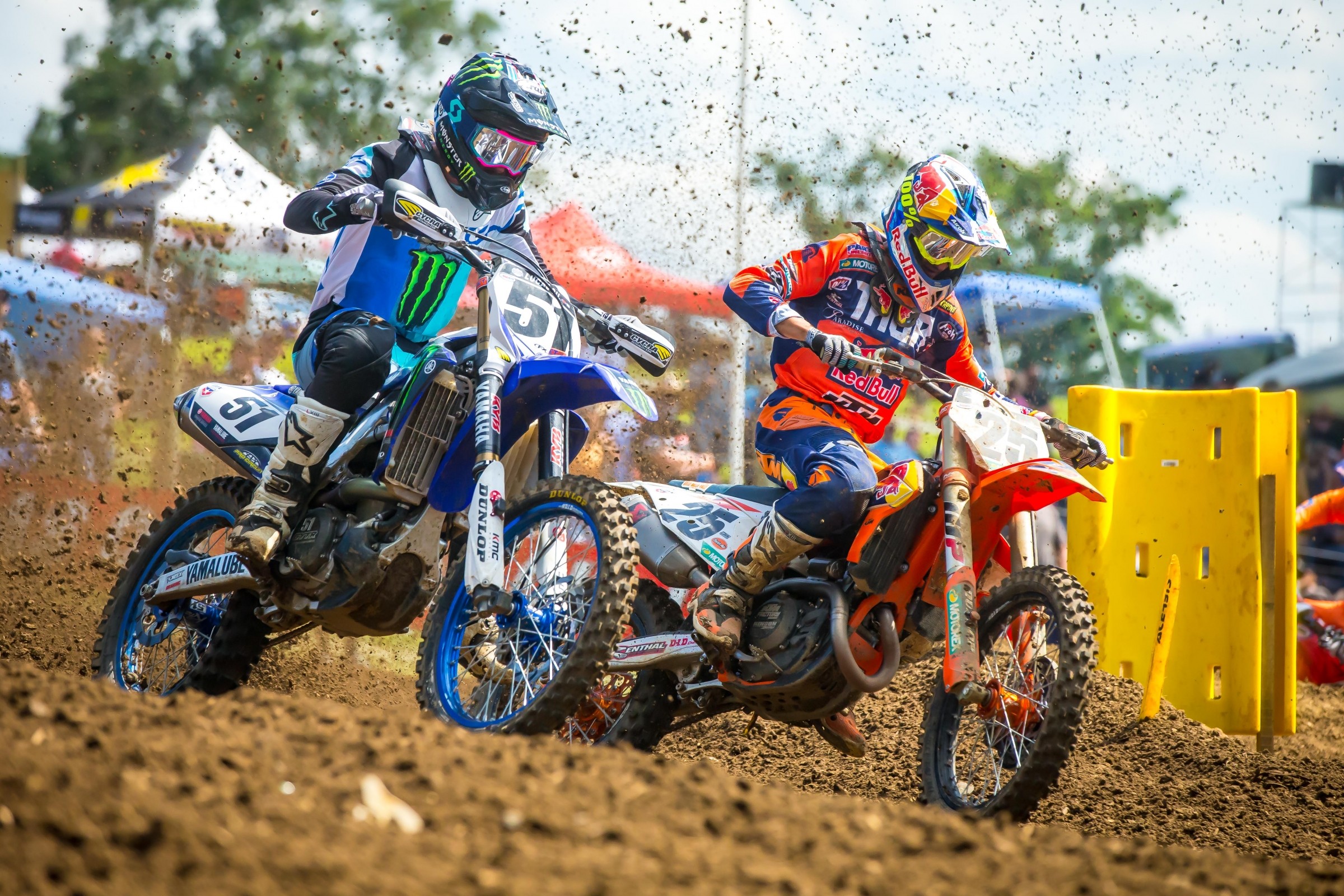 Racer X: Justin, I know that you’ve been working extremely hard. It seems like not only are you back, but you’re getting stronger each and every week.
Justin Barcia: For sure. I’m really happy. It was a good day. Just getting more comfortable with the bike each weekend. We’re really close, but we’re just taking steps to get more comfortable. Also, my riding as well is getting better. Just trying to put everything together. Today was definitely another step in the right direction. I had a lot of fun. That second moto was tough. That track was difficult, really difficult.

Eli, obviously moto one went kind of to script. Moto two quite a bit different. Take us through what was going through your mind early in that race, and then at the later stages when you knew that maybe a third was as good as it was going to get.
Eli Tomac: Yeah, I was just playing catch-up. That’s all I could do. I was buried on the start there. That’s just the way it was. I was just too far back to get in touch with the two guys up front. I was just eating a lot of roost. That was about it, really. Just trying to get to third. I saw Marvin and Justin. I knew which way the points were going to fall, so once I got to third… plus, it was too late anyway. Justin was going really fast. Just settled at that point, and that was that.

Marvin, moto one was not very typical for you, was it?
Marvin Musquin: When you crash in the first lap, it doesn’t help. Made it really difficult on me. I clipped someone’s back wheel in the first lap. From that, I just tried my best to come back. When you have the top four or five guys up in the front, it’s really hard to get better than a fifth. That’s what I got. I caught Blake Baggett on the last lap, but it was not enough. Very frustrating to be in this position, but that’s racing. I gave my best and all I could do second moto to get a better start and stay on two wheels, and that’s what happened. Be patient and got around [Ken] Roczen and then got around Justin. I was able to control the race towards the end. That’s awesome. It’s a good feeling. It was good enough for at least a podium. That’s all I could do today.

Marvin, when you go down in the first lap like that, does it cause you to be really nervous, or are you confident? “This is just another day and I can cut through the pack quickly?”
Musquin: Like I said, when the top four or five guys are out there, you know right now in the 450 field, it’s not too hard for us to come back towards the top ten, but then towards the top five, it’s more difficult. So I knew if I was being patient, I could come back to a decent place, but fifth was all I got. Obviously when you crash in the first lap and you see all the field going by you, it’s tough. It’s tough, but you got to deal with it and try your best. That’s all I did.

Barcia, you mentioned the first moto throttle control was really important on this track. So when you’re in these battles, how hard is it to control that?
Barcia: It’s easy to over-ride a track like this, especially with my riding style. But that’s something I’ve been working on a lot, trying to be smoother. The Yamaha has plenty of power. When you over-ride it, it makes the chassis tighter kind of and stuff. So that second moto, I knew Eli was coming at the end and I really needed to throw down some good laps and push it to that limit, but still not over-ride it. It was hard. It takes a good rider to sort this track out. Like Marvin second moto was just on rails and nailed his marks and stuff. That’s what you got to do on a track like this. I feel like this track is kind of like an MXGP track a little bit. It’s slick underneath, braking bumps and chop from the throttle and stuff like that. But it was a little one-lined today. Lappers were awful. But besides that, I think this place is great. I had a lot of fun. Keep on working.

Did you know overall in the second moto? Does that ever enter your mind, or were you just racing your race?
Barcia: I had no idea when I came off whatever happened. I just was racing my own race and trying to do the best I could do with where I was at and how fast I could ride.

Eli, it seems like this year, you have a couple laps when you really need it that you’re able to pull out. You don’t have to do it the whole moto, but we saw it here. You were able to get to Roczen pretty quickly. Is that almost like a strategy? “I’m not going to go to the edge, but if I need to, I got something?” Or is that just something we’re seeing happen, but that’s not really what you’re planning?
Tomac: I guess it’s what I’m planning. If I want to make a little charge, I go out there and do it. The first moto was good. It was a good start and I was able to make that pass and was patient about it, too. I wasn’t able to do that in the second moto. Those guys were too far gone.

In the second moto, you were moving up somewhat, and then you eventually see Justin or even Roczen in front of you…“I can see the lead group?”
Tomac: I got to that group, but they were still a little ways out front, so that was that.

Did you know overall when you got into third? Did you know that you had that?
Tomac: I did. I knew I was good for that.

At that point, did you back it down or did you try to make a run?
Tomac: I made a little run for a lap or two, but then Justin turned up the gas too and I wasn’t having any of it, so I just stayed in third.

Eli, different times in the sport’s history, you’ve had guys like [Ricky] Carmichael on a roll and other guys. What’s it like in a zone like you’re in right now?
Tomac: When everything’s working and you’re healthy and you’re flowing good on your bike, you feel good in most of the conditions. It just makes life easier. We’ve got that going on with us right now, so it’s good.

Can you guys talk about Southwick a little bit? Talk about racing in the sand next weekend.
Barcia: For sure, I like Southwick. I grew up racing up there as a kid. It’s a good place for me. I’ve always really enjoyed racing there. I think I got my first win there ever, so it’s exciting. I like to send it there.

Tomac: I love that place. I wish we had more than one sandy track a year. Looking forward to it.

We talked about it at the very first press conference we were all in this year, now we’re closing in on midway point. Are you guys still interested in being on the Motocross of Nations team and representing it? You two are first and third in points right now. You’d be the top Americans.
Tomac: It seems like I get asked that every week, but the answer is yes.

Marvin, would you represent the country of France?
Musquin: Yes, especially this year in the U.S. That would be nice. RedBud is definitely the place where you want to have Motocross of Nations. We’ll see. You can also ask Dylan [Ferrandis] right there for the 250.