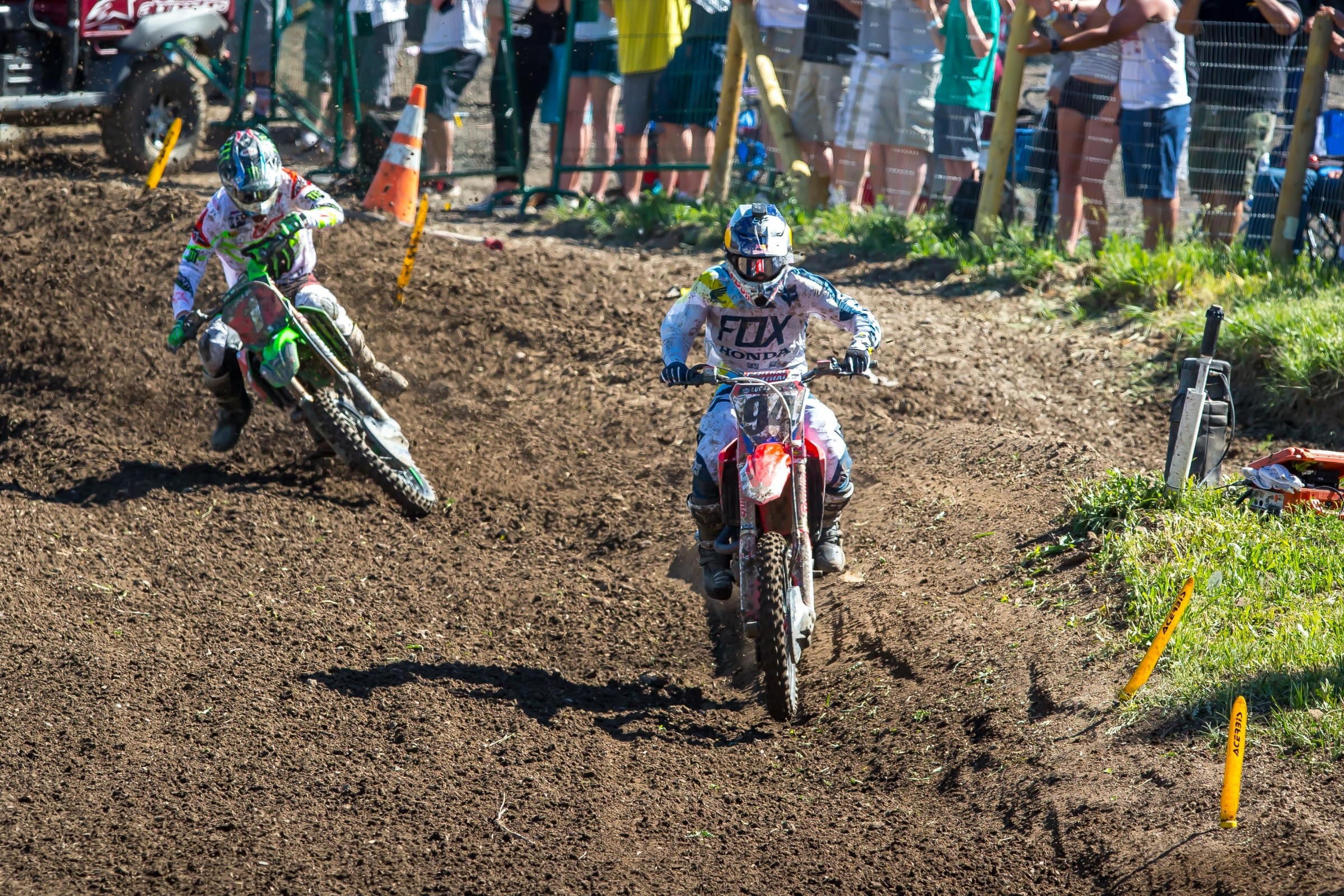 "The True Value Thunder Valley Motocross is a mouthful, but this track is a jaw-dropper for a first-timer," Jason Thomas wrote in last week's Staging Area about round three of the Lucas Oil Pro Motocross Championship. With altitude, and brutal ruts and roost for riders to contend with, the veteran of 15-plus years of pro racing grabbed some photos from the race in the Rocky Mountains  to explain how things went.

Blake Baggett bounced back in a big way with a podium in Colorado. He didn’t match last year’s win, but he was much more relevant throughout the day. He showed speed in timed qualifying, pushed Ken Roczen all the way to the checkers in the first moto, then holeshot the second moto. Winning at this level takes every piece of the puzzle, and Blake took a big step forward in that regard.

In the photo below, he is accelerating through a right-hand turn (just past the mechanics’ area) with a rise on the exit. On the backside of the rise, there is a drop-off leading to a big tabletop. The corner momentum is pushing towards the outside (left), but riders are fighting that energy to get back to the right over the jump. The next tabletop’s ideal approach is to jump from right to left as the track floats that direction down the hill. Getting back to the right is hard to do as the corner flows left, and as riders crest the jump, they are floating and unable to pivot midair. As Blake is cresting the jump in this photo, his inside leg is off the bike. That is helping lean back to the inside and fight that outward drift, but it leaves him vulnerable to the rear tire “stepping out,” or losing traction to the outside. He would be pressing hard on the outside peg to keep that rear tire planted and driving forward.

Most readers have seen a novice rider in this same type of section come off the rise sideways and swap into a nasty crash. The most common causes for that are twofold. As said rider is accelerating, they are out of position (i.e., not weighting the outside peg) and that allows the rear tire to spin. As it spins, one of two things will happen. Often, the rear continues to spin to the outside and they float sideways with the rear tire to the left. As they touch the ground, they will either land with their rear tire to the left and slide down, or worse—swap violently back to the opposite side and lose control. The other unenviable option is that their rear tire will spin and catch right before the crest of the jump, loading the suspension at the base of the rise and then unloading on takeoff. The rear will rebound back to the right, against the natural momentum of the section. This is an ugly scenario and will almost always result in a big crash.

To combat any of that, Blake is using his body weight and throttle control. His inside leg is acting as a rudder, not only to keep his leverage inside, but if his tires spin, he can put his foot into the dirt to steady against it. He is weighting the outside peg to keep the rear tire in place. He has slid forward on the seat, applying pressure to the front tire in hopes of steering back to the right over the jump. He has to compromise with his seat position, though, sliding forward to help steer the front tire but not so far as to lose traction with the rear tire. His torso is right in line with the rest of the bike, his outer elbow is up, and he is attacking the track instead of simply becoming a passenger. These things are happening in fractions of a second and are second-nature to a rider at Blake’s level.

Justin Barcia was riding at a podium level on Saturday. A red flag restart in moto one and a big crash in moto two impeded that result, but his riding was superb nonetheless. In this photo, he is railing through a deep rut in qualifying practice. Barcia grew up in New York and thrives in these conditions. His form and technique exemplify that background. He knows that carrying speed through ruts like this requires the right lean angle and body positioning.

The most visual example of this is his inside leg position. He has lifted it above the radiator shroud and is nearly (or might actually be) touching the handlebars with his thigh. So many riders make the mistake of letting their inside leg be dragged backwards in a turn like this. Getting it up and out of the way is critical to maintaining the right body position. As soon as a rider’s leg is pulled back, their body weight goes backwards with it. That takes weight off the front tire and causes an immediate loss of traction and steering. Most riders will then be forced to engage the clutch, standing their bike upright in the rut and increasing the chances of falling over the high side of the rut. It’s a common mistake, but also a critical one.

This photo of Ken Roczen and Eli Tomac is from the second moto (guessing, but shadows indicate later in the day). Eli spent most of his day chasing both Roczen and Justin Barcia. He would make his way around both by the end of each moto, but much like Glen Helen, he had to work for it. He wouldn’t make his way into the lead until lap ten in both motos, meaning he followed both riders for around 45 minutes of racing. That’s a long time to follow. That’s a lot of roost to absorb and avoid.

That’s why I chose this photo. On a track like Thunder Valley, where the roost is brutally painful, avoiding roost is a way of life. Any chance riders get to swerve out of the main line and get away from the stone spray, they take it. As Eli exits the rut in this photo, he is pivoting to his right. Roczen is accelerating hard and spraying dirt and rocks toward Tomac’s ideal line, forcing him to turn under that roost. Eli is ducking his helmet, utilizing his visor to block the incoming roost as well. Tomac’s line choices were affected by this roost in several sections, but this photo does a great job of illustrating the inconvenience.

Another subtlety of this photo is in the growing confidence for Roczen. Thunder Valley marked back-to-back weekends where Roczen has led several laps. For a rider we expected to ease his way back to the fray, he is completely shifting that expectation. With his rapid improvement and a weekend off to find even more, I think he is going to win a moto sooner rather than later. Tomac has been impressive, winning every moto thus far, but he also leaves opportunity with his poor starts at times and lack of urgency in the early laps. Roczen is getting stronger, and as he keeps putting himself in winning positions, he will end up doing just that.