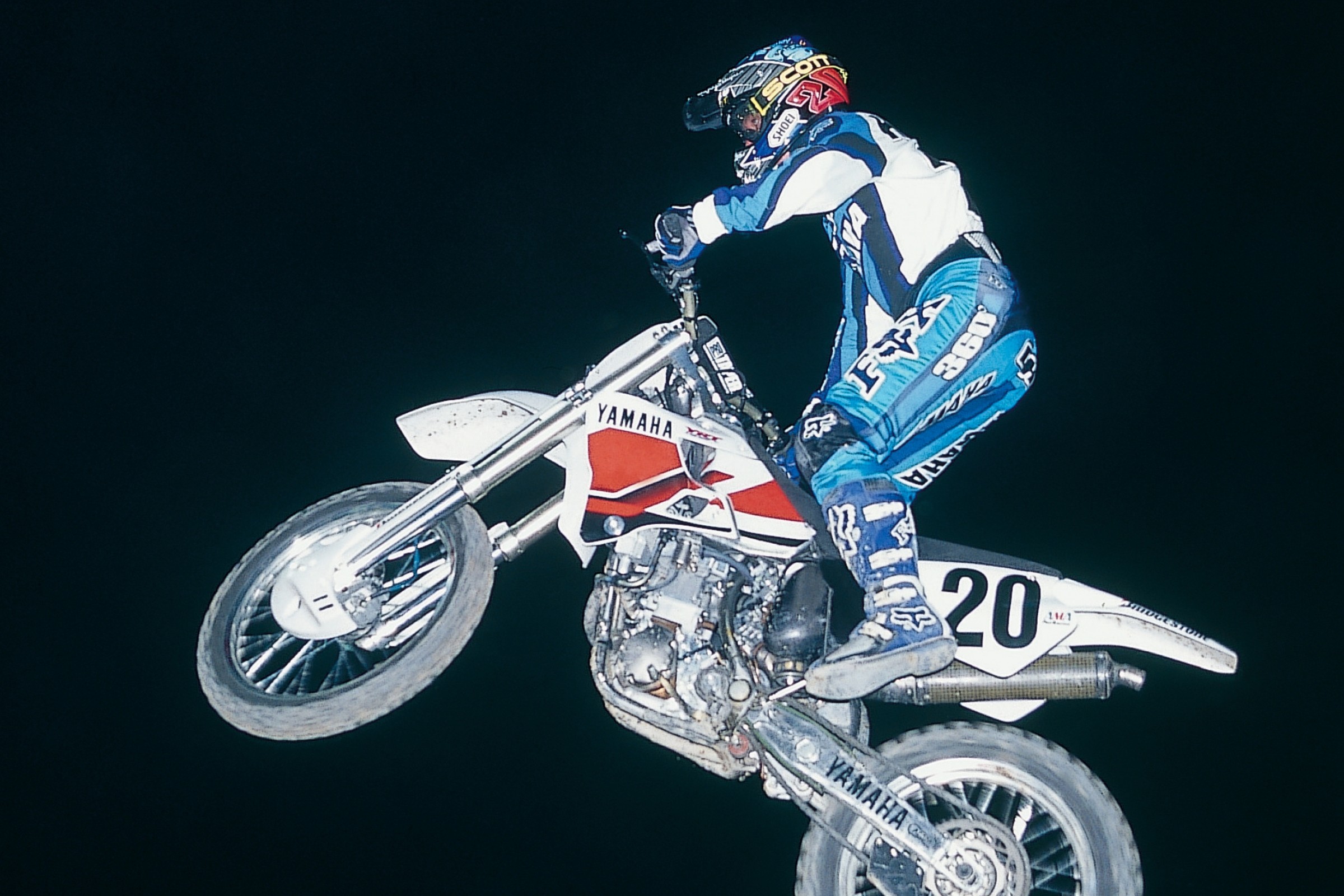 In what would turn out to be one of the single-most pivotal moments in the history of not only AMA Supercross, but the motorcycle industry in general, Team Yamaha's Doug Henry won the season-ending Las Vegas Supercross on a prototype Yamaha 400cc four-stroke motorcycle. It was the AMA Supercross debut for the bike, which Henry had ridden in the three outdoor AMA Nationals that took place before Vegas that year (Gatorback, Hangtown, Glen Helen). He and Yamaha decided to give it a try in Las Vegas since Henry, a points leader earlier in the series before breaking his hand in a collision with Jimmy Button, was not in contention for the win.

Here's what you may not know: In a move that would have unintended consequences and tilt the race towards Henry and the four-stroke, PACE Motorsports, the event promoter, decided to spray liquid magnesium chloride on the track's surface in order to help hold the dust down, which was the same ingredient PACE was using on their dirt tracks for Formula USA racing. It had the effect of making the track incredibly slick and blue-grooved, which played perfectly into the hands of Henry and the four-stroke, which tracked much better on the slick, dry surface.

Henry shocked the supercross world by winning the race ahead of Kawasaki's Ryan Hughes and Manchester Honda’s Damon Bradshaw. Also, this would mark Bradshaw's last-ever AMA Supercross race, and he would finish in the same spot he did in his first race in 1989: third in the 250 class. Henry's win basically started the four-stroke revolution that would see professional motocross change completely from two-strokes to four-strokes within the next decade.

Also, Jeff Emig finished fifth, two spots ahead of Suzuki-mounted Jeremy McGrath. It was enough for Team Kawasaki's Emig to clinch the 1997 AMA Supercross Championship. It ended McGrath's four-year reign as champion, but the King of Supercross would be back in 1998 with a vengeance.

In the 125 Shootout, this iconic photo of Ricky Carmichael and Kevin Windham colliding was shot by former Dirt Rider and Cycle News editor Ken Faught. Windham went on to take the win; Carmichael placed 18th.

In what was arguably the signature moment of his remarkable career, Team Honda's Eric Geboers ran out of gas while battling with Cagiva's Pekka Vehkonnen for the win in the first moto at the FIM 250cc Grand Prix in Best, Holland. Geboers, maybe 100 yards from the finish, frantically pushed his works Honda CR250 through the deep sand to the finish line, salvaging second place in the moto and falling over just past the finish line. In the second moto, Geboers won and took the overall victory from his rival Vehkonnen. You can see it all beginning at the 3:30 mark in the video below: