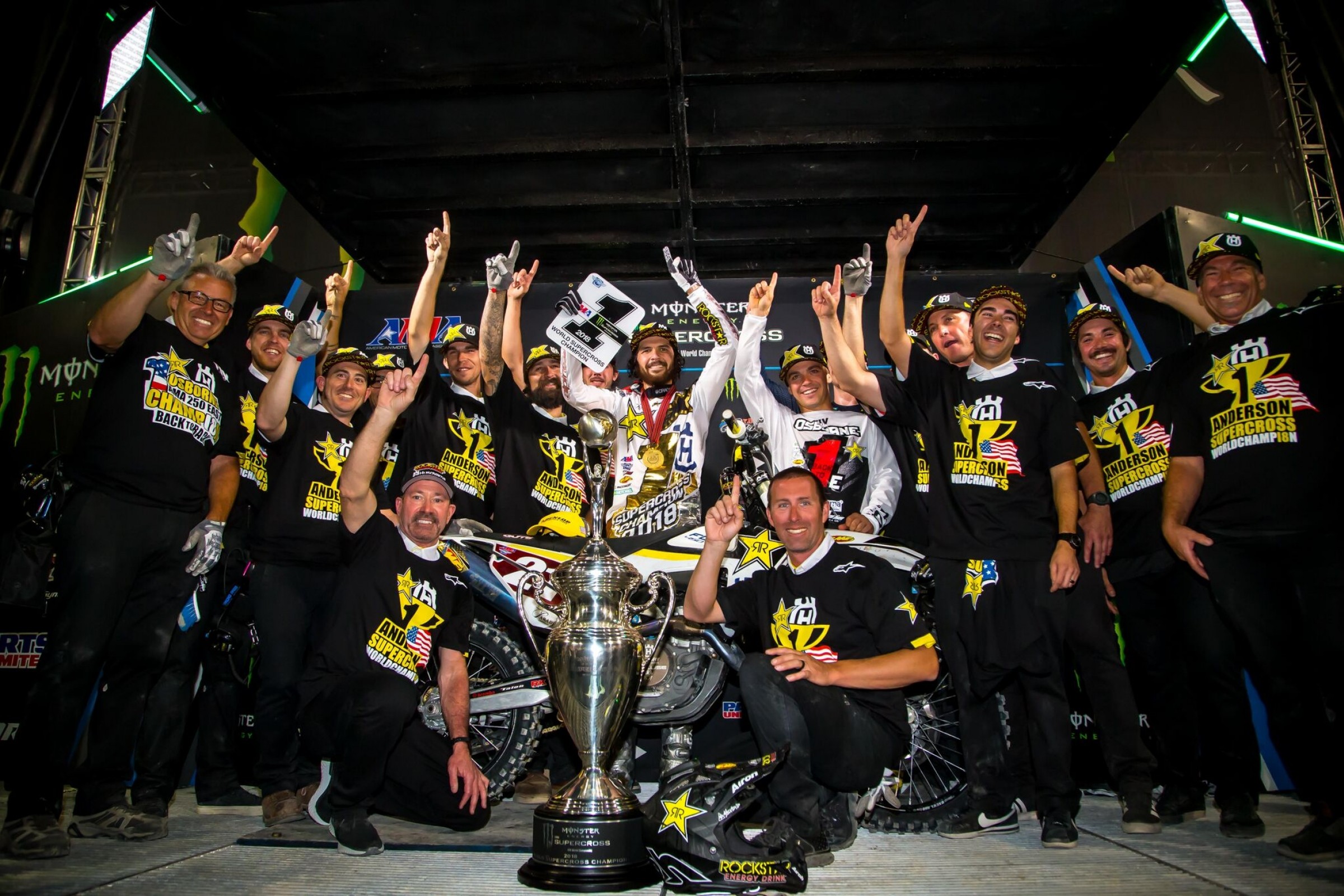 After last year’s ridiculous drama in the final of Monster Energy Supercross, there were thoughts that drama would fill the air with all three championships still up for grabs during this year’s finale. Jason Anderson needed to get 11th or better in order to win the 450SX title, Zach Osborne needed at least 12th to win the 250SX East, and Aaron Plessinger needed at least 10th to win the 250SX West. They did their part this time, staying away from that fray and locking down the championships, without incident. The points leaders coming in—Anderson, Osborne and Plessinger, left as the champions in their respective divisions.

Anderson saved his drama for last week. His broken spokes last weekend kept the title fight alive, and he admitted finally, after clinching the crown tonight with a fifth-place finish, that he was "pretty spent mentally." Worse, he had suffered food poisoning last night... He wasn’t feeling well in the championship press conference and actually left in the middle because he was also so cold—sweaty, wet gear without a jacket didn’t help. All three champions finished off the podium, but were able to finish where they needed to get their number on plates. Anderson finished fifth on the night. “This whole off-season I just did what I felt was right. I manifested myself on winning that championship is all I thought about. It was tough, 17 races and I was leading it since round two. I’m pretty mentally spent. I feel like I handled it decently. Even after last week which was pretty crazy.”

The 450 race came down to staying consistent on the super hard and slippery track. Eli Tomac benefitted from amazing starts, pulling so strong down the start stretch in his heat that he blew through the first turn. He got it “just right” in the main event. “Like these guys said, it was tough,” said Tomac, who went on to capture his eighth win of the season on his Monster Energy Kawasaki. “The lappers, the whoops, trying to figure out if you should skim or jump them. My starts were good tonight, overall happy the way we rode. But I had a really big moment in the rhythm in the main event, I shouldn’t have rode it out, but I did.”

“I knew it was going to be a tough main event,” said Musquin, who finished second on his Red Bull KTM. “The heat race was okay but it got even harder and more slippery in the main. Eli started better than me and we were first and second. We both made mistakes and pushed hard. I made a mistake with the lappers, the rhythm before the finish. I lost the contact with Eli and after that the gap stayed the same to the checkers. On the track I improved so much since last year and I’m proud of that.”

Blake Baggett finished third on his Rocky Mountain ATV/MC KTM. “It’s Vegas, it’s nothing like the Strip,” he said. “It’s tough. It’s not a party. It’s slick out there and I wasn’t quite on the pace with these other two guys. Another third place. Of course I want to get a second or a first, but just add another to my list.”

In the 250s race, Adam Cianciarulo stamped it in Las Vegas again by coming through traffic to win the Dave Coombs Sr. East/West Showdown for the second year in a row.

“Tonight was one of those races where it was a little bit tougher to start in the front,” said McElrath. “I didn’t know which lines to take. I pulled a holeshot, haven’t had one of those in awhile, and we progressed all day. I’m excited about that. Adam’s two for two in the two Vegas rounds, it was hard to see him pull away, but we ended up on the podium and we’re ready for outdoors.”

“I started jumping the whoops, that was a better line for me,” said Smith. “Adam was on rails out there. He came past me on maybe the third or fourth lap or something. I just put my head down and tried to make the same passes he did. I came up to second.”

“I think the only difference between me and other races is that mentally I was just trying to get to the front and not settle,” said Cianciarulo. “The heat race we just tried to pinpoint some things, we went to work on that. I had to pass some world class talent, so it’s definitely one of my better wins, for sure.”

With good news for Cianciarulo comes some bad—he explained that the knee he injured last year after a run-in with Zach Osborne in Indianapolis will require surgery, and he will not be able to race the Lucas Oil Pro Motocross Championship. Adam says he has had a torn ACL, and the constant pounding of racing is tearing up his meniscus. “It was fine all of last summer. It was kind of ok, and then I messed it up again. I hyper-extended it at the US GP and that kind of put a damper on things. It’s been filling up with fluid pretty much every time I ride. Every day life it’s fine. I don’t notice it too much, but when it comes to training and riding and stuff it was coming to the point where I don’t even think I could make it through outdoors. You’re just liable to dab it and every time I dab it, it’s pretty terrible pain. I can’t really ride for a few days. So it’s just time.”

Plessinger was coming through the pack when he had a big close in a high speed section and he commented by saying, "I had to battle my way up to eighth, I had a moment. I swapped out on the straight away, so after that I said “Time to back it down.” Had a good old time riding my dirt bike.”