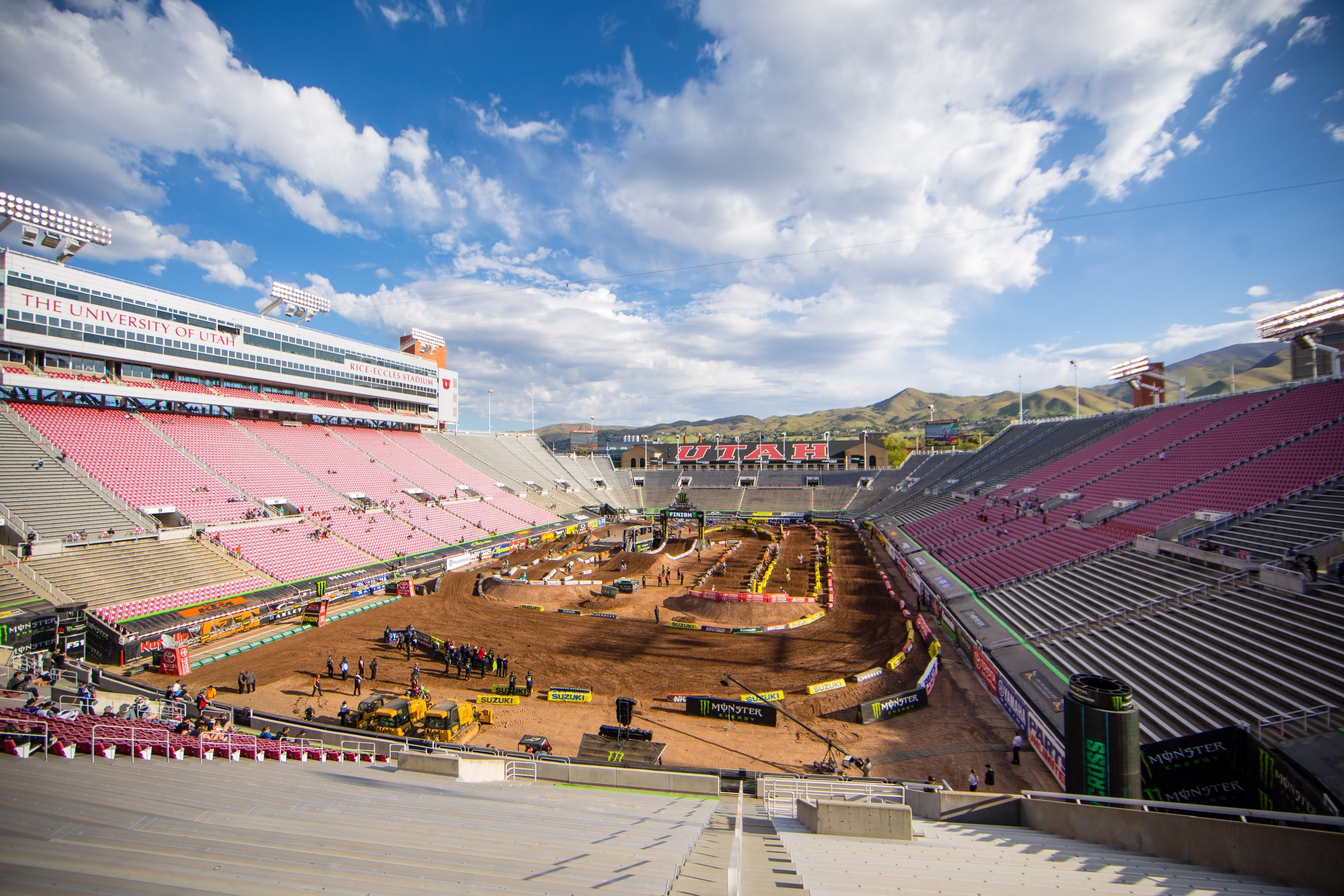 The penultimate round of Monster Energy Supercross took place this past weekend in Salt Lake City, and the fans got some real drama! Thrills, chills, and spills were all a part the race, as were the usual things, like: Musquin taking the win, Pro Circuit Kawasakis up front, and blazing speed and a fall from Eli Tomac.

As far as the track is concerned, well, it didn’t look like much fun to ride. Combining windy conditions with hard-packed dirt made it challenging for track builders to keep moist. It got hard, it got dusty, and as I said, I’m sure the riders were complaining. In fact, both Tyler Bowers and Weston Peick compared SLC to Lake Elsinore, and that’s not in a good way.

But, hey, you want to be a complete rider? You gotta perform on all conditions. I’ve said the same thing with Lucas Oil Pro Motocross. Every track now has similar soil and is prepped the same way. The outdoor tracks are basically the same dirt week to week, and I think this hurts the riders when it comes to the Motocross of Nations. Let’s get some variety out there, yeah? A little bit of dust and hard pack never hurt anyone. The guys that had throttle control, proper technique, and adapted to the lines the quickest were rewarded in Salt Lake.

Jason Anderson’s mid-race front wheel swap due to some broken spokes reminded us all that this sport can be crazy. There are so many things that can go wrong—but usually don’t—that every time something like this happens, it’s a reminder of how challenging motorcycle racing really is.

As a former mechanic who built motors week after week, I know there are thousands of parts in these things that move, spin, and engage with forces that are crazy intense. The fact that we don’t see more things go wrong is amazing. So Anderson’s potential title clinch gets a tad more interesting this weekend, although the odds are still heavily in his favor. He’s basically got to get a top-ten, and we’ve seen him lying on the ground on the first lap and still get that. The only way for #21 to not be the 450SX champion is either an injury or a bike issue.

The cool thing this weekend is there will be three champions crowned, but all three—Anderson, Zach Osborne, and Aaron Plessinger—have double-digit leads in their series. It will take a big upset for any of them to lose the grips they have on their points lead. But, as we were reminded this weekend, anything can happen in motorcycle racing.

And please, spare me the tweets about how the Rockstar Energy Husqvarna team took too long to swap out a front wheel. It took around a 1:40, and this was with getting the tools out, going to the cart to get the front wheel, and trying to line up spacers, axles, and discs into the front brake pads. That’s pretty quick. The team did a good job with the whole process and hey, they even got help from the team that was second in the points and most likely to gain from Anderson’s front wheel issue. Yes, that’s weird, but as we know, KTM and Husqvarna are the same company riding basically the same bikes. KTM mechanics were actually over there helping! That sound you hear are the Japanese OEM VIPs smashing their heads into their desks.

I thought that with one race left in the series, we should look back at some riders in the series and our pre-season thoughts on them and what actually transpired this year.

Pre-Season Talk: There are four championship contenders (Ken Roczen, Eli Tomac, Marvin Musquin, and Anderson), and in many people’s eyes, Anderson was the fourth most likely one to win this title. He also didn’t do the full Aldon Baker boot camp in Florida, choosing to test a new bike and not ride with one of his main competitors (Musquin), and that’s going to hurt him. And for as fast as he is, he makes too many mistakes to win this title.

Reality: Although helped by Roczen’s hand injury and Musquin and Tomac missing a race (or races) due to injuries, Anderson has proven to be rather consistent—something he said his old training partner Ryan Dungey taught him. He proved to be plenty fast enough to win races, but in terms of raw speed, he might be behind Eli and tied with Marvin. But it’s been hard to tell because of a huge points lead that he no doubt at times rode to protect. Still, his come-from-behind salvage rides at Indianapolis and Daytona showed he could step it up when he needed to ride on that edge. His Oakland win, from way back to pass Roczen on the last lap, was spectacular. Anderson out-performed all the doubts we had about him this year, and that’s a good thing.

Pre-Season Talk: He’ll be fast, win races, and be right there for a title. Whoop skills (when they’re big and gnarly) is a question mark, and does he have that killer instinct needed on the track?

Reality: Marvin was really fast and won races. His whoops skills were, uh, tested when he couldn’t get through them in Houston and crashed and missed the race, which crushed his title chances (probably). So all that was correct. What wasn’t correct? We wondered if Marv had a killer instinct in him, and Foxborough showed that he does. Although that was just a bit much there, Marv.

Pre-Season Talk: Eli’s the fastest dude in the class. He won nine races last year and threw it away with some crashes and a mechanical. If he stays away from mistakes, he’ll win this 450SX title going away.

Reality: Uh, yeah, everyone pretty much nailed this one, but unfortunately for Tomac and Kawasaki, mistakes have doomed him. But when he’s not making those, he’s the fastest man in the USA on a dirt bike. Onto the outdoors for Eli.

Pre-Season Talk: Well, how was the arm/elbow that he hurt so badly last year? Can he be the same guy he was before? The pre-season talk was that he looked good on the track, but we’d know more once A1 came. Complete question mark for most of us.

Reality: Still a question mark, really. He crashed in San Diego and missed the rest of supercross. Before that? Well, some vintage Roczen, some not so-vintage Roczen. Let’s talk after Hangtown to further assess.

Pre-Season Talk: Can absolutely win this 250SX title if he finds the consistency to go with his obvious speed. He’s got to improve his starts, but he’s got a great bike under him, and although Wil Hahn as manager would probably hold him back, we still think he can do it.

Reality: Aaron’s won four out of nine races and did it both from coming from behind and dominating. Whatever he’s needed to do, he has done, and although his starts haven’t gotten better (average starting position last year was 7.0, and this year it’s 6.6), he’s been generally able to be, you know, faster than the other guys in the class. Best of all, Hahn has just stayed out the way for the most part.

Pre-Season Talk: Looks good to repeat—he’s on a roll and has a great program, team, bike, and confidence to bring home another title. The man to beat, really.

Reality: Well, although his lead in the series is bigger going into Vegas than it was last year, it definitely hasn’t seemed easy this year, has it? He won the opener but that felt like a bit of luck when almost the entire field went down in the first turn, and then Austin Forkner beat him the next two weeks. His starts weren’t great, but he’s won three races, the field has gone down with injuries, and here he sits. Funny how life works, huh?

Pre-Season Talk: He’ll definitely win races and is one of three guys (Plessinger, Savatgy) who are the favorites for the title. He’s got to calm down with the crashes, though.

Reality: He has calmed down the crashes, although there’s still a tad of nuttiness that happens to him from time to time. His starts haven’t been good, but he hasn’t gotten hurt! He also, somehow, amazingly, hasn’t won a race this year, either. We were all so wrong.

Pre-Season Talk: Well, he should’ve won the East Region last year, but threw it away in a series of crashes while he was all by himself. Then in Vegas, somehow he got caught by Osborne when he had a nice lead. Joey’s solid on many levels and maybe he’ll figure this out, but there are question marks for sure.

Reality: Won one race, got the most holeshots in the class, has a better lap one position than Plessinger, AC, and McElrath by three positions, but somehow has only led the third-most laps. He’s put himself in the best position after the gate drops to win races, but sits 22 back of Plessinger. In short, we were right to wonder what was up. I don’t know Savatgy that well, but to me, his riding errors scream of needing a new environment/training program. Maybe he just needs to shake things up?

Reality: Won the opener, won last weekend, two other second-places, and if it weren’t for one bad race (just like last year), he’d be right there in the championship. I look forward to the 2019 SX preview shows/pods where we don’t mention Shane at all. Again.

Pre-Season Talk: I don’t know, man, 2017 was rough. He’s on MotoConcepts, which is one step away from a pick-up truck, he didn’t seem to adapt to the Honda, but hey, at least he’s killing it down in Australia, right? Oh yeah, the Triple Crown format will be a good thing for him IF—and that’s a big if—he’s better this year.

Reality: Missed the mark on this one. With a better off-season program and more time on the new Honda, Brayton came in like gangbusters, got great starts, and showed he’s far from done. His team did a good job, Vince Friese improved this year, and manager Tony Alessi seems to be doing a good job for JB10. Did we mention he won Daytona? Did we mention that he’s been great at the Triple Crown races? We got almost nothing right when it came to Brayton and 2018.

Pre-Season Talk: This is going to be a really tough deal for Reed. He’s coming off a serious ankle injury and hasn’t been able to ride but four times before SX. He’s on a new bike with a privateer effort, and man, this could get ugly. But he’ll be the most popular rider in the pits, and let’s hope he can get close to top five by the end of the year.

Reality: Nailed it, unfortunately. See you in 2019!

Thanks for reading, it’s the penultimate Observations column of the supercross season! Email me at matthes@racerxonline.com if you want to tell me what your thoughts are on this whole deal.