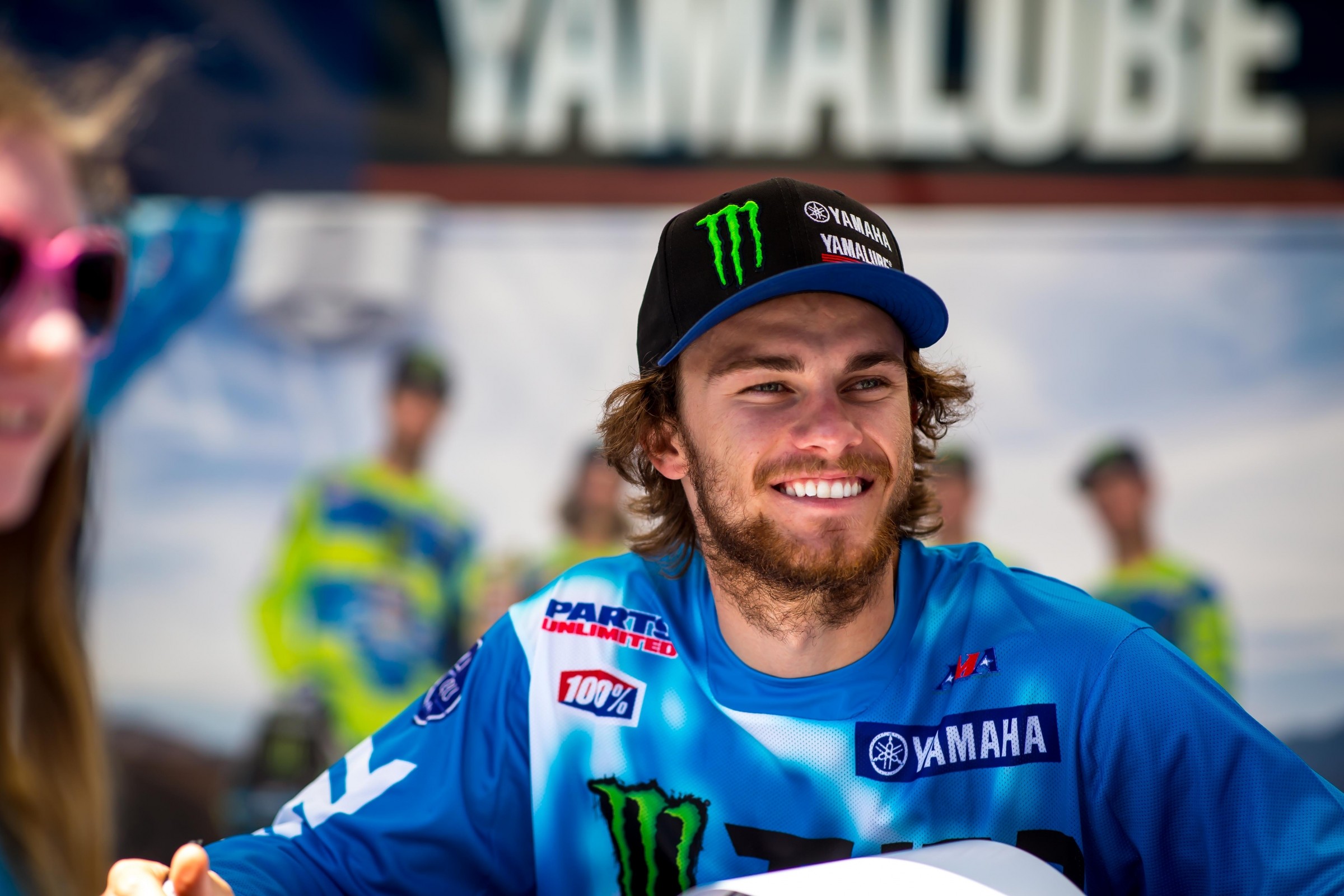 Thus far, Hamilton, Ohio’s Aaron Plessinger has had an excellent 2018 AMA 250SX West Region Championship season. With four wins, 33 laps led and an average finishing position of 3.2, the Monster Energy/Yamalube/Star Racing Yamaha rider leads the points heading into this weekend’s finale at Sam Boyd Stadium in Las Vegas. Still, there is work to do if he wants to be the first Buckeye since Gary Semics way back in 1974 to win a supercross championship.

Plessinger is in a good place. With 13 points to spare over second-place racer Adam Cianciarulo, a top-ten finish come Saturday night will be enough to clinch his first AMA Supercross championship. Yet as we all know, racing—especially supercross racing—is a tricky business and one in which a rider never really knows how things are going to shake out;  just ask Jason Anderson.

Taking all of that into account, Plessinger knows exactly what the scorecard reads when he goes to the starting gate for the last supercross race of 2018. On Monday afternoon Racer X rang up the #23 rider to talk about Salt Lake City as well as the next and final stop of his stadium tour. Chilled out and in good spirits, he gave us a read on the reality of his competitive surroundings. Check it out.

Racer X: Okay Aaron, just what are you up to this Monday afternoon?
Aaron Plessinger: I’m just driving back to the house. I’m on the way back home after doing some pictures today.

What are the pictures for?
They’ll be for outdoors. They’re like the hero shots they do for supercross and outdoors to show on TV when they cut to commercials and stuff.

Nice. So what’s your takeaway from Saturday’s race over in Salt Lake City? You placed fourth, which was a solid result, but perhaps you wanted more?
Yeah, for sure. I wasn’t really that comfortable all day. I went into practice, and that actually went really good and I qualified second. Still, all day I was kind of off of my comfort level. I didn’t really gel with that track too good. It was rocky and it was slick and it wasn’t real good for me. I won my heat race and went into the main and got a pretty good start. I was in fourth, and then Adam [Cianciarulo] and Shane [McElrath] messed up and I got around them, and I was right behind Joey [Savatgy], and I just kind of sat back and didn’t really try anything because I know the Kawasaki guys are kind of gunning for me right now. I just kind of sat back and chilled for pretty much the rest of the race after both Adam and Shane got around me. I didn’t really want to push it too hard and take myself out of the championship. Yeah, I just chilled back there and got a solid fourth and didn’t lose too many points, and now we’re going into this weekend. If I’m feeling good, I might win it and if I’m not feeling too good, I’m just going to chill and whatever happens, happens, you know?

Is that the sort of approach you took at Salt Lake City?
Yeah, I mean, I’m still racing really hard, but in the big picture, I was just kind of trying to keep it on two wheels and not lose too many points to Adam. I knew him and Shane and Joey were riding really good, so I just kind of said, “You guys can have this one. I’ll be there next weekend.”

Come the main event on Saturday night, you still have 13 points to work with.
Yeah, for sure. I have to finish in the top ten this weekend and that’ll secure it. The way it stands is that if Adam were to win the race, I would need to get tenth and I would still win it. Anywhere in the top ten and I’ll be good.

How has being the championship leader for most of the season sat with you? Have you felt the pressure at all, or have you been able to love with it pretty well?
It’s been alright. It hasn’t been too bad for me. It hasn’t been too much pressure. I think I’ve grown to like it, actually. It hasn’t seemed like it’s all eyes on me, but I haven’t really been paying attention. I’ve really just been focused on me and my riding and what I’m doing during the day and during the week. I’ve just tried to keep focused and push forward to this weekend, and it’s worked out by me doing things that way. I’m handling it pretty well right now.

What do you have planned for this week? Will you ride much?
Yeah, I’ll probably ride a day of supercross and then a day of motocross just to keep it light and keep riding and keep my flow going. It should be a really good week. It’s starting out pretty good. We got a cloudy day today, and I like me some clouds.

Yeah, you’re used to clouds where you come from. Every day can look exactly the same here in Southern California. It can get a bit old at times.
Yeah, no doubt. You can go weeks and weeks where you don’t see clouds and then you’ll get one day that’s just perfect overcast and perfect weather. Today is one of those days.

When will you make your way over to Vegas?
We actually have press day, so we’ll go over there probably on Thursday and then do press on Friday and then race on Saturday.

Do you like the Las Vegas track?
I like it—I like Vegas a lot. The last few years, I’ve done pretty well there. In 2016 in the mud, I actually bent my shifter around my footpeg and had to pull in. When I got back out there, I pulled up on Malcolm Stewart for fourth place, so that was a pretty good race for me. Then last year I got caught up in a start crash and came back to third, so I really gel with Vegas and I like the venue and the layout really well. Hopefully it works out in my favor.

With the 250SX East Region guys tossed into the mix this Saturday, will that make a difference to you, or is it just another race?
I think it’s just another race. We did the one Showdown race this year at Indianapolis and I had to come from last place that time, too, and I got fifth. I know I can do it if I have to come from way back in the pack. When I look back to that race, a fifth wasn’t what I really wanted, but being that I was pretty much stuck on a Tuff Block and couldn’t go anywhere for a couple seconds, it’s pretty relieving to know that I can come back and pass all those guys and get back to the top five from pretty much last place.

Have you and your team put any kind of plan in place for Saturday’s race?
Yeah, they have their plans and I’ll definitely listen to them, but if I’m really feeling good and I know I can get around somebody for the win, I’m probably going to get around them and go for the win. If I’m not feeling it and not riding like myself, I’ll sit back and kind of try to be safe and not take myself out of it. Being that I really like Vegas, I think that I’m going to get off to a good start and try to put it to these boys.

I don’t know if you can talk about it yet, but do you know what’s up for you and the 2019 season yet?
We’re getting closer in knowing, but it’ll be a little bit longer before I can talk about it.

Okay Aaron, one last thing: It’s been a long time coming for a racer from Ohio to win a supercross title, huh?
Oh yeah. No doubt! It’s been a while, so I’m going to put Ohio back on the map.