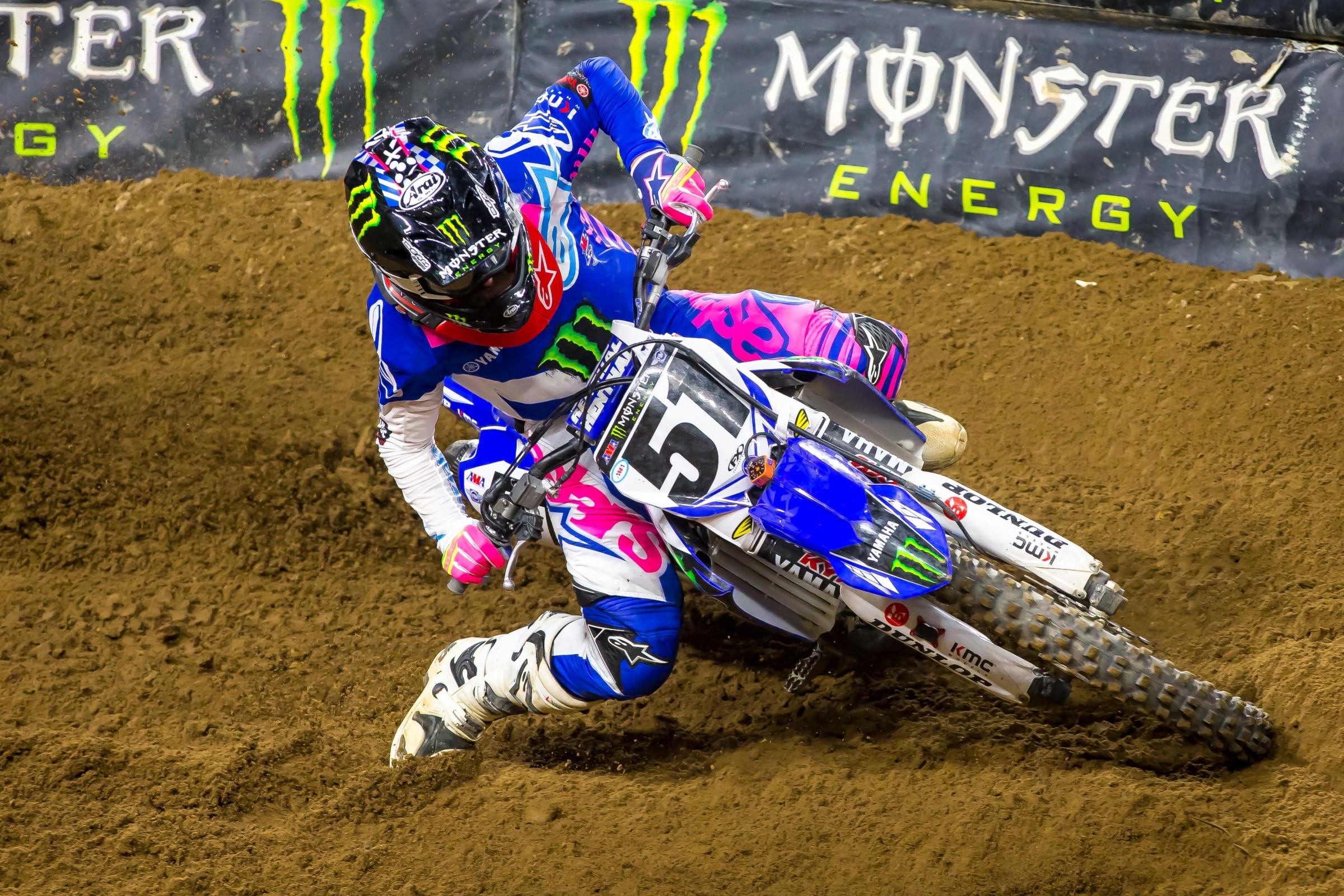 In last week's Staging Area, Jason Thomas wrote, "The U.S. Bank Stadium might be my favorite venue of the season after debuting last year. The attention to detail and sheer magnitude is simply next-level. It’s a great home to supercross and a round of the series I truly look forward to." Now that the final Triple Crown event of the season is over, the veteran of 15-plus years of pro supercross racing grabbed some photos to explain how things went.

In the photo below, Jason Anderson is entering the second of two back-to-back whoop sections. He has taken the rut in the background that got cut down early and allowed riders to get back to the middle/left side of the whoops. That side was tougher to get to, but it was also used less and a bit more hospitable. It also set riders up to enter the following berm at a more efficient angle and slingshot back onto the start straight.

Railing the berm before the whoops was faster in the beginning of the section, but that time was lost at the end of the section because of the hard right turn after. It’s give-and-take with sections like this, and many times, there is no right or wrong. Eli Tomac was using the outside in the first berm, railing down the right side of the whoops but suffering a bit in the next right turn. Anderson was slowing to go inside but would carry speed through the next right and make it back up. It’s somewhat of a yo-yo effect from beginning to end when watching a gap from rider to rider.

As for his form, he’s doing everything right. He’s in the center of the bike when many riders would want to lean further back. This allows him to keep his elbows bent instead of fully locked, like you’ll see often times from lesser-skilled riders. He is more prepared for the bike doing something unexpected with this positioning. His feet are pushing against the pegs, which gives him leverage over the rear of the bike. When standing flat-footed, riders are much more of a passenger than in control. His finger is on the clutch, giving him the ability to pick up RPM if needed. His back is straight and his head is leaned forward over the front of the bike. This is full attack position.

In the photo below, Blake Baggett flies the friendly Minneapolis skies in this photo. This is the jump over the finish line, just after a sweeping right-hand turn. Blake likes to position himself very far forward and many times can be seen in this exact technique. With the previous right-hand turn being a bit slick and riders ensuring front-end traction, it makes sense why he would be leaning forward. He will be able to accelerate hard with this much leverage over the bike, and he’s clearly ready to go—look at his throttle already turned open, and he’s still midair.

Below, Justin Barcia is railing through the turn after the finish line, but maybe not in the ideal way he’d like. When sand is added to the top of a hard supercross base, it usually becomes unpredictable and slick underneath. The sand is just begging for huge RPM and aggression, but if that rear tire digs through the sand and spins up, that RPM will have you in for a wild ride. In this photo, the rear tire has begun to lose grip, and he’s dangerously close to a low-side crash here. He’s dropped his inside leg to keep upright, and his 450 power will drag him forward and out of trouble. He most likely blew the berm out, but things could have been worse. This turn looked really difficult to get exactly right. I watched rider after rider spinning all over the place as they headed through the sand rollers. The most effective way through was to stay calm and hit the line in the sweet spot of traction. In a main event where riders are dive-bombing toward you for a block pass, it’s very difficult to stay calm and not over-ride the turn. Go back and watch the racing through this turn and more times than not, riders were out of position and struggling to stay in the line. Their intensity and urgency forced mistakes where precision was needed.

The sequence of photos below are of Austin Forkner exiting the first turn. There was a rhythm section and riders were opting for a 2-2-3 combo almost without exception. As Austin accelerates through the turn, that drive is pushing him to the outside. He is still turning through his acceleration, so he hasn’t yet straightened up in accordance with the direction of the racetrack. With his level of control, though, he knows he can use the jumps to not only straighten up, but he will also be able to move back to the complete other side of the track. With the next turn being a right-hander and also needing a lot of speed for the following seat-bounce triple, he will want to enter from the left side and open the turn up.

As he leaves the first jump, he begins to lean his body weight to the left/inside, reigning in that outward drive and momentum. Notice his front wheel is turned to the right a bit, also. Before he lands, he will whip that front wheel back to just left of center and start pivoting back to the left. He will slowly drift left off of each jump and align himself to use the entrance of the berm on the left side. That will allow the most corner speed and easiest run-up to the small triple take-off. This is basic inside-to-outside moto strategy, but he is utilizing it through a rhythm section and midair, which is a bit more advanced than most riders can execute.

The two photos below of Jeremy Martin and Zach Osborne are in the same section as Forkner above. They are both in the same process of moving back to the right, as in Forkner’s sequence. Knowing how important it is to be on the left side of the track in the following corner, look how hard they are leaning in the air. Racing, especially on smaller bikes, is all about momentum. Knowing what angle is necessary to carry speed and how to make that angle possible is just one example of how pro riders go so fast.