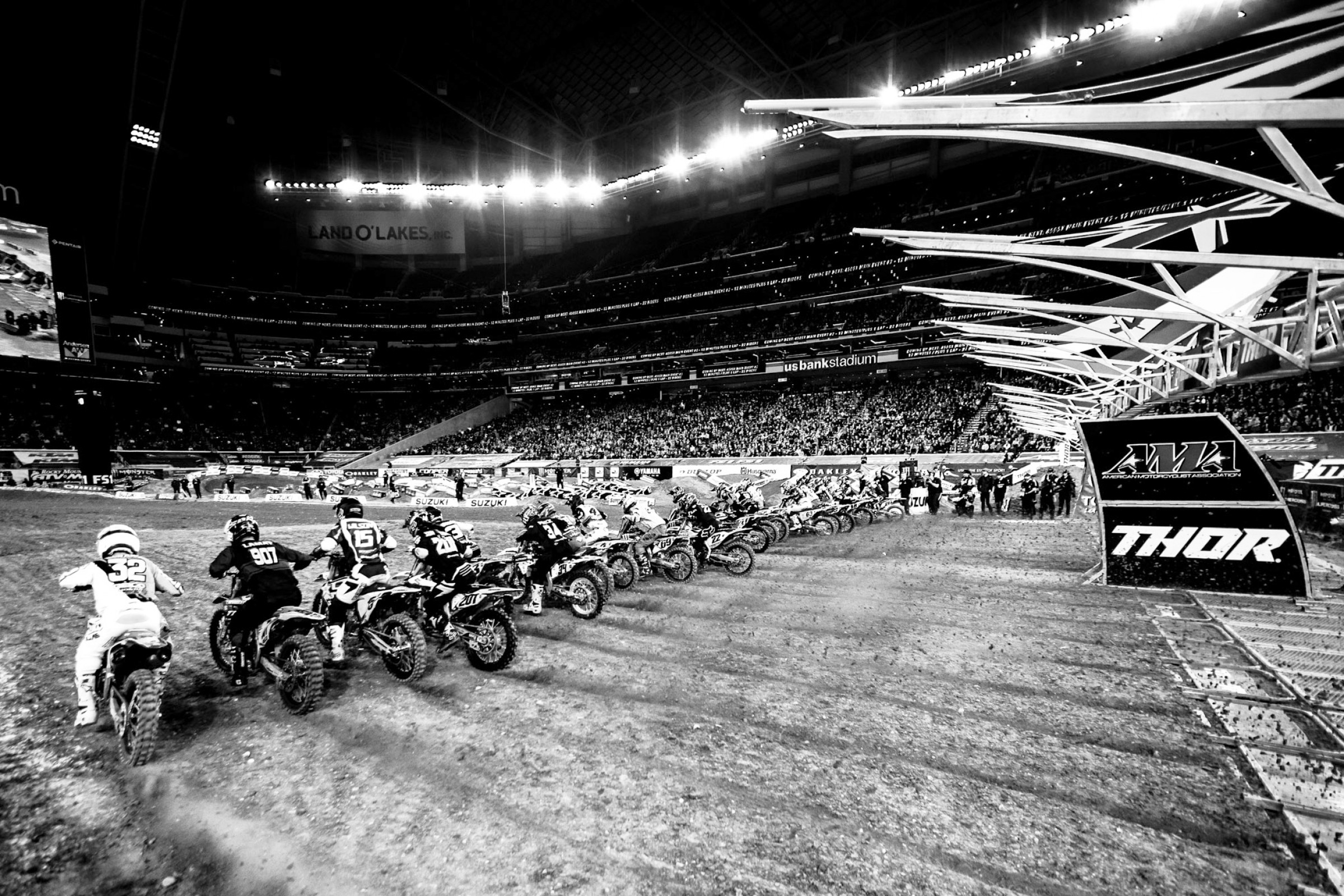 As another amazing 450 LCQ battle began to develop, we realized something. Last week, AJ Catanzaro and CycleTrader.com/Rock River Yamaha's Alex Ray, contributors to this website, had a battle in the mud. This weekend, they battled in the LCQ again! Ray was in a transfer spot early in the race but stalled. He lost several spots but put in a huge charge, including passing AJ for fifth. We were curious to hear two sides of the same battle.

Things turned even crazier that night as Ray, in fifth, closed in on fourth-place Bubba Pauli and third-place Deven Raper. Only the top four make the main, and all three riders converged for the final two transfer spots on the last lap. Pauli totally sent it in the final rhythm lane. He nearly crashed, but instead ended up going faster in true whiskey-throttle fashion. When in doubt, pin it! He and Raper nearly collided, but they stayed up and led Ray to the finish. Final margin between all three riders? .08 seconds. Raper and Pauli in, Ray and Catanzaro out.

Here are all four riders sharing their thoughts on another classic LCQ. You can watch the race right here, starting at 4:28:30.

AJ Catanzaro: Unfortunately, I wouldn’t really consider myself a part of the battle, even though I caught up to fifth and was there most of the race. I broke a part internally in my fork (freak thing) in qualifying and went into the LCQ not having jumped three major obstacles. Of course, I gave it my best effort like always, but I was really just being smart about it. Without doing a couple of the jumps, I didn’t stand a chance, but I did witness a lot of the chaos around me. (Why am I always the turtle in these stories?)

First, I saw #722 [Adam Enticknap] down in the 90-degree right-hand turn, then I saw Ray down after the whoops. I passed a couple people in the whoops and somehow found myself in fifth, even though I was crawling around the rest of the track. I could see Raper and Pauli up in front of me doing their thing when I heard the thunder behind me—I swear you can hear A-Ray’s bike from half a track behind you! He was riding well and attacking, so I essentially let him by so that I wouldn’t get myself taken out. After that, I really just watched the three guys in front of me tighten up, and from my angle, it looked like a photo finish between all three of them! I was secretly hoping that they would all take each other out in the last turn and I would roll in for an easy transfer spot, but no dice. Props to those two for making their first mains of the season. They won’t be beating me at my home race next weekend, though!

Alex Ray: My LCQ started off really well. Got a good start, and within the first few laps I had moved up to second and had it easy. The whoops after the triple got a little tricky because we came into them so fast. Second lap I'm all by myself and just missed a whoop, and it may have been a little bit of weakness still from my injury, but I got a little catawampus and tipped over in the turn, which pushed me back to 11th or 12th. At that point, I got back going and just shut my brain off and rode as hard as I could to get to the front. Worked my way up to third and fourth. Raper and Bubba were right in front of me the last lap, and they were going for it! Bubba did the on-on-off last lap and almost killed Raper! I caught up at the last turn, but it wasn't enough. I think like .2 was the gap at the finish. I was bummed, but very happy with my riding after being off the bike for so long.

Bubba Pauli: The LCQ last weekend in Minneapolis was wild, from a mediocre start to working my way up into the final transfer spot. Coming into the last couple laps, I saw I was catching Raper a bit and I had a good gap behind me to Catanzaro. Easy, just ride smooth to the finish. The white flag came out and I saw A-Ray was coming fast, so I had to up my pace a bit. I went through the whoops faster than Raper and almost got to the inside of him onto the start straight, but why be overly aggressive in a transfer spot? My first thought was, okay, I have two 180s coming up with Alex behind me—not the best situation. We made it through those, three 90s left, I’m good.

My “on-on-off-2-3” line was faster than Raper’s line in the last rhythm lane. Making sure I held off Alex, I had to nail it. Unfortunately, I got a little squirrelly getting off the last table and started crossing over, going underneath Raper, feet off the pegs. I was just trying to get back to the inside and block the last possible line to the finish. Slapping and sliding, I got to the finish and made my first main of the year. That felt really good—almost a relief, honestly. A couple fist pumps, then I scooped up my mechanic and headed out of the stadium to the pits, where my focus immediately shifted to the three main events. Done—next! Time to go racing.

Deven Raper: For the first time this season, I finally got a good start! I started out in second with a whole bunch of guys who had made multiple mains this season behind me. The game plan was simply to hit my marks and not mess this up. With those back-to-back whoop sections, it wasn’t easy—just ask A-Ray. He passed me on the second lap and right away got tossed off the track through the whoops. I was back up in second now and my plan was working. I stayed there for a couple laps until Kyle Cunningham got by me, and by this point, I was wondering when the hell this white flag was going to come out because I might have been playing it too safe. That last transfer spot was starting to get too close for comfort. Finally it was the last lap, and I was thinking one more pass through these whoops and I got it. Well, I had my worst pass through them yet, and all of a sudden, fourth and fifth are all over me! I hit the next three rhythm sections perfectly, but Pauli in fourth got out of shape in the last rhythm lane before the finish and we came inches from connecting with each other, which would have been devastating. We came out clean, and I crossed the finish in third with a fist pump and the weight of the world off my shoulders.

As they mentioned in the broadcast, it has been since March 12, 2016, in Toronto that I made my last main event. I've had so many times since then where I came up just short by getting fifth in the LCQs, crashing while in the transfer position, getting taken out by dumb moves from other riders while in transfer positions, to the worst part—suffering a thumb injury after round two last season and having to get surgery and not being able to come back until the last four rounds. I put in more work than I ever have coming into this season and I understand the competition is deeper than it has ever been, but as I kept getting these failed attempts at these main events, everything adding up from the last few years just felt like torture! So this main in Minneapolis feels like the first one all over again. I'm so stoked about it and looking forward to these last three rounds to keep the momentum going!

Through all of this has been unconditional support from Dale at RJC Racing out of my hometown, Mesa, Arizona. Ever since I met him at local race in 2014 I got a second chance at a career in SX. My parents weren't going to support me forever and I was an adult now, but working a 9-to-5 didn't allow me much practice to compete against the best in the world. He took me under his wing and I really got to work. Making night shows was the first step, and by the end of 2015, I made my first two main events. Kelly's Kawasaki, out of my hometown, followed with additional support in their demo bike program, and Kawasaki Racing is there for me if need be. I also want to thank Scott at DSC Construction out of Riverside, California, for getting my bike to the races out of the Privateer Hero/Ted Park's TPJ rig, and the rest of my sponsors that make this puzzle happen, thank you all so much for making this possible! Showa Suspension, O’Neal, Action Sports Canopies, Valley Motocross, Shoei, VonZipper, FMF, Rekluse, Magik Graphics, Acerbis, Dunlop, X-trig, MotoSeat, Renthal, RK/Excel, Dubya, CryoHeat, JE-Pistons, No-Toil, Maxima, Cycleogical, Hammer Nutrition, Galfer, MoTool, Joe Mabbet, and my boys that spend their time at the track with me: Larry Hoesli, Blake McCarthy, Larry Fitz, Bryan McDonald, and Jay Whipple. Thanks again!