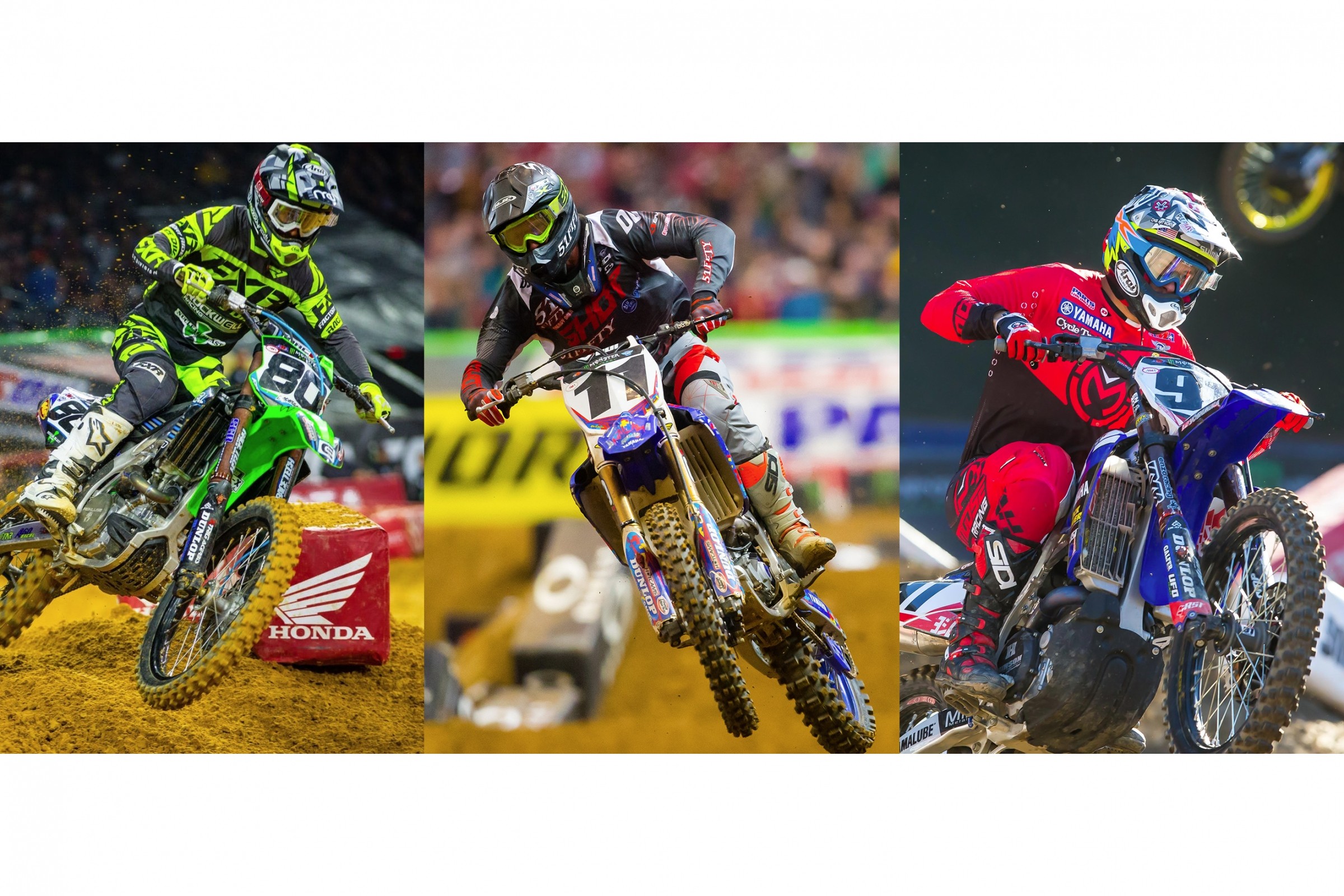 3 on 3 Questions from Seattle

We brought in three riders who braved the mud on Saturday in Seattle: 51Fifty Energy Drink Yamaha’s Kyle Chisholm, who placed eighth in the 250SX West Region; CycleTrader.com/Rock River Yamaha’s Alex Ray, who recently returned to racing after injury; and AJ Catanzaro.

1. How gnarly was Seattle for you? All-timer or just another mudder?

AJ Catanzaro: I’ve ridden in more muddy/wet conditions, but this was easily the least traction I’ve ever had to deal with. In qualifying I could have sworn we were just riding on wet wooden boards. My throttle control is second to none, and I was ALL OVER THE PLACE.

Kyle Chisholm: Seattle was muddy! It wasn't an all-time mudder, though. I've done a lot of mud races through all of my years of racing. I remember many times at Loretta Lynn's having some gnarly mudders and growing up in Florida, in the summertime it rains daily, so I've had a lot of mudders through my amateur days. I also raced Daytona in 2008 for that gnarly mud race, and Daytona 2012 was a pretty nasty one as well. But this race was a little different.

The gnarly Daytona race in 2008 was more outdoor-style mud while Seattle was a full-on supercross track in the mud, which makes it really tough. But the part that made it different was just how sticky the dirt was. It was crazy! I don't know that I've ridden on mud that sticky. The ruts got so deep, and there were so many! You were basically in a rut around the entire track. You would go over a jump (and get no air) and go right into another rut. Balance is so important in these conditions. The bikes were so heavy, and it makes it so hard to keep it upright. Also, the mud on our boots and helmets was heavy, too. My quad muscles and my neck were sore the next day from the weight of the gear. So, it was a gnarly one. Not the gnarliest, but definitely unique for me.

Alex Ray: Seattle was crazy, to say the least. Yes, it was probably the worst mudder I’ve been part of in SX. It was so sticky and rutty in some spots, but places like the whoops were like riding on glass, it was so slick. I was coming back from an injury, so I wasn’t full-send, but I still don’t think I would have jumped anything.

2. What was the biggest challenge?

Catanzaro: The biggest challenge for me personally was probably traction—front-end traction to be specific. I couldn’t keep the front end planted anywhere, which made it very difficult to get lined up for a rut. I would aim one direction and end up four ruts over. Going from extremely deep ruts to greasy slop and then back was extremely challenging.

One thing I thought would be a challenge but didn’t turn out to be an issue was vision. My roll-offs worked without a hitch, so props to Kuzo for prepping my 100% goggles to perfection.

Chisholm: It's hard to pick just one thing, but I'd say the toughest part was just adapting to the track each time out. With the schedule shortened, we only got one ten-minute practice/qualifier, then a couple hour break before the heat race, and then the main. So, you had to be on your game each time out there, but it was tough to predict what it would be like. On track walk, I was thinking, "Okay, I'll just double through here, maybe go inside there and roll and then double to get out of the ruts between the jumps," and "Oh, this double will be tough but you have to get it in order to do the triple.” So, I went from thinking that I could at least double through sections and maybe hit the triples, to what you eventually saw on TV. I knew we couldn't triple through the rhythms, but I thought we'd at least double.

We were second onto the track in practice and the ruts weren't too developed yet. I thought it'd be soft and have deep ruts right away, but what I found was mud that was so slick, it was like riding on ice with ruts. Just so slippery. Then by the heat race, the dirt had gotten so sticky it was like glue and the ruts had gotten deeper. They didn't do much track work, so the ruts were everywhere. Then you go to the main (and no one did a hot lap) and the ruts had gotten even deeper somehow. At that point, I was just trying to find lines that kept me out of the super deep lines so I didn't get stuck anywhere. Also I tried not to be too hard on the engine. But it was so hard to remember which ruts connected with the next rut, and if you picked a bad one, you were screwed for the whole section because there wasn't any getting out of the rut once you were in it. My X-Brand goggle vision was good, though. I ran tear-offs, by the way, and had no problems.

Ray: My biggest challenge wasn’t the track, but reminding myself to be easy on the clutch and to stay up on the pegs. I fry clutches when the track is dry, so I was going through them pretty fast on Saturday. I caught myself sitting down a lot in the ruts, and I was constantly reminding myself to stand up and not to be lazy in those type of conditions. The toughest part of the track for me was the whoops because they were like glass. They were slicker than a whiskey fart! They also had edges on them that would shoot out you off the track in a heartbeat. I noticed they took them out in the LCQ.

3. Did you learn anything throughout the day/night?

Catanzaro: Great question! I was learning something new every single lap. In fact, I wish the races were longer because I felt like I was really starting to get into my groove.

First, we softened my forks to help get more of a front end feel. After that was gear selection. At the beginning of the day, I was trying to ride in second gear most of the track. Although this helped with traction under acceleration, it was just too tall and I felt as if I was going to stall at any moment. I quickly made the decision to just ride in first gear only, which I practiced all week on my turn track (which happened to be really muddy as well).

Another big thing I was experimenting with was my body position. I would play around with different styles to see what worked best. Some sections would work better to stay on the seat, others were better if you stood. You couldn’t go from sitting to standing in certain areas because taking the weight off the seat would cause you to break traction.

It really felt like I was learning every lap as I continued to play a game of guess and check. Wish I could have kept spinning laps, to be honest with you.

Chisholm: To be honest, I don't think I really learned much throughout the day other than I needed to go faster because I didn't win. Not that I don't think you can learn something new, but I've done so many mud races that I have a pretty good idea of what it takes to be successful in the mud.

First, you have to mentally prepare. You have to have your game plan and try to execute it. And your attitude is huge in these conditions. You need to be loose and relaxed and just have fun with it. If you're all mad and negative about the mud, it usually leads to not riding it like you need to. The physical prep like goggles and gear selection is done. Decide what goggle style you want (roll-off or tear-off), put foam on the helmet, spray silicone on everything so the mud doesn't stick, and tape a goggle lens to your visor so you have a longer visor to block the mud. Then you have to focus on your start so you have a clear track and can save your goggles. You have to be calculated in picking lines and making passes, and you have to do your best to limit mistakes and not crash at all—a fine balance of being careful but not too careful. Also, you have to be smart in saving your bike and not being too hard on the engine and clutch. I know all of these things; it's just a matter of executing them all to plan to be successful. Aaron Plessinger was a fine example of all of these things. He's always great in these conditions.

When I won the 125 B Mod title at Loretta's in 2003, our second moto was a nasty mudder and I won that moto. I did all of the above perfectly. So, yeah, I didn't really learn anything other than that I didn't execute my plan the best and I needed to go faster.

Ray: Yeah, I learned quite a few things throughout the day—obviously the clutch situation and also that going balls-out trying to get to the front after a bad start is a bad idea! Getting catawampus everywhere just results in going down or ruining the bike. I did go from a paddle tire to a normal tire because of the slick spots in a few parts of the track. That was the only change I made to the bike.

I rode a lot of muddy conditions growing up, but haven’t in a long time. It took a bit for some of that to come back, and, obviously, me being off the bike for a month and a half didn’t help, either. I don’t think I got out of first gear other than during the straightaway sections because the track was so deep. Seattle was gnarly, period. Even though we ended with a DNF, it was nice to play in the mud.