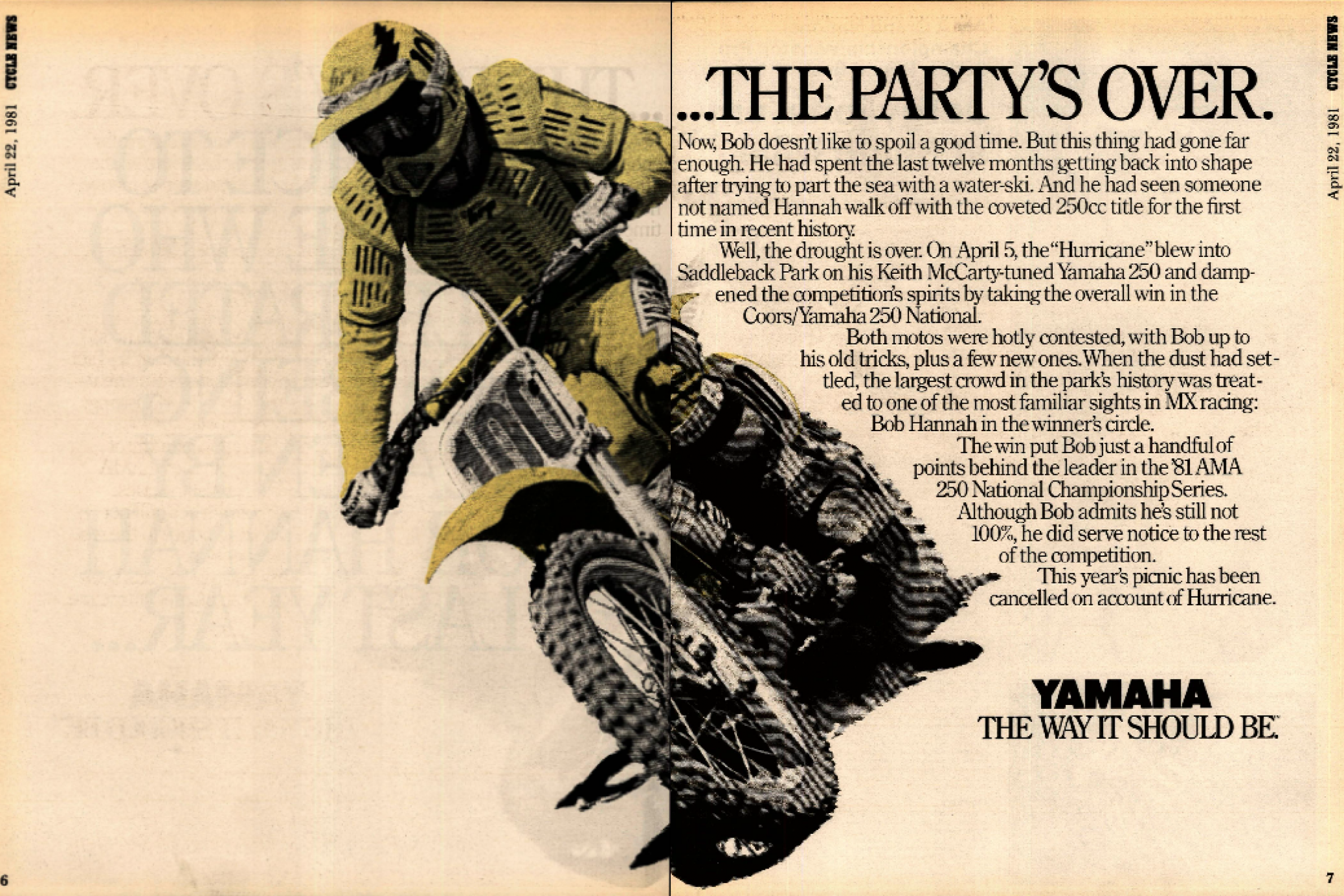 On This Day in Moto April 5

In the Lites class, series points leader Trey Canard crashed early in the race and slipped back to fourth, allowing race winner Ryan Villopoto to pick up seven points on the Factory Connection Honda rider in the points chase. Honda's Josh Grant and KTM's Martin Davalos were second and third.

In one of the all-time epic motocross battles in AMA history, Bob "Hurricane" Hannah and Kent "the Rhinestone Cowboy" Howerton clashed at the Saddleback Park AMA 250 National. Hannah was coming off of a one-year hiatus after suffering a broken leg in a waterskiing accident, costing him the entire 1980 season. That allowed Suzuki's Howerton to more or less take over as America's premier 250cc rider. At the much-awaited '81 opener at Hangtown, Howerton won, which left Yamaha's Hannah seething. One week later he went to Saddleback determined to win at all costs, and he and Howerton ended up ramming into one and other often. In the end, Hannah proved to have the advantage and won the day, though Howerton would have the last laugh, winning another AMA 250cc Motocross Championship.

In the 125 Class, Suzuki's Mark Barnett started his pursuit of a second straight title with another win at Saddleback, this time ahead of Kawasaki's Jeff Ward, Honda's Johnny O'Mara, and Yamaha's Scott Burnworth.

One year after local hero Jeff Emig ended his 13-race winning streak, Jeremy McGrath returned to St. Louis and got even by beating Emig aboard his Suzuki RM250. Emig was second aboard the Kawasaki, trying to keep Jeremy from getting hot and gobbling up his points lead. Finishing third was Yamaha's Ezra Lusk.

In the 125 class, Honda of Troy's Stephane Roncada got the win aboard a CR125, with Yamaha-mounted Greg Schnell second and FMF Honda's Brock Sellards third.

The dance between Chad Reed and Ricky Carmichael continued at the Pontiac Silverdome, with Yamaha's Reed taking another win and Honda's Carmichael finishing second, minimizing the points damage. RC's teammate Ernesto Fonseca would finish third. The podium of Reed, Carmichael and Fonseca would be what we saw at each of the last six rounds in 2003, and in that order!