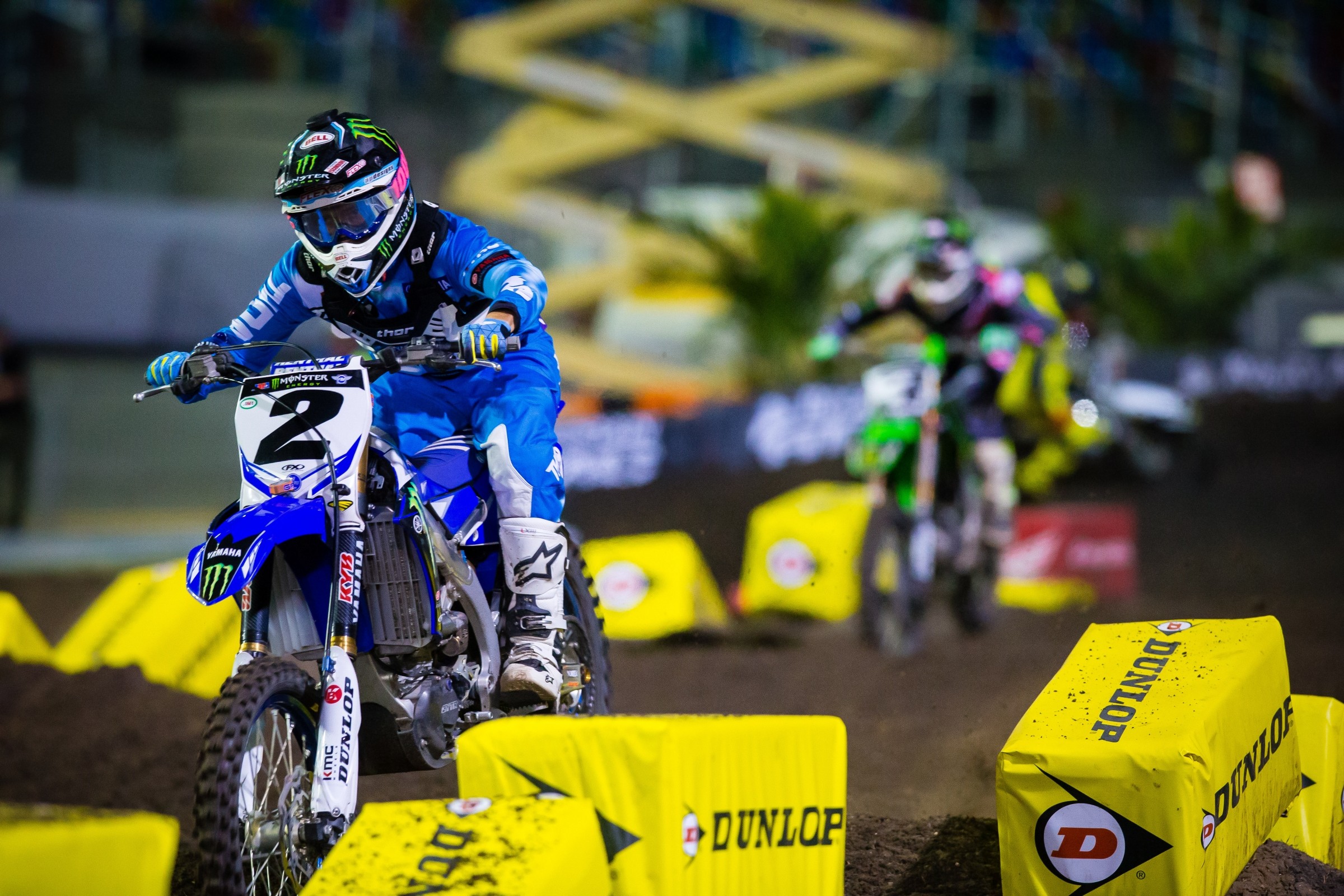 Comment: Barcia broke his hand in Arlington. He underwent surgery and is tentatively looking at a return to racing in Seattle.

Comment: Bisceglia will miss Indianapolis with a broken hand suffered in Atlanta.

Comment: Bogle hopes to get back to racing at the start of the Lucas Oil Pro Motocross Championship after breaking his humerus and sustaining a small fracture in his L2 vertebrae in San Diego.

Comment: Enticknap broke his pelvis in three places while practicing. He’s out for the foreseeable future.

Comment: There is no timetable on Grant’s return. Grant is currently sidelined after fracturing his right leg in Arlington.

Comment: Martinez sustained a split depression plateau fracture of his tibia and "tore something in his knee" in Daytona. He's undergone surgery and will miss the remainder of Monster Energy Supercross.

Comment: Noren is done racing for the year due to a torn ligament in his hand and damage stemming from that injury. He’s also dealing with some nagging ligament problems in his knee.

Comment: Ray is hoping to return for Seattle after dislocating his wrist and rupturing his patella tendon during practice.

Comment: Roczen hopes to be ready for Lucas Oil Pro Motocross after shattering his hand, dislocating metacarpals, and tearing ligaments in his hand in San Diego.

Comment: Tedder had a crash in Atlanta that resulted in a footpeg puncturing his shin. Unbeknownst to Tedder, the wound became infected and, without warning, “blew up” two weeks later. Unable to walk, Tedder went to the hospital and learned he’d developed a Staph infection. He underwent surgery to clean it out and is looking to be back by Seattle.

Comment: Seely is out with a fractured sacrum and pelvis suffered in Tampa. He won’t return before supercross ends.

Comment: Webb crashed during the week before St. Louis and sustained a shoulder injury/dislocation. He tried to race in St. Louis but wasn’t quite ready, which led to a crash in the first practice session. He sat the night out. It will be a “game time” decision whether or not he’ll race in Indy.

Comment: Alves wrote on Instagram that due to a dislocated shoulder sustained prior to St. Louis he will sit out this weekend.

Comment: Davalos has been fighting issues all season that stem from a crash in Arlington. After crashing out at St. Louis, the decision was made to sit out until he’s 100 percent again. An exact return date is yet to be determined.

Hey everyone, I’m disappointed to announce that I won’t be racing this weekend.... after the Dallas incident I’ve tried my hardest to race, despite doctors recommendations but doing it while injured has really only hurt me worse. I sustained 3 herniated discs in my C-spine that’s caused neuralgia in my left arm and a torn MCL in my knee, trying to be competitive like this has been impossible. I’ve tried my hardest but my body just doesn’t allow me to preform and it has become too risky to race. We’ve made the decision to allow my body to heal. I wanna thank everybody that’s supported me and that understands how gnarly this sport is. We all work so hard to be out there racing and and we push our bodies to the max. Also thanks to the team @pcraceteam for sticking behind me and providing me with the best motorcycle out there. I’ll be back when I feel like I did in Dallas ready to battle at ?%

Comment: Decotis had a big crash in Daytona and fractured some ribs and his L2 and L3 vertebrae. The team is expecting an update on when he’ll be able to get back to racing soon.

Comment: Hampshire crashed in Daytona, sustaining fractures to his T3 and T4 vertebrae, fractured ribs, and some “small punctures/lacerations to the lungs.” He’s out for the rest of the supercross season, but his hoping to be back on the bike in roughly one month.

Comment: Hill broke his toe while racing a 450 in Atlanta. He’ll be back racing in 250SX this weekend.

Comment: Hoeft underwent surgery after breaking both feet in San Diego. He’s out for Indy.

Comment: Martin sprained his wrist in San Diego. He and the team hoped he’d be ready to race in Indy, but he’s going to miss it.

Comment: In Atlanta, McAdoo reinjured a fractured hand sustained at Arlington. The team wants him to take the necessary time to heal properly—he’s out for Indy.

Comment: Oldenburg missed San Diego after a hard crash in Oakland. He should be back for Seattle.

Comment: Taft suffered a concussion while moonlighting in the 450SX Class last week in St. Louis. His team says he’ll be back for Seattle.

Comment: Wharton was originally scheduled to return to racing for the start of the 250SX East Region, but his comeback was delayed by a practice crash. He’s now contesting the West Region and will make his season debut this weekend in Indy.