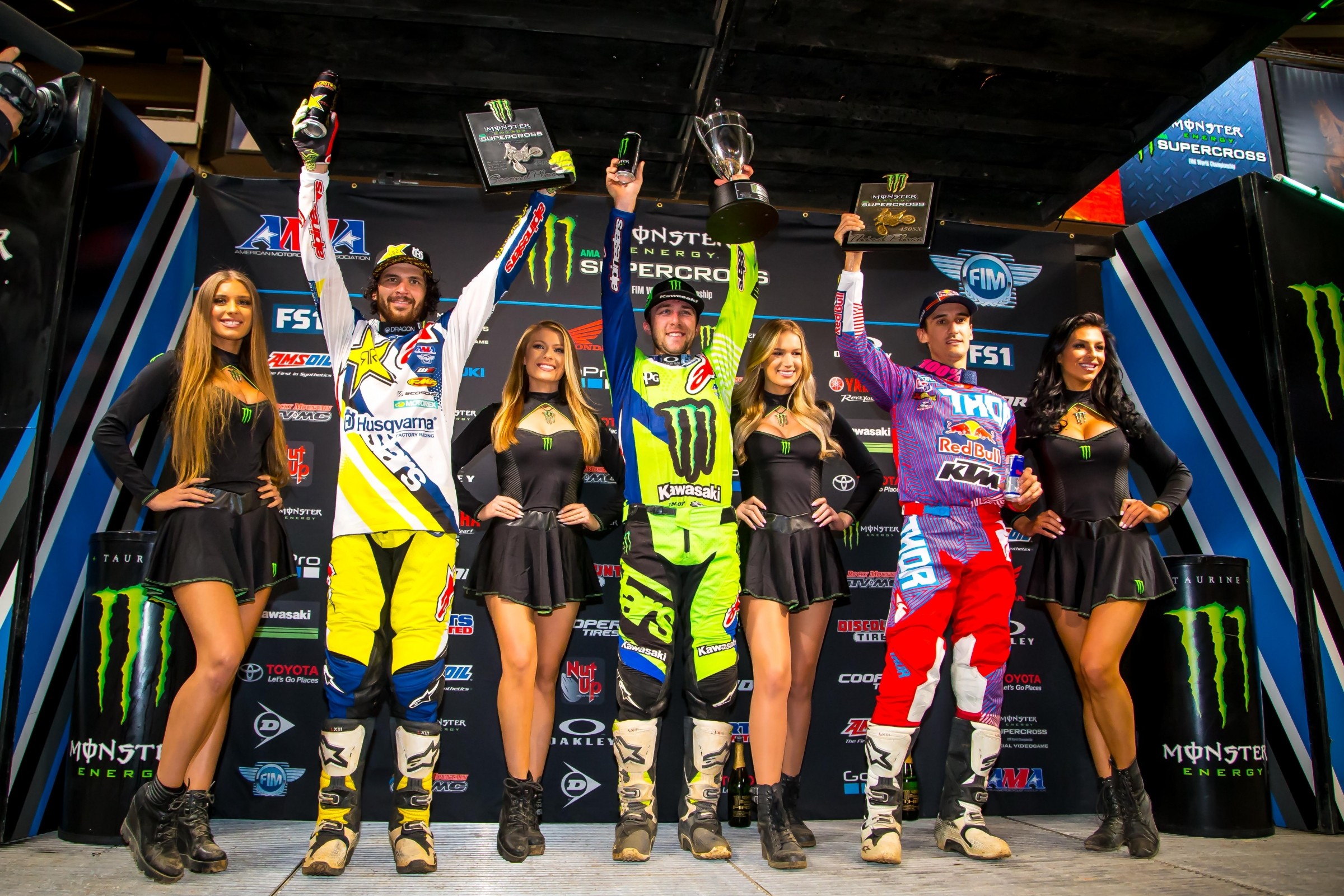 Racer X: Marvin, earlier today in qualifying, the track seemed pretty packed and you guys were all pretty aggressive. At night, it seemed a little looser, loamier. Can you kind of take us through that transition and if that was something that you kind of noticed being out there, if you actually felt that on the bike?
Marvin Musquin: Well, St. Louis always has that really good dirt, that orange dirt. It’s awesome. The track guys, they did a great job getting the track fixed a couple times. It was definitely a good day. I enjoyed it a lot riding on that dirt. The track was definitely tough during the main. The whoops were really chewed out and we were able to jump through it. The rest was pretty rutted and some kickers out there. It’s good to be safe after a main like that and a track like that. I’m glad I’m here and third on the podium.

Jason, congratulations. I know you’re managing a championship right now, but you also have personal goals and races you want to win. How hard is that management when you’re behind Eli in the early laps and you’re wanting to win, but you’re also having to kind of maintain something?
Jason Anderson: For sure, I really want to win some races before the season’s over. I don’t want it in my head to manage it at all. Tonight, I started out second right behind Eli and he had some of those sections, like that triple in the back and stuff like that that he was nailing every lap. He was nailing that quad and turn and three over. I honestly just didn’t have it in me. I felt like if I kept trying to do some of those lines, that it could bite me. This is one of those times to where sometimes you have to swallow your pride a little bit. But at the same time, Eli was just savage. He was crushing us. Hopefully come back next weekend and battle for that win again.

Eli, congratulations. In the heat race you kind of made some moves early, and then got a little stuck there in third and didn’t really seem to find your rhythm fully, but in the main event it was something completely different. Was that just the result of being out front, having that clear track early? Or were there some things maybe you found in between the heat and the main?
Eli Tomac: I didn’t change anything. It was just starting out front. It’s amazing what clean air can do sometimes. It felt like that’s kind of where I should have been all day. We brought it to the main. It was a fun track. The dirt is, I think, the best on the circuit. Had a good time on my dirt bike tonight.

Eli, I want to congratulate you on your 18th career win and also Kawasaki’s 150th win in supercross. That’s courtesy of Ben Bridges. I want to ask you to talk about that clean air. Before the starting line drops, do you say in your mind, if I get the holeshot, I’m going to pull the trigger and I’m doing that quad into that corner, because that’s where you gapped Jason right away. You had a big lead already if you did that.
Tomac: Yeah. You try to do your best to visualize that. That just comes with confidence and just how kind of the day goes. You want to go in there with a level head, but at the same time, you want to visualize yourself going in there first. I just was feeling it. I knew if you did get those combos, you could make a little break like that. It ended up happening.

Eli, it looked like you even added in some little sections. That triple coming back where you met up with the first turn. Adding things in the main event.
Tomac: Yeah, I did it once or twice in the heat, but I had a nice little rut for the main. It was just a little triple, but it ended up being pretty fun, and it was a good spot to make up some time. It was a good one to get.

It seemed like this track was one of the better tracks. Had a lot of options through the rhythm sections. Does that make a night of racing better for you? Do you like that when there’s that many more options and it just keeps you more motivated?
Tomac: Yeah, there’s places to make up time and it makes the track technical. I was doing the triple maybe the first half of the race, but then went away from it just because the rut gets blown out. You can only do it for so long. It is good when you have those there to do. When you can pull those, it’s good.

Anderson: The track tonight was tacky. It’s the best dirt on the circuit, but the way it was built this weekend, I feel like the sizing was off a little bit. A lot of the jumps were either big or even the quad or whatever, I went to go table, single. Even in the first lap of the main event and I cased the crap out of the table single part. It was just odd. The track was awesome, but it broke down. It was probably one of the most broke down tracks we’ve ridden all year.

This is your 11th straight week of racing. I know a lot of guys get to this point in the year where we’re still a little bit away from a break and they’re ready for some time off to regroup or recover. For you three, you’re kind of in the swing of things right now. How do you feel as we start winding the season down?
Anderson: Racing 11 weekends in a row is pretty gnarly. I think that’s the hardest part about the 450 class. I think that’s why like us three, we’re on the podium quite a bit, and I think that’s the hardest thing to do is be solid every weekend. So for me, I’m just trying to keep it light. I still want to be the same guy every weekend, and that’s a tough thing to do. It’s my fourth year in the 450 class and it hasn’t came easy. I’ve been at this point in the year sometimes where I just do not want to ride my dirt bike. But at the same time, I feel like we live and we learn and we just keep our heads down more and more from year to year and just try and get better and try and achieve our goals.

Musquin: Definitely racing every single weekend is tough, but we’re used to it now. For my third year on the 450, I know what to expect. We have a good program and we actually always have a good time during the week with the boys in Florida, and I think that helps. Obviously, not every day it’s great. You have tough days, but I feel like we try to enjoy it as much as we can. Obviously, on the weekend when you’re on the podium or something like that, it helps you keep on going. We give our best every time. We get to do that for a living. At the end of the day, racing the championship is pretty amazing. It’s a great championship. Just one weekend off, but we’re used to it and we just race every weekend.

Tomac: I think we should just race every week and then just give our weekend off before outdoors, then we get another weekend.

Anderson: I agree with that.

Tomac: What’s one weekend off at week 13? Just go all the way.

Marvin and Jason, you guys both came in this year on a brand-new bike. I know that there was a lot of development in that thing from the midway part of last year to now. Are you still learning a lot about that thing now, or is everything figured out and you just have a baseline setting you come in each week with?
Anderson: For me, I feel like I’m always trying to be better, but sometimes I feel like with the new bike and everything, you don’t know how it is from track to track. But at the same time, I feel like our bike, with the way it is, the new bike is pretty solid all around that you can’t really be too wrong on a lot of things. There’s a couple weekends, like Daytona last weekend, I don’t feel like I made the best decisions. But I had a good base setting and I just went back to that this weekend. I felt a little bit better but still got smoked, so I need to keep working.

Musquin: To be honest, we keep trying things every time. The team has been working hard, and the guys at WP, too. They have ideas every time. I like to try and see how it feels. Every weekend, the tracks are different. Sometimes it’s really hard pack and this weekend it was really tacky, so it makes a difference on the feel of the bike. It’s been some days where I was struggling, but I’ve been doing better at the main. We always make the right decision for the main. So, it’s been good.