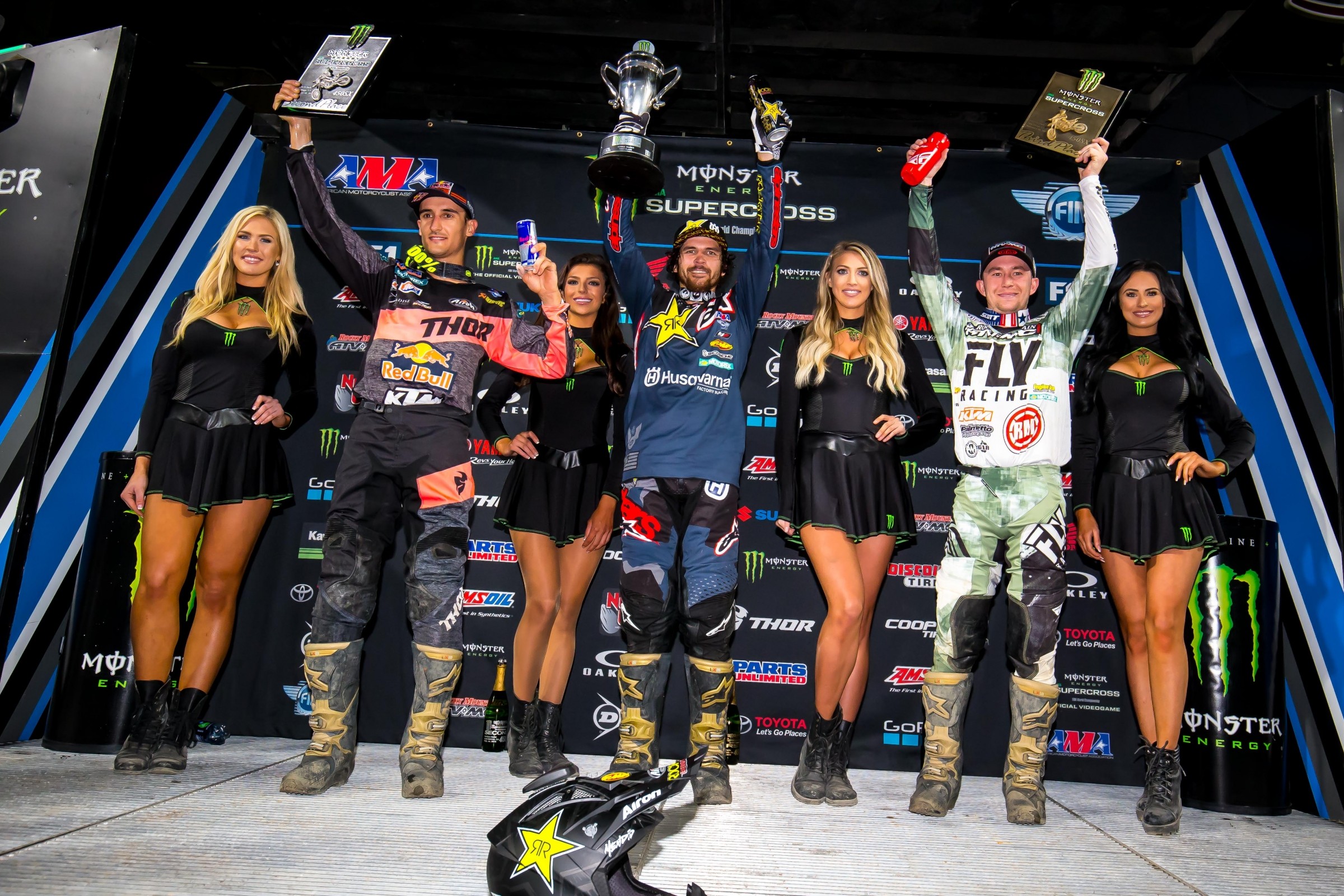 Racer X: Blake, congratulations on back-to-back podiums. Walk us through the battles you guys had there in the middle of the race. It seemed like everyone was going back and forth. Just kind of walk us through that.
Blake Baggett: I couldn’t even remember, man. There was chaos going on out there. The track was gnarly in a different way than last week. Last weekend was super rutted and really technical. You had to kind of be on your toes. This weekend it was super moist and slick and you were always getting wheel spin, so you were on your toes with that. So, two super technical tracks that you had to be on your A-game. Things were happening everywhere. It was kind of carnage for a while.

Marvin, congratulations. In the first half of the main, you looked a little tight. Made a couple mistakes and then it seemed like halfway through everything just clicked and you seemed like a different rider. Was it something in the race? Was it something with just your own comfort? There was definitely something about it halfway through.
Marvin Musquin: Yeah, that’s right. First of all, the start was great. I was pretty far outside. All the gates were really rough after the gate, but I made it happen. That was the key tonight, to get a good start. Definitely those guys were faster than me at the beginning, but I tried not to panic and tried to be consistent, get better. I’m really happy because all day I was a little bit off, especially in the heat race. To get a second place tonight compared to what I did in the heat race is huge. We made a big change going into the main and I’m happy about that. I wanted to make that change. It comes from me, so that’s good. It feels good to get a second place. Like you said, second half of the race I was really consistent. Blake was behind me, like, halfway in the main. I just wanted to be consistent and stay in front of him.

Jason, congratulations on the win. It seems like late in the main event there the pack was kind of moving up towards you, and then all of a sudden same thing - snap, you kind of turned it around and opened that gap back up. Are you getting maybe a little bored up there? It seemed like you got a little complacent there mid to late main event.
Jason Anderson: On the far side there was three table single before the triple. I think it was Mookie that crashed right there. I kept kind of hacking that section a little bit. These guys were riding good and they came up on me. I was just trying to ride consistent. The track this weekend compared to last weekend, like Blake said, it was super slick. It was hard to get traction. It was rutted, but kind of like sketchy ruts whenever you hit some of the jumps. All in all, I feel like that start was kind of crazy next to me. I feel like Marvin came in and then it bunched up. Lucky to kind of make it out of the carnage.

Jason and Marvin, there was a controversial pass last weekend. Given that you guys train together, did you guys talk about that at all? What are you feelings on that pass? What is your current relationship like right now?
Anderson: I think we’re just competitive, and it comes out on the track. Sometimes we get a little too far ahead of ourselves. In Oakland, it was honestly my bad. I just was trying to go forward. Obviously it’s not good between us. At the same time, I want to be battling with Marv. I don’t want to take him down, but I just get ahead of myself and heat of the moment. It’s hard to put it into words.

Musquin: I was in a good position in Oakland and obviously I didn’t expect it. I didn’t hear at all Jason. I was going off the turn and I couldn’t do anything. For sure, when you’re in a good position in a main like that running third and you go down, it’s a bummer. My thoughts, we’re both racing. I feel like at the end of the whoops tonight, I could have sent Jason over the berm, but I didn’t. It’s not really my style. One day if I have to, I will. Definitely the situation is not the same, but we’re fighting for the championship. That’s the way it is. It’s not a big deal.

Anderson: Basically, he owes me one.

Aldon Baker had said you’re still training together in the gym. You’re still working out together after that this week?
Anderson: Aldon wasn’t in California this week. Usually we kind of do our own things whenever Aldon’s not there. We do our own gym program and stuff like that, because Marv lives in Corona and I live in San Diego, so not this week. But once we get back to Florida, I’m sure we’ll be…hanging out a little bit [laughs].

Musquin: I ask Aldon to have two separate gyms. No, I’m joking.

Jason, the whoops, you seemed to have a couple of scary moments in the later stages of the moto, as well as on the triple going down the third-base line. That seemed to have a weird kicker that was sending everyone left and right. Can you elaborate on either one of those areas of the track?
Anderson: Yeah. I felt pretty good most of the track, but the whoops, I changed up my line maybe four times in that moto trying to find a nice line. I just ended up going down the middle after a couple of the moments I had and it wasn’t that bad. Then that triple, I cased it, I think, two times. Other than that, I felt like I was ripping my corners pretty good and everything. The whoops were one thing, but that little triple, I kind of mis-judged it a couple times. The whole track was funky.

Jason, you’ve got a big points lead now. Does it get tempting to let that affect the way that you race out there? Are you more hesitant to maybe send it in spots? Or does it not affect anything? And if it doesn’t, how do you keep it out of your mind?
Anderson: Obviously, you think about the championship. Anyone who says they don’t, it would kind of be impressive. I’m just going to keep trying my best because that’s what I’ve been doing. I feel like I’ve been putting myself in good positions. Just going to try and keep a level head through it all. I feel like my riding and stuff like that has been good. My starts have been so-so, but I’ve been making it work.

Blake, what was it about the track out there that made it so many block-passes? I think there were more block passes tonight than I can remember seeing in one night.
Baggett: That would be a question for Dirt Wurx, not me. I didn’t build it. I just ride it. It’s just tough. The bikes and everybody is so competitive and so equal. There’s twelve guys within a second in practice, and it’s not that wide out there when you kind of get down there and you’re riding. It’s not like NASCAR, where you can stay in a lane and it’s got lines for you. You go wherever you want and sometimes you run into people. Just things happen, so it’s tough.

Blake, you ended up having a pretty incident-free main event, capitalizing on a couple of fades from a couple of the other athletes as well as just some battles that were happening in front of you, and you were able to move up on. What did you learn about the guys ahead of you when you were kind of chasing them down?
Baggett: I was just giving it my best shot. Some guys maybe got tired or made mistakes or stuff like that. Honestly, when I saw these two up there, I was hoping that a little training partner action would take place and I would capitalize on it. We’re going back to Florida so maybe it’ll happen soon, and I’ll be there to pick up on it.