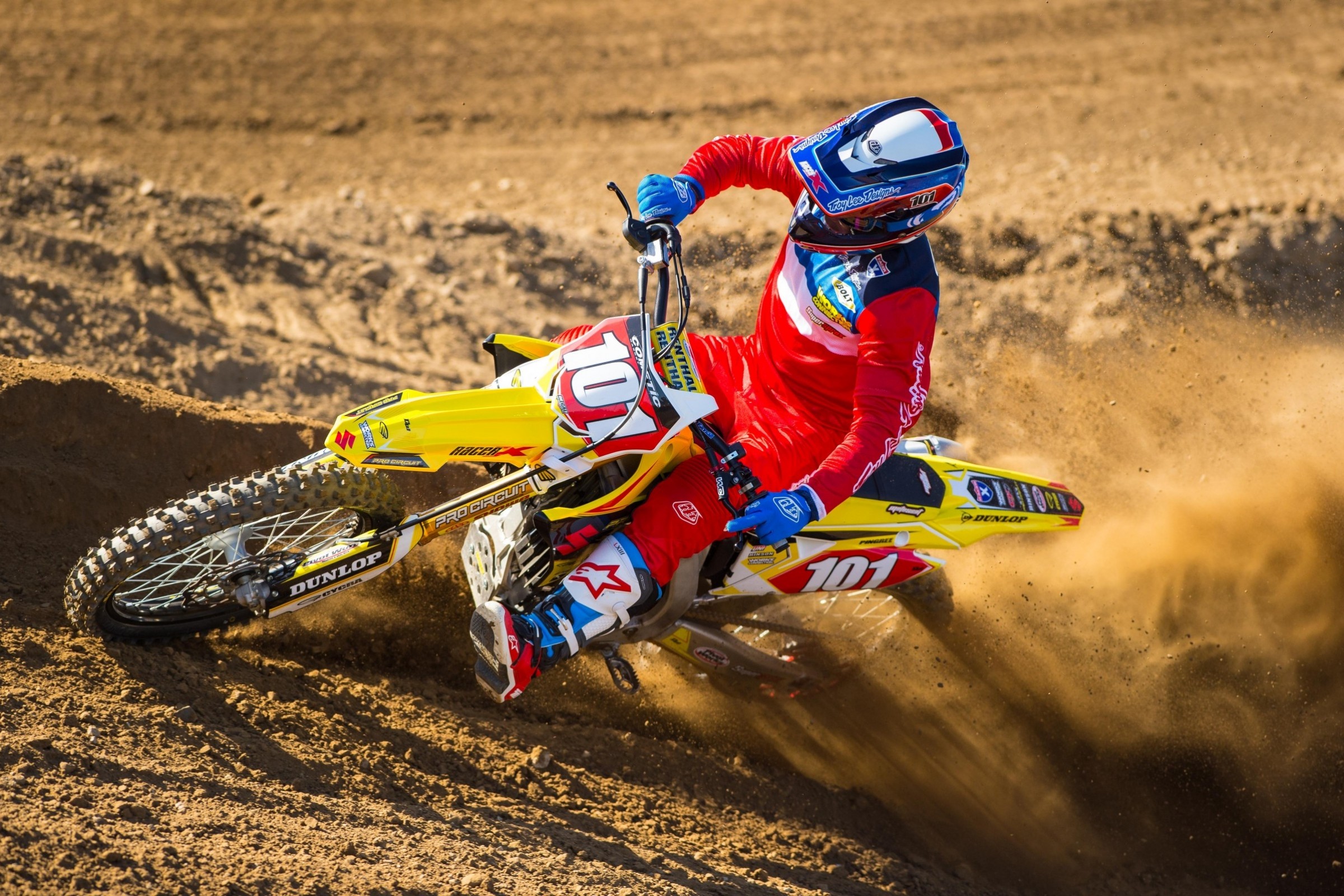 We keep hearing insiders and riders talking about the whoops and how they are separating the field during a race. Glendale had supposedly awesome whoops with appropriate entry speed while Anaheim 2’s were almost non-existent and entered into at the speed of light. The front runners want them big, gnarly, and long (scratch that for Marvin). Also, the rest of the track is sometimes easy and allows all riders, including the second- and third-tier riders, to hang it all out. Some say that makes for closer racing, others say it does not, but it makes for more risk-taking as top riders try to make something happen to separate themselves from the pack.

My question is, who makes the call in the end? Is it up to the track builders and how they feel early in the week? Or is Feld calling the shots? What are the politics? In the end there are plenty of ex-pro riders involved at any level of the sport and present at each event, indoor or outdoor. Why do we find such different extremes even though by now, everyone should know what a good track looks like? There should be at least 20 good and successful designs for baseball and football stadiums on file after all these years… Why reinvent the wheel? Bring back good tracks from years past and mix them up in succession.

So, who calls the shots and when? Are those decisions made every week, or long before the first gate drop of the season?

It’s a good question and one that I think could be changing. In recent years, the Dirt Wurx crew designed the tracks for each and every round prior to the season. Those designs have to be cleared by the Feld folks, who are probably looking more at the safety and access aspects of the layout, not whether or not it works for racing. Besides, just because a track looks good on paper doesn’t mean it will translate to the dirt. The finishing touches are what matter: where the Tuff Blocks will get put in the corner, how big the whoops are, how steep the jump faces are, etc. That isn’t determined until they build it, and I don’t know who makes that call.

I will tell you that the whoops at A2 were massive when they first built them, but when timed practice rolled around, I could have gone out there without any preparation and skimmed those whoops on my daughter’s electric Barbie bike. Tracks need to be slowed down, made more technical, include more 180-degree turns, and have bigger whoops immediately out of corners. Slower speeds and more technical obstacles will bring better racing and fewer injuries. It’s science… you can’t argue with it.

I was watching one of your Garage In Stock videos and wanted to comment on the great lip spinach you have there. Also, knowing your new vocation and the risks involved riding a MX/SX track, do you grill the attending medics on their qualifications? Or do you just pin it and hope that the flat-billed, black sock-wearing bro holding the yellow flag is paying attention? Knowing how mind-numbingly boring it is to stand in one place with your head on a swivel for a day, I must wonder about the quality of the flagging personnel. But I assume the medics are good to go.

I don’t check on the medics, but I should. Because I interact with our local ambulance companies on a regular basis, I know firsthand there are huge differences from one medic to another. You could get a career transport medic who is totally dialed, or you could get some kid fresh out of paramedic school who is going to spin in circles if he is faced with a legit call. Unfortunately, every medic has to start somewhere… you just don’t want one of them working on you. The good news is that the 911 system is pretty efficient, at least here in SoCal, so the firefighter/paramedic from the closest engine company will be on scene in short order and your chances of having a qualified paramedic go up significantly.

Flaggers are almost as inconsistent. I’ve experienced some great flaggers who know exactly what they’re doing, and I’ve nearly been killed because the flagger had his head so far up his ass he could lick his nostrils clean. Thanks for taking some pride in what you do.

I enjoyed the “How to Build a Factory Bike” video Racer X posted. For those of us weekend warriors who enjoy tinkering in the garage almost as much as riding, the immaculate factory shops with endless new shiny parts are a sight to behold. My question is, how much technical work on the bike does the modern-day mechanic actually do? Seems like there is a specialty technician for almost everything, including suspension, engine, tires, data acquisition/mapping, etc. Is the technology to the point that one man simply can’t be an expert on the entire bike? Compared to the mythical image in my head of Skip Norfolk laying some magic voodoo on the King’s CR, the current mechanics seem like glorified parts-changers. Please advise.

Times have changed, amigo, and these days being a mechanic means something different. Mechanics of yesteryear were a one-man race team. They had to drive the box van around the country from race to race, do the shopping for food and drinks, build the bike from the ground up each week, and act as babysitter/psychiatrist/friend/parent to their rider. Now the mechanics fly in, install the engine that has been rebuilt by the engine technician, drop wheels off at Dunlop so the tires can get changed, make sure the graphics are looking good on the new plastic and bolt those on. Add fuel and Google how to spell “breathe” correctly and you’re a factory mechanic.

Alright, I’m being asshole here, but teams have tried to raise the level of professionalism by having dedicated engine guys, suspension/chassis guys, etc. Current mechanics still break down and rebuild practice bikes with frightening regularity, and while they do fly home from the races, that just means they go back in the shop to do more work. The job isn’t necessarily easier, it’s just different. The one common denominator is the black crud under their fingernails that looks like they’ve been scraping coal out of mines all day. Dead giveaway.