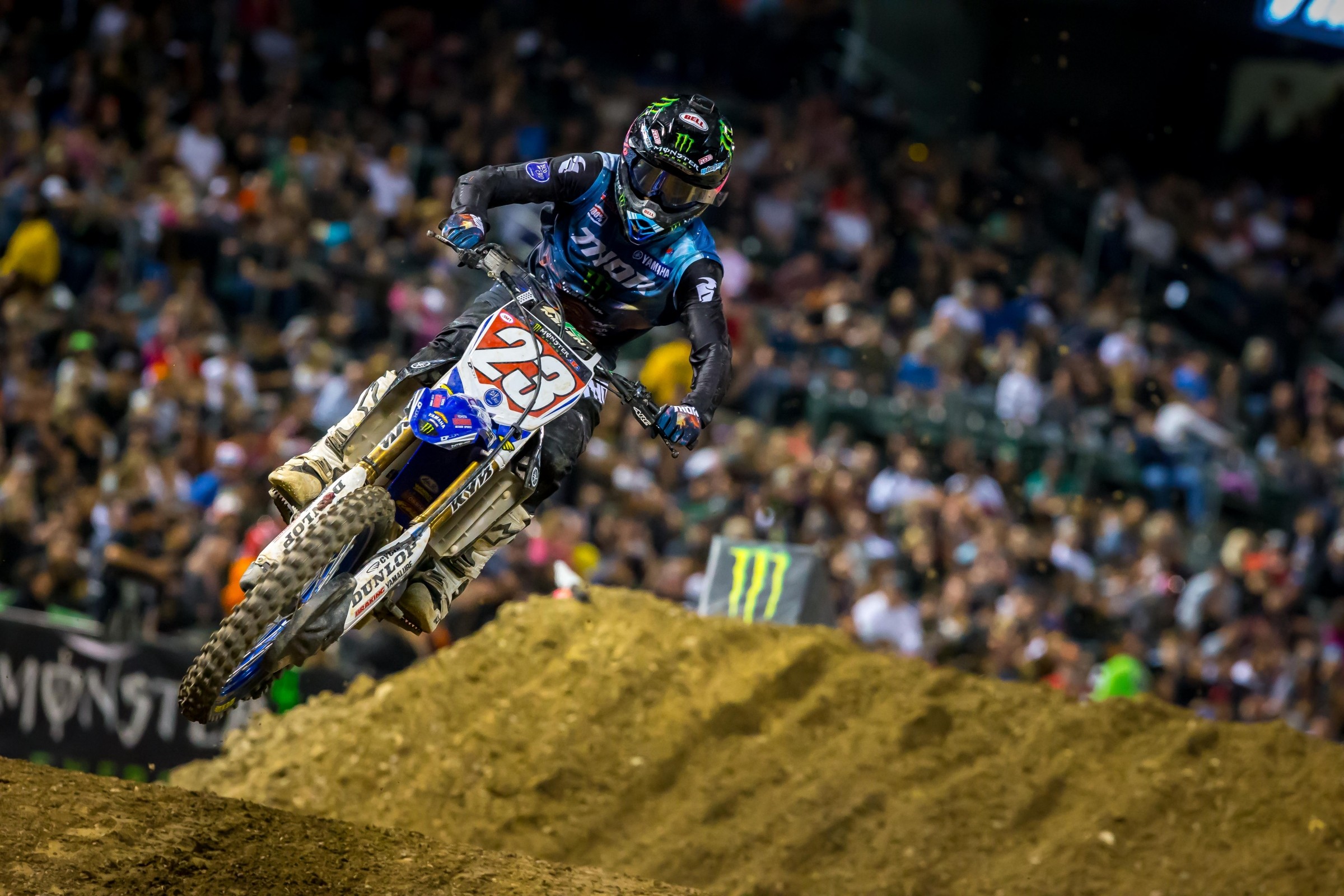 With three wins and a runner-up finish during the first five rounds of the 2018 AMA 250SX West Region championship, one can certainly ascertain that Aaron Plessinger is on a roll. And as of the last week, he also has one hell of chest cold. After winning the last two races in 250SX West, the Monster Energy/Yamalube/Star Racing Yamaha competitor looks to be the man to beat—at least for now—in the great title fight to take control of the West Region championship. Plessinger was so sick after his Oakland win that he didn’t even attend the post-race press conference.

Since then, Plessinger has been in SoCal, laying low and throwing down the Day- and NyQuil before heading south into downtown San Diego for Saturday’s Monster Energy Supercross Series round at Petco Park. Sounding tired and a bit off the gas, Plessinger was nonetheless in good spirits and enthused to speak about his recent racing form.

Do you have the flu? A cold?
I think it was trying to be the flu, but I wouldn’t let it! I was keeping it as contained as I could. I think that it was just a real bad chest cold. I was fine last Wednesday, but on Thursday, I don’t know what came over me. My body was real weak and I thought I actually had the flu. It was not good that day. I stayed in bed and tried to drink some fluids and take it easy. On Friday it subsided a little bit, but then it turned into this cold that I have now. After Friday, that cold stuck with me on Saturday and once I got out on the track, after that first practice, I knew it was going to be tough because my chest was burning so bad. Right after practice, I was like, “Wow, this is going to be a long day.” It was a tough one, for sure, and I was just trying to conserve energy and take it easy. It was a good plan, I would say. I saved it up for the heat race and the main. That’s what I did and it turned out all right.

It took you precisely 16:46.844 to reach the finish line and win the 19-lap main event. All things considered, how did you feel throughout the race?
[Sneezes] I think I got off to a sixth-place start and I had to work my way up, but I knew ahead of me that I was going to be able to get most of the guys. Christian [Craig] and Alex Martin were riding really good. It was a tough track, for sure. All of the ruts were developing so quickly and the track was changing every lap. But I ended up making the passes on all of the guys coming up, except for Craig. He made it pretty easy on me to get around him (Note: Craig led for 11 laps before flying off the track and hitting a Tuff Bock.) It was just consistency that I was worried about. I knew once I got in the lead, I could keep it. I just had to be smart and hit my marks and land in the ruts and not beside them.

Ruts and soft dirt—that’s the stuff you cut your teeth on during the GNCC era of your amateur career.
Yeah, it was my kind of track, for sure. I actually thought it wasn’t going to rut up as gnarly as it did, but I was loving it.

You’ve won three 250SX West Region main events now. That’s a real good run. How did the Oakland win, in your opinion, shape up against the other two victories you earned?
I think Oakland was a confidence-booster. Not to say that my confidence isn’t already up or anything, but winning that race while being as sick as I was is just a statement to myself that I can do it every weekend now. It’s still going to be really, really hard, but I think I’m going to make it easier on myself knowing that I can do it. That makes things a little bit easier now.

Petco Park this Saturday will mark the sixth round of the 250SX West Region season. You guys are already more than halfway through. Deep down, did you think things would be going this well for you?
Yeah, we’re halfway through now, so, shoot, it’s going just as planned for me. I would have liked to have done a little bit better at A2, but my starts weren’t the greatest. I did what I could. It’s cool when it’s going as planned. I’m really happy with the way I’m riding and what’s going on. I’ve got an eight-point lead going into this weekend and I feel a little bit better now. Yeah, I’m going to go into this weekend full-force and try to extend my win streak. Right now I’m going to stay kind of low-key and not do anything too strenuous and just save my energy up for Saturday. I think if I do that, this weekend will end up a lot like last weekend.

Physically, you don’t sound very good, but as far as racing and lining up in San Diego, you sound real positive. Thoughts?
For sure. It’s hard for me to get a little upbeat right now, but I’m as confident as I’ll ever be. I’m excited for the weekend. I’m really pumped for the gate drop. I’ll be ready when Saturday night comes. It’s going to be a good night. The guys I’ve been racing against are riding awesome. It’s definitely tough with them. Shane (McElrath), Joey (Savatgy), Christian Craig are riding really well and Justin Hill is stepping it up now. I think there are probably ten or so people right now that if they get a good start, they could do some damage. Shane and Joey are the top contenders and they’re riding outstanding, and they’re not going to make it easy on me. Adam Cianciarulo, too. He is riding outstanding. It’s just his starts that are holding him back. If he gets up there, he’s not going to make it easy for me, either. These guys have been outstanding, and this year has been really hard. It’s on me to be in as good of shape that I’ve been in and to be as good as I have been riding. It’s hasn’t been too crazy up in the top spot. We’ve traded the red plate between us three or four times now. It’s such a crazy season, but I think with Phoenix and Oakland, I kind of made a little gap for myself. I think I can hold it to the end if I keep my head on straight.