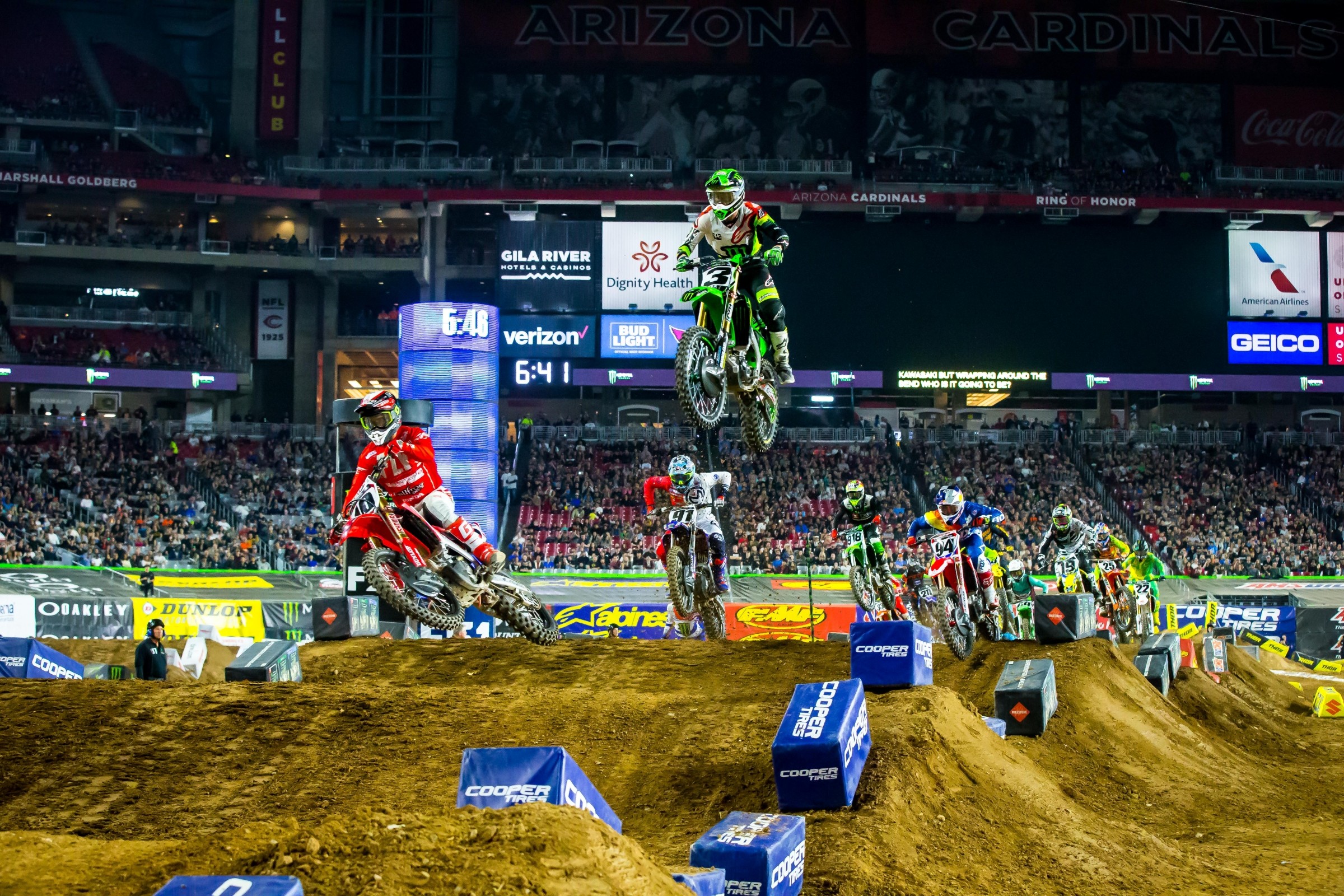 Breakdown Now That Was a Racetrack!

Now that was a racetrack! After a very disappointing Anaheim 2, Glendale brought the goods in every way. It had several key aspects that can make the difference in a good track and a bad one. I don’t really understand why or how tracks can vary that much from week to week, but I know the difference when I see it. Was Anaheim 2 intentionally watered down? Maybe, although that would be impossible to prove without confirmation. Regardless of the why, this track is what we should be striving for each weekend.

The start was incredibly long and safe. I didn’t see one pileup all night. There were a couple of guys that tangled, but nothing more than a tip-over. With a start that long, one could surmise that we would see spectacular crashes, right? Not so fast. The length builds speed, yes, but it also gives riders a chance to spread out and room to maneuver before the first turn. Nothing causes first-turn crashes like a short start straight. They create a bottleneck simply because riders haven’t had time to distance themselves from one another. Longer starts equal less chaos. Strange but true.

The rhythm sections were creative, difficult, and plentiful. The section after the start had two different options that led to passing in the following turn all night long. The three-two versus two-three was difficult to execute, but that was a prime place to jump inside and block-pass before the triple. The long rhythm section before the whoops had several different options varying from extremely difficult to simply doubling through the entire section. For riders like Eli Tomac, Weston Peick, Ken Roczen, Justin Barcia, etc., they were able to jump over the first tabletop, then triple over the next tabletop followed by a triple-triple into the turn. It was lethal when done cleanly and all of the frontrunners were nailing it early.

As that option became tough to maintain, those riders would opt to jump on and off of the second tabletop but could still triple-double into the turn. It was slower, but still acceptable. It offered a second-best option as heart rates skyrocketed. The most common choice was to roll across the first jump on the inside, then tabletop-to-single twice before picking up the three-two into the turn. It was definitely slower than the other two options, but it gave riders just what they need more of—options.

Coming out of the next bowl berm, there was a tough whoops section that was blitz-only. Jumping wasn’t possible, and the whoops really showed who had the moxy and who didn’t. If and when riders really got a good drive and had the confidence to roll the throttle back, they could make up a lot of time. Most whoops sections simply don’t offer that level of difficulty or opportunity. In the battle between Jason Anderson and Marvin Musquin, it was the difference between fourth place and fifth place. Marvin was better on most of the track, but every time they came around that berm, Anderson would build a cushion.

In the final laps of the main event, Justin Barcia was really finding his stride and cutting into Eli Tomac’s lead via these whoops, too. He was on the far right side of the section and was able to really get aggressive. He was noticeably faster through the second half of the whoops, which is all about confidence in applying more throttle. Turning the throttle to the stops on a 450 takes a lot of confidence, and as he was desperately chasing Tomac and a potential win, that confidence was visually evident.

After back-to-back difficulties from a big rhythm section and blitzing whoops, riders were faced with another tough rhythm yet again. The fastest line was to triple out of the turn, land flat on a tabletop and then somehow eke out a triple-off over a big jump face. This option is hardly ever seen. The last time I can even remember a triple-off was Seattle in 2012, the site of Andrew Short’s only SX win. To execute it, riders had to not only jump onto the tabletop, they had to jump as close as possible to the next lip, using all of that fork compression to “pop” off of the lip and over the next two jumps. To make matters worse, even after tripling off the table, there was another triple jump waiting in the wings. It was a high-level move and one that took until the final practice for anyone to pull off and even then, not many guys consistently jumped it.

Those three lanes of the track were the three toughest of the season thus far, and more importantly, were staged back-to-back-to-back. If you’ve never raced supercross—and most of you haven’t—you might not know how hard it is to string sections like that together. The concentration is tough, sure, but the difficulty is really found in the ability to maintain maximum heart rate for that long. Most riders will subconsciously hold their breath through brutally tough sections. Almost all riders will hold their breath through whoops sections. Stringing those together means that riders didn’t really get a chance to fully breathe until they approached the finish line jump. By then, their heart rate was spiking near 200 and every effort was being made to regain steady breathing. That level of strain is really where off-season training comes into play.

It’s impossible to fake high-level fitness on a track like that. It’s simply too demanding. Even for the highest level riders, a track like that takes a toll, and it appeared that even Tomac had to back down his pace during the second half of the race. Finding a rhythm and pace is critical. Trying to sprint for 21 minutes on a track that difficult simply won’t work. The key is finding that perfect balance of elite speed, but also manageable, sustainable speed.

I am not sure how or why we can see such a difference in racetracks between Anaheim 2 and Glendale. The level of overall difficulty, the rhythm options, and the whoops were all so superior in Glendale that it’s hard to believe that it was built by the same crew. I am not sure if the Anaheim 2 track was made easier because of the injuries to Tomac, Musquin, and Wilson, or possibly because of the Triple Crown format. Both of those are believable reasons if an easier course was indeed intentionally built in Anaheim.

Moving forward, though, I will take Glendale every time. Supercross tracks should be tough. Challenge the world’s best supercrossers! Force riders to not only tax their cardiovascular abilities, but also force them to dissect rhythm lanes and put thought into their riding. Pushing them to progress every aspect of their game will not only help them, but it will also be a lot of fun to watch each Saturday.