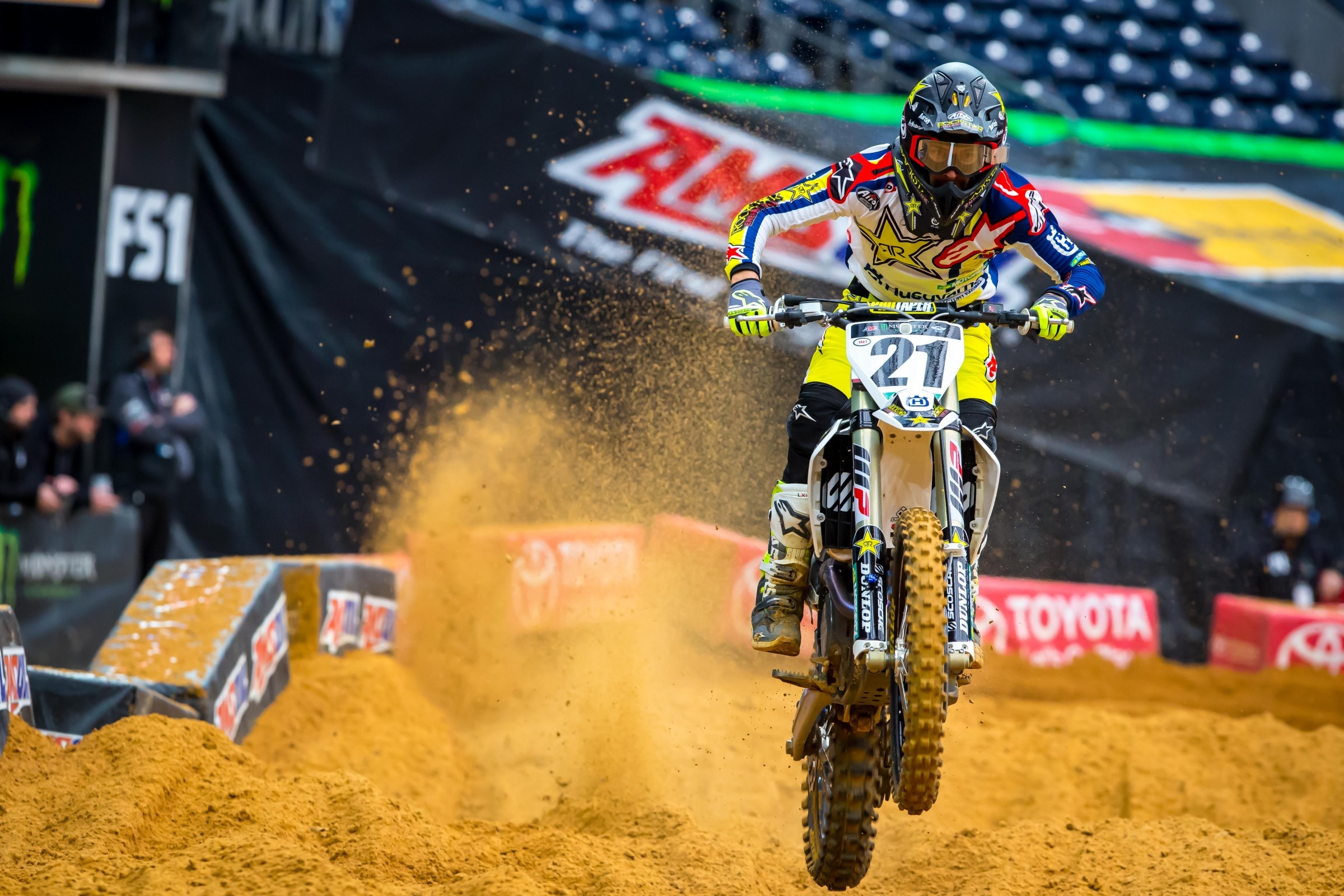 Round two is in the books and it gave us a major shake-up in the 450SX championship and a new points leader in the 250 class. The riders had to a battle a tricky track in Houston that even the great Ryan Dungey said seemed simple during the track walk, but because of the soft dirt, developed into a course that caught several riders off guard.

Because of a get-off in the whoops that resulted in a hurt shoulder, Marvin Musquin missed the night show and opened up the door for Jason Anderson to snag the lead in the 450SX championship by seven points over Ken Roczen and Justin Barcia. In the 250 class, Aaron Plessinger capitalized on his love for rough tracks by coming from behind to take the win over Joey Savatgy. He now leads the 250SX West Region championship by four points.

When Roczen passed Barcia for the lead on the second lap, it looked like it was going to be his time to shine, as there was some separation between him and the day's fastest qualifier, Jason Anderson. Anderson took some time to get around Barcia and into second place, but once he did, he laid down three heaters to get close to Roczen and eventually into the lead. Check out their laps below.

Roczen's laps were actually fairly consistent for someone that was competing in just his second race back from injury. He didn't show any major fade when compared to Anderson, as their graphs follow roughly the same trend with one or two outliers. And this was on a track that was rough and had several jumps that launched the riders to flat.

Roczen commented on the jumps to flat in the press conference after the race.

"It’s kind of crazy actually. When we were sitting on the starting gate there, it actually looked like they were doing quite a bit of track work, but by the time we hit halfway and especially towards the last laps, it gets pretty brutal. Especially with dirt like that, you could actually see where we landed—there were tire marks and holes and everything. It really changed. We normally don’t ever have jumps where we just kind of launch out of there, but they really kind of steepened the transitions a little bit. Obviously, the dirt being so soft, it sometimes can get a bit rutty, especially a couple of holes down there. So, you have to really be aware of it. But like Jason said before, once you find your line, it’s really hard to get out of that. Then you send it off of something and the track, like they said, changes every single lap, and you might hit one that is not so good. It could cost you big-time."

When the gate dropped for the main event in the 250SX class and Shane McElrath, Joey Savatgy, and Adam Cianciarulo jumped out to the front, most probably  got ready for a three-way fight for the lead. Aaron Plessinger, who was in tenth place after the first lap, definitely wasn't in the picture for a win.

But Plessinger eventually stormed to the front and was in second place by lap 10. It took him three laps to get around Savatgy and then he was gone. Take a look at Plessinger's distance to Savatgy over the course of the race.

Now take a look at their lap times. They follow the same basic trends, but Plessinger is about a half of a second faster on each lap for most of the race. We'll see if Plessinger can keep this same speed dominance going when the series heads back to Anaheim next weekend and we get to see the new race format in action.

Also, here's one cool tidbit I found when looking over Savatgy and Plessinger's lap times. On the opening three laps, Savatgy's lap times here all on the same one-hundredth of a second. For all the things that can happen over the duration of a lap, it's pretty cool to see how consistent the top riders can be. Savatgy was definitely locked in to start the race.