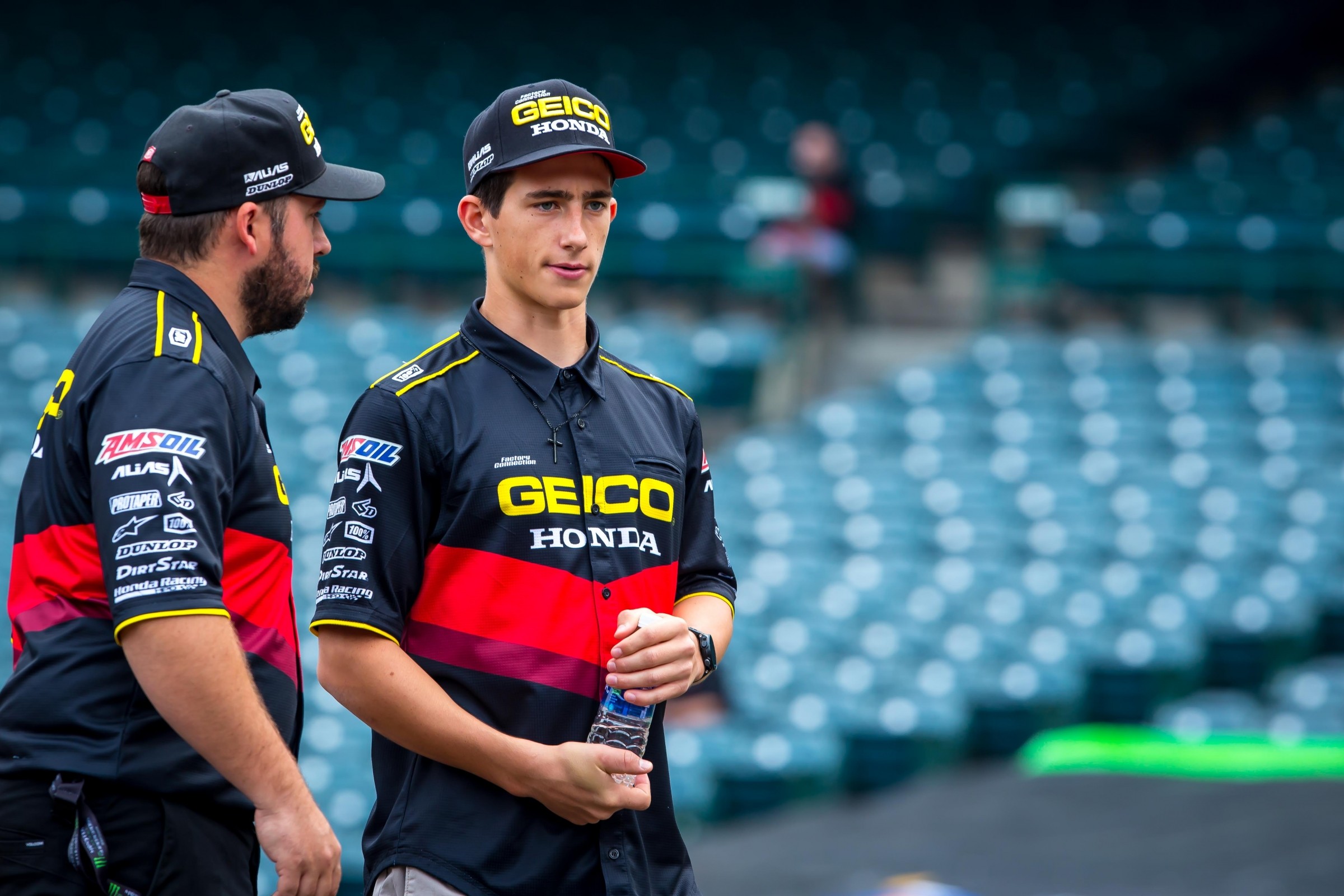 Not sure what was crazier: how bad Christian Craig’s ankle looked in an Instagram post, or the fact that, in that same post, he said he still planned on racing on Saturday night in Houston. True to his word, he lined up and even rode well, taking fifth place.

After the race, he explained the injury. “Stupid mistake on my part,” Craig said. “I over-jumped a triple and then just landed weird and my ankle folded. I actually thought I dislocated it right away because it went numb. All of a sudden, I was like, ‘I don’t want to pull my boot off. This is not going to look good.’ Luckily, it was a sprain. Sometimes sprains are worse than breaks. It swelled up right away. I went to Dr. G twice a day every day from then on out and just did whatever I could and showed up. My foot fit in the boot and the rest is history.”

Houston, we have a problem. Landed on my ankle weird yesterday, didn’t even crash but ended up with a sprain. Lucky it’s not worse. Don’t worry- we are still going racing just might have a pimp limp Could try to hide it from you guys but nahhh. Thanks to @teamdrg for all the help!

In the race, Craig found himself battling with his young teammate Chase Sexton. Sexton and Craig are super-buds. Actually, their relationship is more big brother/little brother, or even father/son or teacher/student. Craig, 26, has been through the ups and downs of this sport, from breaking his neck, to retirement, to eventually coming back and even winning a 250SX race. Sexton, meanwhile, is just 18 and now has only two supercross races under his belt. Of course, he was supposed to race supercross last year, but injuries prevented him from ever lining up. That made the Houston race just his second supercross ever, and he reached the podium.

“To be honest, I kind of expected to be pretty good this season,” Sexton said post-race. “From last year, I crashed in Atlanta and it was tough, but this off-season for me was really good. I felt really good coming into the season. Like I said, last weekend wasn’t what I was hoping for, so I went back to work this week. I’m just happy to get on the podium. It happened a little faster than I thought, but I’m happy I got it out of the way now.”

The Houston track was tricky and led to mistakes from several contenders. Sexton, although a rookie, was actually one of the steadiest, and he took advantage of a late crash by Adam Cianciarulo to sneak into third. Meanwhile, Craig laments one mistake that cost him.

“It [ankle] felt fine, and then the main my foot slipped out third lap and it hit the ground. That one kind of spooked me,” he said. “That kind of made me tense up a little bit, but I’m not going to blame my ride on my ankle. I finished fifth and I had a podium position right in front of me. I was stuck with those guys all race and I’m pretty frustrated of how I finished. At least the ankle injury is out of the way. It’s just going to get better, so I don’t need to worry about it anymore.”

After spending plenty of time riding and training together, Sexton heads to Florida this week, so he and Craig will now part ways. The real question is: is Craig happy to see his little buddy grab a podium so quickly, or is he bummed that he made it as his expense?

“A little bit of both. I gave him a slap on the helmet like ‘good job,’ but I was really slapping him on the helmet because I was pissed,” Craig said with a laugh. “I can say that, though. He’s like a little brother to me. For him to do that already, I was surprised. I was pumped for him. He passed me straight up and he was riding good all day. Just makes me want to bring it better next weekend. We’ll see. He’s going to Florida. I’ve got to pull out some tricks in California and make it happen next weekend.”