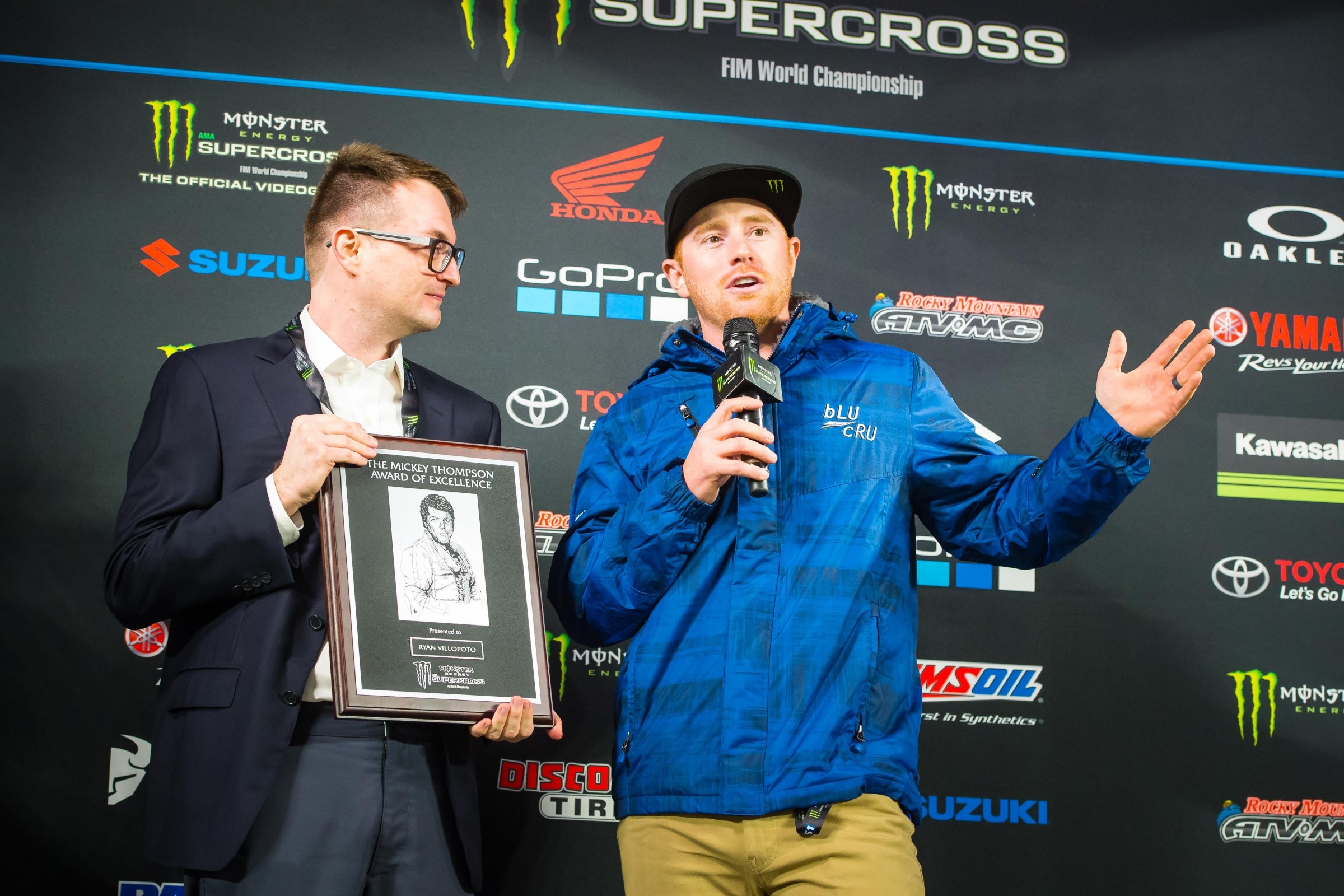 Where Are They Now Ryan Villopoto

UFO Plast was founded in 1977 in Tuscany-Italy and immediately became part of the social imaginary as a true icon of the off-road world. The UFO Plast plastic parts, accessories, caps, helmets and clothing for Motocross, Enduro and many other sports, are recognized and appreciated thanks to their durability, in line with the best Italian tradition. Checks on every production process and every single material allow the company to achieve high quality standards, and offer sportsmen the satisfaction of always choosing the best, in the "Made in UFO Plast" style. A style born to carry out a very specific mission on this planet: "Being by the side of anyone who wants to -seriously- explore their passions.”

Maybe the biggest shocker of Anaheim 1 took place hours before the race even started. At 9 a.m. Saturday morning, Yamaha held a press conference announcing a new tie-up with Ryan Villopoto, a rider who spent his entire professional career with Kawasaki. That’s a strange tie-up, but Yamaha was adamant that they’re not calling RV a “brand ambassador” and that his role will focus more on actually using various Yamaha products—from riding dirt bikes to flat track and even side-by-sides.

In the announcement, held at the Monster Energy/Knich Factory Yamaha team truck, general manager of motorcycle operations for Yamaha’s motorsports group Mike Doughty said, “Ryan will collaborate on numerous motorsports activities, with the purpose of promoting all aspects of motorcycling and motorsports throughout the U.S.”

Ryan commented, “With my transition to life after racing, I’m still passionate about motorsports. Whether I’m racing, riding recreationally or teaching my kids to ride, I still have a lot I want to give back to the motorsports industry from many aspects. My family and I enjoy all sorts of motorsports activities, and Yamaha has the broadest and most diverse lineup around. Whether it’s off-road, on-road, two wheels or four, they have it covered. That’s why I’m so excited to enter into this collaboration with Yamaha.”

Consider RV a user more than an ambassador. We talked to Ryan about this on Saturday, and the conversation drifted from Yamaha to life under the microscope as a racer.

Racer X: When I first saw you race, you were on a Yamaha, but that was a long, long time ago.
Ryan Villopoto: You want to see what’s in my backpack? Check this out—Mike Guerra still had the resume my mom made when I was a little guy. On the Yamaha. Even have Answer gear!

Wow! That’s crazy. So, clearly, Yamaha made a huge mistake. Should have never let you go. I guess they’ve been trying to get you back ever since. They waited 15 years to try to get you back.
[Laughs] Hey, better late than never, right? We’re back! I rode Yamahas for four or five years or so. Mike [Guerra] was the amateur guy I would deal with back then, and he’s still here.

Your role here—you’re not just here to shake hands and talk to guys like me. Going to be some cool things to do on motorcycles?
Yeah, some cool stuff on the motorcycle. Sturgis was mentioned; they have a Super Hooligan flat track race out there. Stuff I enjoy and would be a lot of fun.

You seem to have a thing for flat track right now?
I enjoy it, yeah.

Well… you would always steer with the rear when you were racing.
That’s what everyone always says, yeah.

I love how you’re never actually buying it. You never buy into steer with the rear.
I just get on the gas early! [Laughs] And the tire is spinning.

What else do you have with this deal?
Two-wheels, four-wheels. By four-wheels I mean side-by-sides. Pretty much anything I can get my hands on, I’ll go and ride, right? So, I think the biggest thing that makes me excited is the side-by-sides. I could call up Greaves [famous short course off-road racing family] and they have those things pretty dialed-in back East.

Maybe do some racing?
Yeah, maybe do some side-by-side racing. I’ve done the truck thing and I’ve had a lot of fun with it, so I think the side-by-sides would be cool. He’s [Greaves] has always said, “Yeah, come out and race one,” and I’ve always said, “Yeah, well, how am I going to do that? We have two colors here, green and blue, you know?” So now it’s blue and blue, so it will be fine.

Are you involved with the team at all?
Right now, no. We’re at Anaheim 1 and we just made the announcement, it’s really only been a few days that we even knew about this. If I could go do anything to help Cooper [Webb] or Justin [Barcia], I’m right here and I’ll help. But if they don’t want that, that’s cool too. I can sit and watch and enjoy it. Directly with the race team—no, I’m not working for the race team. I can help if they need it, though.

Sounds like this is really early stages.
It might morph into something different. I basically got the call two or three days ago: “Hey, your contract might be done.” So I was like, “Oh, okay.” Still kind of figuring it all out. I’m sure there’s more to come. I’m going to ride the bike for the first time on Monday. Haven’t even ridden one yet.

What about two-strokes?
Yeah. That’s something I’m really excited about. We don’t race them anymore, but if I want to jump on a 125 or a 250, they’re badass, and it’s cool. Something that was dying and now it’s coming back, cool bike builds and all that. It’s pretty rad.

At Straight Rhythm, we all know that the two-stroke class stole the show. There were two things that everyone kept talking about after the race. First was Ronnie Mac, obviously. The second was, in all of your interviews, you were smiling a lot. I heard so many people talking about this. They were like, “Look at how happy Villopoto is right now!”
I mean, that’s a fun race. It’s just for fun. How many guys were smiling at that press conference here? None. Right? So it’s not just me; it’s everyone at this level. This is a serious sport and everyone is out here to go for the jugular. It is what it is. It’s a serious deal and you have to take it seriously. Straight Rhythm was rad because I was able to just show up and ride, talk a little shit back and forth with Ronnie Mac and Chad [Reed], and just have fun. Honestly, I think that was what made the event—the two-stroke class. That’s what crashed Red Bull TV. Everyone knew Marvin was going to win the Open Class unless he made a huge mistake.

[Laughs] Well, yeah, that sucks, maybe the smile will soon go away. Anyway, now that you don’t have to deal with stuff like doing these press conferences anymore, all of the pressure that goes with racing, you’re a happy guy.
It’s not necessarily doing the press conferences or doing the work, or just the pressure. It’s just all of it together. You’re paid to win. But you’re also going here and then you’re going there for obligations, and then this guy wants an interview and this guy needs something else. So then it’s not just one interview, it’s two, then everyone wants one.

I think the story could be told better for the athlete. The ones telling the story, maybe Feld, somebody, we need to explain better that this is serious stuff. Maybe we could do a better job explaining it ourselves, but it’s tough—you get run around and pulled in so many directions. And our job is to win. Our job is to win races, first. A good business person, as my grandfather would say, would be able to do both.

Yeah, but that’s really difficult.
It’s so difficult. So much in this sport is on us, the athlete. It’s not like NASCAR, where if you have a fifth-placed car, there’s not much more you can do. Or if it’s a team sport, maybe you play really well, but winning or losing isn’t just on you. This sport, this is us. If I didn’t have the best bike, I can make do with it and potentially win the race.

So if you lose, it’s on you, too.
Realistically, if you took me in my prime, or anyone in his prime—Eli [Tomac] right now, if he went into Pro Circuit and said, “Mitch, give me what a privateer could get,” we could make it in the top ten. We might not win, because maybe we can’t get that triple or quad out of the turn like we could on a works bike, but we’re going to be top ten or top five. So, a big part is on our shoulders. Tell me another sport that’s like that.

It’s true that most of the time, we don’t talk about bikes. We talk about athletes. We talk about what rider is riding well or looks good. It’s mostly about the athlete, all the talk in this sport.
Right. It’s 80/20. Different than most racing.

Okay, next topic. Every year, after that Anaheim press conference, the fans say, “Why doesn’t anyone talk crap up there?” Can you explain why? You won four titles in a row but never talked trash on anyone up there. Seems to me like everyone is just trying to avoid extra pressure and drama at this race. How nerve-wracking is this race, as it is?
This one is the worst one. The hype and the drama and everything around Anaheim 1, it sucks—it really does. Your team has worked its ass off for months to get here, and you’ve worked your ass off to get here and be fit and be ready. Then you have one gate drop in the main event—one gate drop, one time to get it right. None of us are perfect, but you have one gate drop that the whole night relies on. If you get that bad start, that might take you from a win with a holeshot to a fifth with a bad start. A fifth at Anaheim 1 isn’t bad, but at any other race, a fifth is bad. So one little thing can change the whole night.

Another thing, this sport, it’s so isolated. Everyone is out for themselves. There are a lot of other sports that might be like that. We don’t hang out together, we don’t talk trash, it’s very isolated. You pretty much just focus on yourself and you don’t even know what the other guys are doing other than your teammate, but a lot of times that’s one fast guy and one guy who is not as fast. Besides him, you don’t know. Also, you don’t want to build up enemies right away. This is a tight, closed course. You don’t want to talk trash on someone at the press conference, and then you’ve got to look over your shoulder all the way around the track. Or you can run into lappers, and we saw what happened last year. Lappers don’t want to get out of the way because of something that happened. A lot of reasons that you just don’t want to get into that.