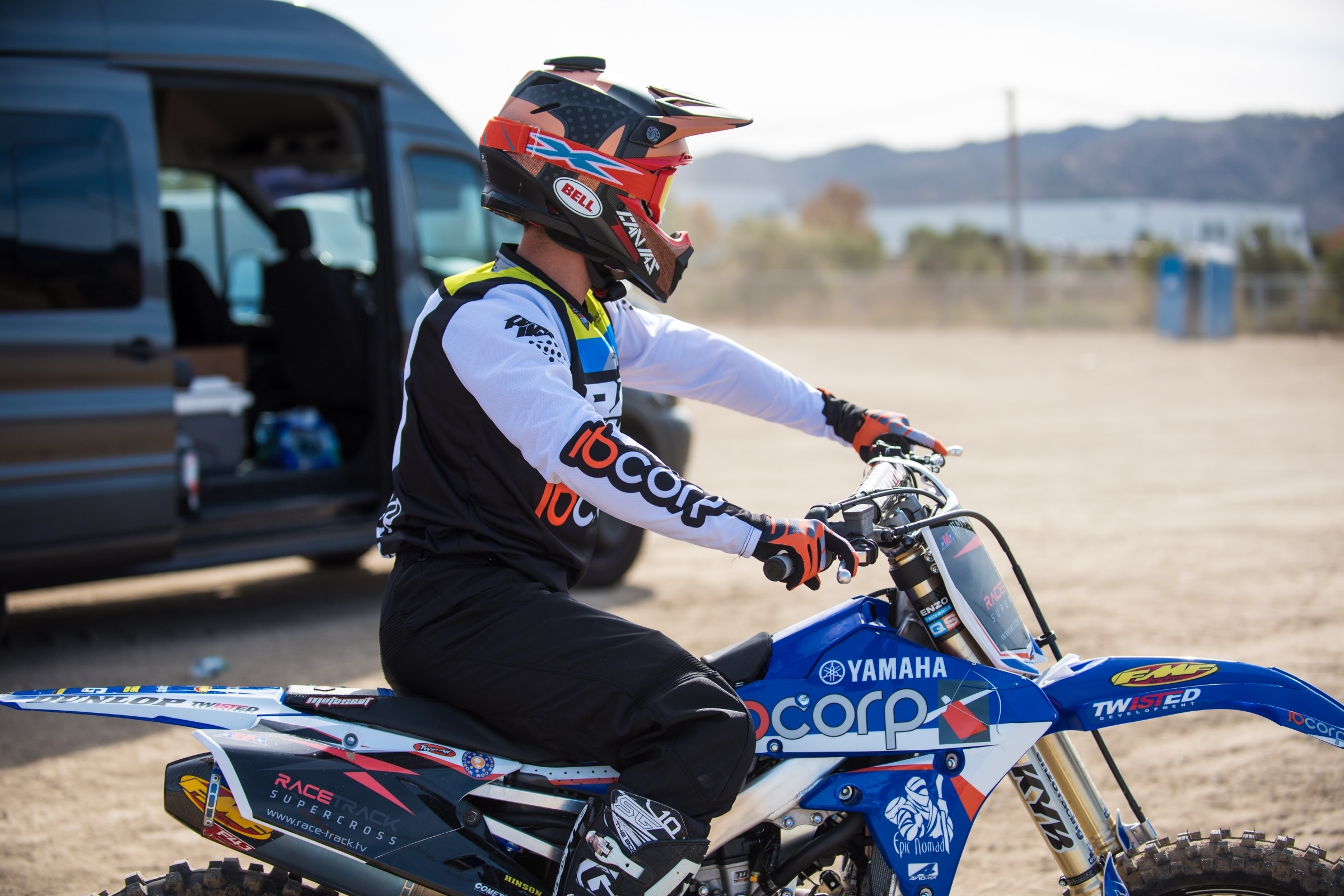 During the 2017 off-season, IB Corp Racing held a competition in Temecula, California, for a chance to earn a $100,000 sponsorship for the 2018 Monster Energy Supercross season. Veteran Michael Leib, who made his professional debut back in 2010 in the FIM Motocross World Championship in Europe and his Monster Energy Supercross debut in 2012, earned the last spot on the team, which includes Justin Hoeft and Martin Castelo.

The last few years have been tough for the California native, as he’s dealt with a serious foot injury sustained in 2015. But after winning the $100,000 sponsorship, he feels he can rejuvenate his career in 2018. We recently had the chance to talk about the competition and his thoughts on the upcoming season.

Racer X: Michael, how's it going? First of all, congrats on winning the IB Corp Racing 250SX competition.
Michael Leib: Thanks. I’m beyond excited to nail that spot down. Been on the couch for a long time recovering from a two-year foot injury and ready to get back out there with an awesome group of people behind me.

Before we get into talking about the competition itself, talk a little about your background in racing and how gnarly the past couple seasons have been for you.
[Laughs] Where to start? 2015 SX I had a big get off in practice at the Oakland round. Broke tib/fib, talus, and my navicular. Eight-month recovery on that one before I was able to get riding. Ten months till I felt I could actually get back on a supercross track. Ended up riding for Blue Buffalo that year. January 3, I shorted a triple and was pretty sure I broke the talus bone from the previous injury. Was said that it was just a scar tissue scenario and I went on the first five rounds of the year riding on what we later found out was a broken talus. From there, we had no other options then to fuse the two bones, which meant an entire mid-foot fusion—heel to toe. Was off about 14 months. In the meantime, I have been focused on building up my company—Canvas MX—and getting my body back in race shape. It has been a pretty long road, but I am ready for a new chapter in 2018.

Those are some seriously intense injuries. You're 100 percent now?
My foot is as good as it will get and I would say it is around the 90 percent range. Miles better than I had thought it would be. It was a questionable thing to do regarding my racing career. Fusing something can be a career-threatening injury, and I was not 100 percent sure I would ever make it back to racing professionally. So, to be able to get a second shot, I couldn’t be happier. I did have a crash back on the 7th of December and fractured my wrist, but I should be able to get through the first few rounds and have a strong middle/end to the 2018 West Coast series.

You mentioned your gear company, Canvas. How's that project going? I know the brand is definitely unique compared to other manufacturers.
Canvas MX has been an amazing journey for me in the short two years we have been on the market. Chuck Carothers, Matt Cordova, and myself are the three behind the scenes, and we have made some unbelievable progress in a short amount of time. We are a custom gear company. We make custom motocross gear, mountain bike gear, pit shirts, jackets, and bags. We have an online 3D designer for people to utilize and some really cool plans for 2018. It has been a great experience for me over the last two years while I have been out recovering and definitely kept me busy. I really enjoy learning and figuring out how to do something besides twisting a throttle.

It's probably kept you from going crazy during your time off. So, as I mentioned, you just won the $100,000 IB Corp Racing 250SX contest. As a privateer, how badass is that?
Yes, exactly. [Laughs] As for the IB Corp competition, couldn’t be happier. I have a large amount of respect for what these guys are trying to do and am blessed to be a part of this. It isn’t much of a secret that our sport needs some major change. I think this could be a big step forward for the industry in the years to come.

The videos do a good job of showing what a grind you all went through. What was the week like, in your experience? Tell us something maybe the cameras didn't see, or just how hard you had to push to win this thing.
The competition was a lot harder than I had expected. I didn’t think it would be easy, but the day-to-day races we did at the practice track and intensity of everything was something I hadn’t experienced since my last SX race at the 2016 Las Vegas Supercross. Lap time challenges, races, Ryan Hughes training competitions… it was kind of like motocross boot camp. [Laughs] As for something that the cameras didn’t catch, I don’t think anything has really been missed just yet. The camera crew captured every minute of every day, which was a massive workload on the crew. Living in the house in Temecula with the other competitors was definitely a different aspect to be a part of as well. Fight all day in competitions and then you all go home together. There was some awkward moments for sure.

Oh, I bet. What was it like living with the guys you're directly competing against?
As racers, we are all a bit different from one another. Was just a random group of guys living together and days three [through] five things got a little heated, so there was just some awkward silences here and there.

Given your recent struggles, how big was your personal desire to win a spot on the team?
Racing for me is everything right now. This is the shot I feel like I never really had here in the States. I had some good teams and some good success in Europe, but I have never really been a part of a team here on this side of the pond. I have always done this with my family and a pretty small budget. We did the best we could do, but this opportunity is something I knew I couldn’t pass up. In a way, I feel like this is my second chance at my childhood dream. Time is running out for me to make it happen and I have plenty of other goals off the bike to accomplish in my life, but this is right here, this is right now, and I am ready to put it together with an amazing group of people behind me.

So, there was no plan B? It was win or be done racing?
There was plan B. Although, plan B had some issues back in the beginning of November. Plan B was the same old way we have gone racing for years. Mom, Pops, and myself. We had a title sponsor this year that ended up falling through three months into our deal, and that was our main budget for the 2018 season. I was scrambling for a replacement sponsor at the time of the contest and had some great things in the works with Eterra USA and Skid Steer Solutions, but everything was still getting put together. We would have made some West Coast rounds, but not the full season.

Now that the competition is finished, has the team dynamic changed at all? Maybe from feeling like a competition, to business as usual?
The dynamics of the team have been solid from day one. Justin Hoeft and Martin Castelo [the two other members of the team] I have known for a few years now. The team in general are also close friends of mine as well, so it really felt like family from day one.

How would you rate the overall experience—working with Ryno, living in the house, etc.?
In one word? Refreshing. Like I said, our sport needs change. Things have been run the same way for so long now and it is refreshing to see someone changing the game.

With Anaheim 1 just days away, what's your biggest goal for 2018? What do you hope to accomplish this season the most?
2018 for me is all about applying my ability on race day. Listening to Ryan Hughes, working with the team, improving each weekend. My ideal goal is to crack the top five and improve from there. It is going to be a slow start with my wrist situation, but I am ready for the challenge at hand and ready to get the season on the way.