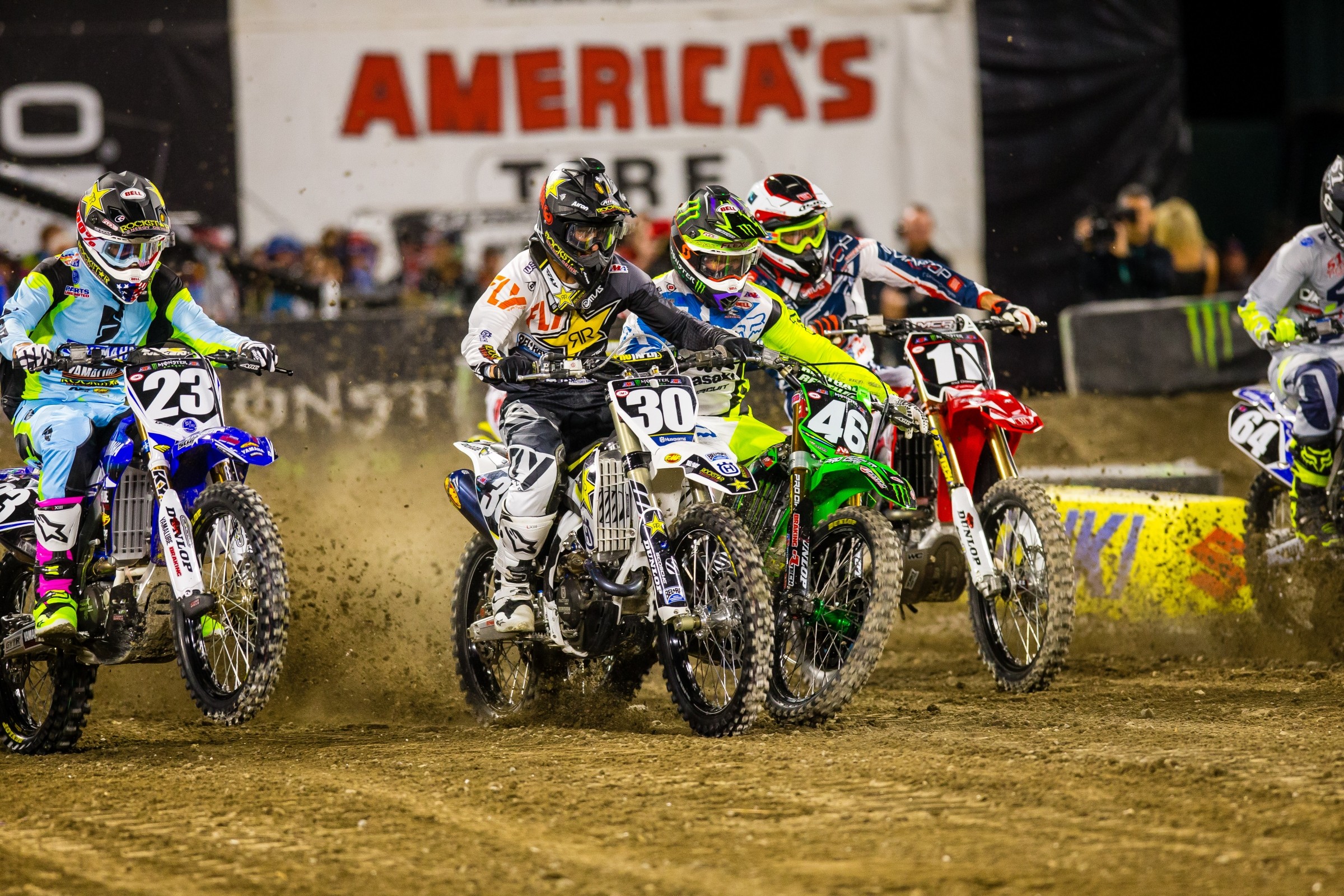 Usually, decoding which region a supercross team will dispatch its 250SX riders requires a full FBI special council investigation. However, credit due, the teams are growing more transparent with such info, and we believe that now, several weeks before the season begins, we have a pretty solid idea of which top 250SX riders will line up at Angel Stadium. This means we get to actually bench-race and hype up the 250 class in advance of Anaheim. Enjoy the press, teams—this is unprecedented!

Of course, this list is subject to change. Riders could get injured, or teams could make a switch. Nothing is set in stone, but this lineup gets us in the ballpark—specifically the one in Anaheim, California.

Who are the contenders in 250SX West Region? Let’s have a look.

The defending 250SX West Region Champion will race 250SX West again, because, as he joked with me earlier in the off-season, “all of my money is on that plate.” Yes, the number-one plate. That money now comes from Autotrader.com/Yoshimura JGR Suzuki, as Hill made a shocking team switch from the Monster Energy/Pro Circuit Kawasaki squad he won the title with in 2017. Hill was Pro Circuit’s first champion since 2011—a record-level dry spell for that team, which debuted in 1991.

Even though PC hasn’t reeled in its usual title quotient lately, it’s still one of the strongest 250 outfits in the industry. Meanwhile, JGR’s 250 team is just getting started, and Suzuki has only recently pulled factory 250 support out of the mothballs. Suzuki has won two 250 races in the last seven years. If Hill repeats as champion, it will mark a sudden turnaround for the brand’s small-bore fortunes.

He has the skills to do it, though. While his title run was overshadowed by the crazy drama of 250SX East Region (and 450SX) last year, do not forget that Hill was solid, fast, and methodical. He has a natural knack for supercross, plus he really seems to enjoy being at the races. Pressure means nothing to a rider who acts like he’s a kid getting paid to live out the dream of being a dirt bike racer. Which is accurate.

Just as Hill’s title was overshadowed by 250SX East drama, so was McElrath’s run at the crown. He won the first two races, and he and Hill were neck-and-neck for the points lead until his bike broke while leading in Arlington. Shane might have held the red plate if he had hung on to win that race. McElrath proved last year that has the stuff to get this done, so don’t be surprised if he wins again.

You already know the story: AC burst onto the pro scene in 2014, won his first supercross, and looked set for a rookie-year championship until the injuries came. He didn’t even get back to supercross until last year, and it went okay early on, but a Daytona win signaled that the puzzle pieces were coming back together. The next week, he jacked his knee in a practice incident with Zach Osborne, and it set him back a bit. Adam kept battling and did get a big Lucas Oil Pro Motocross win toward the end of ’17. If the injuries are finally behind him, he’s as much of a favorite as anyone for this title.

Craig raced 250SX West in 2016 and was great. He won a race and showed he could battle title contenders Joey Savatgy and Cooper Webb. Last year GEICO Honda dispatched him to 250SX East, though, and things didn’t work out so well. Craig is exceptionally fast in big whoops, and you see them more often in the West, as many an eastern whoop section becomes a rutted, slot-car mess. If the tracks feature hellacious whoop sections, and if Craig can get his mojo going again, look out.

As much as you know Cianciarulo’s story, you really know Davalos’ deal. He’s always fast, always a contender, and always has something happen to derail it all. In 2014, he was set for the 250SX East title until his bike broke during a mid-week ride, causing a huge crash and injury. In 2016, he was leading 250SX East points, but visa issues kept him out of the round in Toronto, Canada. Yeah, if it can happen, it will likely happen to Davalos. He will also likely win several heat races. Marty’s back on Monster Energy/Pro Circuit Kawasaki this year—he’s onto his second lap with most teams.

This just in! Monster Energy/Yamalube Star Racing Yamaha team manager Wil Hahn explained last night on the PulpMX show that Pless is in for the West.  Not a surprise because we know that Dylan Ferrandis didn’t get on a bike until recently with a wrist injury, and Colt Nichols broke his upper arm.  Aaron is as fast as anyone, and if he can solve some consistency issues—which can partially be blamed on inconsistent starts—a title run is definitely in play. Also, think about all those open stadiums in the West. If we get some mud races, GNCC-trained Plessinger's chances go up even further.

Alex doesn’t appear to be a SX contender because his last season got jacked up by Craig. A-Mart had podium speed in his first year with Troy Lee Designs/Red Bull KTM, but Craig torpedoed him over a berm in Detroit, and that was it. Alex was also headed to second in 250 Class points in Lucas Oil Pro Motocross until he broke his collarbone. He’s way under the radar, and not just because he’s really short. There’s a solution for the height, though: Alex can get up on the box.

What’s up with the TLD/Red Bull KTM guys? No one makes a more high-viz bike and gear combo than Troy Lee, yet somehow the team’s riders don’t get noticed as much as they should. Like A-Mart’s podiums and McElrath’s wins last year, Oldenburg’s 2017 was better than you might realize. He was fourth at Anaheim 1, broke his collarbone, and came back to podium at the end of the year. Maybe a team switch—he’s now with Monster Energy/Yamalube/Star Racing Yamaha, will give him some hype. Mitchell has always been fast, but has steadily been building consistency each year. Multiple podium trips, or even wins, are in play by now.

Sexton should be a total unknown in supercross because he’s not actually raced one yet—he broke his femur in Atlanta last year hours before his actual pro race debut. For a guy who hasn’t actually taken a SX gate drop, though, there’s not much mystery. Sexton has been subject to several “flying at the test track” stories and tales of his off-the-bike training have reached Stallone-in-the-80s levels. Will that translate to the race track?

Filthy doesn’t like many things, but he especially hates California. The New Yorker is as East as East gets. So, of course Autotrader.com/Yoshimura JGR Suzuki has dispatched him West for two straight years. Last year Phil had a beach house in Newport, but we still didn’t see him smile much. This year he’s living at Weston Peick’s house. Concrete for breakfast is bound to lighten his mood.

Harrison spent his first two pro seasons racing for Yamalube/Star Racing Yamaha. He was almost scary to watch as a rookie—last year he smoothed out, but wasn’t quite podium level. Now he’s with Rockstar Energy Husqvarna. Did they grab him at just the right time? (By the way, how many people see Mitchell Oldenburg on the Star Yamaha and refer to him as Mitchell Harrison? Can we get one to switch to Mitch?)