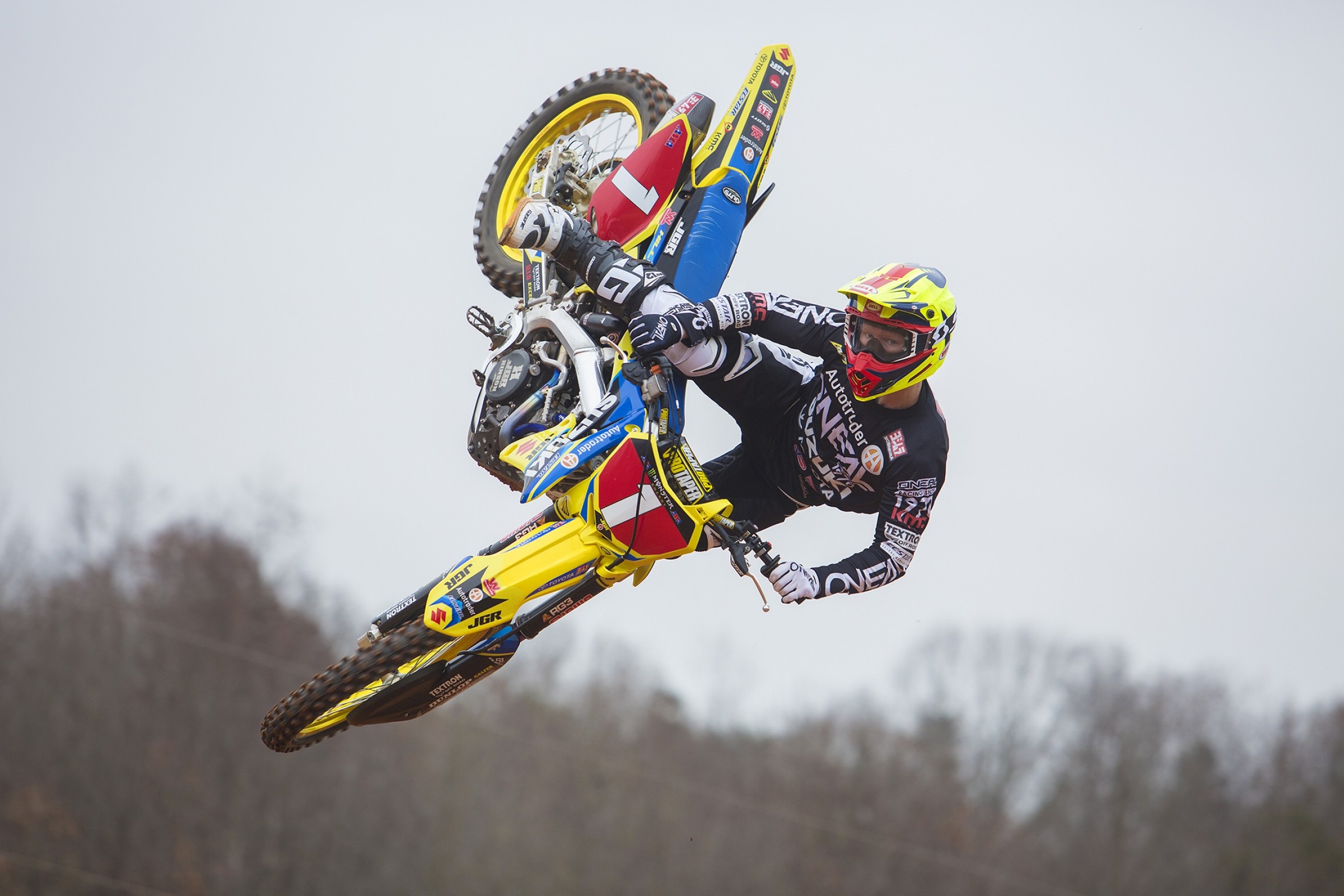 Exhaust: Flying at the Test Track

I attended Autotrader.com/Yoshimura JGR Suzuki’s team photo shoot here in North Carolina on Tuesday. The team shot pics in the morning and then let the riders loose for more testing and practice for the rest of the afternoon. It was there that I got to witness one of the time-tested off-season traditions of this sport. In full view, I saw a guy who was “flying at the test track.”

These stories are legend. We also know that the connection between flying at the test track and flying at Anaheim seems to be about 60/40. Many times, those off-season stories turn to reality in January, but there are plenty of times when they do not. Don’t ignore them, though. The big buzz two years ago was that Jason Anderson was “flying at the test track.” He won Anaheim 1.

For whatever it’s worth, Justin Hill looked good on Tuesday. Yeah, he’s a 250 guy right now and the 450s garner most of the pre-season attention, but I learned some things watching Hill go to work. He did a 20-minute moto, which equated to 22 laps. When you watch a 20-minute main event in a stadium, you get to watch 22 riders. There are crashes, battles and passes. The time goes quickly. When you’re just watching Hill churn out one lap after another, it seems like he’s out there for an hour. He was good, though. He found a new triple in one of the rhythm sections and he never stopped jumping it. The track design has not changed in two months, but Hill said only this week did he and Weston Peick get the jump dialed in. He cautioned me that this is one of the reasons to be careful about pre-season “flying at the test track” laps. After two months of riding the same track over, everyone can improve and find new things. Can they do that in 15 minutes of practice on race day?

Hill asked JGR to make this year’s track layout “busy.” The track offers virtually no place to rest—there’s a flat section similar to the start straight at a race, but because the test track doesn’t need to actually fit 22 riders, it’s narrower and feeds the riders into a tricky, slippery corner. Hill says the only real place to catch a breath is in the air on the biggest triple, but there’s a turn placed very close to the landing. Landing the triple and then braking and getting through the turn is actually the most challenging part of the track, so you go from a split second of relaxing in the air to gripping the bike with everything you have to get stopped and get through the corner.

Keep in mind that the 250SX class only races for 15-minutes plus one lap, and Hill did a 20-minute moto. He was putting in bonus time and keeping the hammer down. At the end of the moto, he admitted to me that it was a tough one, and that’s on purpose. The tight, no-rest track design is used as a training tool.

Obviously, fitness is a factor in a long race, but Hill explained to me how keeping perfect technique and avoiding mistakes is just as important. Whoops are an energy-sapper, so Hill says he really focuses on keeping his technique perfectly intact on every single lap. It could be tempting to try to really hammer the whoops and just uncork it, but once you’re just trying to hang on, you get into death-grip mode, which causes your heart rate to skyrocket. Same thing for rhythm sections—when you clip a jump, you have to hold on that much tighter to avoid a crash. That takes a ton of energy.

“Think of rock climbers. They’re not going full-grip strength on every one of those holds,” says Hill, who then grits his teeth and yells “grrrr” to further illustrate the idea of using full strength. “They’re picking their way carefully through each grab, and they’re probably only ever using 40 percent [of their] strength every time. They don’t want to blow up halfway up the mountain.”

That’s the philosophy Hill uses around the track. Don’t get into the situation when you have to go full “grrrr” and death-grip the bike. He’s especially mindful of that in whoops and tricky rhythms, the two sections that breed mistakes and the extra-effort needed to correct them.

Hill has made his bones in supercross. Like his older brother Josh, timing jumps and nailing whoops comes naturally. He exploits that advantage to its fullest. Justin says when he gets to a track with an exceptionally tough rhythm section, he knows he can go through there fairly relaxed and error-free while others might be extra tense or make more mistakes. From his perspective, the tougher the track, the greater the gap between his energy expenditure and that of another rider who is fighting his way around, lap after lap.

The busy, no-rest layout of the JGR track, combined with a long moto, forces him to hone those skills. Perfect technique, no death grip, and no mistakes for 20 minutes. Sharpening the sword. That’s what it’s all about come December.