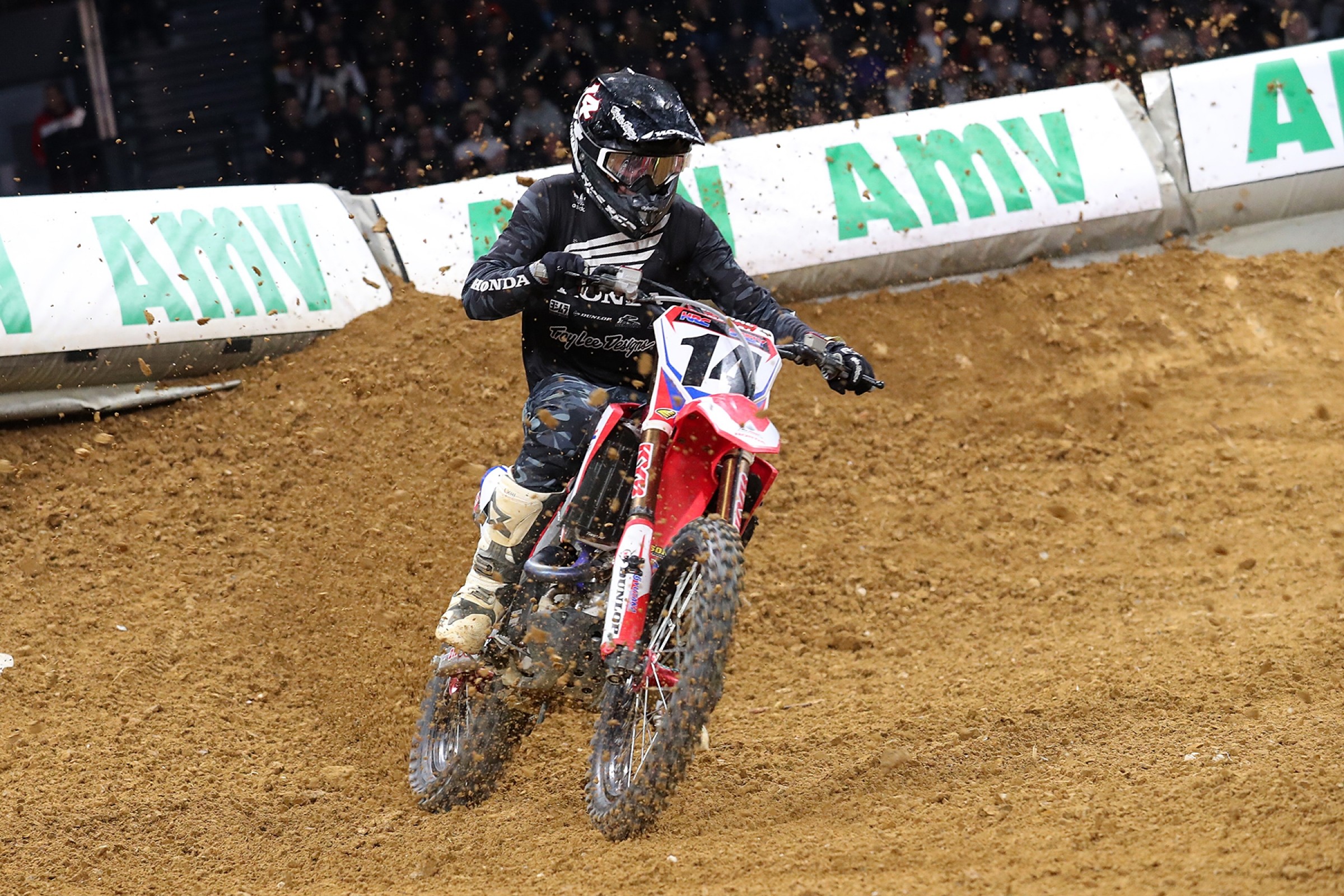 In his first race action since undergoing surgery to remove a plate and four screws from his pinky finger and right hand in early October, Honda HRC’s Cole Seely had a great weekend in France at the Paris Supercross. Seely was one of only two riders—the other was Dean Wilson—to beat Marvin Musquin over the weekend, topping the Frenchman in the second Sprint race on Sunday. Seely finished second overall (winning the tie-breaker over Wilson) behind a second-place finish in the main event on Sunday. Our Steve Matthes caught up with him after the race to talk about his weekend.

Racer X: Thank you for providing the race of the weekend in the Sprint final, and I’ve got to be honest, I thought we were going to see a replay in the final.
Cole Seely: I thought so too. I tried to set it up that way. I tried to do the same exact thing I do to him in the thing [Sprint]. But Marvin [Musquin] is a very wise, smart rider. Very in tune with what is going on in the race, and he knew it was coming. You can’t fool him twice. It is so hard to pass here; it’s so tight. That’s really my only shot. That’s all I had. Was I either gonna bonsai him and try and throw him over the berm, which this race isn’t worth it for that? I do want to win, so that’s my only shot—bonsai him through the whoops and try and get a wheel on him like I did in the heat race [Sprint], but it just didn’t work out in the main. We put on a good show, and I think the fans were happy. It was a fun race.

Your Sprint race in which you did catch and pass him, you were on it. You were the only guy all weekend to really put some pressure … you were probably three seconds down, caught him, passed him, and left him behind. Were you riding better, do you think, or was it more of a case that he stepped it up?
No, I think, yeah, it’s his home race, and he has a lot riding on this, just from a bragging standpoint. I think he stepped it up. He knew that I was coming for him. But it’s still cool, I feel like I made a statement that race. Like you said, I started third, passed him and pulled him. That’s definitely something hard to do, even if we were at home. So, yeah, it felt good. It felt like the stuff I’m doing [back home] is working.

What about the track here? Beat-down, getting hammered?
Yeah, it gets really hammered, especially with the 450s. We eat it up bad, especially the whoops. But they do a good job here. They prep the track, they steamroll the whoops here every time….

What do you think about that?
It’s pretty cool. It helps. Definitely makes it safe. It’s tough, even at home, we go out there … they do some track maintenance, but you look at some sections and you’re like ‘Man, I’m gonna have to tone it down here” or else I could have ended up crashing. It’s cool, they make it just safe enough… they don’t spend too much time with it, but they make it just safe enough where we can go out there and put it down 100 percent in those first five or six minutes of racing and then it gets pretty beat up after that. Some nasty holes. I think we were actually coming back on to the actual starting grid and we were running a little wide there. It’s such a tight little course, but we’re going all out, out there.

I was watching the gate positions over the two days and you, Marv, and Dean were all kind of switching around a little bit at different points, but dammit, no matter what, you and Dean did, that guy [Marvin] pulled the start. You gotta give him credit—his starts were good.
Yeah, for sure. He’s a good starter, always. It’s tough.

Think you could have leaned on him a little bit?
[Laughs] I don’t know, then I probably would have had to get security to get out of here. But, he’s solid. He’s crafty, too. If he doesn’t get the start, he’ll make it work in the first turn or the second turn. It’s tough, and I struggled a little bit with starts last night [Saturday], but tonight was definitely a lot better.

Overall, happy with your weekend?
Yeah, for sure. It’s always good to get a gate drop. I missed Monster Cup. Just not having that time on the bike. We’ve done some testing and it’s nice to show up at a race and confirm that. You show up at A1 kind of blind sometimes. I think this was even more relatable to supercross than Monster Cup is, because Monster Cup is so flat-out and Vegas is not really a true supercross in my book. This is a little tighter, but the rhythms were a lot like supercross; the whoops were probably harder than a normal supercross. I’m glad we got to experiment with settings here and try some stuff out.