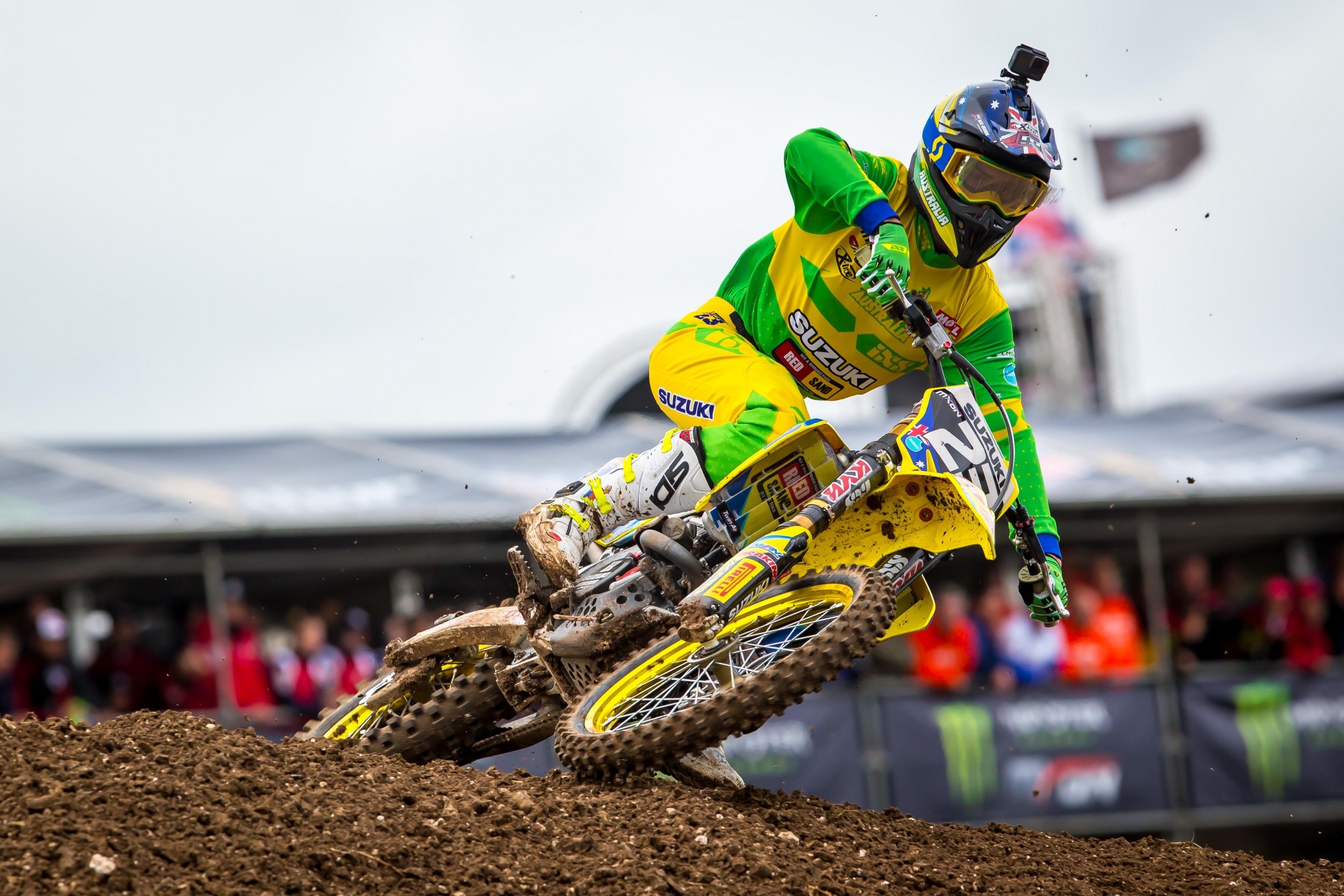 After Zach Osborne went out a crushed everyone in Saturday’s MX2 Qualifying race—taking the 37th gate pick to a start around 20th, and then marching all the way back to get the win—he became the easy favorite to win the MX2 class on Sunday. Australia’s Hunter Lawrence saw Osborne erase his more than 10-second lead on Saturday, but bounced back in Sunday’s tough conditions, battling Zacho tooth and nail in the motos and edging him for the MX2 overall. It could have been even better, though, as Lawrence had climbed all the way to third in his second moto before a crash with two laps to go left him back in eighth. “As far as I was concerned I just threw it away and was frustrated like crazy,” he said. His 4-8 was still enough to win the class.

Lawrence has been on point lately at the end of his rookie MX2 season, grabbing two podiums in the last three races and adding this MX2 win to his mantle. With Suzuki’s factory GP effort supposedly running aground, the Aussie is headed to Honda in the GPs next year, and GEICO Honda here in the U.S. starting in 2019.

Talk about his new deal will come later—for now our Steve Matthes caught up with the kid after the ‘Nations to get his take on a great day.

Racer X: We talked at Jacksonville. You opened some eyes there. You’ve been on a role for a while. Today was phenomenal. I guess for you, that crash in your second moto, you’re regretting that, but otherwise it could have been a perfect day.
Hunter Lawrence: Yeah. I wanted to kill someone after that second moto. I didn’t know about the overall or anything like that. As far as I was concerned I just threw it away and was frustrated like crazy. But I calmed down a bit. I’m feeling better now. MX2 overall and then Ricky Carmichael Charger [top rookie] award thing, so cheers to Ricky for that. I appreciate it. It’s cool. My first Nations so I was having fun and just riding my dirt bike, just doing my best.

I thought Kirk Gibbs [Australian teammate] and his first moto was really good. You guys were sitting fourth going into the last moto.
I know. That’s what I was really fuming because it could have been a 3-6 I think and then we would have been for sure on the box going into the last moto. But, it’s the Nations. Anything can happen. I’ve been saying it all week, and hearing it all week. It’s true. Anything can happen and anything does happen. But congrats to the teams on the podium. They went well. And also to my teammates. They didn’t have it easy in some races. Me also, with not a great start on the second one. I think we all done well. We all gave 100 percent. At the end of the day, you just do your best and the result is what the result is.

We saw what happened yesterday. Osborne rode a terrific race to get you. You were probably super pissed, but it feels good today to catch and pass him and take the overall, right?
For sure. I watched that last night. I was pretty pissed, but hats off to the guy. He pretty much got forced to ride outside of America in Europe. He had no offers and worked his butt off and then came back. Look at him now. What a year he’s had. I have a lot of respect for him. Super nice guy. It was awesome to race with him. In the quali race it was a bit of more mental I think that let me down. It’s hard not to think when someone like that’s behind you. It’s always in your head. You’re like, what if you beat him? The media—blah, blah, blah. It’s difficult, but it was cool racing with him. Really cool.

The last month and a half you’ve been on fire. Really opened some eyes. What’s changed? What’s going on. What’s been different? Is it all just sort of mental?
Yes and no. Like halfway through the season I started to come good. I got my first podium in Germany. Then the next weekend was a four-four, just missed the podium. It was getting better and better. That’s when it was starting to ramp up. Then I had a back injury. My T5 and T6 were compressed, so I was five weeks off the bike and that threw a big spanner in the works. Then from there we just started again pretty much, not completely but we had a bit of a stagnant start again. So yeah, it was just coming better and better. We just didn’t change anything. We just kept doing what I do. It seems to be all right now.

What’s next for you? Do you get some time off now?
Yeah, for sure. I go back home to Australia and see my mates and family and friends. I haven’t seen since I left Australia, so that’s going to be awesome. Happy to not be injured so I can do what I want on my holidays. Being injured on your holidays sucks. So yeah, it’s cool.

MX2 overall Motocross des Nations winner. It sounds pretty good.
Yeah, I’m pumped. I didn’t realize at first, but even when they told me, I was still so angry at myself, it didn’t put any happy emotion into me. But it’s pretty cool.