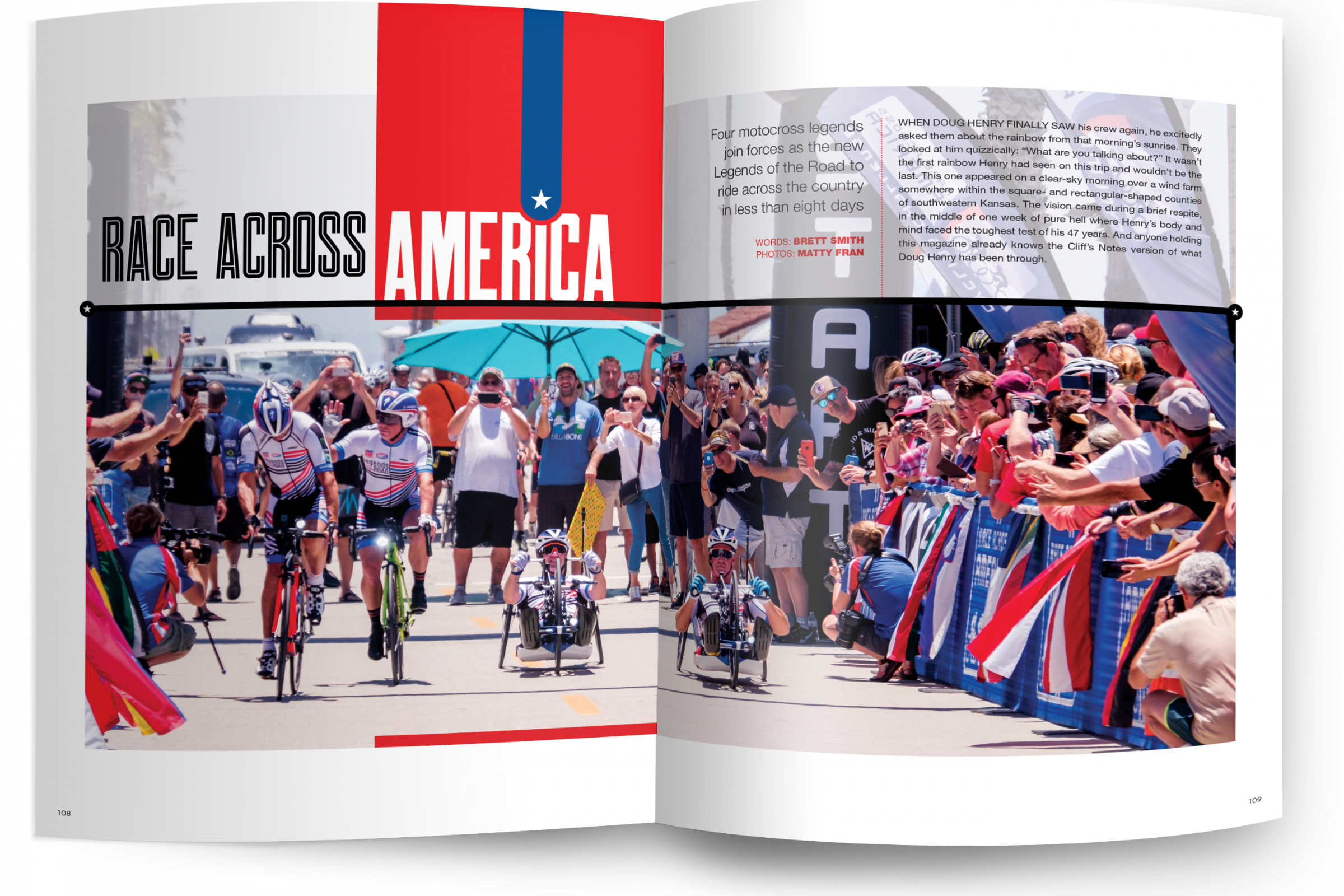 In the Mag, Race Across America

Brett Smith's "“Race Across America” ran in the November issue of Racer X Illustrated. Subscribe today to read this full feature and for more in-depth stories about Loretta Lynn's, a talk with Jeff Ward about the Motocross des Nations, the Baja Beach Bash, a breakout day at Budds Creek for a number of riders, and more.

In the small hours of June 20, 2014, I woke up and checked my phone. The Legends of the Road bicycle team was in the final stretch, hurtling toward the Annapolis, Maryland, finish line of the Race Across America (RAAM). I hastily drove through the darkness just in time to watch Dave Mirra, Ben Bostrom, Micky Dymond, and Dave Zabriskie arrive side by side at 3:19 a.m. They had traveled non-stop from Oceanside, California, to finish in less than five and a half days, winning the four-man team division and nearly setting a record. I filed this story for ESPN and was happy to count RAAM in my bucket list of two-wheeled events covered.

In the months following that story I spoke with my friend David Bailey, whom I’ve known since I was an intern at a production company nearly two decades ago. He told me about watching the first RAAM race on ABC’s Wide World of Sports in 1982 when only four riders total competed in the event. It was one of those things that was in the back of his mind (just like competing at the Ironman) but at the time he was still working on winning motocross and supercross races. It was that 2014 Legends of the Road team, however, that reenergized Bailey—now in his mid-50s—to get his own squad together and tackle the world’s toughest bicycle race. On December 21, 2016, I got this text message from David:

Gotta raise the dough, we're all in”

I told Bailey I’d try to get them as much pre-event coverage as possible. The moto industry wasn’t a problem at all; writers and photographers were all over it with interviews, etc. I wanted to get them exposure outside of moto. I have a decent sized client list outside of motorcycle publications and I thought this cross-over story would be a good fit for any popular bicycling magazine or web page. Here was my pitch:

Can a foursome of recreational cyclists, in their late 40s and 50s—anchored by two paraplegics—win the 3,000-mile Race Across America? Judging by their collected achievements, the “Legends of the Road" should dominate the world’s most grueling bicycle race. Funded by the Road 2 Recovery Foundation, the ultimate goal is to field a mixed ability team every year and show that athletes who have career ending injuries can continue to achieve and compete.

David Bailey, Doug Henry, Jeff Ward and Micky Dymond are all former professional motocross champions (three are in the AMA Motorcycle Hall of Fame) who found success elsewhere after ‘retirement’. Bailey’s motocross career was cut short in 1987 but in 2000 he won the Ironman at Kona; Ward won Indy Car races; Henry has earned four X Games medals in SnoCross Adaptive and Dymond was a member of the 2014 Legends of the Road RAAM team that featured Dave Zabriskie and Dave Mirra. In 2017, he’s reviving the “Legends” team.

I tried Bicycling magazine, Outsideonline.com, ESPN.com, and even Velo News, which is deep in covering bicycle racing. All the editors were quick to communicate but all turned it down. Outside said it was “too Inside Baseball-y.” It was an interesting lesson into the perception of our sport. Outsiders really don’t get it, even in the year 2017.

Alas, I felt like I had broken a promise to an old friend but one vow I wasn’t breaking was being present at the finish line. I was going to be there whether it was at noon on a Sunday or 1 a.m. on a Wednesday and no matter if I was reporting or spectating.

When that day came (and it really was noon on a Sunday!) it was a special thing to watch David Bailey, Micky Dymond, Jeff Ward, and Doug Henry roll across the line together. The four men are on the second and third chapters of their lives, each earning “legend” status more than once.

I hope you’re able to pick up the November 2017 issue of Racer X Illustrated and read “Race Across America,” which details the journey of the Legends of the Road team and discusses the plan for the future of spreading the word of mobility for disabled athletes.