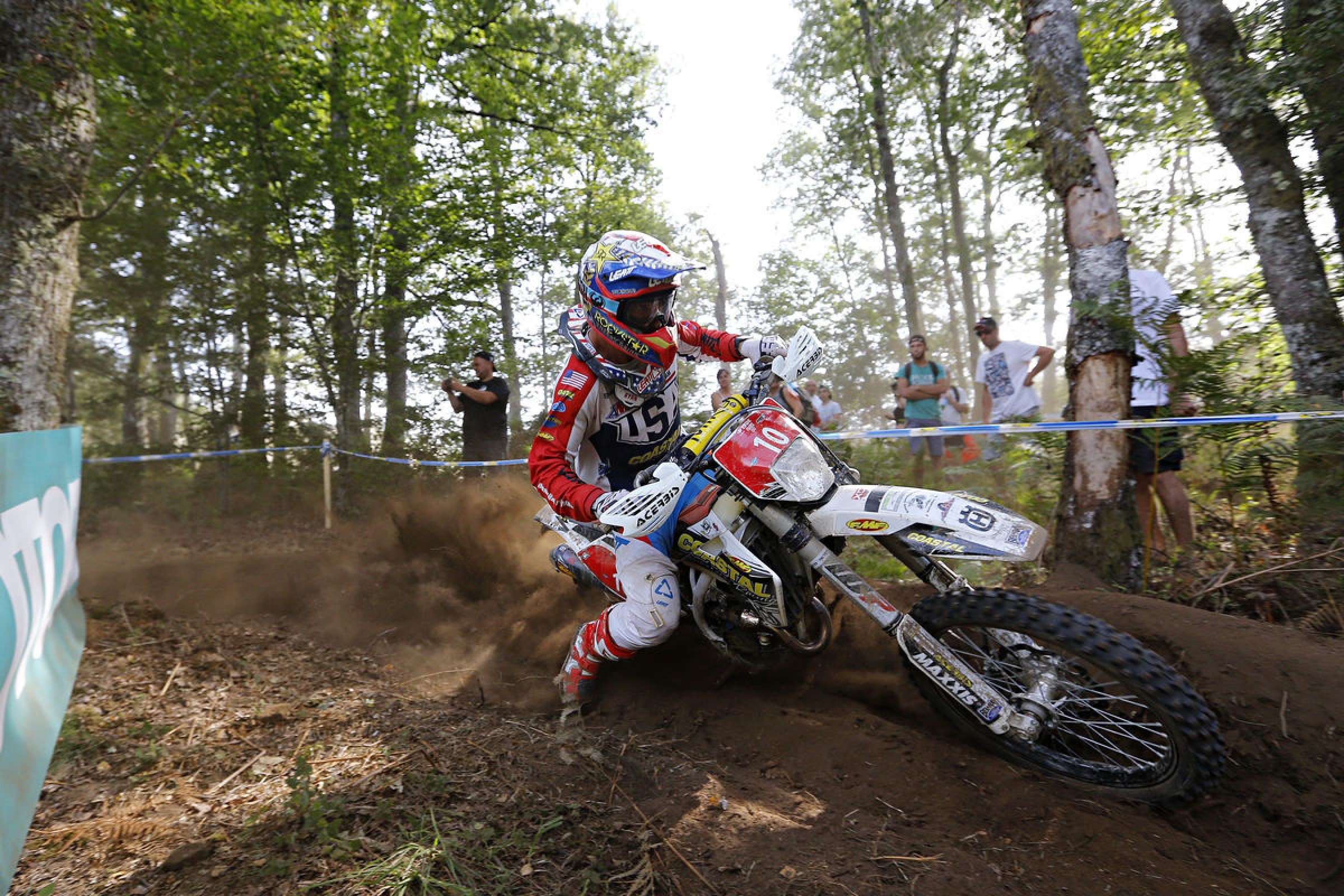 Last year it appeared Team USA’s ISDE timing couldn’t be worse, as the team lost Ryan Sipes to injury one week before the event. Losing Sipes, who became the first American to ever win the individual overall at the event in 2015, seemed like a death blow, but there was just enough time to buy a plane ticket for young GNCC XC2 rider Layne Michael and stick him on Sipes’ Husqvarna for the week. Michael was solid, Taylor Robert won the individual overall, Kailub Russell and Thad Duvall rode well, and Team USA won the ISDE World Team Trophy for the first time ever.

This year all four intended riders—Russell, Duvall, Robert, Sipes—made the event in France, and then the team suffered the absolute worst-case scenario, as Duvall crashed literally 12 minutes into the six day event. He suffered a wrist injury and had to drop from the event, and with that any hopes of defending last year’s historic victory were gone. For Duvall, it’s a double blow because he was also battling Russell hard for this year’s GNCC title. He had to miss the Unadilla GNCC over the weekend, so now he’s way down in points while also on the mend.

“It’s not like he was riding over his head or doing anything crazy, it was the first special test of the week,” said team manager Antti Kallonen. “He washed the front end and put his hands out and caught his wrist.”

“Thad [in a different class] started ahead of me, so when I was done with a test I came up on him and he was just sitting there in a chair,” said Robert. “I looked at Antti and he just shook his head and said ‘Not good.’”

Duvall’s crash was a heart breaker, but that’s how this event goes. A few years ago ISDE World Trophy teams were pared down from six riders to four, and now with every score counting, it’s very much a race of attrition. Bottom line: You have to keep all four riders healthy all week to win.

“I wouldn’t want the rules to change. Some years, like last year, they benefit us, and some years they work against us,” says Kallonen.

For Sipes, Robert, and Russell, individual honors were the only goals left. Kallonen says that helped, because all three had big goals so they never slowed down even with the team victory out the window. In the end, Robert won his E3 class and finished third overall, and Sipes took fifth overall, marking the first time Team USA had two riders in the top five overall. Russell was not happy with his week, but he managed 14th overall. Some rudimentary calculations show that had Duvall stayed healthy and finished in the top 15 like Russell, the team would have been right in the hunt. France, the home nation, also suffered tough luck when Christophe Nambotin crashed and broke a bone in his hand while leading the event. He would later crash again and break another bone! But it was late in the week, and he was able to ride slow and grind through the pain helping France hold on to win the World Team Trophy; its under-age-23 team also won the World Junior Trophy.

“Racing motorcycles, you get stuck in that mentality where it’s all about you,” explained Robert. “We’re not used to doing team sports, and this definitely turns it into a team sport. It was a bummer [when Duvall crashed], but at the same time you can’t do anything about it, and you have to go one and try to do the best you can. I thought we had a strong team and everyone was doing pretty good. At the same time, there was a lot of French favoritism, and I know from talking to Ryan Sipes and Antti, we’re motivated to go back next year and do well where there’s less favoritism. Next year hopefully everyone wants to go. As long as those guys want to go, I think we have a very good team. There are other guys that are fast, maybe even faster, and with October you could throw some moto guys in there, but we have such a foundation built, it would be hard to top that.”

On the good side, Team USA finished third in Junior World Trophy (under 23), and a trio of ISDE rookies took second in the Women’s Trophy ranks. Congrats to Becca Sheets, Kacy Martinez, and Brandy Richards for that. Richards is a two-time champion at the Rocky Mountain ATV/MC Amateur Nationals at Loretta Lynn’s, and she used her moto skills to win the Women’s division on the final day of the event, which was a motocross race.

There was a time when merely contending for wins was the goal of the American riders, but the ISDE program has improved so much recently that contending—but not winning—actually just hurts more. The World Trophy Team wants to win again. So that’s the story for Team USA this time—the most literal use of this term: better luck next year.