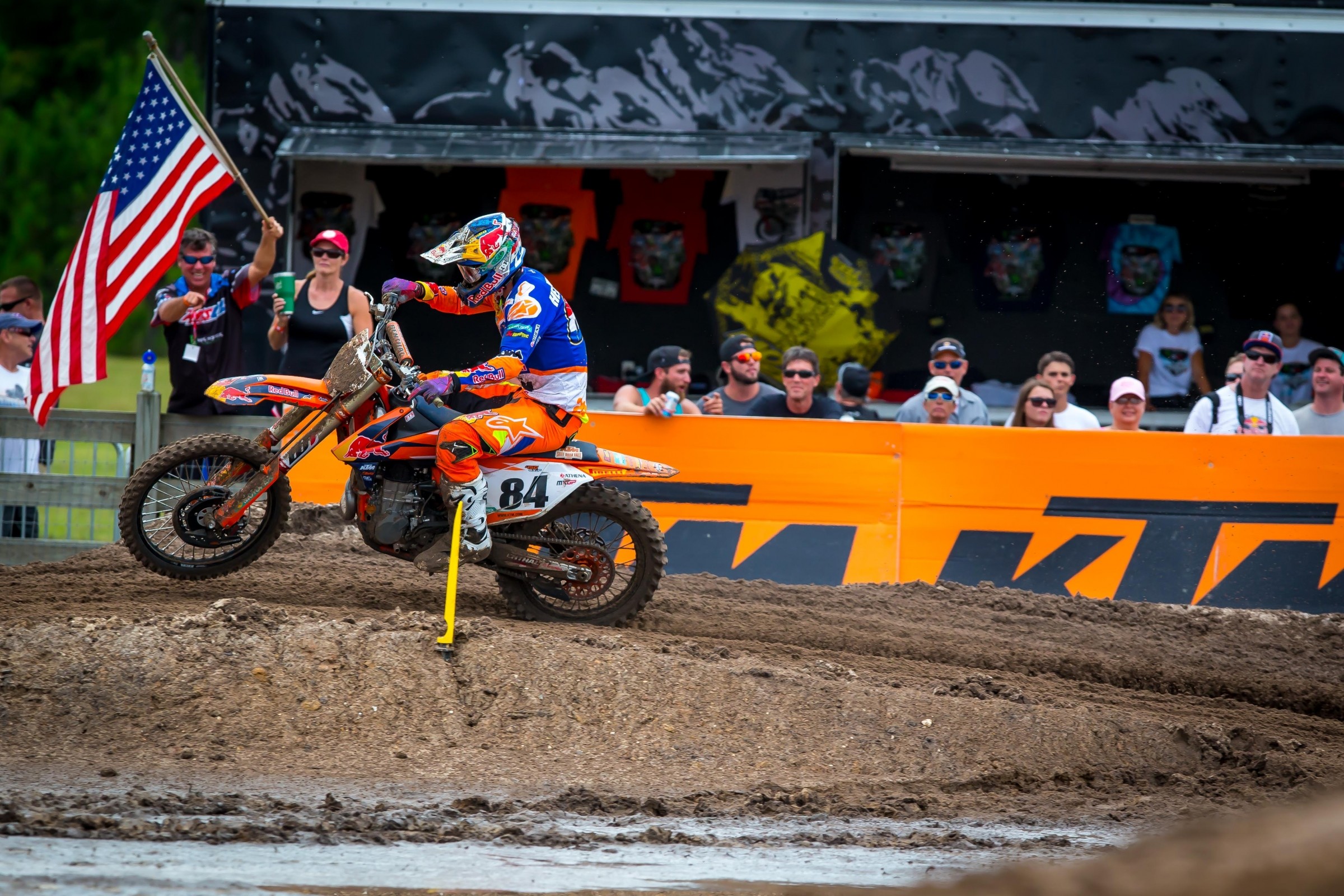 The latest edition of the USGP underwent a surprising and difficult birth due to the partnering of promoters and a late venue switch from Gainesville to an unknown quantity in the WW Motocross Park outside Jacksonville, Florida. It meant that the 17th round of 19 in the 2017 FIM Motocross World Championship was one of the most anticipated races of the season.

In terms of stories around the event it was a case of the dids and the didn’ts. A crowd did turn out to make the compact and flat facility look busy and the torrential thunderstorms in the days leading up to the weekend did evaporate in the humidity. Red Bull KTM’s Antonio Cairoli didn’t clinch his ninth championship despite only needing to tie on points with teammate Jeffrey Herlings, and the Dutchman didn't resume sparring with Monster Energy Eli Tomac in a part two from the Lucas Oil Pro Motocross Championship round at Ironman that many wanted to see.

Herlings did celebrate for the second time in eight days and further establish his flowering profile as one of the fastest motocrossers in the world. Tomac did emerge from a Saturday funk to disappear with the first moto and GEICO Honda’s RJ Hampshire did survive the conditions (despite a first moto fall and claiming he was “hurting” toward the end of the second) to post the most notable win of a young career to-date.

WW Motocross Park underwent a cosmetic lift with a jumpy course lined with waves and other obstacles not to mention variations of soil mixed in with the black sand. It needed to be rougher on Saturday for any great variance in lap times and the race order around the opening turns in the qualification heat, but duly churned on Sunday. The track drew mixed judgements but was mostly in the positive. Some of the long leaps (and the softened landings and take-offs, largely due to the stunning amount of rain that fell on Friday night) came under scrutiny. Rockstar Energy IceOne Husqvarna’s Gautier Paulin was extremely lucky to escape a mammoth dismount in the first moto. Suzuki’s Arminas Jasikonis was not fortunate and suffered a dislocated right hip. Monster Energy Yamaha’s Romain Febvre was allegedly knocked cold from a crash in the first race and therefore sat out the second.

There were some special parts. The fast first turn into a waves section invited some interesting interpretation and Suzuki’s Jeremy Seewer was particularly proactive with his lines and speed in this area in MX2.

“Yesterday I thought it would be really tough to overtake but in the first moto we were both able to come from 10th to second and third,” Herlings remarked on the opening salvo where poor getaways slowed the progress of the KTMs and allowed Tomac an ideal chance to break free. “It is still one of the best tracks on the calendar and more so than a place like Arco or Loket—but that's a personal opinion.”

The Grand Prix was the result of a first collaboration between promoters Youthstream and MX Sports. By all accounts both parties gelled effectively and the meeting was clearly richer in organisational detail for the presence of the American staff that had segued into the Florida fixture directly from the end of the Lucas Oil Pro Motocross Championship. Of course there will be a debrief and analysis from both sides as to the efficiency and impact of the Grand Prix, but the fact that it occurred at late notice at WW and attracted a large degree of interest were plus points for the future of the race. Promisingly, it establishes a framework for the 2018 Motocross of Nations, which seems more likely to be back in the U.S. for the first time since 2010, with the venue to be officially confirmed in the coming weeks.

“I think we are off to a better start than anyone anticipated,” MX Sports’ Davey Coombs assessed. “The challenges are obvious: the schedule in America, the brief time off the riders and teams have and ensuring enough American participation to make it interesting. We got the MXGP paddock here and the fans came out and enjoyed themselves. What we need is a few more AMA based riders and some better weather and it can be even bigger. I cannot remember—since the glory days of Unadilla—that we had this many people for a USGP and I think everyone working together from the AMA, FIM, Youthstream, MX Sports, and WW Ranch and Unlimited Sports, which are big rivals on the Florida motocross scene, meant we all wanted this thing to work for once. We all tried to impress each other and it showed in the facility and production. The fans came out to show that there is a desire for this kind of event we just need to find the right venue and serendipitously I think we found it.”

On this stage Herlings shone. From his superlative qualifying race win on Saturday to a successful stalk of Cairoli up until the Sicilian tipped out of the lead in the second moto and allowed the three-time MX2 champion to gain the overall. Tomac was also excellent. Not so much in his scorecard of 1-3 and as runner-up, but in the ability to turnaround a dismal Saturday where he was well off the pace and qualified with the 12th gate pick from the heat race.

“The sandier base threw us off a bit and I couldn't get any flow,” he recounted. “I was running around in 10th and it was all I had; six-eight seconds slower and I was spinning around in circles. At least we found ourselves in a better spot this morning.”

Ironically the two-day format of a grand prix was actually beneficial for the new 450MX champion. “It does drag along and feel like a long weekend, but it actually worked in my favour because I wouldn't have been up here on the podium,” he added. “I was able to get comfy and be in a position to battle for a podium spot. I’m satisfied with the weekend. I was a disaster up until this morning’s free practice!"

There was precious little acknowledgement between Herlings and Tomac in the post-race press conference and it was a shame they shared hardly any track space across the weekend. This rivalry could rumble-on if Herlings tries the National series again in 2018 or Tomac makes the next GP gate.

Cairoli raised his head to the sky after passing the chequered flag in the second moto. Fronting the race and taking his ninth moto win of the year would have meant the overall and the championship sealed with two rounds remaining. His mistake closed the ice buckets in the KTM awning, but with a 96-point lead and just 100 remaining his coronation is now just a formality and should happen in the first outing in Holland next weekend. Cairoli was riding well as the pacesetter and his holeshot was poetry in motion, but this is not the sharp #222 seen at the start of the season or more recently as Ottobiano for the Grand Prix of Lombardia (his last 1-1). The soon-to-be 32-year-old is keen to put the bigger story to bed and has been minimising risks both on the GP trail and in his training to grasp that ninth title.

Elsewhere in MXGP, HRC’s Tim Gajser was quick without really making any in-roads to the podium dispute and Rockstar Energy IceOne Husqvarna’s Max Anstie must take credit for recovering from a sore hand to place fifth overall; the young Brit is nearing the end of his first season on a 450 and has shown repeated spells of promise.

MX2 was the domain of RJ Hampshire and thanks to some shrewd use of a flattened line from the outside gate—a slot he was forced to take after a technical issue on Saturday. His starts were the bedrock of this victory and despite the best efforts of Rockstar Energy Husqvarna’s Thomas Covington (showing home fans the ability and speed that could be crucial for Team USA’s chances at Matterley Basin on October 1) the GEICO athlete was able to bank a confidence-boosting result. In fact, his nearest and most dangerous threat came from teenage Australian Hunter Lawrence on the closing lap. The Suzuki rider was on the back wheel of the Honda in the final turn, but just missed his chance. Hampshire admitted he was struggling but Lawrence—second overall for his best result in a maiden GP year and allegedly soon destined for GEICO colours himself for 2019—said he wouldn't have managed another three corners pushing at that speed.

The second MX2 moto was perhaps the pick of the bunch thanks to the finale and the wider narrative of the championship was developing a bit further back. Contact between Seewer and Red Bull KTM’s Pauls Jonass at the launch of the first moto meant both had to chase back to ninth and 10th respectively: minimal loss for Jonass’ 45-point series lead. Seewer was effective in the second race to harry Lawrence, and Jonass was under attack from the Star Racing Yamaha of Mitchell Harrison—the youngster even clattering into the Latvian on the busy final turn and going down. Jonass thankfully stayed upright, but can feel slightly battered and targeted from the weekend. Seewer’s fourth place overall meant another chink away from his rival’s rock and the gap between the two is now at 40.

The weekend was rough on native riders. Monster Energy/Pro Circuit Kawasaki’s Adam Cianciarulo had the incentive of competing on local turf, but tweaked his knee on Saturday and was an early casualty. JGR’s Justin Barcia jumped long into Paulin causing both to crash in the qualification race and Barcia pulled off with a broken Suzuki and probably even less enthusiasm to compete; he took 14th on Sunday. Yamaha’s Cooper Webb damaged his wrist on Saturday—a possible hairline fracture we were told at one point and later diagnosed as a fractured thumb.

MXGP now runs straight to the sand of Assen in Holland—the second event in the Netherlands this year and the chance for Herlings to maintain his career-long win streak on home soil—before waiting only seven days to wrap the 19-round calendar on the hillside of Villars sous Ecot in France.