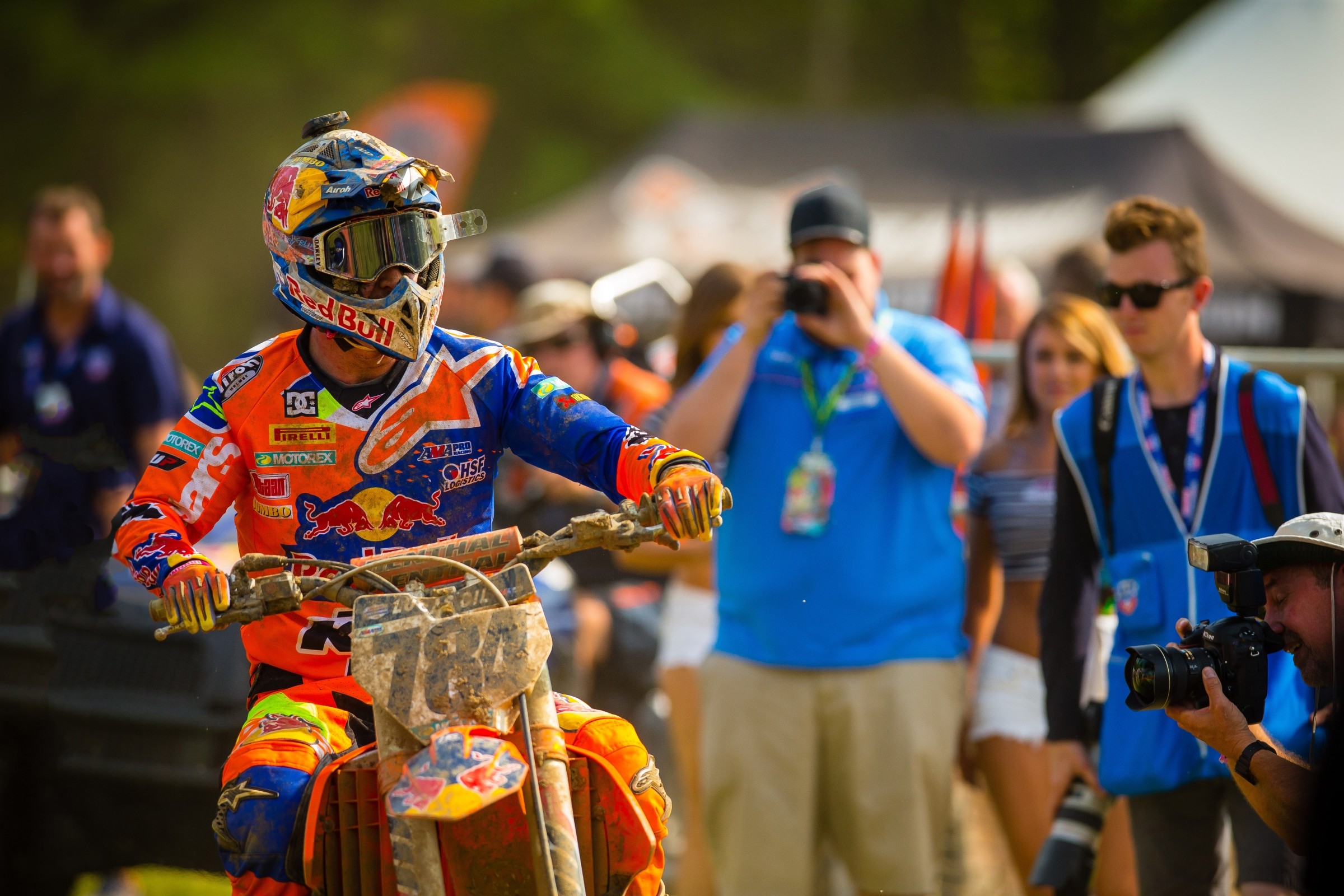 Once a year Jason Weigandt's old English Uncle Lord Alfred Weigandt sends us a letter with predictions for the Motocross of Nations. Always, always, he predicts the demise of Team USA. But Jeffrey Herlings' performance at Ironman now leaves His Lordship salivating over this weekend's MXGP of USA, as well, so he sent us another missive.

It appears Lord Alfred is very confident this will be a bad weekend for Eli Tomac. Or is he?

O’Ello!!! ‘Tis very strange times indeed for me to have awoken from my annual slumber in August, today’s weather even featured a hit of sunshine and me eyes must have been blasted by the light—everything is blurry, as if I had looked right into the eclipse. This is why I usually sleep right until the last weekend in September, however, I felt a certain gravitational force pulling me toward the tele. This was not the eclipse and the alignment of planets and moons, however, nor was it the discs in me back finally aligning themselves, either. This force was something even stronger.

I think we know what this force was. Because, unless my eyes have deceived me, JEFFREY HERLINGS JUST ECLIPSED THE WORLD OF AMERICAN MOTOCROSS!!!

Oh bloody brilliant, he just stuffed a wooden shoe up the collective arse of those septic tanks, even playing possum in the second moto to add to the historical monumentalness of that ride. The man from the Netherlands practically tickled my nether regions!

Since I proudly hail from Jolly Ole England, I do not profess to know much about guns and ammo, however I can recognise a bullet when I see one and Sir Jeffrey came to the States armed. The walls continue to tighten on the American motocross ranks, with a German taking control of last year’s classification and Marvin Musquin forcing Ryan Dungey into retirement. And we know one attempt at racing Antonio Cairoli in Italy sent a certain Mr. Villopoto packing—he could stare down the likes of James Stewart, but wanted no part of the Italian Mob, leaving Terintino with an ice bag on the tail that was tucked between his legs.

Where were we? Oh yes, HERLINGS!!!! Perhaps best of all, his success came under the cloak of night. For what the American side fails to realise is that this magician (magic bullet?) was only using this race win to distract the world from his real goals: stealing all the secrets and bringing them back to use at home. He is like Robin Hood! It is no coincidence that Sir Jeffrey immediately took up residence at the famous Baker’s Bakery in Florida, and then raced out of the same lorry as Musquin, and even on the same style of bike. Ryan Dungey is retired now but his secrets will live on, Jeffrey burying the treasure somewhere in the sand near the Belgian/Holland boarder. Don’t go searching for it, Americans, for the last time they attempted to breach those soils, Justin Barcia ended up tied to a fence, and it took outside interference from Chuck Sun to get him out.

There is one American who already knows how this works. He, too, was wise enough to get his tea and crumpets at this famous Baker’s Bakery, but he’s a lad who has always been keen of plan. He is Zach Osborne, the most English of Americans, and now, not surprisingly, the most successful. Come on, Zach, it was nice what you did, returning to American stadiumcross to pad the bank account with an easy championship run. Now that you’ve done it, how about you move back over and have another go with us?

What’s that you say? Zach is already returning home? Of course! The lad has made this his master plan all along, circling the Matterly des Nations on his calendar some five years in advance, purposely advancing himself in small increments, so as not to draw attention. Then this year, with the des Nations date locked in, he ratched himself to the front so he could gain a birth on Team USA and then perform an inside job—expect Zach to yield to fellow Brits Searle, Wilson and Anstie. Look, mates, Osborne is an English surname made famous by Ozzy. Zach is simply part of the Osborne Family!

We must wait for des Nations, though. The Americans have planned revenge this weekend at the bloody hot Double U Double U USGP of the USA. Ellis Tomac is a sponge. He must be keen to take more lessons from Herlings, seeing as Jeffrey essentially took him to school over the weekend—he even threw in some tear off lessons during the second moto. Did you see that?

Last year Mr. Tomac did compete with vigor at two USGPs—my theory is that he just wanted to race somewhere where he didn’t have to deal with that fast German kid. You know who. However, he competed in the MXGP class, no doubt because he was scared to tangle with Jeffrey in MX2. He won the motos, but that was because Tim Gajser was worried only about clinching a title at one round, and then was in championship hangover mode the next weekend, undoutably. Latvian Vodka will do that to you! It was one giant work to put American defenses down, including last year’s ‘Nations. There, the Dutch had the event in hand (thanks to a kamakazi move by a rider from Japan on America's Anders Jasonson) until the very final lap, when Searle, part of the deal, allowed Romain “Empire” Febvre to pass him, thus pushing France to the top step of the podium.

The U.S. now thinks of France as a favorite, so the Dutchman was able to sneak in and steal not only thunder and race wins, but also the secrets to the Baker Bakery. Even the move of the GPs from Helen Glen, California to Florida was simply a move to get spy Herlings closer to the core of American motocross operations. At the Bakery, he gets to see where the sausage is made.

Not coincidentally, I hear Mr. Musquin has decided to take this week off from riding, and so has Osborne. They’re on the take, turning a blind eye and leaving the gates unlocked for Herlings to discover all. Once he figures out the entire Bakery menu, he will begin the systematic takeover of stadiumcross as well. Don’t expect resistance from Elton Baker himself, either. South Africa is still a colony.

A few U.S. agents remain. Cooper Webb is there, but has never shown the type of pace needed to match Herlings as far as I can remember. And Justin Barcia? Lad is engaged to a Brit! He’s in on this as well!

I’m so excited by all this that I can’t keep the secret anymore. This entire event is rigged as a trap for Ellis Tomac! He will come in bent on revenge for Herlings, huffing false confidence due to last year’s MXGP wins, and become the poster lad for this takeover of American racing by the Europeans. I feel badly for him. So allow me to park me biases for one moment and actually give a bit of advice to the young American: Ellis Tomac, do not race this weekend. Please, do not race. Do not go to bloody hot Florida and race the MXGP riders at this USGP. Please, please, I beg of you, don’t race them this weekend.