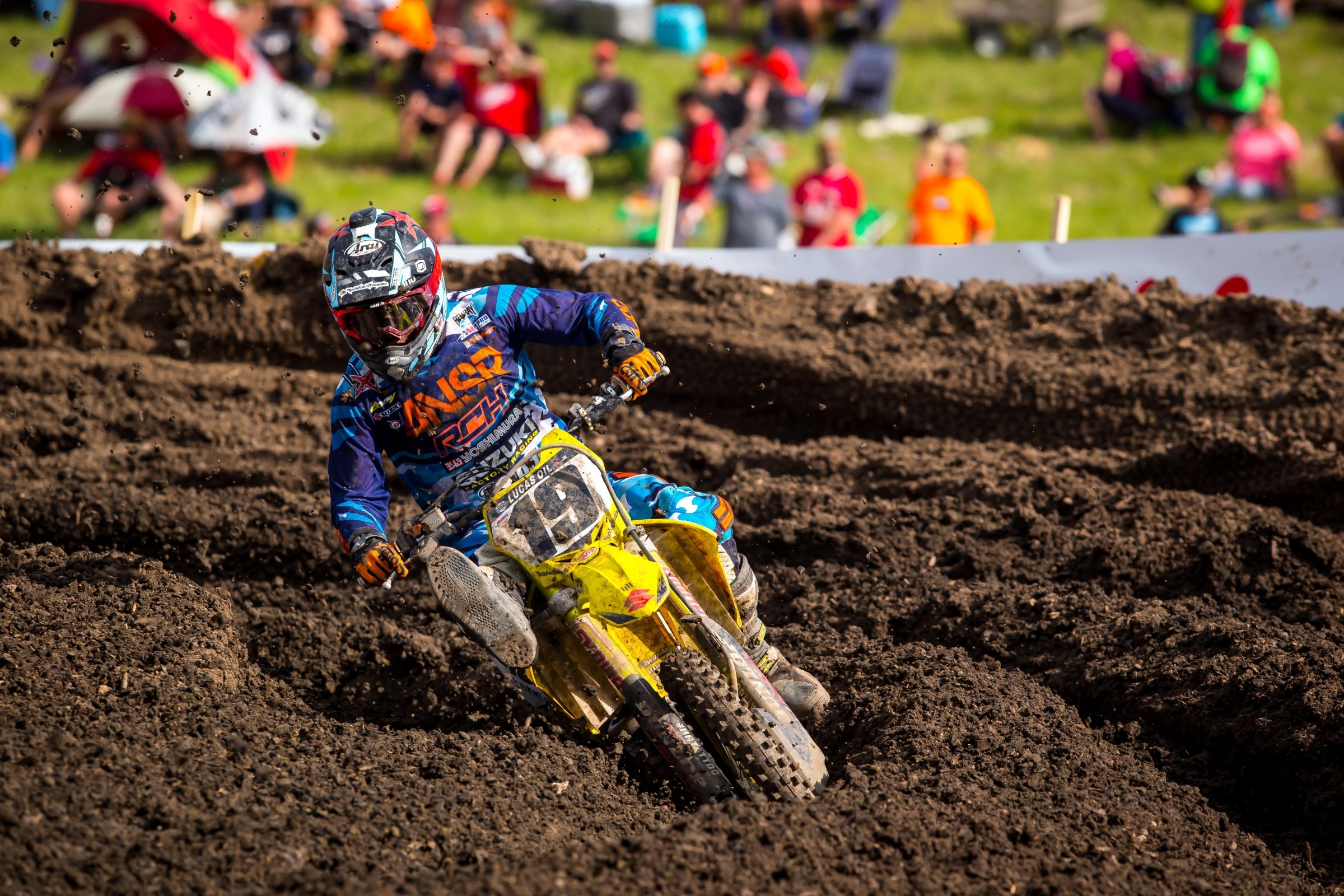 Out With a Bang

When Justin Bogle won his first career moto at Thunder Valley it seemed like the wins and podiums just might start flowing. Unfortunately, that didn’t happen. Thanks in part to a sore shoulder, he’d averaged worse than 10th place per moto coming into Budds Creek. Then, everything changed and Bogle went 1-3 for the first overall of his career. His team, RCH/Yoshimura Suzuki, is closing up shop after this weekend’s race in Indiana, and in the post-race press conference Bogle said everyone wants to “go out with a bang.” If Bogle can get some good starts, look for him to try to do exactly that at Ironman Raceway. –Aaron Hansel

It’s hard to believe that Adam Cianciarulo, once thought of as the next can’t-miss-kid, took this long to record his first National win, but just like Bogle, Cianciarulo won his first career moto, and overall, at Budds Creek last weekend. After the race Cianciarulo talked about some of the injuries he’s had to come back from and how at times he’s even considered quitting. Of course, after winning at Budds Creek, the only thing that’s on Cianciarulo’s mind is probably getting his second win at Ironman Raceway this weekend. We’ll see if he gets another one at the final round of 2017. –Hansel

It’s pretty simple. Only Eli Tomac, Blake Baggett, and Marvin Musquin are mathematically still in the running for the Lucas Oil Pro Motocross 450 National Championship. And with a 28-point lead over Baggett and a 30-point gap on Musquin, the championship reins are being held pretty firmly by Tomac. In fact, he can even clinch the title in the first moto if he gives up a maximum of three points or less to Baggett and four points or less to Musquin. After Budds Creek, Tomac said going into protection mode doesn’t work and that there’ll be no backing down at Ironman, so look for Tomac to try and seal the championship deal in the first 450 moto this Saturday. –Hansel

The race for the championship is over in the 250 Class—the title belongs to Rockstar Energy Husqvarna’s Zach Osborne, who clinched the title last weekend at Budds Creek, the site of his very first overall victory one year ago. Now the only question is whether or not he’ll keep charging at the final race of the year. He doesn’t need to, the title is his, but he’s also a fierce competitor who wants to win every chance he gets. Nobody can predict the future, but we’re fairly confident Osborne doesn’t plan on taking it easy on the competition in Indiana. Expect severe speed with a strong chance of victory from the #16 on Saturday afternoon. –Hansel

We're all aware that Tomac is on the verge of wrapping up his first Lucas Oil Pro Motocross 450 National Championship this weekend, but there's another points battle you might not know about that's extremely tight. In the 250 Class, Kawasaki leads Husqvarna in manufacturer standings by three points (454 to 451). Each manufacturer earns points only from their top-finishing rider in each moto, so if Zach Osborne puts a collective four points on the closest-finishing Kawasaki rider in both motos at Ironman Raceway, he'll hand Husqvarna yet another championship this weekend. –Hansel

Following a week of will he or won’t he, KTM confirmed late Wednesday that three-time MX2 World Champion Jeffrey Herlings will make his Lucas Oil Pro Motocross debut at Ironman. Herlings decided to come over early for the MXGP of USA on September 2-3, and has spent much of the week training and testing with Aldon Baker. Herlings, who rode press day on Thursday, will face a big adjustment, as Pro Motocross runs on a one day schedule (compared to two days for GPs), AMA regulations vary from the GPs, and the effects of jet-lag could still be weighing him down. Heat and humidity shouldn’t be a factor, though, as temperatures are only expected to reach a high of 77 on Saturday. Since 2009, the few Grand Prix riders to race in the U.S.—Clement Desalle, Kevin Strijbos, and Shaun Simpson—have all had success. Most expect the same or more from Herlings this weekend. –Chase Stallo

This weekend and the MXGP of USA the following weekend will be pivotal races for Justin Barcia as he returns from a three-race absence due to a concussion. It’s been rumored that Barcia, whose contract is up with JGR, will not return to the team. Barcia has struggled with injury all year, and has yet to make a podium appearance in either supercross or motocross. That said, he’s had tremendous success at Ironman Raceway, which hosted its first Lucas Oil Pro Motocross race in 2014. In two appearances, Barica has finished fourth (2015) and second (2016) and hopes to end the season on a strong note, a la Justin Bogle, to give himself more chips at the bargaining table. –Stallo

While nothing has been officially announced, it’s expected Justin Hill will leave Monster Energy/Pro Circuit Kawasaki (for a second time) and sign a two-year deal with AutoTrader.com/JGR Suzuki (250s in 2018, 450s in 2019). Hill has been out since Millville with what the team is calling “lingering injuries,” but will return for the final round. Coming off a 250SX West Region title campaign, Hill has struggled all summer, earning just one moto top five in seven rounds. Can Hill get back on track in the final race of the season—and likely his PC career? –Stallo

Aside from the 450 Class championship battle, which Hansel laid out above, there are two other points battles worth watching out for this weekend. While there is still a slim chance for Baggett and Musquin to clinch their first 450 championship, it will likely fall into the clutches of points leader Eli Tomac. There are only two points separating Baggett and Musquin for second, and after Budds Creek Baggett told our Steve Matthes that the position was important to him. “I’d much rather be the first loser. So, I’m going to give it everything I got.”

One other position to keep an eye on is the battle for fifth between Cole Seely and Justin Bogle, as Seely enters the weekend with an eight-point lead over Bogle. Seely has outscored Bogle in points in four of the last five rounds, but Bogle is coming off his first career overall. We’ll see how this battle shakes out on Saturday. –Stallo

The 250 championship has already witnessed seven different moto winners in 2017, which included Adam Cianciarulo’s first last weekend. One rider to keep tabs on this weekend is RJ Hampshire. Following mechanical problems at RedBud, the GEICO Honda rider has been a consistent threat for the podium. Check out his stat line over the last five rounds: 5-4-5-7-6-2-8-6-3-7. With front-runners like Savatgy, Dylan Ferrandis, and Shane McElrath out, we may see Hampshire score another first this weekend. –Stallo