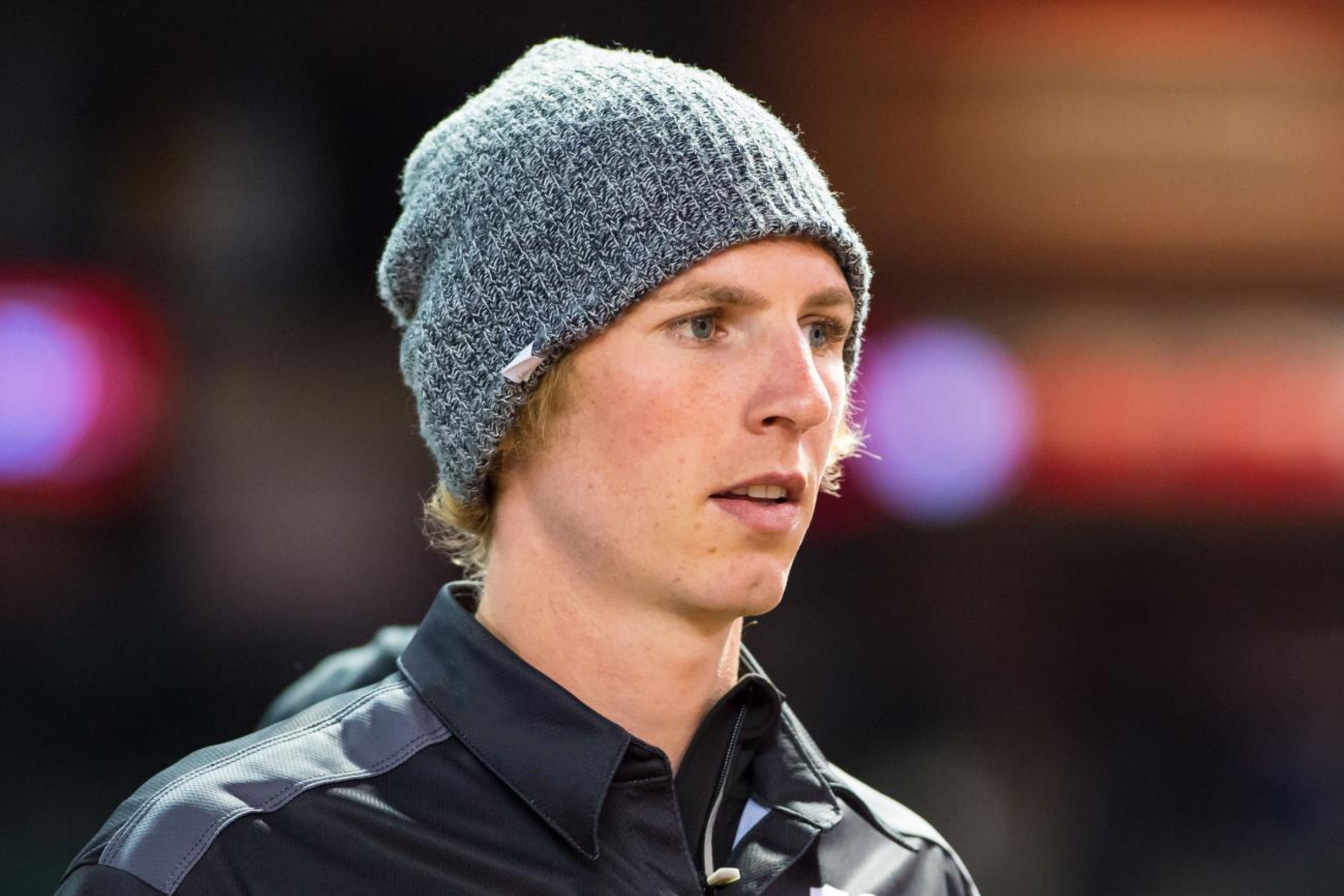 This is strange territory for Jake Weimer. The #12 rider has inked a deal with a team for 2018 Monster Energy Supercross and it’s only August! Over the last couple of seasons, he either hasn’t known what he was going to do until late in the year or, like last year, hasn’t even known until the new year started! Weimer agreed to an SX-only deal with MotoConcepts Honda alongside Justin Brayton and Vince Friese. We caught up to Jake to talk about the new team.

Racer X Online: Congratulations on the MCR deal. Take us through the deal. For one, you’re signing early, which is nice for you. How did it happen?
Jake Weimer: Tony (Alessi, MCR team manager) called me. It had to have been six or eight weeks ago now. I didn’t know what I was going to do and was kind of just trying to take a step back. Supercross this year was just frustrating and tough because I didn’t think I was going to race. So, I kind of hadn’t been preparing for it. I agreed to a do a four or five race fill-in for JGR Suzuki, which ended up turning into 17. It’s not fun to race if you’re not prepared and that whole deal. But six to eight weeks ago, Tony called me. It was weird because I hadn’t talked to anybody. I didn’t know what I was going to do. Then he called me and literally within 10 days I had three calls to do three different things. One deal for supercross with MotoConcepts. Another deal to go do some GPs, and a deal to go to Australia to do the supercross series. So, then all of a sudden I’m like, well, shoot. Kind of got my wheels turning.

Then I talked to Tony, talked to [team owner Mike] Genova. Called [Justin] Brayton. Talked to Brayton about it. Then I asked Tony if I could go ride the bike. He said yeah. I rode the bike Saturday of Millville, so there weren’t really many people at the track. It was calm. Then basically since that day I was like, all right, this is what I want to do. I want to race supercross. I want to get this deal done so I can get a plan together so I can be ready, I can be fit. So, since the day I rode the bike, the next week I probably called them five or six days out of the seven, Tony and Genova. I wanted to do it. I rode the bike. The bike was really good. It’s a good deal, so I’m like, “Someone’s going to sign this.” There’s a handful of guys looking for something, and just the whole scenario was good. Being based out of California, which I am, I’m pretty flexible, but just the way the whole thing was mapped out, it was just something that was really, really appealing to me and I have time to get ready. I haven’t been in this situation pretty much since 2014 where I’ve known ahead of time that I know what I’m doing and I have time to be fit and get all my work done.

They’ve come a long way with the Honda support and Brayton putting some good results for them last year, but there is that little bit of controversy with the MotoConcepts guys. Vince Friese is part of it and he’s on your team still. But they are kind of trying to turn a new leaf. So, I guess for you, did you have to weigh that in, some of that thought?
Yeah, for sure. Tony’s actually called me maybe … for sure last year and I think maybe the year before. Yeah, absolutely that played a factor, but even from the outside looking in, it’s apparent that they’re trying to make a big—I shouldn’t even say big. They’re trying to legitimize the team. They want the team to be taken seriously. So yes, that did play into it, and from everything I’ve seen the last couple years and talking with them and riding the bike, talking to Brayton, they’re on that road. That definitely was a factor. I think they’re making strides to be a respected team in the paddock. I definitely think they’re making the right steps.

Brayton’s happy there. I’ve talked to him about it. Tony apparently is a great manager for all the guys. Whatever they need, if he can’t do it he’s straight up about it. If he can, he tries his hardest. I’ve talked to [Kyle] Chisholm as well and everybody’s pumped on how Tony works with everybody.
When I test rode the bike on Saturday the day of the race at Millville, in-between sessions when I was riding we’d pull up the race on the phones and whatever and we’re watching. We’re sitting there and Tony’s like, they had just taken off or something, and Tony’s like, “Rewind that. Where are the guys lined up on the gate?” He’s in it! I don't know that you’re going to find somebody more knowledgeable than Tony. There’s been instances in the years past that we’ve all watch unfold, but I think they’re making an effort to make the team professional and to be respected and be legitimate. Like I said, I think they’re making the proper steps.

What did you think of the Honda? What kind of suspension access are you going to have?
The bike that I rode, the motor was legit good. Good motor. Everything except it had production suspension clamps on it. So, I was stoked. Obviously, everybody expects me to say that.

[Laughs] You’re five seconds a lap faster?
I wouldn’t tell you that. But for sure everybody likes something specific, but it’s definitely a chassis. Everything starts with the chassis. If you don’t have a good chassis that has options—meaning that you can put different parts on it and kind of everybody can pick what they like, the feel. From the starting point, it is a good chassis. The feel is nice. It’s not hard to turn. It’s easy to turn. It feels like it handles well. It’s light. So, I think initially, absolutely it’s a good chassis. The motor blew my mind. It was really, really good. As far as once we get into supercross, we’ll be on KYB. We’ll have good support and we’ll have good suspension.

Monster [Energy] Cup? That’s the debut of Jake Weimer on the MCR team?
Yeah, Monster Cup. Brayton will be in Australia doing the supercross series down there. So, Monster Cup will be Friese and myself.

Two years ago you went from a Kawasaki at Tedder to the RCH guys. This year, like you said, you went from the couch to JGR team. This has got to be making you feel really well for all this preparation. It’s August and your ride is settled. That’s got to be a really nice feeling.
Yeah, it’s been crazy. Such a change in the last couple weeks. After supercross this year, the JGR guys were awesome to me. Cool group of guys. It was for me personally just a tough, big bite to take. Things didn’t really work out the way I was thinking they were going to and I was frustrated. I hadn’t been riding and training the way … I didn’t think I was going to race. I had already had a guest credential from Feld to basically go sit in the stands because I had to watch. I was not planning on racing.

So, Wednesday before Anaheim, my phone rang and it was Jeremy Albrecht and I was like, oh jeez. Initially it was four races and I was like, well, whatever. I’ll do the four races. I wasn’t planning on retiring, so I was like, I’ll do the four races and I’ll be able to keep my permanent number. So, that was really kind of the logic behind it. It turned into more than that. It was a frustrating year for sure. But like I said, I haven’t been in this situation where it’s August and I know what I’m doing. I can make a plan. It’s definitely exciting. I can give it an honest run. I’m excited about the bike and the team. It’s a good feeling to be able to put a plan together and get the work in. It takes a lot to be ready. It’s exciting to be done now and know what I’m doing. It’s been quite a change in the last six weeks.