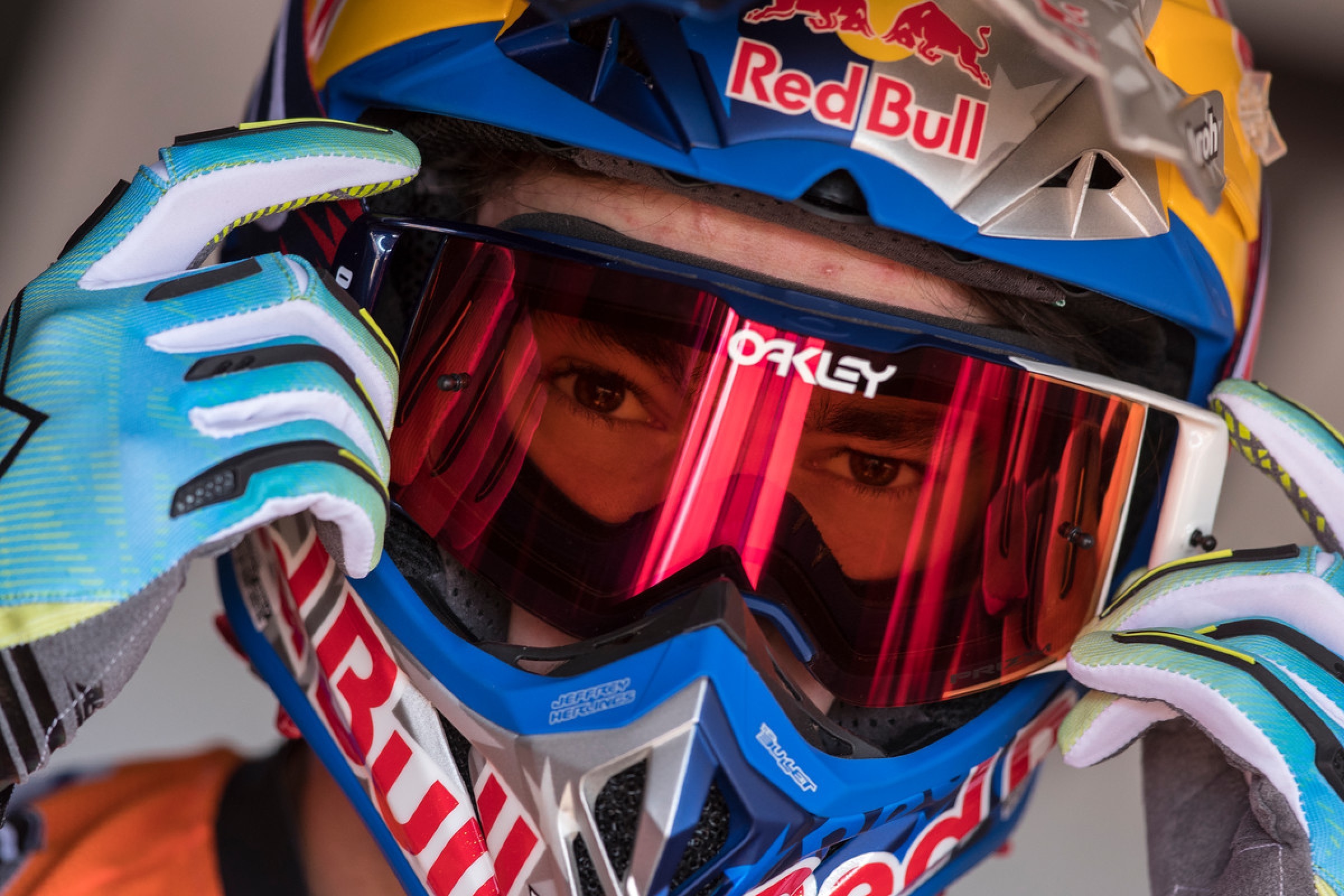 3 on 3 Questions for Ironman

Jason Thomas: Well, nothing is over as Matthes would say, but Eli Tomac definitely helped his situation in the second moto last weekend. After losing eight points in the first moto, which chopped down the gap to 23 over Marvin Musquin and if not for Justin Bogle's heroics, could have been 20, I was beginning to wonder if Tomac was going to let this slip away. That second moto, though, he came out and dropped the hammer on everyone. He pushed his lead back to 28 over Blake Baggett and 30 to Musquin. It gives him a huge cushion as we arrive to Ironman and quieted all of the whispers that had been growing louder and louder. It's not over because racing is still racing, but he definitely did himself a solid that second moto.

Steve Matthes: I think barring a mechanical on the Kawasaki, Tomac should wrap this up this weekend. His second moto ride at Budds Creek helped him a ton obviously and if Baggett goes 1-1, he has to go 10-10 and if Musquin goes 1-1, he's got to go 11-11, so those are scores that are entirely doable says Captain Obvious. I don't think he'll go balls out for the win this weekend, Musquin or Baggett or maybe Jeffrey Herlings might win with Tomac taking what comes to him and wrapping up a title that's been a bit bizarre. The first one is the hardest though and they might come easier after this in the 450 Class for Tomac.

David Pingree: They say death and taxes are the only “sure” things in this world, but Tomac wrapping this title up is pretty close. Tomac has certainly had his moments where it looked like the pressure was getting to him, so I don’t think anybody wanted to call it before the final moto. However, it would take something catastrophic for this to come unraveled.

JT: He will definitely be in the mix to win. With Tomac’s focus on the title, I don't expect him to do anything silly in either moto. To see Tomac score two top five finishes and ride safely within his limits wouldn't shock me at all. Musquin will be going for a moto sweep and attempting to maximize his points, not only to catch Tomac, but also pass Baggett for second in points as well. Baggett is dealing with a thumb injury so he's not at 100 percent either. So, to answer the question, I could see a KTM sweep of Marvin, Baggett, and Herlings in no particular order this weekend. I don't see Tomac taking any risk or putting himself in harm's way which may have him off the podium for the day, but leaving with the #1 plate. The door is open for Herlings to win if he can beat Musquin.

Matthes: My prediction on the Fly Racing Racer X Review Podcast was 4-2. He'll struggle like most Euros with the lack of track time because of the two short practices, but he's a world class rider and will adapt. I put him for sure on the podium with first place being around 30 percent, second place around 30 percent, and third place taking up 40 percent. ALL percentages are subject to change.

Ping: I think he would do well simply because he has nothing to lose. Tomac will be playing it safe, so it could be a really good race between the KTM trio of Musquin, Baggett, and Herlings. It will be interesting to see how he adapts to the different format here in the U.S., and also the different style and prep technique of the American tracks. Herlings is incredibly talented so I’m sure he’ll be game. Hopefully he comes over because it would be a nice prelude to the USGP.

3.) Is Bogle's win a "riding for a job next year" performance or was he just due?

JT: I think it was a bit of both. There is no way to downplay the urgency that Bogle has to feel with his contract situation. That's simply human nature and a dynamic we have seen play out year in and year out. That same scenario was going on at previous rounds, though, and he didn't do so well. He was riding really well at Unadilla and if not for a first lap problem in the second moto, could have been on the podium overall there, too. His starts are putting him in great positions to succeed and his overall performance has improved greatly since his move to Florida to train at Ricky Carmichael’s farm. I think it's a combination of these factors, but his need to perform could point to his original move to Florida. If he was locked into a long-term deal, does the sense of urgency surface in the form of changing his entire program and moving his life to Florida? That may be the real question right there.

Matthes: Well, you've got to admire him for looking in the mirror and deciding that just being so-so with some crashes thrown in there isn’t enough for him. Moving down to work with Jeannie Carmichael at the GOAT Farm has been great for him because he's got talent. When you watch a guy like that ride you can see that he knows what to do. His Lakewood win showed us that he was capable of winning so his Budds Creek win wasn't a shock to me. So, because of that one moto win, I'll go with that he was due.

Ping: It didn’t hurt that he is searching for a job for 2018, but he’s shown flashes of brilliance all year long. Bogle’s problem has been consistency and he was finally able to string together two motos last weekend. The credit certainly goes to Bogle for his commitment to the job. It isn’t easy to pack whatever you can fit into a van and move to Florida away from all family and friends. I love seeing a guy go all-in like that and having it pay off. If I had a 450 slot open for next year he would be at the top of my list.