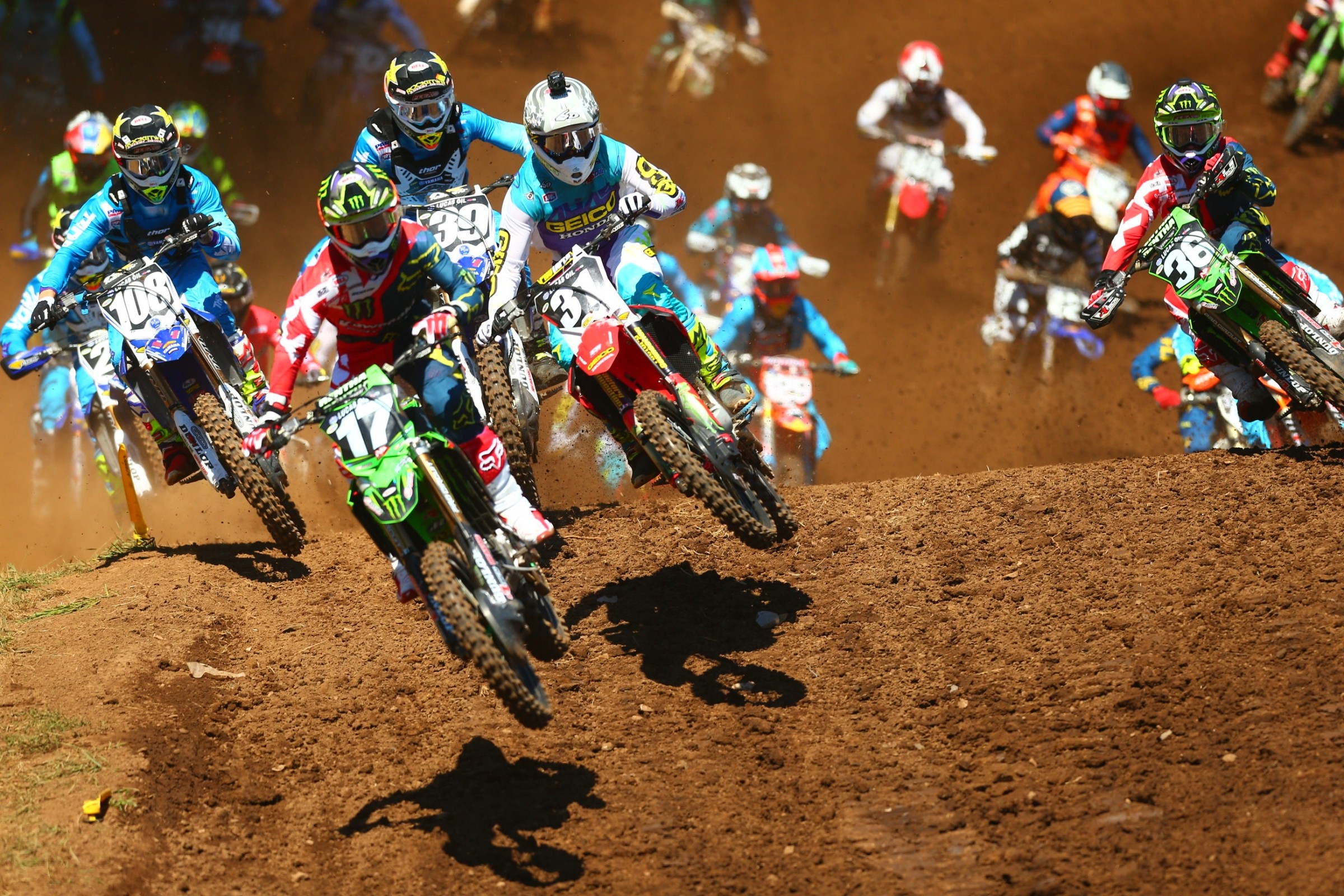 Revenge. It seems to happen a lot in this sport after a points leader has had an off weekend, and with both Zach Osborne and Eli Tomac failing to win last week at Spring Creek, you couldn’t help but think the competition might be in for some severe pain in Washougal. But did that happen? Well the answer isn’t totally black and white. While neither Osborne or Tomac were able to dish out beat downs today, both left in even better shape in the championship. So while both had productive weekends, they’ll both have to wait two more weeks before they get another chance to show everyone who’s boss.

Their defeats weren’t for lack of trying though, that’s for sure. In the post-race press conference Eli Tomac was quick to dispel any notion that he was managing a championship and simply settling for second. He gave Marvin Musquin full credit for being the fastest guy on the track and said Musquin simply had a small edge on him everywhere today.

As for Osborne, his starts were the weak link in his chain. After getting going in basically dead last in the first moto Osborne staged an incredible charge that saw him come all the way back to fourth, a spot he nabbed from Mitchell Harrison on the last lap right before crossing the finish line. He nearly took third from Ferrandis too, finishing just half a second behind the Yamalube Star Racing Yamaha rider. The superb effort took its toll though, and an exhausted Osborne found himself throwing up afterward. Even so, Osborne still managed a strong ride in the second moto, battling his way to third, which handed him second overall. Huge credit to Osborne for giving it everything he had despite having a huge points lead on account of the injured Alex Martin’s absence.

How about Savatgy and Musquin? Both are rolling right now, with each taking their second overall victory in a row. Sure, Savatgy had a little help when moto one winner Aaron Plessinger went down in the second moto while trying to make a move on Osborne, but a win is a win, and it’s not like he was handed the second-moto victory. RJ Hampshire made him fight for it, at one point passing him and owning the lead for multiple laps. Savatgy reeled him back in though and took off for a convincing win.

Sign us up for whatever’s in the water over at the Rockstar Energy Husqvarna Factory Racing truck. The team is an absolute podium machine these days! Osborne can’t help but crank out wins and podiums, even when he has bike problems, and Jason Anderson was on the podium five times in a row, starting at Glen Helen. Then Dean Wilson took over the streak by taking third and second at Southwick and Spring Creek, respectively, and today Martin Davalos kept the streak alive by taking his first podium at a National in nine years! No wonder everyone’s always talking about how happy everyone is there these days.

The same cannot be said of Autotrader/JGR/Suzuki’s outing at Washougal. Other than some pretty solid motos from Weston Peick, who went 6-8 for seventh overall, it was a bummer of a day for the team. Kyle Cunningham’s bike had an issue and wouldn’t start up before the first gate dropped, resulting in a DNS (credit to KC for rebounding and charging to eleventh in the second moto), and Justin Barcia crashed hard in practice, got knocked out, and left the track in an ambulance with neck pain. Fortunately he was released from the hospital after everything checked out okay, but it’s definitely not the way anyone wanted his day to go, especially after logging some pretty strong rides lately.

Today probably wasn’t the day Rocky Mountain ATV/MC KTM/WPS was hoping for either, although it wasn’t terrible. Blake Baggett said his thumb isn’t getting any better and at this point he’s just trying to hang on until the season ends and he can get it fixed. Benny Bloss went down on the start of the first moto and had to come from dead last, which limited him to 17-11 for fourteenth. Dakota Alix had a pretty good day though, motoring his way to tenth overall via 12-12 moto finishes.

And finally, not the best weekend for RCH/Yoshimura/Factory Suzuki either. News dropped that the team would be shutting down after the season, the rig hit a deer on the way to the race, which did some damage to the front, and Justin Bogle, who was riding with a sore shoulder he hurt last week, faded substantially in the second moto to go 8-10 for ninth. Not a bad result, but you know he would have liked more after a great start in the second moto. Bisceglia, who’s filling in for the injured Broc Tickle, took tenth in moto one, which is pretty good, especially considering it’s only his second race back from a long, injury-induced layoff, but he ended up crashing out of the second moto. Hey, there’s always the next round, right?

Let’s get back to some more positive news. Cole Seely has been working hard to break through to the next level in motocross lately, and it seemed to pay off at Washougal. He was third in the first moto! He was a solid fifth in the second moto, which netted him fourth overall. Definitely a sign of improvement from Seely, who wasn’t performing poorly to begin with.

Elsewhere in the 450 Class there were some pretty good rides. Justin Hoeft, who hasn’t raced since Glen Helen (which was his first ever National, by the way), came up to Glen Helen and killed it on a 51Fifty Yamaha, going 11-14 for eleventh overall. Only his second ever pro National and he nearly took a top ten in the premier class! Privateer Henry Miller was great too, logging 13-13 results for twelfth overall.

In 250 action Adam Cianciarulo experienced the ultimate heartbreak in the second moto today. After taking second in the first moto Cianciarulo was running in position to take the overall late in moto two. He was trying to get around RJ Hampshire for second, but he got stuck behind him and “kind of lost [his] rhythm.” Still, all he had to do was hold off Dylan Ferrandis on the final lap and the overall was his. Ferrandis refused to go easy on Cianciarulo though, and passed him with about half a lap left. That ripped the overall out of Cianciarulo’s hands and placed it firmly in Savatgy’s, who scored an unlikely overall victory via 7-1 results. That wasn’t the worst of it for Cianciarulo though. He ended up in a three-way tie for second with Osborne and Ferrandis, but because he finished behind them in the second moto, the tie-breaker pushed Cianciarulo all the way back to fourth. How often does one spot make the difference between winning the overall and not even making it on the podium?! Afterward Cianciarulo admitted to us he “blew it,” and that he didn’t know the pass was for the overall win. His mechanic wrote it on his pit board, but Cianciarulo told us he never read it. When the roost had settled Cianciarulo said, “Oh if I had known it was for the overall I would have ghost ridden my bike to pass him [Ferrandis] back if I had to.” If he had, he may have won his first ever National.