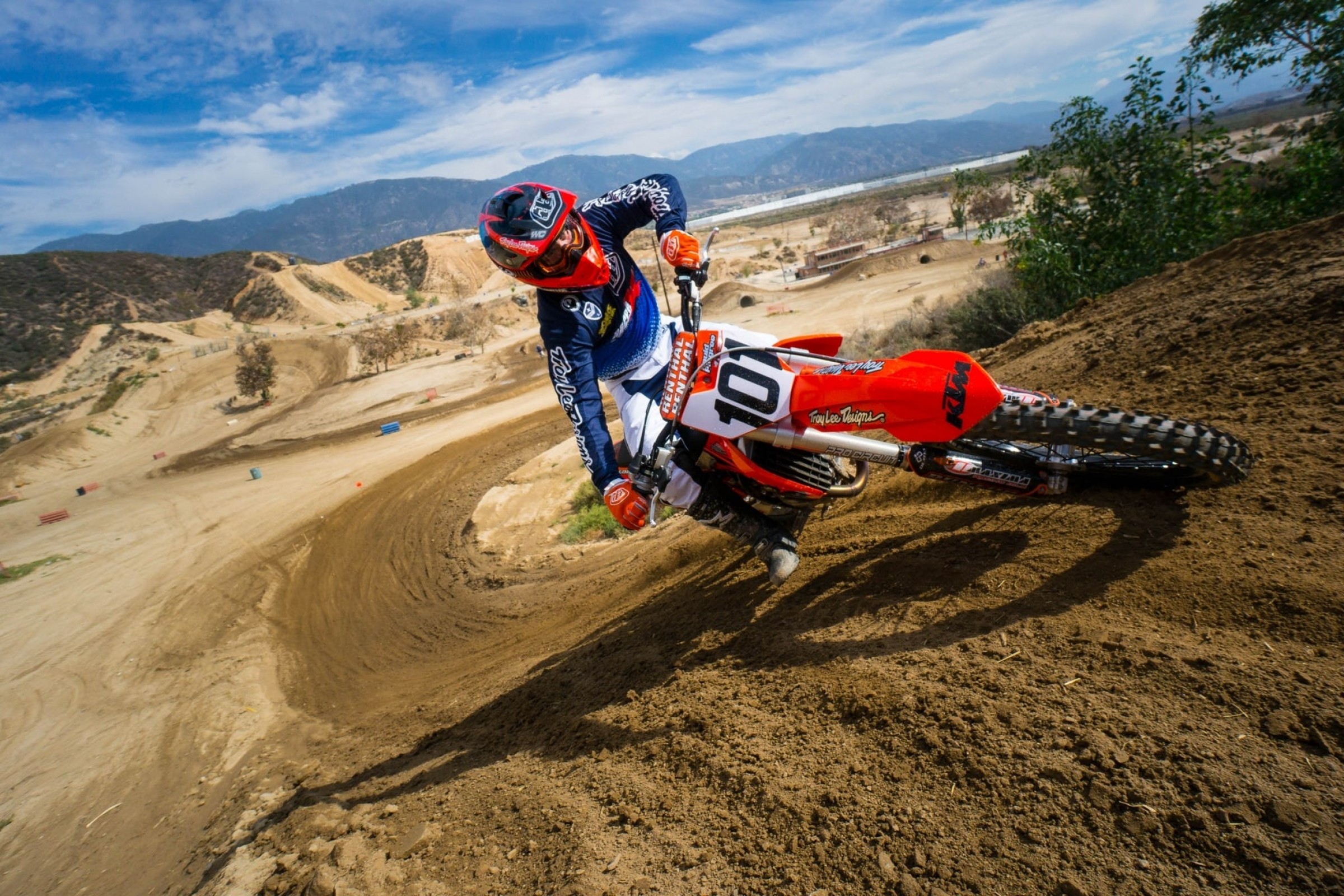 I've been getting into suspension tuning and bike set up a lot lately, even going the distance of adjusting my shim stacks. I have become picky with how I want my bike to ride as I have gained more experience. This has made me wonder why there aren't adjustments on the forks and shock that will allow a rider to adjust the bike for compression only or compression and rebound over a jump. I think KTM had some sort of adjustment on the top of their forks at one point. Riders pull tear offs over jumps. They have the ability to adjust their clutch over jumps. Just a lil twist of this knob here and perfecto! A better set up because the track got rougher during the end of a moto. I haven't heard a rider complain during a post-race interview in a while because of bike set up. This solution would absolutely put to an end to anyone complaining about suspension setup. Probably the last rider I can remember was either Ken [Roczen] when he switched to RCH or [Chad] Reed. Ken's fix probably wasn't possible through clickers though. Also, do bikes not have knobs on the suspension for riders to adjust while riding because riders can't be trusted to make those kinds of calls?

While I appreciate your enthusiasm for tuning I can think of a few reasons off the top of my head why this hasn’t happened. We shot monkeys into space early on in our space exploration program, but I don’t think the folks at NASA would trust those primates to suit up and walk out onto the wing to make a mechanical repair. I’m not equating motocross riders to monkeys, per se, but trying to navigate a track while thinking through setting changes and then taking a hand off the bar to actually turn a knob seems like a big ask. It’s the same reason you can’t play a movie on the navigation screen in your car while you’re driving. I know if my wife put Caddyshack on while I was behind the wheel I’d end up in a ditch or inserted deeply inside the car driving in front of me the instant he hit his brakes. Carl Spackler is just too good NOT to watch. KTM did have compression and rebound adjusters on the top of their 4CS fork, which was convenient. I liked that setup for the simple reason that you didn’t need tools to make a change. Not sure if that feature will make a comeback or not. For now, pull over and make your adjustments.

I write seeking your wisdom on a trend of something other than flat brimmed hats and tucked ears. As a motocrosser who transitioned to road cycling, I am struggling to understand this obsession in the motocross community of riders seemingly seeking body fat levels of Chris Froome. We've watched riders under Aldon Baker's program whittle themselves to twigs and I listened to Alex Ray talk about the rice patty and kale diet that Davi Millsaps is torturing him with. I am all about being fit, lean, and eating healthy as far as both sports go, but I just don't see the benefit of these guys torturing themselves into single digit body fat for motocross. In cycling carrying an extra pound, two, or five up the side of a mountain or just dragging it around for 100 miles can make a significant impact on your performance. I get it. In motocross the 60hp factory 450s aren't struggling to pull these guys through the deepest of sand or up the steepest of hills. You can be at an unreal level of fitness without being rail thin. Why are these guys torturing themselves? Is there any performance/fitness advantage that I am missing or do these guys just love to suffer?

This is something that has had me scratching my head since Ricky Carmichael showed up at the races looking like a really short supermodel at the tail end of a three-month cocaine bender. James Stewart, Ryan Villopoto, Ryan Dungey, and RC were all emaciated during their time with Aldon. I’ve asked this question as recently as last week in an interview with Tyler Kalisiak, a nutrition specialist and the answers are all a little vague. Nobody wants to insult Baker’s program, and the results out of there are tough to argue with. However, I think the question deserves an honest answer. I’ve heard that the heavier an athlete is the more calories (energy) it takes for him to do work. Still, it seems like an endurance athlete, particularly during the Nationals, would need to keep some reserves for the end of very long motos. I’ve always heard that 10 to 12 percent body fat is a good number, but the aforementioned riders looked to be in the single digits, just as you mentioned. I’m working on getting a better answer from Aldon himself. Stay tuned.

Back in 2006 I attended Budds Creek with a buddy of mine from Palm City, Florida who is one of Jason Thomas’ biggest fans. JT had a great day at Budds going 8-6. My friend was out of his mind, running to different corners to hoot and holler and wave his towel at JT every opportunity he had. At the end of the second Moto he ran up to JT to congratulate him on a fantastic ride......"JT, JT, great ride !!! I've got you at 5th Overall!! What a ride, what a ride!!" (I'm laughing my ass off as I write this because of the next sentence). JT gave my buddy the biggest "smuggy" blow off I have ever seen. You would have thought by the look on my friends face that JT just punched his mother in the stomach and farted on her. So, my question........What is proper moto etiquette in this situation? Or is this just simply JT?
I hope to see you compete at the Washougal round of the 125 Dream Race Series.

Things like this happen a lot and there are reasons for it. First of all, fans are able to access motocross riders very easily. Do you think fans can rush up to Tom Brady after a football game and tell him congratulations? No, they can’t. There simply aren’t any other major pro sports like ours in that way. Hell, you can’t get as close to some collegiate athletes as you can moto guys. Also, you have to understand that to go 8-6 at Budds Creek is ridiculously difficult and, although I haven’t asked JT about this, I can assume that he was exhausted when the checkered flag fell in that second moto. I’ve had races where it was all I could do to remain conscious long enough to get to the truck and hose myself down with cool water and recover. So, to that end, the proper etiquette as a fan is to give your favorite rider some time to recover before charging up to him and expecting him to be chummy with you. JT is a great guy and even though he can seem a little serious/grumpy, he always had/has time for fans. He likely had mud in his mouth, eyes, and nose and a mild case of dehydration and heat stress going on when your buddy verbally assaulted him. Twenty minutes after the race most guys will be out signing autographs and shooting selfies with the fans.