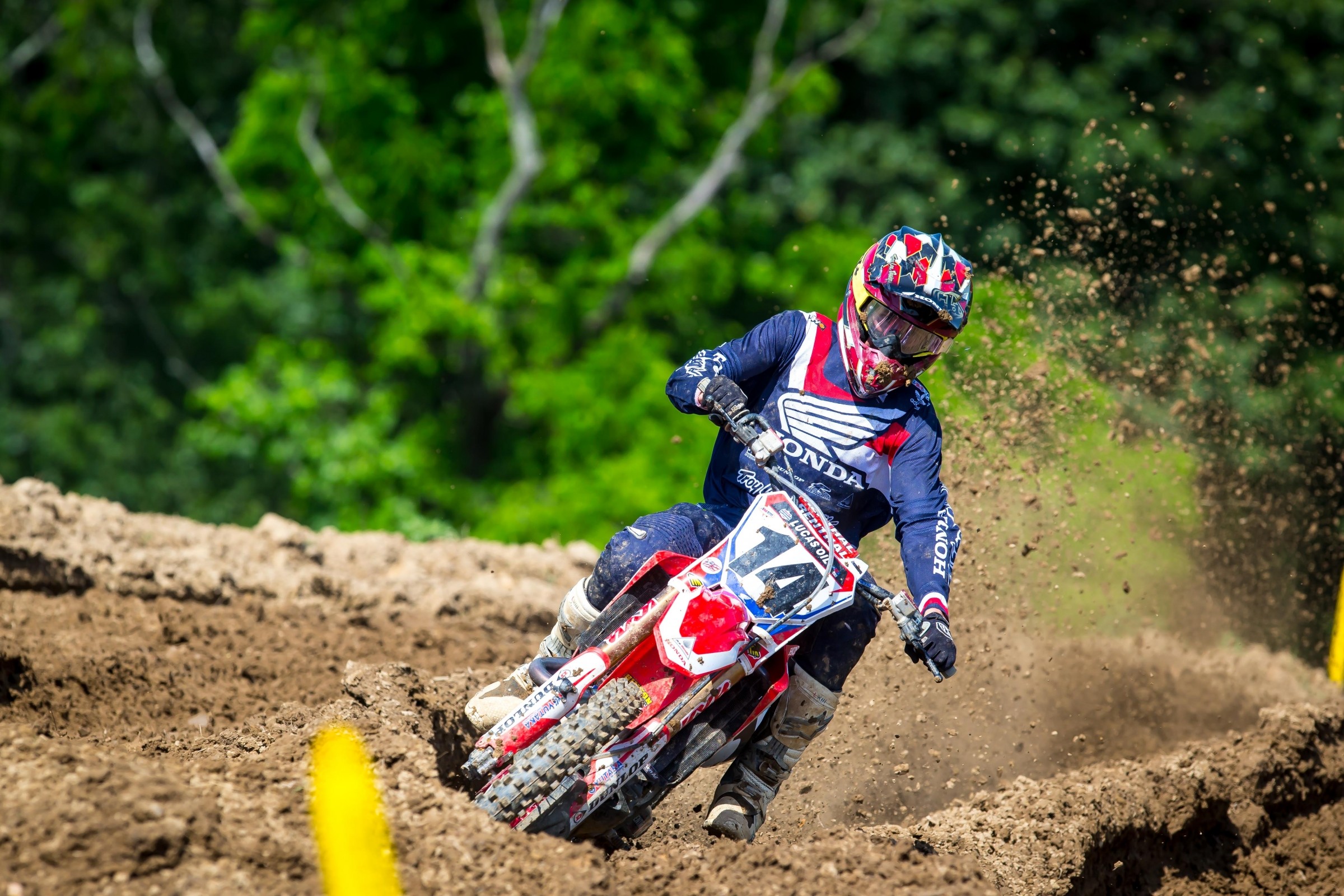 No team entered 2017 with as much hype or expectations than Honda HRC, which trotted out a much anticipated new CRF450R and a big free-agent signee in Ken Roczen. But veteran Red Rider Cole Seely was expected to contend as well. The teammates looked great early, but it all went to hell when Roczen crashed out for the season at Anaheim 2.

Since then, Seely has been good, but generally stuck in the fifth-to-sixth place range. He wants more, so he decided to take the plunge and move to Florida this summer, in hopes of finding a new edge.

We rang him up on Monday evening for a progress report.

Racer X: I feel like you’re stuck in this zone where you’re not doing horribly or having crazy crashes, so no one’s paying attention because of that, but you’re also not winning like you probably want to. You’re kind of in a void where it’s been a good season, but it’s not a season where everybody’s paying attention. How do you feel like it’s gone so far?
Cole Seely: It’s gone okay. Like you said, I’m not absolutely killing. I’d like to be on the podium, but I’m not. I’m right there. I’m not far off, but also I’m not horrible. So, I’m kind of in that range of riders, there’s a lot of us right now. I’m doing everything I can to elevate my game and try and get past that. Same thing with supercross this year. I wanted to be fighting for wins and podiums every weekend. Getting fifth—I don’t even know how many weekends in a row, fifth and sixth—I was getting so frustrated. I’m like, all I want to do is get fourth! Then you almost go backwards when you do that. I’m definitely in that zone but I just moved out here to Florida so that was one step that I took to kind of better myself. Hired a new trainer and just completely switched up my program for the summer but mainly for the future really, just to kind of set up and get a different platform and something that I think is going to work in the long run.

It’s not like the Florida concept is a new one. Had you thought about it before? Why was this the year that you did it?
Like you said, it’s definitely not a new thing to motocross, that’s for sure. I’ve done the California thing my entire career, my entire life. Born and raised in California. I always kind of feared that change of going east, just because it’s so grueling. Every single day is so hot, so humid. It makes it so hard to ride and train and do all this. But at the same time I feel like I needed to put myself through that. Luckily coming out here I have friends and I have people to hang out with and ride with. That makes it 10 times easier to make the move out here. I hang out with Christian [Craig] and Adam [Cianciarulo] and Blake [Savage, trainer] and Chase Sexton and Kenny [Roczen]. So, having that whole crew just made the move a lot easier on me for sure.

Have you gotten to some of the weekends where you’re actually feeling worse because you work so hard in the humidity during the week? Is it like a balance right now?
Kind of. I think the first race that I did at High Point, that was the first race after living there for two weeks, and that one I felt like I struggled a little bit. At the same time, I felt like I had kind of better management over my energy. I was used to riding in the heat and all this stuff. I was definitely a little bit more sluggish, but at the same time there were still positives out of it. Kind of every weekend since then I’ve felt like I’ve gotten better and gotten stronger and it’s working. Obviously, I’m only six weeks into it so I know it’s not going to work right away, but it’s good to see some progress. I just wanted to do something because I’ve been kind of in a rut. I just wanted to have a little bit of improvement and kind of see the light at the end of the tunnel.

I know that you’ve always had better success in supercross, but you had some podiums outdoors last year. It’s not like you just get to the outdoors and you’re like, “Hey, just wait until January.” The last couple of seasons you’ve been trying to make strides outdoors and be as good outdoors as indoors.
People think that I don’t like outdoors. I do like riding outdoors. I had to do it my entire amateur career, so it’s not like I don’t like doing it. It’s just that I naturally am better at supercross. Like you said, I’ve done everything I can to better myself outdoors. It’s been a slow process. Over the past two to three years I feel like I’ve made a lot of progress and still I’m making progress. I kind of enjoy that process. It’s really hard and it’s really stressful, but at the same time it’s a great challenge. I really want to be better at one thing and I set my mind to that and I make goals for myself. I want to be better outdoors, but like I said, I’m just naturally better at supercross.

So we all know nearby, the Aldon Baker program is all about those dudes riding together and chasing each other and pushing each other every day. Is that the same thing you guys are doing where you are? Are you measuring yourself and doing motos with those guys so you have to ride hard every day?
Yeah, exactly. That’s a huge part of Aldon’s program. I don't know what it’s like actually being there, but just like Jason [Anderson] will ride with Zach [Osborne], and those two ride with Marvin [Musquin]. I think that is worth every penny of whatever those guys are paying right there to be able to ride with each other. Obviously, Aldon’s a great trainer. He’s a great nutritionist, cyclist, everything, but that’s huge, being able to ride with fast guys. That’s one thing that I haven’t really been able to do. Obviously, you go to a Southern California track and it’s basically a National sometimes. You get to kind of see what the competition’s like, but you’re not actually doing motos with them and you’re not actually training with them. When I’m out here riding with Christian and with Adam and then sometimes Chase, even if we’re like, “We’re just going to ride at 80 percent today,” there’s not a single moto that goes that way. None of us want to be the slowest guy, so we’re always pushing. We’re always fighting and every single lap is like a sprint lap for me. It’s super high intensity and then also with the heat and the humidity it just kind of elevates. The quality of riding is just second to none out here.

When the season started, Kenny won the first two races and you were right there, too. When he went out at Anaheim 2, you were a podium guy and you were really keeping pace with Dungey and trying to hold Kenny off. When he got hurt, did it take some steam out of the team? Did it even affect you? What was the atmosphere over there over the next couple of weeks?
Obviously, we were all super bummed. Even if it wasn’t my teammate, anybody you see who has crashed that hard, that could happen to any of us. That was a bummer, man. I got some grief for not saying anything in my interviews and stuff after the race, but I was really just trying to digest it all. Also, Kenny and I have become pretty close up to that point. I was more worried about getting in contact with him and making sure he was okay. Definitely the morale kind of got shaken up after that. It wasn’t just our team. You could see it in Dungey. You could see in a lot of riders that it was really eye-opening and scary. It was a tough few weeks after that. It’s hard going to the races alone. I’ve done it for years. Trey [Canard] got hurt a couple times and all that kind of stuff. I hate going there and being the only guy. It’s just something about the atmosphere is kind of lower or the energy or something. Especially with Kenny—he’s such a charismatic, super high-energy guy. He brings a lot of fun to the whole team and the whole atmosphere. So, to have him come in and dominate like he did, it was just fun to have him around. Then to see him go down like that, it was such a big bummer for all of us.

Like you said, you want to do better outdoors, but how much does this work you’re doing now help even for supercross next year, this Florida stuff?
That’s mainly why I moved down here. What I was doing worked for a little while but it kind of fizzled out, so I wanted to switch up my program and just kind of look at my options. I wanted to not only better myself this summer, but more thinking about next year, supercross and outdoors, and really just have the whole summer to adapt to the program, make sure I like it, and make sure that Florida was the right choice for me.

You said you have a new trainer. Is that Blake Savage?
Yeah, he’s my main guy. He’s kind of working hand-in-hand with Peter Park, who works with Kenny and Adam. We all train together. It’s a really cool environment having us all there and really pushing each other in motos, pushing each other in training, on the bicycle, whatever it may be. It’s a really good group of kids. We have a lot of fun in the process. That always makes the job a lot easier when you can enjoy the people that you’re around.

How is the team perspective? Obviously, they rolled out this new bike and there was all this hype and obviously they didn’t get the wins that they were hoping to get.? How’s everybody dealing this year?
Pretty good. It’s tough with a new bike. You’re constantly searching for a direction to even go in. My team’s actually out here right now helping me find good settings for the races and finding new direction to try. Whether that’s linkages or different suspension settings or whatever, we’ve got to run through so many different things with the new chassis. I do my best to stick around after the races and kind of really just dig deep with my thought process, what I felt and how to make the bike better for myself, for Christian and also for Kenny when he comes back. I’m testing as much as I can and trying to just get as much information as I can to make this thing better. It’s a really good platform, but I’ve been struggling with a direction to go in. We’ve been making a lot of progress and I think it’s going to be a lot easier. Then it will be smooth sailing once we find that.