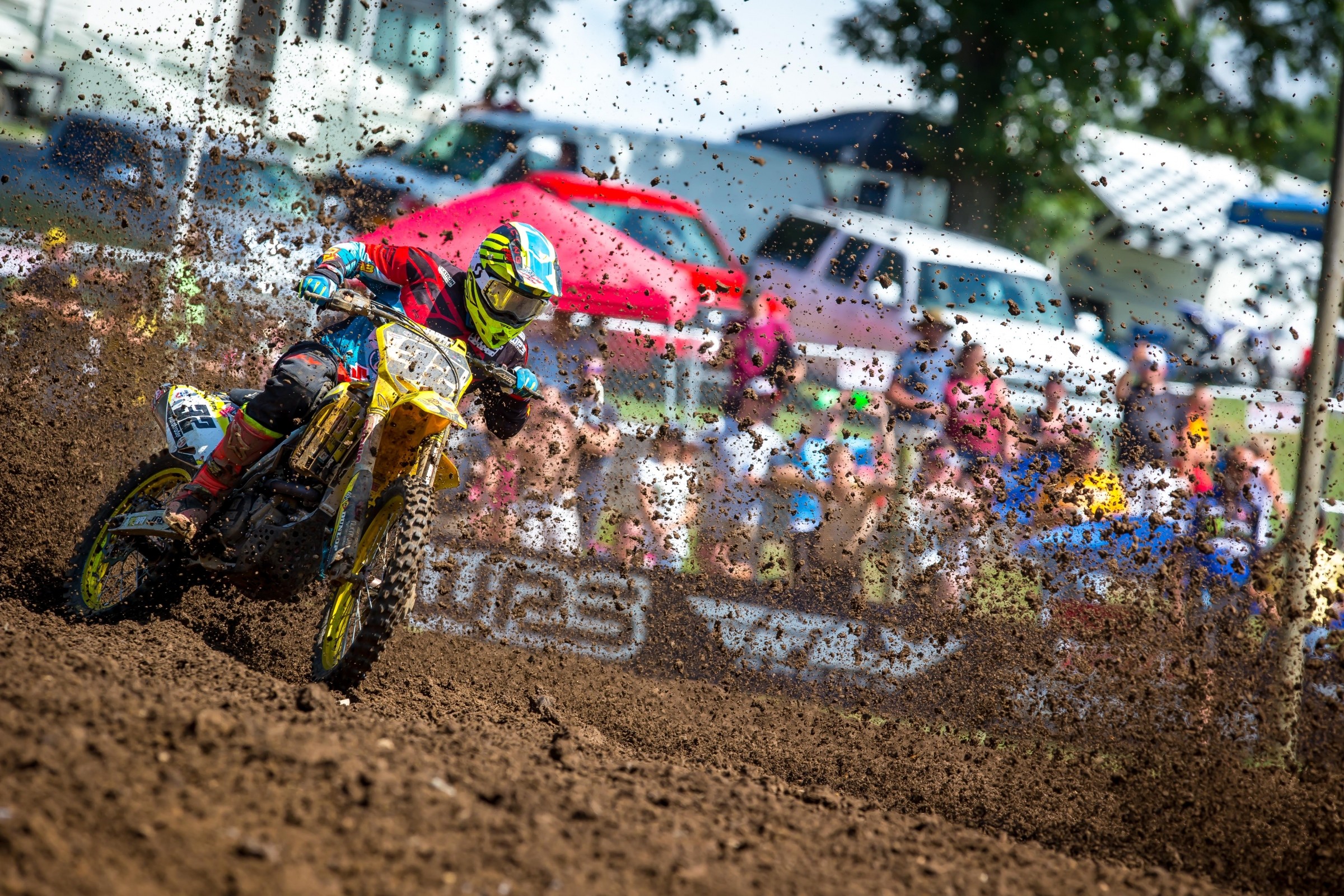 Racer X: Four-four. You must be happy with that.
Weston Peick: Yeah, it was definitely a lot better weekend for me. Going 4-4 after last weekend. The first moto and second moto [last week] I crashed and jammed my wrist and wasn’t able to finish. But I came into this weekend, I’ve been in North Carolina for the last two weeks doing a lot of testing and developing with the bike and stuff. We’ve made huge progress with the motor and suspension. I couldn’t be happier with the team. They did a lot for me this week and it definitely paid off on the starts and on the track as well. Four-four is good. It’s close to the podium.

You were charging through the pack too. You were running third for a long time until [Blake] Baggett got you right at the end.
I was able to get by a couple guys at the beginning of that second moto. Then I see Baggett coming and he’s been on fire. He’s been riding really good. You expect that from somebody that’s 100 percent. I’m getting there. Hopefully the next couple weeks I can start being able to push a little harder.

Where would you say you’re at with your wrist right now, percentage-wise?
The problem with me is about 20 minutes in my hand starts going numb, my fingers start going numb. So, it’s hard to hold on and it’s hard to race that pace when it’s something like that. Really there’s no telling when it’s going to be 100 percent, but it’s getting there slowly. It gets better, but it doesn’t—it’s one of those things where it’s not going to be 100 percent until I take some time off.

What did you think about the track today?
Overall I was happy with the track. With the rain we got last night and this morning, they actually did a really good job with getting the track prepared and ready to go. So, I was overall happy with that.

Racer X: Walk me through your day.
Justin Barcia: I was unsure if I was going to race or not. I had a little concussion last weekend, so I kind of went through the tests and stuff and passed them but just wasn’t feeling that good. Tried to ride Thursday and didn’t feel good at all. I was like, I’ll just fly up, do my dealer signing and see how I feel in practice and stuff and qualified second. So I was happy with that. It heated up a bit today. First moto got the holeshot and rode pretty good. Didn’t feel great. I actually got a flat tire probably lap three or four and rode with a flat the whole race. So I think to get a top five with a front flat tire is pretty good. I was happy with that. I felt really not good after the first moto and was worried about the second moto. Kind of chilled a little. I just don’t feel good. It is what it is. I’ll be better next week for sure. Just not feeling that great this weekend. Just kind of sick a little bit. Definitely be a lot better. Second moto was all right. Just obviously wasn’t feeling good and rode as good as I could and I don’t even know what I ended up with. It was okay.

Overall how do you feel about the day?
Overall, for not planning on really racing, coming to race and doing pretty good, decent anyway. It was overall pretty good.

How bad was your concussion?
It was mild, but everyone reacts different to concussions. For me, I had some seeing issues and stuff like that for a couple days. But I worked on it at home. There’s some great guys at TOC and I’ve been working with the MTF guys. There’s some good eye doctors and stuff in Tallahassee, so I did a lot of therapy and stuff during the week and was able to come race this weekend, which was nice. Passed a lot of tests and got checked out by the Alpinestars guys today and was all good.

What ended up happening with your crash? Do you remember?
Yeah, I didn’t get knocked out or anything. Just kind of hacked up my front with some mud and actually landed on some rocks or something and that’s what kind of rattled my head. Kind of came to a complete stop. If it was just falling in the mud, I’d have been fine, but I probably hit the only place on the track where there was a couple rocks.

Broc Tickle: Today, I would say it’s okay. I rode decent. My times were good both motos. First moto just kind of started out I think tenth. Made some passes, got into seventh. Kind of stayed there. Marvin [Musquin] passed me, and then Barcia and him got into it. Then I passed Marvin in the last corner. Second moto I crashed in the first turn. Was way back, I think ten seconds off the last guy before I even crossed the finish line, so that was a lot of work for me. But I ended up twelfth. I don’t really know what place I got overall, but I would say second moto it was pretty solid.

Tenth overall.
Tenth overall on the day, obviously not where I want to be, but stoked on it.

You must be happy with the way you came back in the second moto. That first-turn pileup you connected with Baggett. Talk about that.
We all got in there, locked kind of together and then we had nowhere to go. We all stopped and everybody fell over on top of basically.

Are you all right?
Yeah, everything’s good. So, looking forward to RedBud, Southwick, and then we have a break. These next two, just good starts and trying to go for podiums.