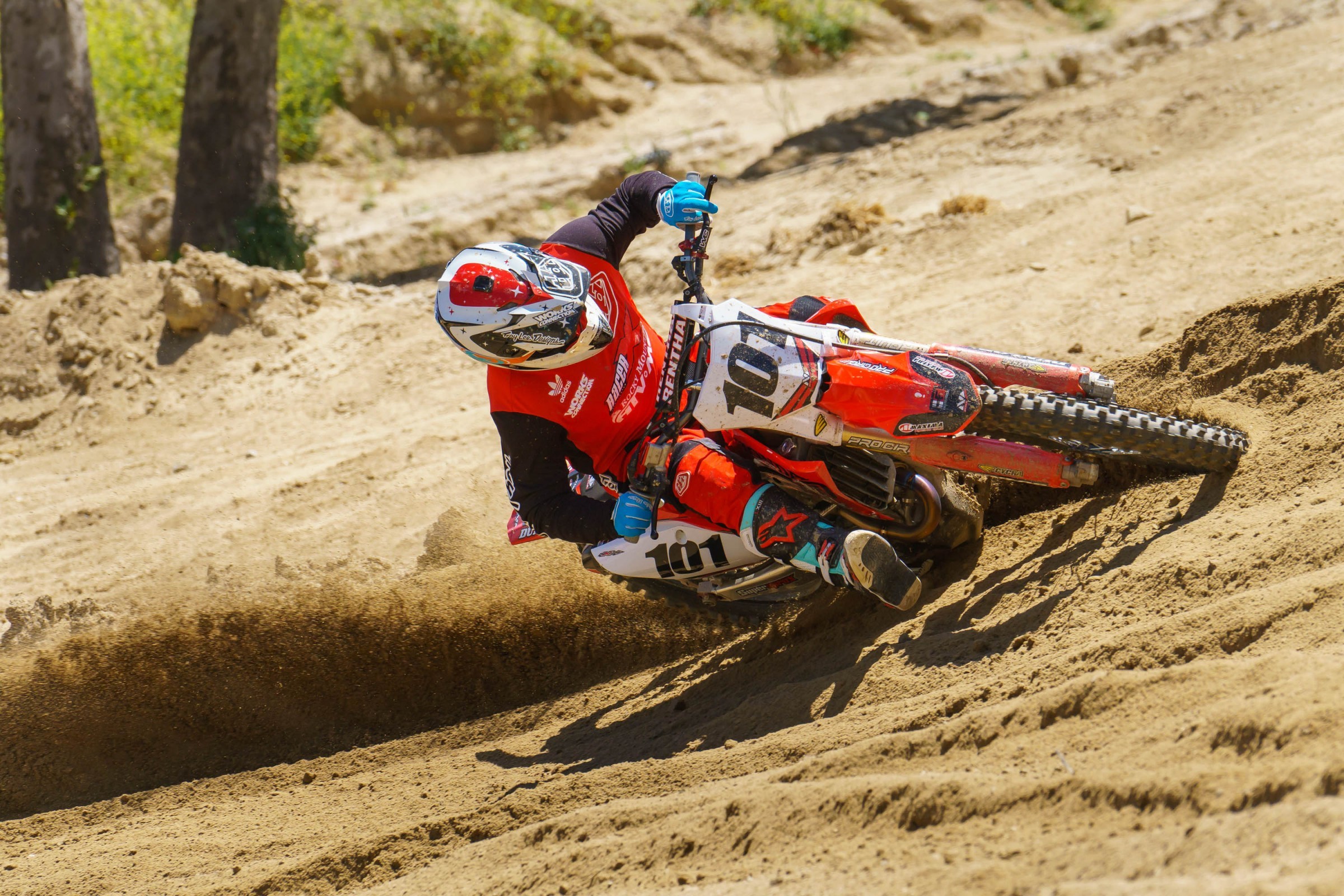 I need your help with a situation I have just found myself in. We were at our "local" track this past holiday weekend for practice, a place where the big bikes and minis are never separated; which, by the way, I have voiced my concerns about. Although the track was not very crowded, my intuition told me that I should put on my helmet, hop on my pit bike and ride cover behind my son on his 50. Three turns after getting behind him, some goon on a big bike doubled onto a triple section and clobbered into me rolling the double, compounding my tib/fib on my left leg. Better me than the kid, for sure. But here in lies my dilemma... How should I feel about this? Should I just man the f#$@ up and be the hero dad that saved his kid from some donkey unaware that he is on a track with little guys who are not jumping all the jumps? Or, do I blame someone and get all pissy about my accruing medical bills and the fact that I cannot do my job, which is compounding my financial situation? If so, does that make me a snowflake? Who do I blame? I have never faced a situation like this and am a bit confused on how to feel.

That’s a really ugly situation all around, man. I’ll try to give you some perspective from the outside looking in but, depending on your pain medicine dosage, you might not like it. The silver lining is that your son isn’t hurt. A 450 does a lot more damage to a nine-year-old than it does to an adult and the outcome could be substantially worse. Aside from that, here are some thoughts you can take or leave. First of all, you knew ahead of time that this track doesn’t separate minis from big bikes. That is an ignorant policy that has gotten kids killed in the past, but it wasn’t a surprise to you. Second, you knew the risks of this sport when you sent your son out on the track. We all know the risks and the things that can go wrong and we sign that liability waiver anyway because we love the sport. Third, you shouldn’t have been on the track without boots on. I don’t care if it was a mini bike, a pair of Tech 10s would have lessened the injury, no doubt. It sucks that Mr. Donkey jumped into the back of you like Seth Enslow in the Glamis Dunes after 15 Jack and Cokes and your injuries are keeping you out of work. I get that. But, as a non-snowflake you need to own the consequences of your actions and move on. I hope you heal up quickly, brother.

So, I was just reading the press release on the new YZ450F.  I’ve got to say, it looks pretty sweet and has some great new technology (Electric Start, Mapping done by Smart Phones, couple pounds lighter and much slimmer). However, all that comes with a huge increase in cost. Last year they were priced at $8699 and this year $9199 MSRP! Holy! It gives me heartburn seeing a ‘9’ in front of the price of several of the 450s now, which will soon be ‘10’ in a couple years. With a 12 year-old racing right now I don’t see him ever getting a brand new 450 without going into serious debt. So, with that, my question: What will it take for the OEMs to finally price themselves completely out of the average guy market?? I would think they have to be getting close. Or I am I just a two-stroke Lovin’ redneck that is stuck in the 90s thinking we should only be paying $5999 for a brand new 450 dirt bike???

I can’t deny that you may be a two-stroke lovin’ hillbilly, but that’s because I know you are a fellow Montanan. A couple years ago Honda said they were going to do their best to stop increasing the price of their bike. They felt like if they breached the $9,000 mark they were moving out of the price range of the average consumer. Perhaps that is what kept them from adding the e-start and hydraulic clutch back then? Either way, my eyes widen when I see the price tag on some of these bikes. The Factory Edition KTM is over $10,000! I think we are already at a point where the folks that used to race motocross a couple decades ago wouldn’t be able to afford it now. Ricky Carmichael’s dad was an honest, hard-working, beer-drinking, blue collar guy and they scraped and scrimped to get to the races back then. Jeremy McGrath’s dad was an auto mechanic and they still bought Jeremy bikes and went racing. James Stewart’s family did the same thing. If those families had to make a go of it now I don’t know if three of the biggest stars of the sport would have pursued motocross. Yes, inflation raises the cost of everything and we have better technology now. But I don’t think the racing is any better because of the improvements to the bikes. I’d rather see technology slow down and the cost of bikes shrink or at least plateau. If that doesn’t happen you are going to be forced to get little Jason Jr. into football or basketball or 4-H instead of riding dirt bikes. Wait, didn’t you tell me there was a big two-stroke race coming up in Helena? Maybe that’s your answer to affordable racing. Good luck.

What's your take on the current trend of MX stars getting married and even having kids while still in the prime of their MX careers? How do they focus on the job at hand while still trying to be a good husband? Does being married extend their careers, or shorten it? Back in the day nobody got married until they were out to pasture. Guys like Hannah, Decoster, Ward, Johnson, Bailey, McGrath, etc, etc. Would #7 still be racing if he didn't get hitched? How about Dungey? The weight of a wife & family weighs heavy on many.

I know, so many questions so little time

I don’t understand it at all. The 1990s were a good time to be single on the professional motocross tour. To quote Lloyd Christmas, the races were a place where “Women instinctively flocked like the salmon of Capistrano.” When I got married it immediately changed my perspective on things. I knew I wanted a family and I couldn’t be flying around the world and be a good dad at the same time. It was a shift in my thinking and it didn’t help my results.  These days, most riders are married. Their wives are basically unpaid assistants at the races, typically handling their social media beefs and making sandwiches. If they have kids they are regular figures at the track. In Christian Craig’s case he actually increases his TV time by holding his son Jagger on the podium like he’s a can of really cute Red Bull. It’s just a different time. On one hand I can see where it would be helpful to have a wife with you at the races and traveling with you every weekend. On the other hand, nah. I liked my racing when it was less boogered with man-friends and significant others.

As far as James Stewart goes, I think having a kid and getting married are the least of his issues when it comes to being competitive. He showed up to his last comeback looking like he lost his running shoes and found a Krispy Kreme close to his house. His concussions and love handles are his biggest hurdles right now. Plus, what does he have to prove at this point? It’s a different time, my friend. The good news is that riders who decide to stay single while they race have the girls in the pits to themselves. Finding some company on a Saturday night after the races now is like fishing with dynamite. Those are smart guys.