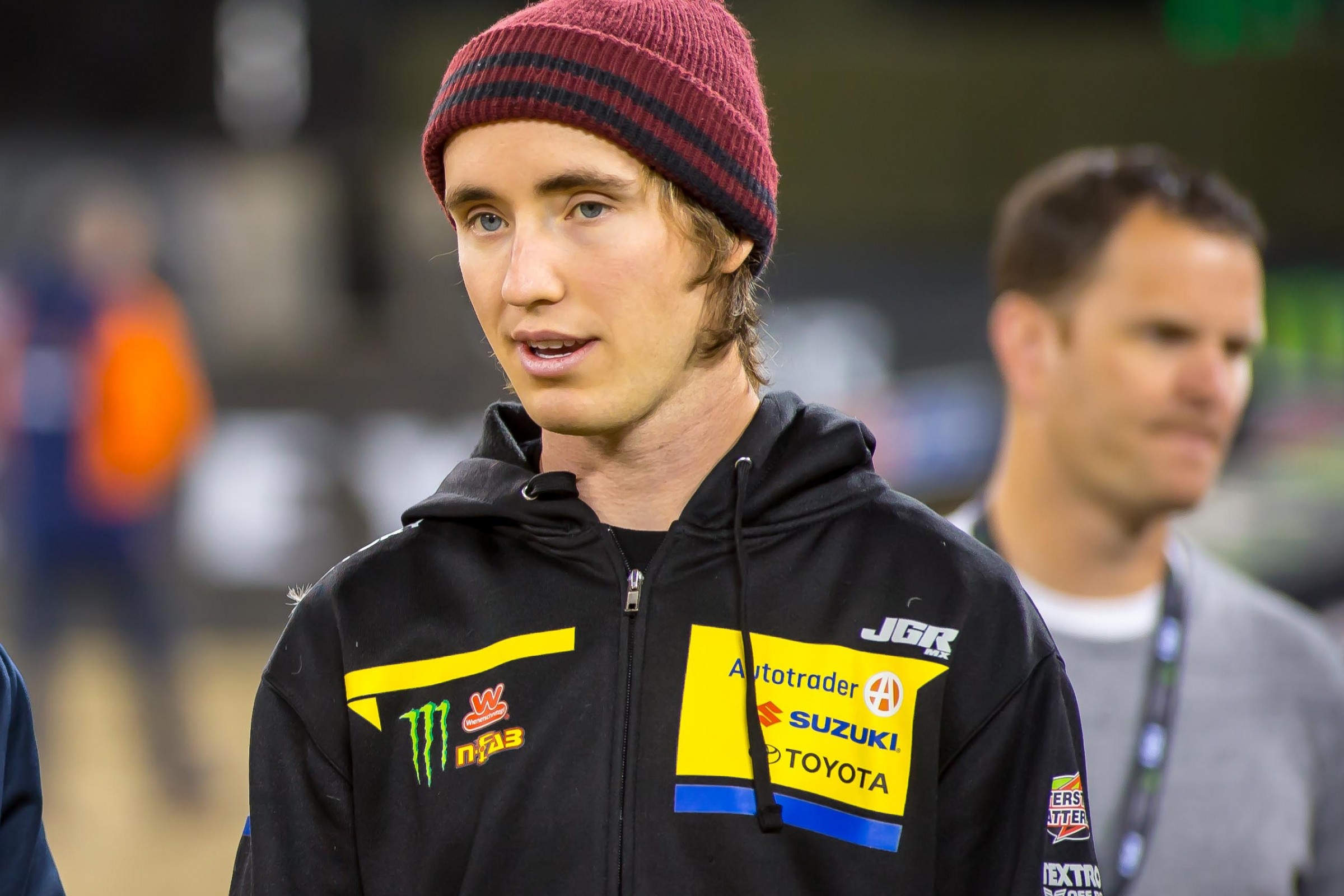 250 Words An American in Australia

While visiting the AutoTrader.com/JGR Suzuki shop last week, we spotted Kyle Peters, who filled in for the team for a few 250SX East Region races earlier this year, before heading off to a Wilson Coolair Motul Factory Suzuki deal down in Australia. Peters is currently ranked sixth in the MX1 Class, with hopes of continued gains, and eventually, another shot here in the U.S. With current 250MX stars like Alex Martin and Zach Osborne proving there’s a place for late bloomers, Peters believes his best days are yet to come.

But what are his current days like? What’s it like to ride, train, test, and even eat Down Under? We asked to find out.

Racer X: Why are you even here?
Kyle Peters: We have a five-week break in the series, so I came here to see some people, visit some family, get some riding in.

You have a bike at home?
Before the season started Suzuki of America sent me a bike, helping me out. So I had that so I can keep on training.

How’s it going down there?
It’s going good down there, riding-wise, but we’ve had a few issues we’re just trying to work through before we can get the results we want. Been a bit of a tough year as far as the results, but the speed has been there, fitness is there.

What kind of adjustment has this been, lifestyle wise?
I’ve been there a couple of times so I was kind of used to it, but yeah, the lifestyle down there is just totally different. Food is different, everything is different—it’s crazy. The tracks are the biggest thing, the way everything is run, they way they maintain them, how rough they get, and really just the type of rough that they get. Everything has been an adjustment, so that’s been crazy, but we’re getting better day in and day out.

Let’s talk about the differences in tracks. For example, we know what type of equipment we normally see at a big American motocross track. Does the construction equipment over there even look the same?
It does, it’s just they don’t always have a lot of it! One round we went to, it rained Thursday night, and we got there Sunday and it was still muddy. They didn’t have anything to scrape the mud off. It’s a little bit different then here. The series promoter doesn’t prep the track, it’s up to the individual club to do it. So whatever the track has, that’s what it has. That means every track is prepped different and turns out different. It’s definitely a big adjustment.

Obviously you’d love to just go over there and dominate and win. But for you, is there an element where you’re learning from these bizarre conditions, and maybe becoming more well rounded?
Definitely. You don’t get tracks prepped during the week over there; you just ride what you can ride. I think it helps to be good in every condition, but at the same time … it’s hard.

Right! Plus, you told me you’ve had a few mud races. It’s wintertime down there right now.
Yeah it’s their wintertime, so I think all of those mud races are pretty normal, I think. Just another curve ball, have to adapt and learn as I go.

Now, most people hear that you’re living in Australia and it just seems like so much fun. Is it?
Yeah, the racing is always very serious when you’re at this level, but compared to here it’s super chilled out, everyone is just hanging out and having fun. The Australians, they love to party!

You have to stay away from all that.
Yeah, I’m there to do a job, but that’s not me anyways. I’d rather go home and watch a movie.

You mentioned the food. Maybe it’s because everyone in Australia speaks English, no one thinks the food would be that strange. We hear all about how hard it is to find the food Americans are used to in Europe, but you don’t hear that about Australia. But you’re saying it is quite different? We also have Outback Steakhouse here!
Yeah it’s not like that at all! They only have a few restaurants around; it’s not like here where you can always find a restaurant. Most of the stuff you do find is more home grown, organic and healthy, but it’s just harder to get places. They don’t have nearly as many grocery stores.

Would you consider yourself in the country?
Yeah, the town where we’re staying doesn’t even have a gas station. You have to go to the next town over to go to a gas station.

What kind of living arrangements do you have?
I actually stay with Kevin Williams and Jay Williams who run the series. That helps out a lot, being around people I know and can trust. They’ve helped me find tracks to ride, because most of the tracks are private. There are maybe two or three public tracks around, maybe two hours away, but they’re mostly only open on weekends.

You know what it’s like to be able to ride in a very controlled environment, you did your work at Club MX and before that at MTF [Millsaps Training Facility]. So are you at all able to replicate what you’ve done at home? The amount of riding and training, the food, all of that?
Somewhat, but it’s definitely hard. You get up, you do your warmup and bike work, you have to drive an hour and a half to two hours to get to a track….

But you can always find a track?
Yes, but it’s most likely not going to be prepped. So whatever it is is whatever it is, and that can hinder your riding because you can’t always do sections or sprints or drills of anything like that. Then the gym, if you want to go there, is really far, too, so it’s a lot of driving. Turns into a big day when you add three to four hours of driving.

Do they have regular gyms?
They do, but they’re not nearly as big as what we have here. [Laughs] They’re okay.

What I’m getting at here is, Ryan Villopoto went to the GPs at the highest-level possible—he was a highly salaried guy on a factory team. Even with that, people said he wasn’t the same guy due to all of the changes in lifestyle. So, do you feel like you’re representing yourself exactly at your best, or is it like 90 percent just because of the program changes?
I think, riding wise, I’m okay. I have to get it done at this point, it’s a job and that’s what you do. There’s no trying to get it done, you have to get it done and you do. Some circumstances with the team have been hindering things, but we’re working on it, working on the bike, trying to make it better.

So I’m sure the dream is to race in the U.S and have a ride. But when I talk to riders in your position—even privateers over here—they’re usually still happy, because they still get to ride a dirt bike for a living, even if it’s not the exact situation they dreamed of coming through the ranks. So where are you at with all this? Do you feel bad for yourself? Are you happy?
Obviously, I would love to race full-time in the United States. But no, this is good. I get to learn new stuff and see new stuff. It’s been hard getting to know the tracks and things like that, but as far as my career, I’m still 100 percent committed and focused on it. I love the riding and training as much as ever. I feel like with the right team and people around me, I could contend for championships there or here. Definitely, the goal is to someday come back here and be fighting for podiums and wins and championships, I think I’m capable of it. I feel like I keep getting better. I started slow in my rookie season, it took a while to get it together, some injuries and stuff, but I feel good now and I feel like the next few years are going to be my breakout.

You know guys like Alex Martin and Zach Osborne, you rode with them at Club MX. Those guys had to go to the depths to rescue their careers, and now they routinely win motos and we don’t even bat an eye at it anymore. Does that provide a little inspiration for you?
That definitely does, especially being friends with those guys, too. It’s cool to see where they were, and where they are now. You see that hard work wins out every time. So that’s where I’m at—just keep putting in the work and keep pushing.