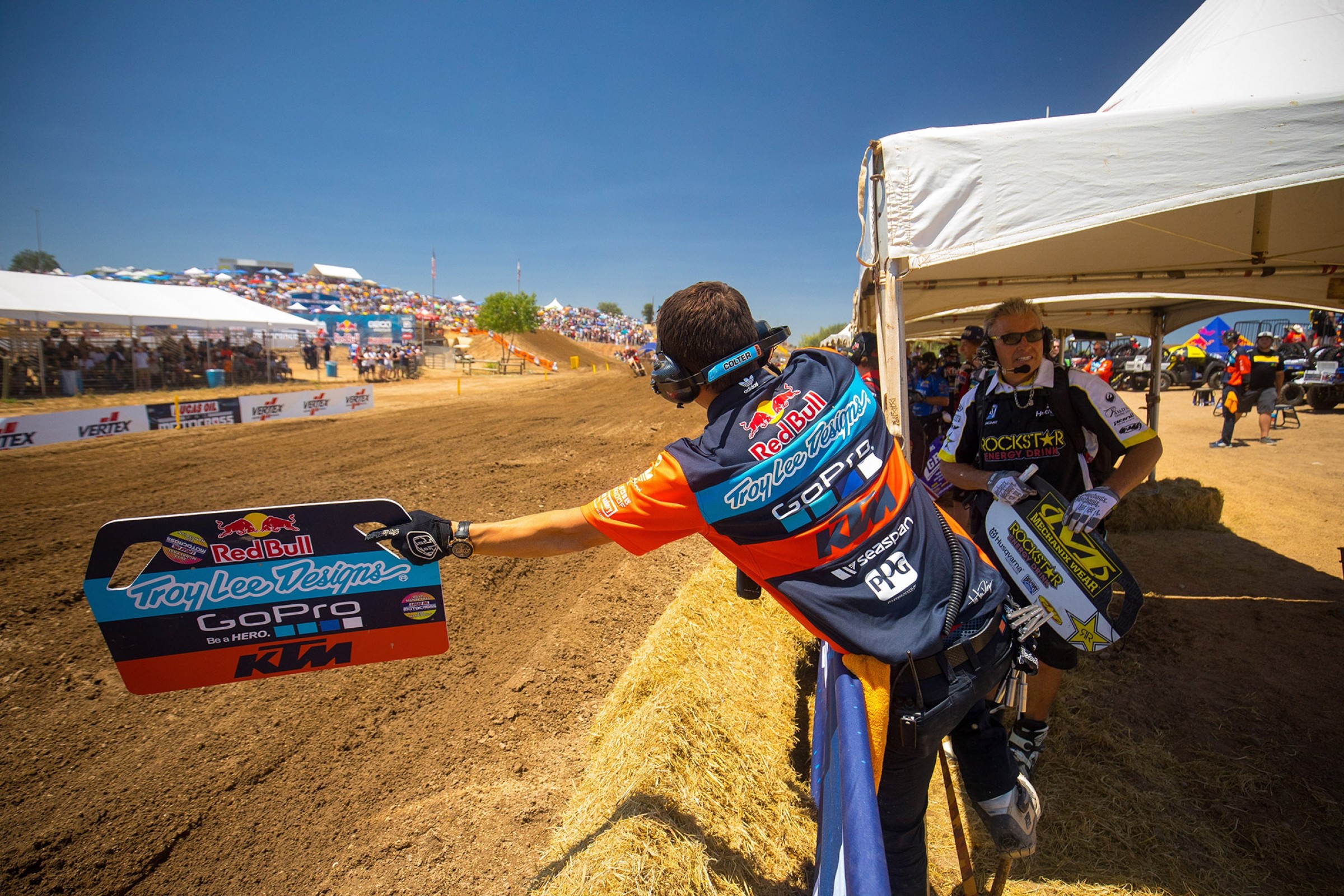 The Nationals are back! After a riveting supercross season we are back outdoors and the series started at an incredibly rough Hangtown track. The track is already known to get choppy on the many downhills, but some extra water and prep leading up to the race created even larger bumps and more ruts.

The conditions didn't seem to phase Eli Tomac and Zach Osborne, though, who both came race ready and rode to 1-1 finishes to strike first in the Lucas Oil Pro Motocross Championship.

There might have been some concern among the Tomac faithfuls about halfway through the second 450 moto, as it seemed like he wasn't able to move through the pack as quickly and easily as he did in the first moto. He got caught behind Dean Wilson who was riding well and later on in the race it took him a couple laps to get around Marvin Musquin for the lead.

Tomac's lap times were pretty up and down as he worked his way up to Musquin, but the key laps to look at here are 13 and 14. Those were the next two laps after Tomac got into the lead and you can see he was able to drop the hammer and put a nice gap in between himself and Musquin. Meanwhile, Musquin and Josh Grant continued to drop off their pace from earlier in the moto

There was lots of talk after the race about how rough the track got throughout the day. Cole Seely even said this after the race, "Yeah and if you look at the track right now, it’s just absolutely insane that we can make it around right now. It’s almost like there are cheater lines off the side because there are no more good lines, there’s no more room for good lines."

The extra rough track caught many off guard because last year we saw a version of Hangtown that was smoother than normal. In 2016, the track crew was expecting rain leading into the event, so they cut back on the usual digging and watering. But the rain never came, so the track never got that rough. This year, it sure did. I decided to do a side-by-side of the first laps of both years so you can see the difference in the track conditions and speed the riders were able to carry through the corners. The tracks aren't identical in layout so don't pay too much attention to gap at the finish line between the two years.

Osborne may have gone 1-1 at Hangtown and made it look easy, but don't hand him the title just yet. I went through the vault to see how often the overall winner at the first round went on to win the title in the 125/MX Lites/250 Class, and it doesn't happen as often as you would think.

Since 2000, the winner of the first round has gone on to win the championship just six out of 17 times. That's only 35 percent.

Lastly, if you listened to our Fly Racing Racer X Review Podcast on Monday you probably heard Steve Matthes mention that in the first moto Austin Forkner cut a large portion of the track to get back to the mechanics' area to fix an electrical problem and wasn't penalized after the race. It caused quite a stir up in our comments section as it appears to be a continuation of the inconsistent penalties that were handed out during supercross.

I talked to Jeff Canfield, Race Director of MX Sports, to get some clarification on the lack of a penalty and he said that they decided to hold Forkner in the mechanics' area until all the riders had a chance to pass, instead of handing out a penalty after the race. So you can all lower your pitchforks for a little bit.

Below I've colored in the track map to represent Forkner's first lap. The area he rode is marked in green and the area he cut (to get into the mechanics' area) is marked in red. After timing Osborne for a few laps I've worked out that the amount of time Forkner cut off of the track is somewhere around a minute. After finishing the first lap in second to last place, Forkner eventually made it all the way up to 11th place by the finish.