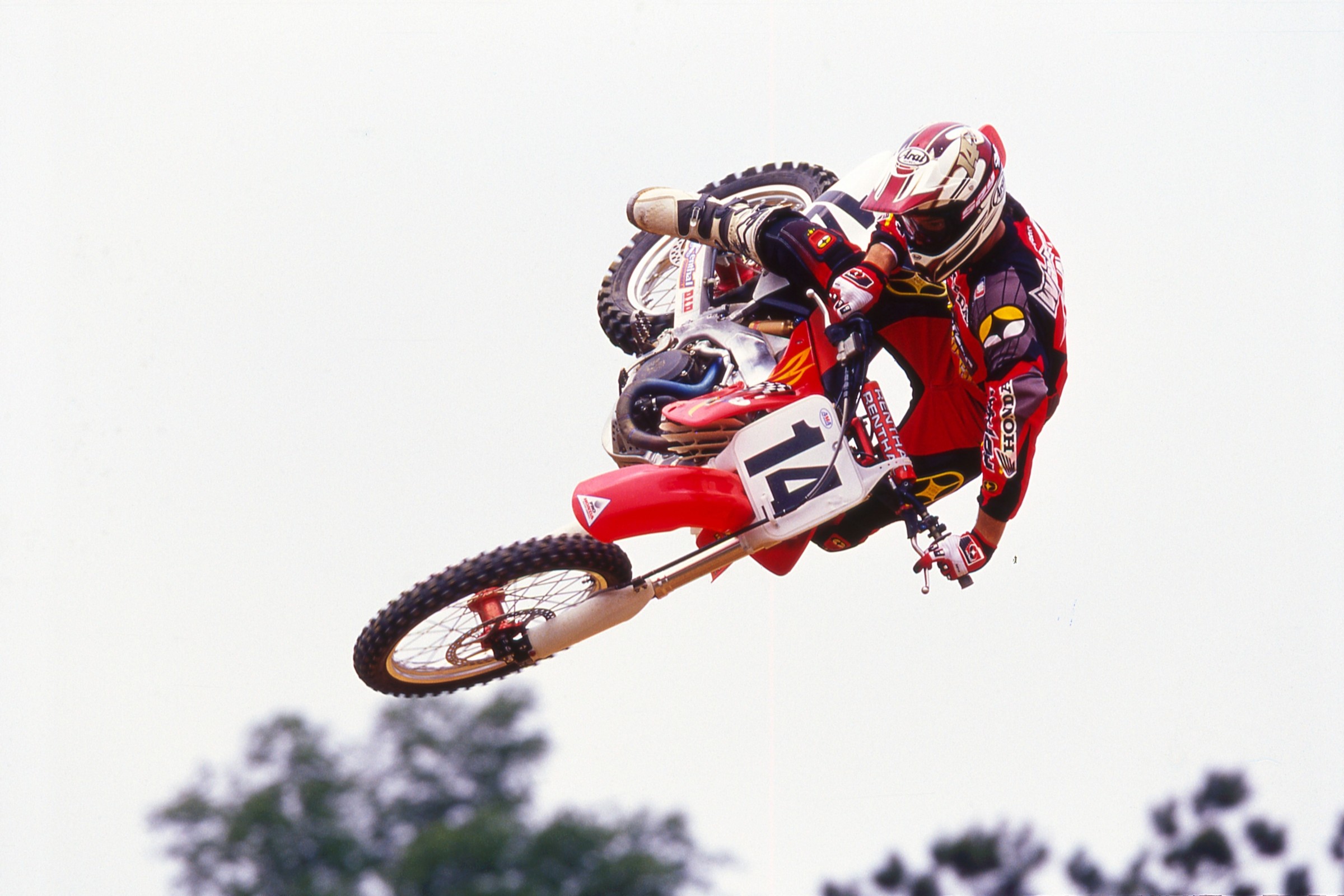 We're counting down the days to the start of the 2017 Lucas Oil Pro Motocross opener at Hangtown on May 20, with a look back at some of the most memorable motos in AMA Motocross history. This summer, you can watch all 24 motos on all of your devices on NBC Sports Gold. Today, we're looking at the day that RC's streak ended.

There are a few mainstream sports records that most everyone knows about. Joe DiMaggio’s 56 game hit streak, or Cal Ripken’s 2,632 consecutive games played streak, or the record 51 straight games Wayne Gretzky scored a point in, come to mind.

Heading into the 2003 AMA Motocross Championship, Honda’s Ricky Carmichael had won an astounding 28 straight motos and 14 overalls in the MX Class (450). His last loss came at Washougal in 2001 when then-Suzuki’s Kevin Windham swept both the motos. In 2002, RC won every race—and moto—for the first perfect season in AMA history and entered 2003 as the heavy favorite.

The wins were piling up and so was the pressure to keep the streak going, although Carmichael himself said a few times that a loss was coming at some point. He said he didn’t feel pressure because the title was what he was looking for, not to continue the streak.

Since beating Carmichael that day at Washougal, Windham’s career slowly went south, a supercross crash in Atlanta that resulted in a broken femur combined with off-track issues left him and many others unsure if he would ever race again. Windham took the rest of 2002 off and his Suzuki deal expired leaving him without a ride for 2003.

Windham also took the 2003 supercross season off before getting the itch to race again. With the help of Factory Connection Honda, and Jeff Surwall at No Fear, Windham lined up for the opening round of the AMA Motocross Championship at Glen Helen for the first time in over a year and on the still-new Honda CRF450R machine.

Windham briefly led Carmichael around at the opening round before crashing, but right off the bat you could see that the old Windham was back. His smooth style worked well with the four-stroke, and it allowed Windham to relax and let the motor work for him.

Carmichael’s moto streak would fall the next week at Hangtown when he lost to Windham in the first moto (remember, his last moto loss also came to Windham), but the overall again went to the #4 Honda rider. Carmichael would lose another moto to Yamaha’s Tim Ferry at Budds Creek (great day!), but the overall streak continued on that summer to reach 20 straight when the series headed to Unadilla in New York.

On a slippery track that favored the tractability of the thumper, Windham got the holeshot in moto one and took advantage of Carmichael rounding the first turn in eighth. Eventually Windham won by a huge margin, but Carmichael made it up to second, so the overall streak was still looking very real.

And really, when Windham holeshot the second moto with the #4 Honda right behind him, most people thought that Carmichael would get it done. But a funny thing happened on the way to overall win 21 and that was the #14 riding one of the best races of his career.

With immense pressure from Carmichael throughout the moto, Windham used inside lines, outside lines, and the power of the CRF to thwart RC’s advances at every turn. The two Honda riders were checked out from the rest of the field with Ferry riding a lonely third. It was a show of force from the two red riders up and down the hills of Unadilla with the crowd seemingly on Windham’s side, as they knew they were witnessing history if Carmichael couldn’t pull this off.

Four seconds was the margin of victory for Windham for his first overall in two years, which was also Carmichael’s last overall loss. The circle was complete for Windham. As for the end of the streak? Carmichael took the overall loss in stride after the race.

“Everything’s good,” Carmichael told Cycle News. “Of course I’m disappointed that I didn’t win, but as far as the streak goes, everyone knows you can’t win forever. We’re out here to do one thing and that’s to try and win a championship. If we win races that’s great but everybody remembers championships, not so much race wins.”

What a day for Windham and for the motocross history books. Windham would go on to re-start a successful second act and be a title contender for years, and Carmichael, well, he clinched another MX title and then started a new streak of moto wins that reached 31 before being broken by Yamaha’s Chad Reed at Southwick in 2005 after Carmichael fell.

But that second moto at Unadilla, where two riders pushed themselves to the edge, that was something no one will forget.