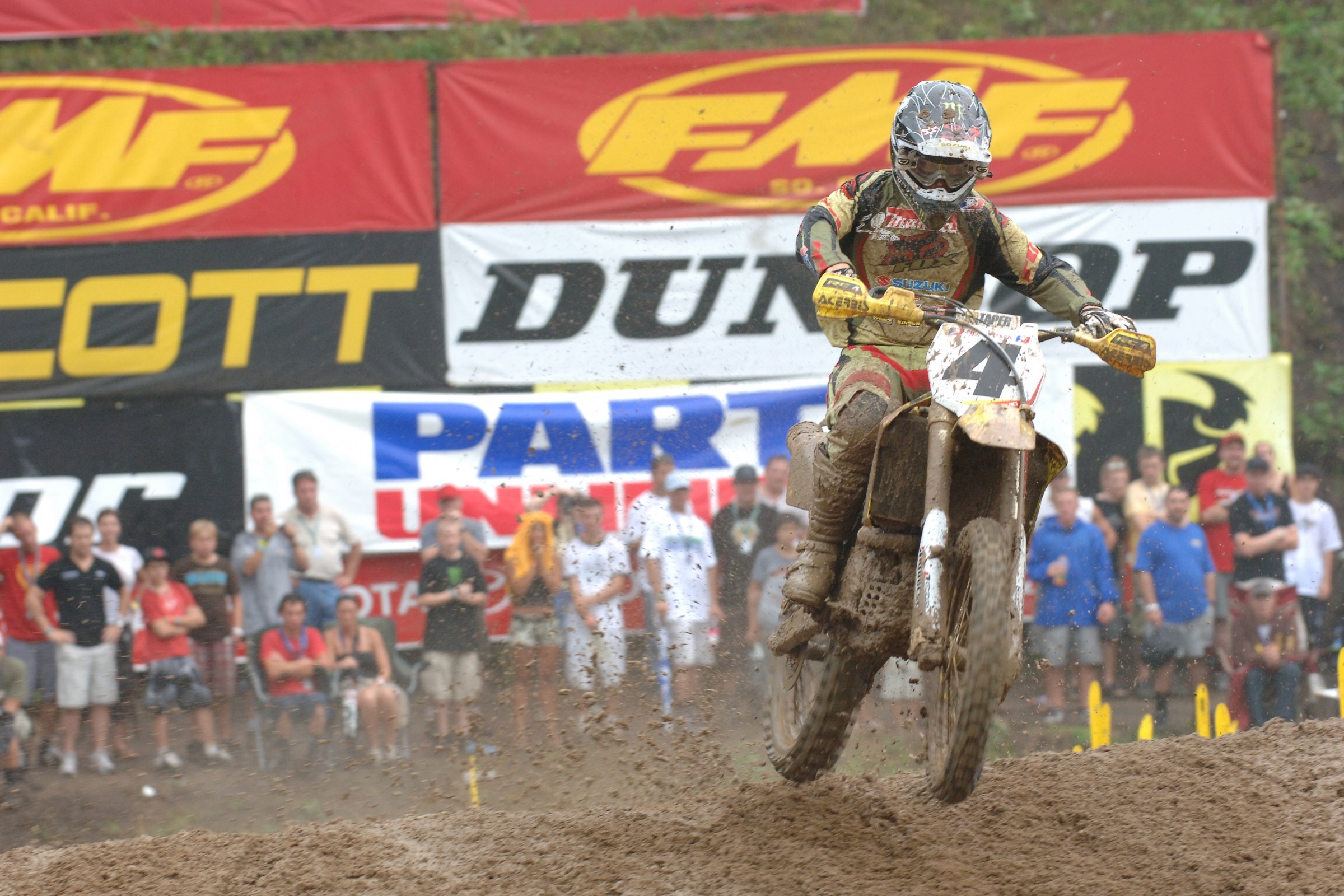 We're counting down the days to the start of the 2017 Lucas Oil Pro Motocross opener at Hangtown on May 20, with a look back at some of the most memorable motos in AMA Motocross history. This summer, you can watch all 24 motos on all of your devices on NBC Sports Gold. Today, we're looking at a race that all other units of domination are measured up against. The day RC lapped the field!

The 2006 AMA National Motocross Championship was billed as a clash of the titans, part two, with Ricky Carmichael and James Stewart hooking it up on 450s. A year earlier, Ricky versus Bubba was hyped to a fever pitch, but Kawasaki didn’t have a 450 four-stroke, and the world quickly found out Stewart’s old KX250 two-stroke was no match for Carmichael’s Suzuki RM-Z450. When Stewart was asked in mid-2005 what it would take to beat Carmichael outdoors, his answer was “a 450.”

He had one in 2006, and he and Carmichael logged some epic motos at the start of the season. Stewart edged Carmichael at the Hangtown opener, but then Stewart crashed huge battling for the lead at High Point, and then again when his bike blew up over a jump at Southwick. By mid-season, Carmichael again had a big points lead, but Stewart got some mojo going again and won an epic duel at Washougal. The next race was Millville. In the first moto, Stewart and Chad Reed jumped out to an early lead with Carmichael working his way up to third. Stewart would crash in the sweeper before what is now known as the Chadapult, and then later on Reed’s header pipe would fall off causing him to lose a bunch of power and speed on the track. Carmichael inherited the lead and won the moto.

Another battle loomed in moto two, but a spoiler joined them: Mother Nature. A massive storm invaded the track mid-way through the final Lites (250) moto of the day (won by Suzuki’s Broc Hepler), and the Millville track was a muddy mess by the time the Motocross Class (450s) rolled out for moto two.

In the early days of Carmichael’s pro career, he was not known as a very good mud rider, but he fixed that in his latter years. He grabbed a very-important holeshot in moto two ahead of Stewart and stayed clean while the rest of the field immediately started trashing their goggles. For example, Reed had to quickly hit the mechanics’ area to get new gloves and goggles, and soon Carmichael had lapped him.

One small uphill changed this race completely. Carmichael made it up, but Reed and a few other lapped riders did not. By the time Stewart got there in second place, now well behind RC, there was nowhere to go. Stewart tried a new line and pinned it, and he crashed right into his good buddy Reed, who was already stuck. For several minutes, two legends were sitting there stuck together on a muddy hill.

As our David Pingree, then the color commentator for the Nationals TV broadcast, said, “How over it are those two guys? What are you doing? I’m stuck, too. This sucks.”

Stewart and Reed were eventually joined by our own Jason Thomas on the hill. David Vuillemin managed to make it up to take over second place, and even pumped his fist for the crowd, which had now gathered around the mud pile like old-school Blackwater 100 fans. Stewart gave them a show by dropping way off the track, giving it a run and trying to blast his way to the top. He crashed again. The race had come apart, as one relatively small, but very, very slippery uphill trapped nearly everyone.

Carmichael continued to motor around relatively unfazed by the mud. He had lapped a ton of riders, and soon the fans started to realize the impossible was going to happen. Vuillemin, in second, was now within sight of Carmichael, who at times was said to be 20 seconds a lap faster than everyone else. As the white flag loomed, Carmichael closed on Vuillemin, the fans started roaring, and then he passed him to officially lap the entire field. The fans went crazy, and kept cheering his efforts for the rest of the lap, knowing they had just witnessed history.

“Carmichael is still doing the jumps!” said Pingree. “Someone needs to hit this kid on the head and tell him to chill out.”

“Yeah, you know, I’d be ashamed, but that’s Ricky and he’s unreal,” said Vuillemin of finishing second yet also getting lapped. “I’m kind of a little ashamed but in a way I was happy, I was getting a little tired and that was one lap less for me!”

“I just wanted to do it,” said Carmichael. “I’ve never done it and I just thought as a motocross racer, man, that would be unbelievable. So I just kept driving, driving and was able to do it. Just super, super pumped!”

Lapping the field. Yet another Nationals record for RC that might never be threatened.